Impressions on the 2017 Ski-Doo 850s and Yamaha Sidewinder

Ski-Doo and Yamaha’s newest and fastest sleds made an impression on us.

Obviously the power and speed of certain model year 2017 sleds stand out. There’s no getting around the fact that this crop of new snowmobiles sets a modern standard in straight ahead sled performance. When you can run 70-plus miles per hour down a straight, slam the throttle to the bar and feel the track break free to spin freely… well, it catches your attention!

The two most impressive offerings had to be the new turbocharged Yamaha Sidewinder (and Arctic Cat counterparts) and Ski-Doo’s 850 MXZ and Renegade offerings. For 2017 you can order 13 variations of Yamaha’s Sidewinder turbo. Cat has another 10 iterations in various nomenclature, track lengths and suspension set ups. Ski-Doo plays it a bit more conservatively. There are only six 850s and only three of those are available for in-season purchase. Like the competition, the premium versions of the 850 MXZ, Renegade and Summit have to be ordered early. But, you might want to do that as each sled maker — Ski-Doo, Yamaha and Arctic Cat — fit some premium pieces to their new high performance sleds. 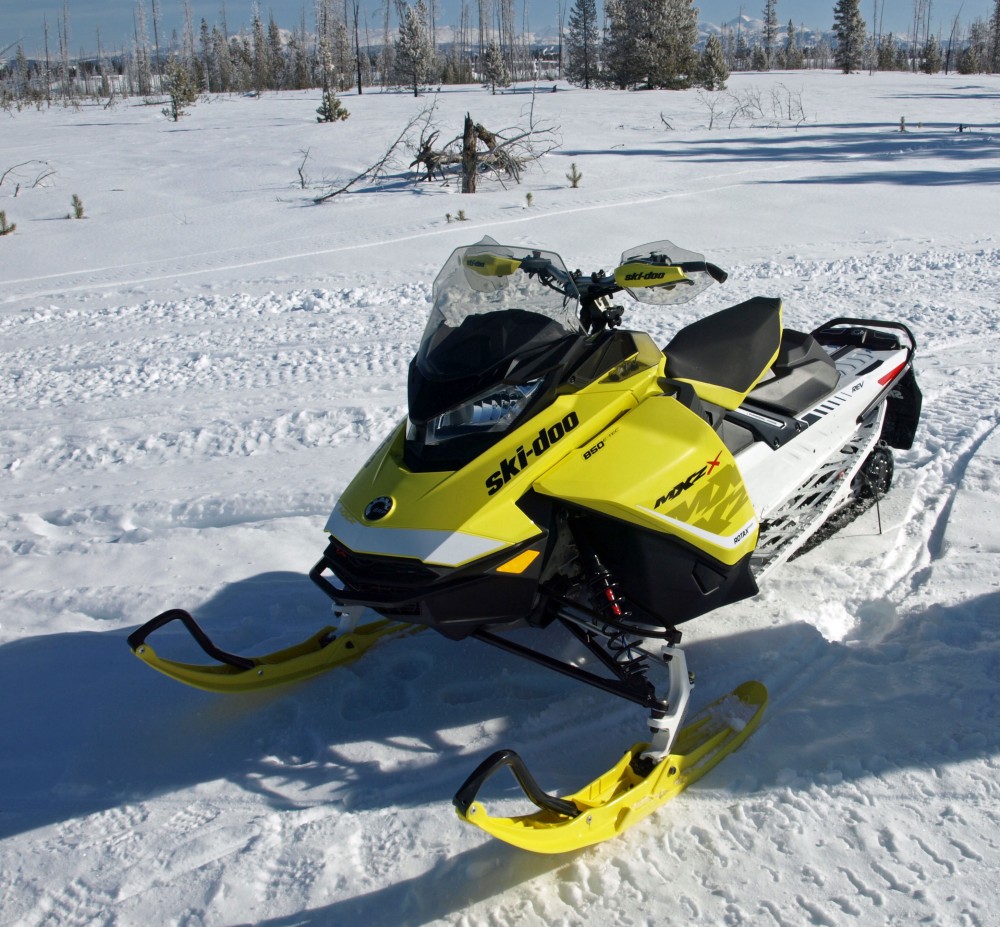 Styling for the GEN-4 series of Ski-Doo models brings in a sense of the pioneering manufacturer’s heritage.

Of the three sled builders, we give Ski-Doo the edge in “most” new as its 2017 top of the line models feature an all new fourth generation chassis as well as that brand new 850cc two-stroke Rotax twin. We’ll have to see how things shake out in the market place, but in the early going, we suspect that potential buyers will see the 180 horsepower numbers of the Yamaha/Cat turbocharged 998cc four-stroke triple and it will trump the 165-hp output of the Ski-Doo. Of course, there will be the argument of power-to-weight and, while valid, the Yamaha turbo’s power advantage can counter Ski-Doo’s claimed lower weight. 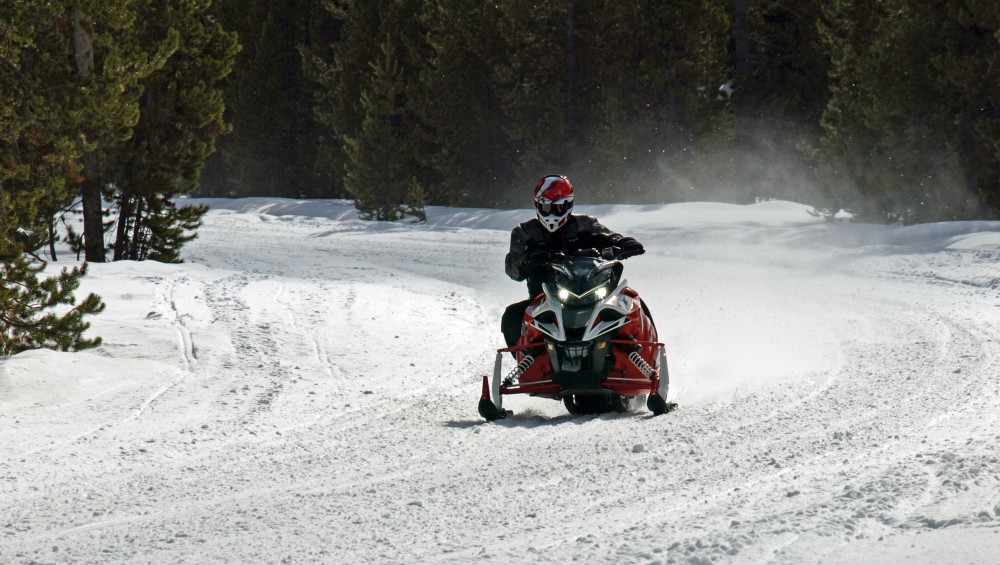 Based on horsepower numbers and actual seat of the pants experience with both the Ski-Doo and Yamaha turbo, we readily admit to trying the two brands head to head at every safe occasion we could and the results were clear. The Yamaha turbo wins, even when the Sidewinder rider got a poor holeshot to a cagey Ski-Doo rider. The Ski-Doo is extremely stout from mid throttle to wide open, but the turbo more than matches that and is extremely smooth all the way across the power band. We give the edge to the Yamaha Sidewinder versus Arctic Cat’s similar Thunder Cat, as we felt that the new YSRC Yamaha clutching on the pre-production models we rode shifted out and interacted better with the 998cc triple. Advantage, Yamaha. Been quite a while since we’ve been able to say that, but for model year 2017, Yamaha delivers the power to satisfy. 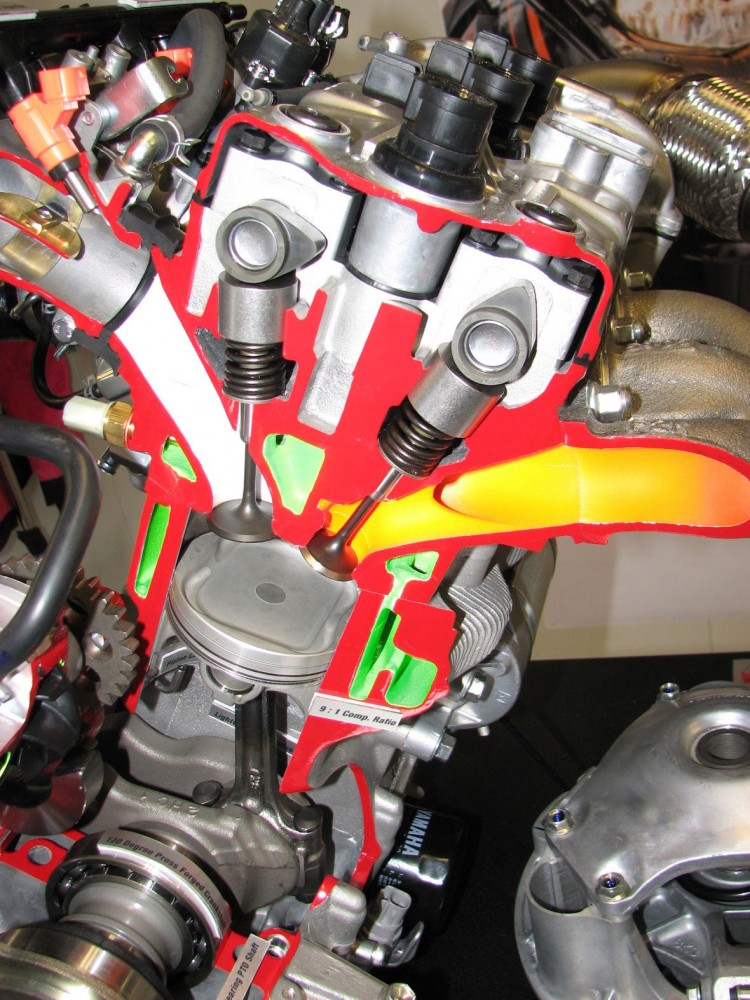 While our impressions of power favor Yamaha, we would be remiss if we didn’t share our overall feelings of the two newest of the new sleds. Where Yamaha and Arctic Cat worked with existing platforms — ZR, XF and M — to fit a new turbocharged drive system, Ski-Doo started fresh and developed the chassis and engine contemporaneously. The entire 850 Summit, MXZ and Renegade packages work together and it’s noticeable. Our Western Editor and test riders have been quick to reflect on the intuitive nature of the Summit; how it almost seems to feel what you want it to do before you lay instructions to it. The trail-based MXZ and Renegade 850s impart new degrees of handling balance, especially in side to side action. As Ski-Doo engineers explained to us, they were satisfied with the fore and aft balance of the previous REV chassis, but knew they needed to work on the side to side balance. That meant the engine became narrower and the engine placement went from being heavier on the clutch side to nearly neutral with the 850 engine placement. Likely you wouldn’t notice the change unless you came off an MXZ 800 and went directly to the MXZ 850. But, it’s real and handling is improved. 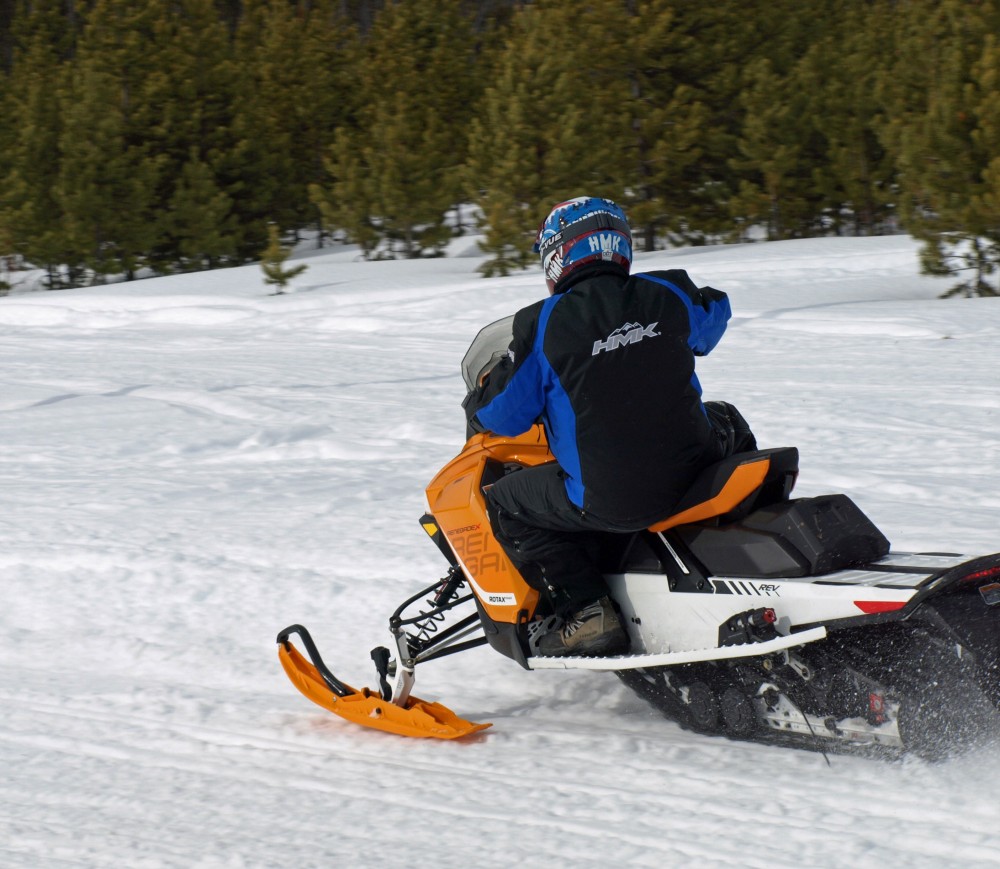 Like the Yamaha and Arctic Cat turbo models, the Ski-Doo 850 reflects changes in body work, but it was done in concert with the new platform, which brings an “open” toe hold concept to the design. We’re guessing that this was created to favor the wants and needs of powder riders. Based on the fact that Ski-Doo recently has made a point of releasing information about various “toe hold” options, we suspect there may have been some dealer and consumer blow back on the concept. Not to worry, the options do, indeed, let you tighten your foot hold on the sled even better than previous REV chassis designs. We prefer a tight toe/foot hold that allows us to lighten our grip on the handlebar. 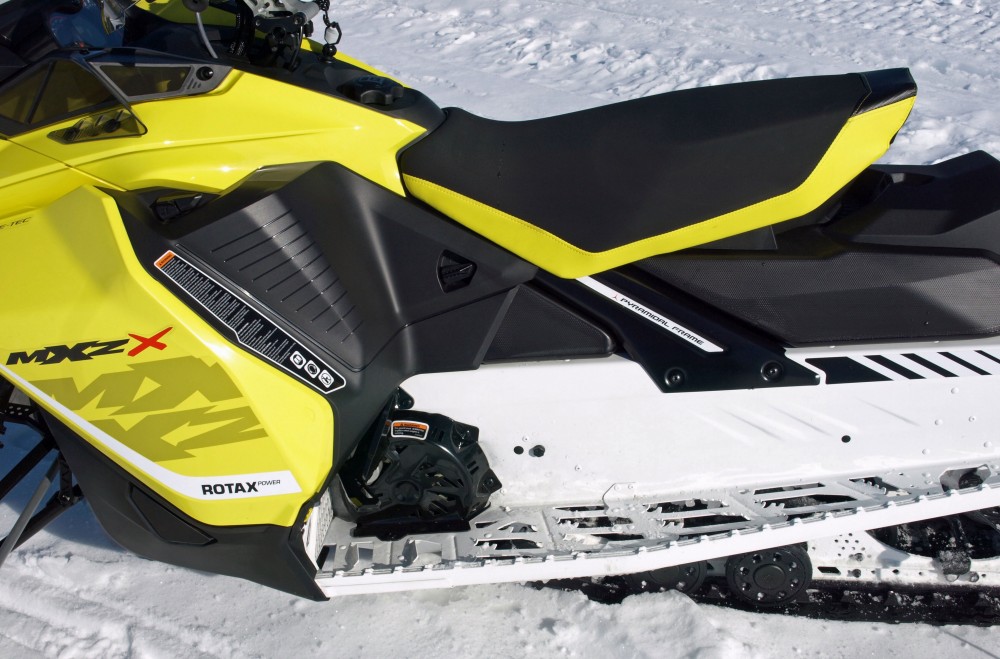 Ski-Doo’s Gen-4 platform features an “open” toe hold, but there will be ample options available that allow you to customize “locking” into the sled.

But, this is not the first time Ski-Doo designers have gone with an “open” foot hold concept. The Everest and original trail Blizzard of the 1970s and 1980s came with a flat foot platform and minimal side panel to keep your feet from flying outward off the runningboards when running down rough trail sections. We figured that this had to be a reflection on the where Ski-Doo’s engineers rode. The smooth super trails of Quebec didn’t require serious riders to “lock in” like riders who ran the ditches of the Midwest outside Roseau and Thief River Falls. Both Polaris Indys and Cats came with toe bars that let you lock in. These were especially handy when hitting and flying over driveway approaches during the old Winnipeg to St. Paul endurance race of those times. Once Ski-Doo got serious about such cross country racing, secure foot holds found their way onto the performance sleds that replaced those Blizzards. For now, though, trail riders can order the optional foot hold accessories and custom-fit their boots for a secure onboard ride.

One of the things that we especially like about the new fourth generation REV platform is how the parts and accessories engineering staff were integrated into the vehicle’s design. You can add pieces from the Ski-Doo catalog that have been specifically styled with the Gen-4 platform to give it a factory-custom appearance. From nuanced lighting accents to a Garmin GPS system to a seemingly overwhelming assortment of LINQ bags, racks and such, you can custom fit a brand new MXZ 850, Renegade 850 or Summit 850 to your fussiest and most specific ideas of what “your” sled should be. 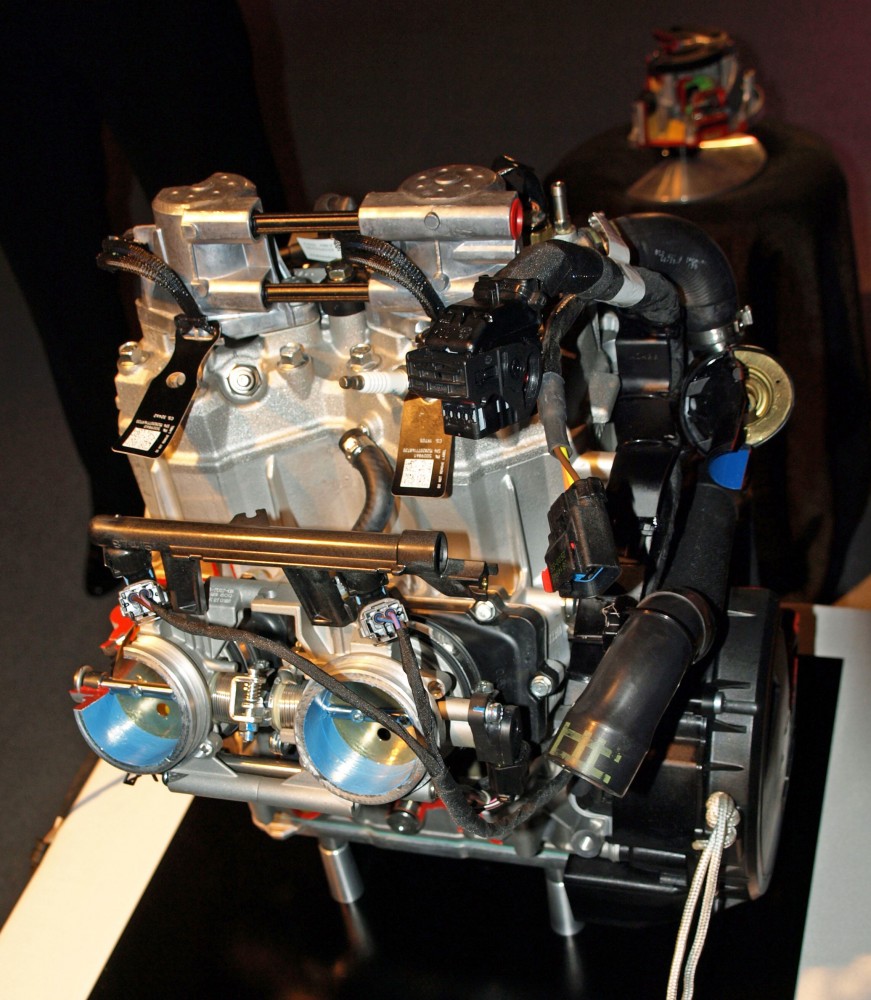 Ski-Doo and Rotax engineers worked together to create the all-new series of 2017 REV Gen-4 platform powered by this new 850cc ETEC twin.

But, as we said, Ski-Doo, which truly offers a most excellent new GEN-4 snowmobile with a powerful new high-tech 850cc two-stroke may get downplayed in the early “wow-ness” of the Yamaha turbocharged triple. Yes, indeed, there is definitely a Wow-factor with the Yamaha turbo, especially when you finger the throttle trigger for the first time. Just tickling the throttle will easily and almost imperceptibly run you from a casual 40 mph right up to 70-plus. The Ski-Doo can run you up as well, but you’ll be more aware of the change once you hit the 850’s “boost-like” charge around mid range to wide open. 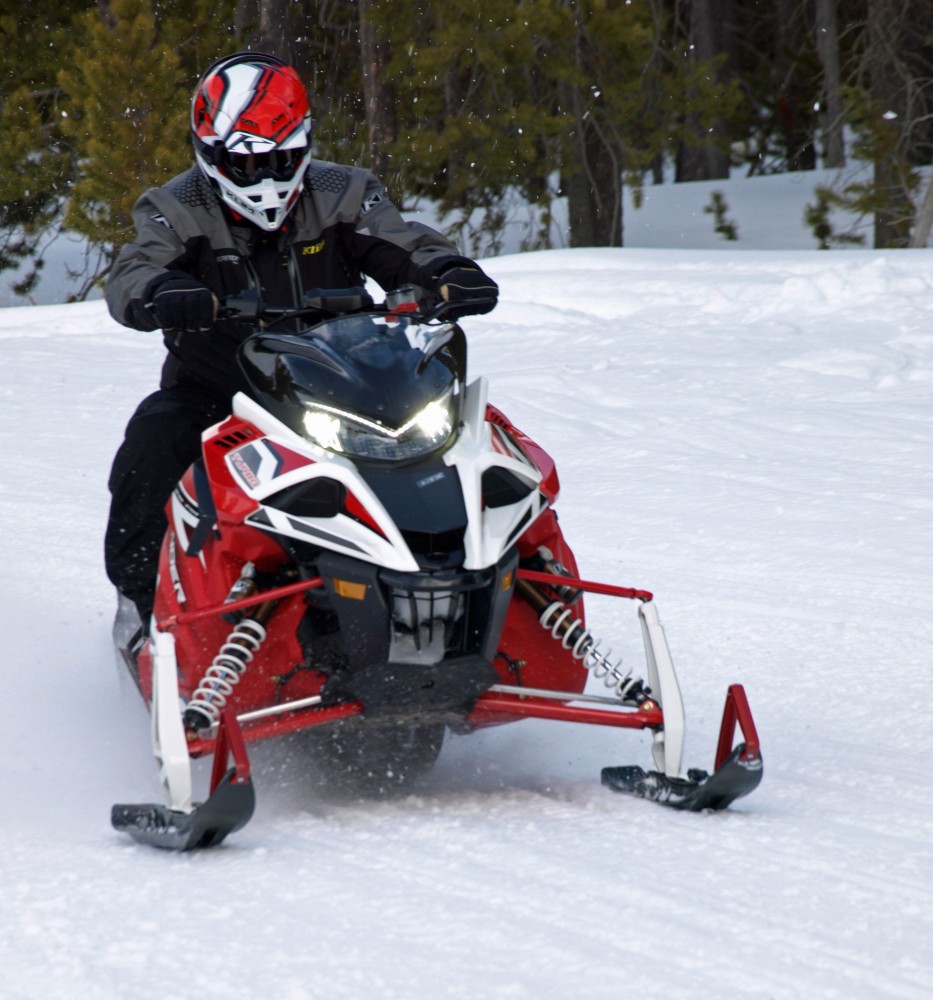 Note how the Sidewinder reacts from a standing start as weight shifts off the ski and transfers to the rear for improved grip.

Impressions? Oh, yes. If you hit the Yamaha turbo throttle full on, it’s best to tuck your helmet’s motocross style visor down low and pay attention to where you need to start braking. The Sidewinder gets to 100 miles per hour quickly and can leave you with another 20 percent or more if you have a large enough throttle thumb and run out. The 850 Ski-Doo will get you to triple digits, too, just not as quickly, but we prefer its overall handling. Those are our impressions and we’re sticking with them.

Addendum to Impressions of Ski-Doo 850 vs Yamaha Sidewinder Turbo

A brief note to us from concerned Ski-Doo representatives pointed out that we were quite remiss in not accounting for the fact that our ride evaluations in West Yellowstone were conducted at an altitude of 6,600 feet above sea level. The relevant point being that we neglected to point out the fundamental bearing on performance that such altitude has on normally aspirated two-strokes like Ski-Doo’s new 850 E-TEC. In this case, that 6600 feet of altitude would have robbed all normally aspirated engines of 21 percent of their power versus their sea level ratings.

Doing some simple editorial-type math, the Ski-Doo 850’s claimed 165 horsepower rating at sea level would be down 34.6 horses with such a 21 percent decrease, leaving it producing about 130hp for our ride evaluations. Since the Yamaha Sidewinder’s turbocharger can make up for altitude by simply supplying more air to the engine, its power remains virtually constant at 180hp whether at sea level or 6600 feet above sea level.

We were admittedly remiss in not considering these facts and may have mislead you readers in this regard.  As Ski-Doo’s spokesman pointed out to us, “This is misleading and completely unfair to your readers and us as OEMs. The turbo sleds are fast – we all understand that – but what you experienced in West Yellowstone will change significantly in MN, WI, MI, ONT, QC and NY.”

We did miss the altitude conundrum. Horsepower is horsepower, with some corrections for altitude. The fact is that the Ski-Doo 850 proved quick off the line and even with the challenges of West Yellowstone’s altitude was not embarrassed at top end.  – Jerry Bassett