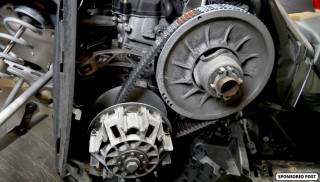 As powersports enthusiasts who love to squeeze the throttle and explore, we expect a lot from our continuously variable transmission (CVT) belts. Most riders want to hit top speed all day long, cover tons of ground and still make it home at the end of the day, which is why choosing the right belt is so important. As the main transfer point of power from engine to drivetrain, the belt in a CVT is crucial for performance, and that’s why you should look the Gates G-Force RedLine for your next belt.

The first question to ask is when should I replace my belt? The answer to this could be obvious if your current belt breaks, but it’s also important to do regular inspections of your belt looking for fraying, chipping, cracking or any other visible signs of wear. It you spot any issues, it’s better to swap that belt out to ensure reliability, and that’s where the Gates G-Force RedLine comes in.

Gates uses a laser scanning process to make sure its replacement belts are exactly the same size and shape as your original belt. Thanks to its patented Ethylene Elastomer (EE), axial stiffness on the G-Force RedLine is also maximized to provide longevity and better performance than the OEM belt that came with your machine. In fact, Gates boasts that your acceleration and top speed will be improved simply be swapping to one of its G-Force RedLine belts.

In our case, we changed the belt on a 2015 Ski-Doo Grand Touring 1200, a process which will be similar on most newer Ski-doo models. Of course, the Gates G-Force RedLine belts aren’t only good for snowmobiles, so keep Gates in mind for your side-by-sides and ATVs as well.

It starts by removing the side panel from the Ski-Doo and the belt cover for easy access to the clutch. A small r-shaped tool is going to be crucial for this process, and it will be provided inside the manufacturer’s supplied tool kit. You’ll want to find the threaded end of that tool, and begin to screw it into the small threaded hole on the front of the secondary clutch. This will begin to spread the sheaves on the secondary, allowing the belt some room to move. Once fully opened, you’ll simply want to slide the belt off, starting with the secondary clutch and then the primary.

Once you get the old belt off, make sure to clean the sheaves. Leaving dirt and debris in there could greatly shorten the lifespan of your new belt.

Now you can reverse the process with your new Gates G-Force RedLine; simply slide it over both clutches until it’s back in position. This belt is directional, so to ensure you have it installed the right way you should be able to read all of the words on the belt when it is installed. Also, be sure to never bend or kink the belt during installation, as this will compromise its performance. And just in case there is a manufacturer defect, Gates provides a one-year warranty on all its belts.

Now you can back the tool out of the clutch, and watch the sheaves tighten down on the belt. Once the tool is removed, work the belt back and forth with your hands until it’s back at the top of the clutch and the sheaves have closed fully. This is an important step to make sure your clutch operates properly the first time you go for a ride. Reassemble your hood and belt guard, and you’re almost ready to ride!

We say almost ready to ride3, because you can’t forget your break-in procedure.

Gates says you have to perform two full heat cycles with this belt to prepare it for active duty. To do so, take your machine for a nice gentle ride and get it up to operating temperature, never going over 3/4 throttle. Once fully heated up, take your machine back to the garage and park it for at least 30 minutes or until the belt has fully cooled. Jump back on and repeat the process. That will take care of your two heat cycles. Once completed, you’re ready to hit the trail, squeeze the throttle and feel the performance from your new Gates G-Force RedLine belt.

Keeping your drivetrain operating at peak performance for loads of fun miles on the trail is what belt maintenance is all about, so next time you pop your hood to change out your CVT rubber, make sure you grab a Gates G-Force RedLine.