It’s starting to look like nobody can stop Tucker Hibbert on a snocross track this winter. The Team Arctic racer swept the Pro classes Piranha-X Western National presented by Fly Racing during the third round of the AMSOIL Championshp Snocross Series in Sandy, Utah. Hibbert is now unbeaten in six Pro finals this season.

Ross Martin (Polaris) has been the quick starter at most of the rounds so far, but in this weekend’s Pro Super Stock final it was Bobby LePage who jumped to the lead on his LeVallee Racing Polaris. This came on the heels of a first lap red flag restart that saw several riders pile up on the back straight. Once in the lead, LePage stretched his margin with Martin in tow. Midway through the final, Martin worked his way by LePage, while Hibbert began his charge.

Closing in on 10 laps to go Hibbert worked his magic again, moving by Martin and sailing off for the win. 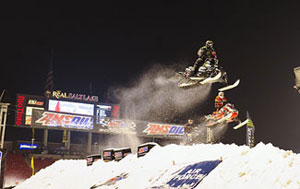 Tucker Hibbert flies high on his way to victory.

“It feels so good to walk away from Utah with both pro wins,” says Hibbert. “I came into this race determined to win after losing the Open final here (Rio Tinto Stadium) last year.

“Racing on natural snow was a challenge. It sounds weird to say that but the consistency of natural snow is a lot different than man made snow. It made the track unpredictable and kept me on my toes.”

Martin held on for second, LePage scored a well-deserved podium in third and Robbie Malinoski (Ski-Doo) won the battle for fourth after dueling throughout the race with Tim Tremblay (Ski-Doo). 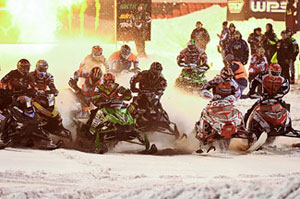 TJ Gulla grabs the holeshot in the Pro Open final.

In the Pro Open final TJ Gulla edged out Malinoski for the Stud Boy holeshot award. Malinoski quickly raced passed the National Guard/Polaris rider on the back straight and looked to be on his way to his first win on the season. Gulla, Tremblay and Hibbert swapped positions during the early portion of the race. Hibbert once again put his superior line-choosing abilities to work. One by one he picked off Tremblay, Gulla and Malinoski, finishing the job with relative ease.

Tremblay, who battled with Malinoski several times during the weekend, was able to maneuver his Warnert Racing/Foremost Insurance/Ski-Doo to second, while Malinoski managed to keep the final step on the podium.

With a single day format the Semi-Pro riders squared off one time for the money with Mike Bauer going wire-to-wire on his Judnick Racing/Jack Link’s Beef Jerky/Polaris. Bauer also had to endure a red flag restart but kept his composure and raced off to a convincing win.

Arctic Cat’s Cody Thomsen maintained second, while teammate Kyle Pallin and Polaris mounted Andy Leiders battled for third and fourth. Pallin would have issues that dropped him back, enabling Leiders to seal the final step on the podium.

Andrew Johnstad found his way back on to a superstar Polaris team as he will fill in for Levi LeVallee for the rest of the season.

Brett Turcotte was back at the track after a training incident that severely damaged his thumb. Turcotte was only taking starts to keep his points total on track but expects to be at full speed in New York.

Next up for many of the ACSS snocrossers is the 2011 Winter X Games on Jan. 27-30 where Hibbert will be looking for his fifth straight gold medal. The next ACSS event is the Vision Kia Eastern Nationals in Farmington, NY. on Feb. 4-5.