Monster Energy/Arctic Cat’s Tucker Hibbert proved to be basically untouchable in the opening round of the AMSOIL Championship Snocross Seriess (ACSS) in Duluth, Minn.

Picking up where he left off last season, Hibbert remained undefeated by winning all four of his qualifying races and both pro main events. He had to fight for his win Saturday night in the Pro Super Stock final after pro rookie and fellow Arctic Cat rider, Dan Ebert, took the holeshot and early lead. Hibbert made the pass on Ebert at the halfway mark of the 22-lap, 20-rider main event. Ebert held on for second with Garth Kaufman rounding out the podium, making it an all Arctic Cat sweep.

With the sun setting Sunday afternoon, pro riders geared up for the second pro main event of the weekend. Flat light along with freezing temperatures caused extreme snow dust, making it nearly impossible for riders to see in the Pro Open final. Known for his ability to read lines, Hibbert rode flawlessly and never backed down for his 48th pro win in what he called “the scariest race of his career.” 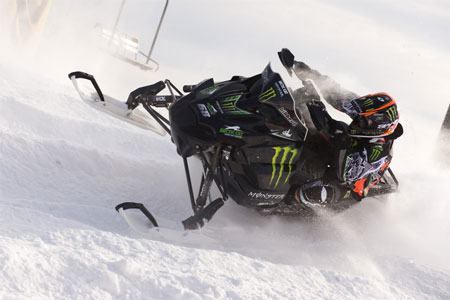 Tucker Hibbert continues to prove that he’s the best snocross racer on the planet. (Photo by John Hanson)

“Things couldn’t have gone any better this weekend. I felt really confident going into this race but you never know what’s going to happen at Duluth,” says Hibbert. “My Monster Energy/Arctic Cat was unbelievable and I felt strong the entire weekend.

“The Pro Open final was the scariest race of my career. I couldn’t see who was in front of me, behind me or beside me. I just tried to race off of memory and prayed for the best! All of the long hours preparing and testing paid off. It’s a good feeling going into a race knowing that you’ve done all you can. This is a great way to start the season!”

Polaris racers finished 2-3-4 in Pro Open, led by second-place finisher Ross Martin who missed the second half of last season with a severely injured hip. Martin showed he is back in top form on his Polaris IQ race sled as he was the runner-up in Pro Open and finished fifth in Pro Super Stock. Martin was joined on the Pro Open podium by Levi LaVallee, who finished third. Robbie Malinoski ran strong in his first race with a new team and finished fourth. Ski-Doo pilot Emil Ohman rounded out the top five.

Plenty of yellow flags and extremely tight racing highlighted the 16 laps of the first Semi-Pro final of the season. Mike Bauer (Polaris) raced strong off the start and led the majority of the race to finish in first at the podium. New Arctic Cat rider Kyle Palin finished second, while Chris Kafta (Polaris) was third after being the top qualifier.