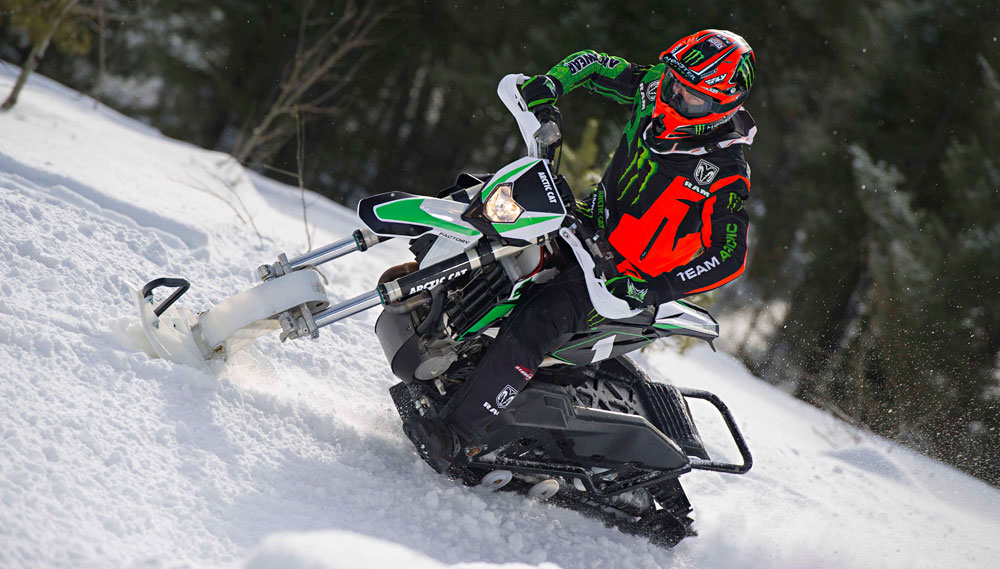 An authentic snowbike from a snowmobile pioneer

The Arctic Cat SVX 450 snowbike is getting closer to production. Though we haven’t been able to ride it yet, we have learned a little more information about it.

Arctic Cat is the first manufacturer building its own, from-the-ground-up, snowbike in concert with Camso (formally known as Camoplast). “Now hold on here,” you may scold us by declaring Polaris was the first with the Timbersled Mountain Horse snowbike. No, Polaris is not. Polaris acquired Timbersled which builds snowbike kits for existing dirt bikes – KTM, Suzuki, Yamaha, Kawasaki, Beta, Honda, and Husqvarna. 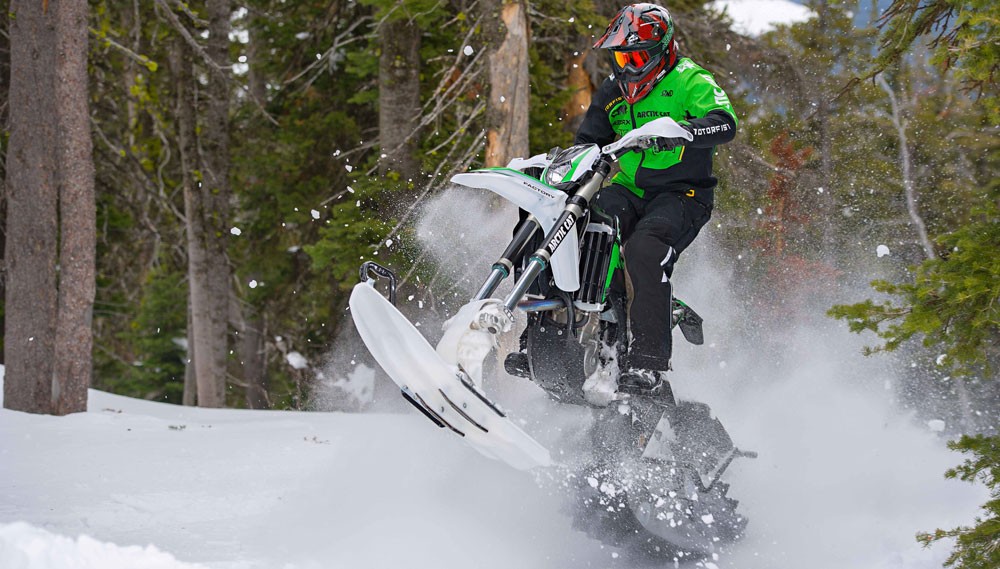 Test pilot Dave McClure is one of the very few to have actual saddle time on Arctic Cat’s new SVX 450 snowbike.

Arctic Cat, on the other hand, is building its own snowbike – not a snowbike kit retrofitted to mount on an existing frame. This is a new product-venture for and from Arctic Cat. Thus, Arctic Cat is taking its own approach, in that the Minnesota company is working with Camso to build this soon-for-production (?) snowbike.

The motor in the SVX is a 450 single cylinder four-stroke electronic fuel-injected (EFI) motor. The front and rear suspension, as well as the track, is meat and bones to joint engineering and design collaboration and venture between Arctic Cat and Camso.

Although Arctic Cat and Yamaha have a collaborative relationship on snowmobiles, the two ski-steered kind, this snowbike is not a collaborative effort between them. When we spoke with the media relations folk at Yamaha Snowmobiles U.S.A, they made it clear, Yamaha has no part in the Arctic Cat snowbike. Likewise, Arctic Cat made it known, they did not involve Yamaha on this venture. 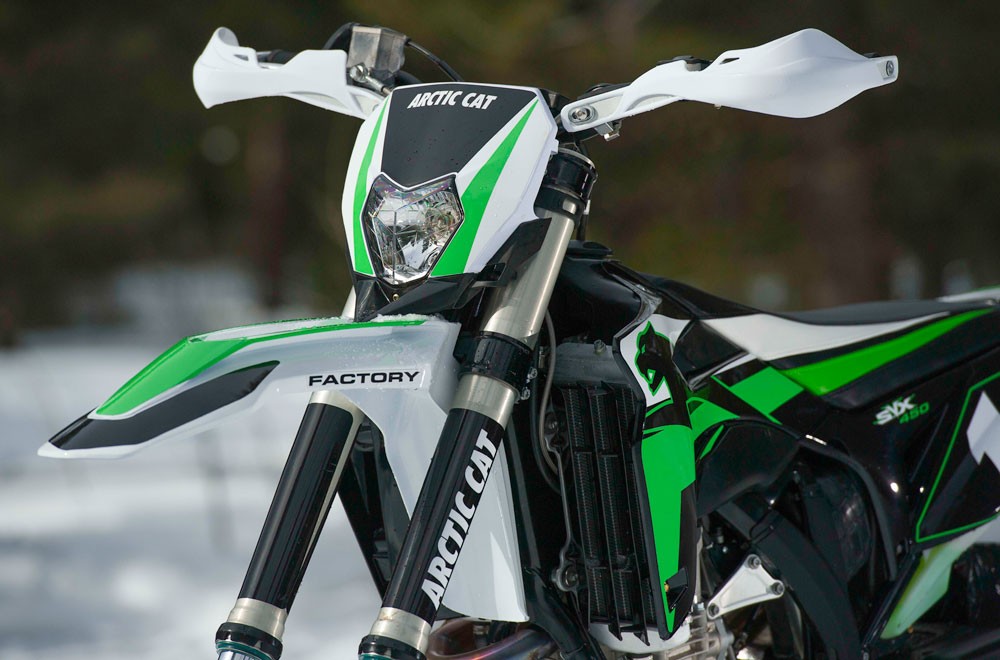 Cat’s plan is to utilize an as-yet-undisclosed motorcycle 450cc single cylinder fuel-injected four-stroke for its power source, but it will not be Yamaha, despite its current collaboration with snowmobiles.

Why is Arctic Cat venturing into the snowbike market? Arctic Cat feels that wintertime snow-filled motorized recreation is diversifying. Credit the early pioneers, 2Moto and Timbersled.

Back to the diversification. Arctic Cat claims to have studied its customer base, looked at the amount of snowbike kits sold and learned from its research that a snowbike kit adapted to an off-road dirt bike is, according to Arctic Cat, a mission of compromises. Cat then set out to design and build a snowbike that is not an adaptation, but a snowbike designed and engineered from conception to be just that, a snowbike. 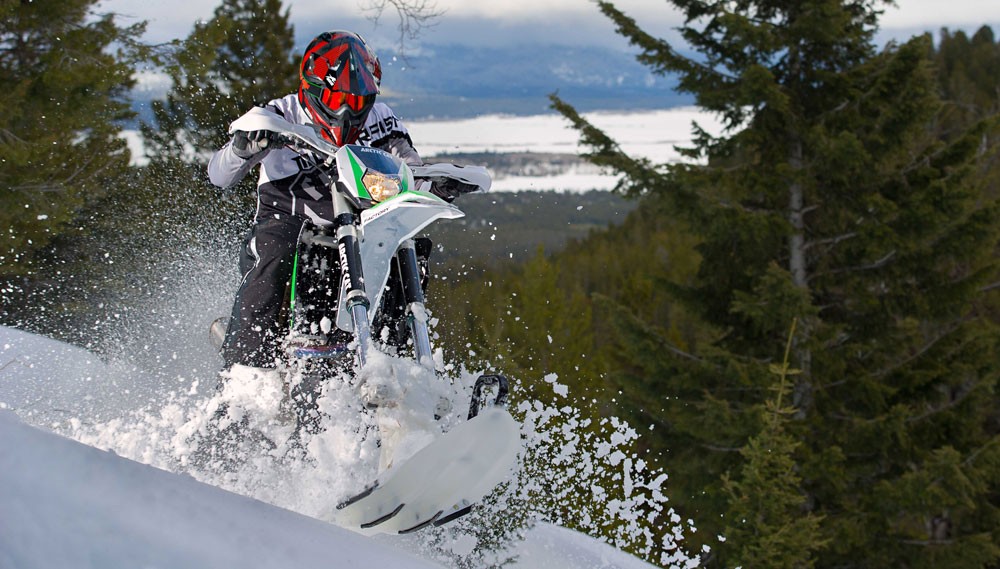 Cat test pilot Rob Kincaid powers across a hill side.

Furthermore, Cat also learned that dirt bike riders are beginning to purchase one used dirt bike to run a snowbike kit, and another (perhaps new) dirt bike to keep the wheels on it. That formula could be reversed, new bike for winter, used bike for wheeled action. Basically, the one-bike-for-all-seasons mantra is slowly dropping off as many are not akin to the tinkering of swapping out the snowbike kit for two tires and vice versa twice a year.

From what we understand, the SVX 450 is not a snowbike that will come with an optional front tire attachment kit, a rear tire and a rear suspension swing arm kit. This information is preliminary as Cat has the right to change the SVX 450’s mission as the project progresses. 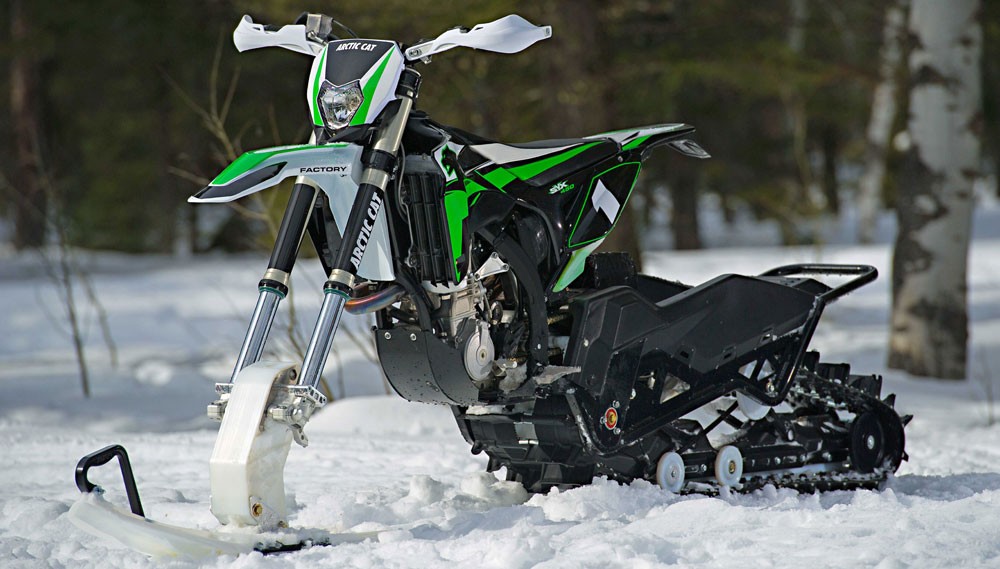 Arctic Cat optimistically plans to introduce its snowbike concept to flatland riders as well as powder riders by making the bike stable and easy to ride in trail settings.

But what we know so far, an SVX 450 purchaser can’t order from Arctic Cat an accessory kit to convert the “bike” to be a single track or desert use off-road dirt motorcycle. Again, Arctic Cat has the right to change this as the information given to Snowmobile.com is early, and we respect that. What you need to understand is that Arctic Cat as a company is exploring, venturing, and not standing still when it comes to satisfying off-road motorized recreation wants, desires and needs.

Arctic Cat expects to begin building and selling a limited number of SVX 450 snowbikes this Fall. They are cautiously optimistic in filling orders to select dealers. After this, the program will expand.

We have not bonked any snow-capped mountains on the SVX 450, but Artic Cat assured us, the time will come when we snowmobile journalists can ride it. We have scrubbed the SVX 450 clean with our hands, camera and questions to Cat’s media relations personnel and its engineers, but have no first-hand experience on its performance. However, Rob Kincaid, Dave McClure and Tucker Hibbert have spent time on it and have posted their opinions. 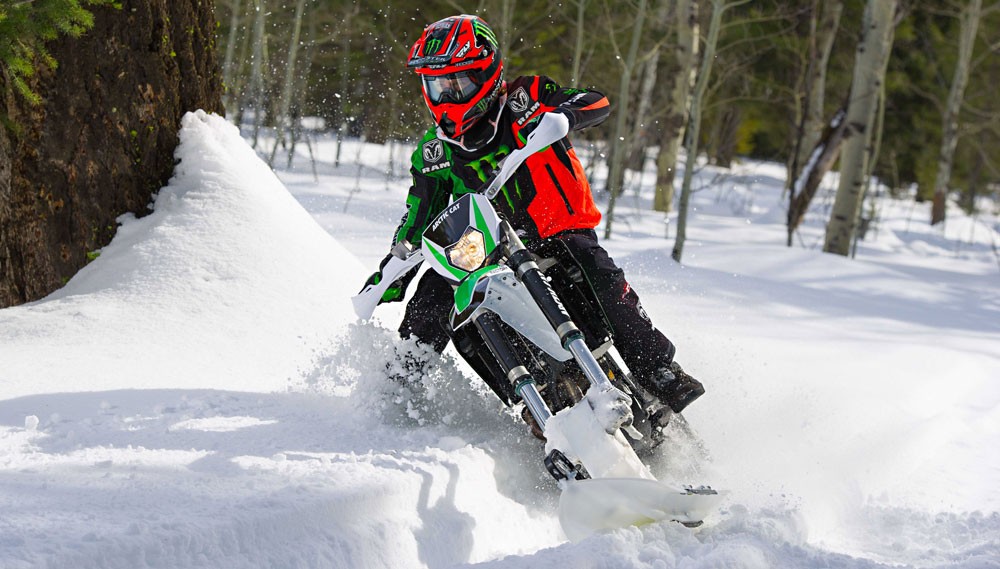 For several years, we have tested and ridden snowbikes, mostly Timbersled Mountain Horse snowbikes (Yamaha-, Kawasaki- and Honda-powered). Additionally, Jake Allred, who contributes photos and freelance articles for Snowmobile.com, has ridden the SnowTech MX (www.snowtechmx.com/XXX) snowbike, West Haven, Utah, and has found this bike kit to be fantastic.

Here is all we have from Arctic Cat – officially:

“Snowbiking is a growing sport across western North America. Arctic Cat’s patented SVX 450 is designed to provide an exciting new experience for riders who want the lightest, most affordable vehicle for mountain riding.

“The development of the SVX 450’s revolutionary single-beam skid frame was a collaborative effort between Arctic Cat and Camso – the industry leader in track designs – to be lightweight and agile, and provide traction on the steepest hills and backcountry adventures. The front precision-engineered ski complements the rear suspension, providing the maximum amount of flotation in deep snow and accurate handling and control on the trail, while the powerful 450cc, 4-stroke engine with electronic fuel injection propels the SVX through unchartered snow terrain.” 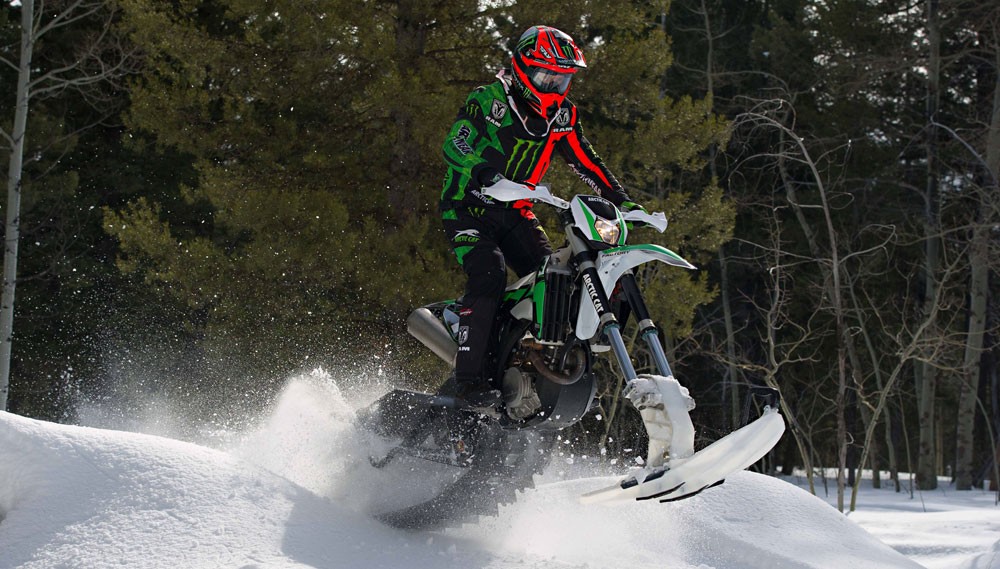 The SVX450 will involve Arctic Cat and Camso engineering, which will concentrate on ski, track and suspension designs.

When we have been a snowbike jockey, we have learned, and conclude, a snowbike on a trail or on hardpack conditions, is not at all fun. Here is where Cat sets to change that mindset, to make the SVX 450 a pleasure to ride on the trail – and stable – as it is in deep powder. Time will tell.

When the time comes for us to ride the SVX 450, we will promptly update you. Given that promise, we applaud Arctic Cat for taking on this venture. The SVX 450 may be the Segway to pull future snowmobile customers into the market; those who migrate from a dirt bike to a snowbike, may migrate to a snowmobile.