Arctic Cat Surpises Sunshine Oelfke for her Humanity and Kindness 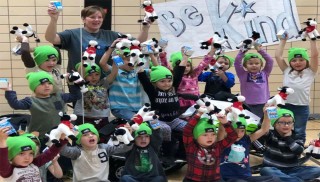 Last week I caught a heartwarming story from my friend Krista Maki-Zurn’s (IWA Champion) Facebook page. She has a five-year old friend/fan named Sunshine Oelfke who calls Krista “Snowmobile Barbie”.  Krista was commenting (and crying) over Jackie Oelfke’s (Sunshine’s Grandma) Facebook post showing Sunshine being surprised by Arctic Cat with a new ZR120 while at school at Birchview Elementary, in Ishpeming, Michigan. Scrolling through Jackie’s photos was heartwarming. While welling up I decided I wanted to have a phone chat with Sunshine and Jackie. Well, I got a treat, we had a Facebook Messenger Video chat! 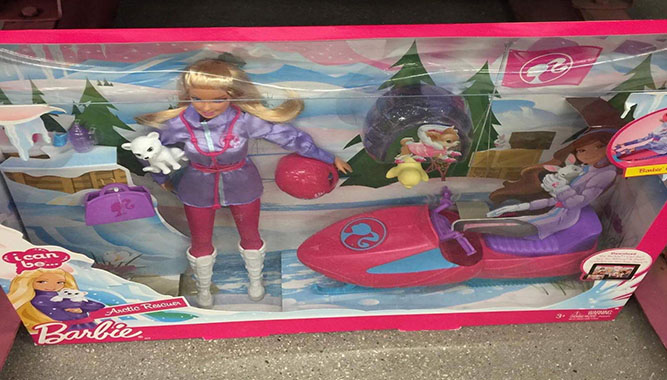 So why and how did this happen?  It’s simple, at five years old, Sunshine is a beacon of humanity and kindness, but there is more to the story.

You see, Sunshine and her snowmobile family moved to Michigan only a year ago, from North Eastern Wisconsin. They have been traveling to the Upper Peninsula of Michigan every year to snowmobile places like Keweenaw Peninsula, Houghton Hancock – South Range, Copper Harbour, and more. Because Sunshine has been snowmobiling since she was one, she decided she needed her own ZR120.  They are a dedicated Arctic Cat family! 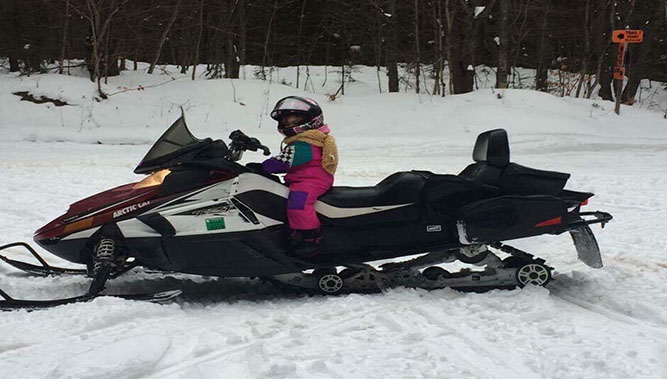 To realize her dream of purchasing a ZR120, Sunshine started saving money in her “Saving For My First Arctic Cat” Piggy Bank. I had to ask, “How did you start saving money, you’re only five?” “Doing my jobs like feeding the dogs, feeding Louis our black “Ar’ctic’ cat, cleaning up my toys, brushing my teeth, and helping my family.” Clearly family values and work ethic run strong in the Oelfke family. Make note she already had $40; I’m learning from Sunshine! 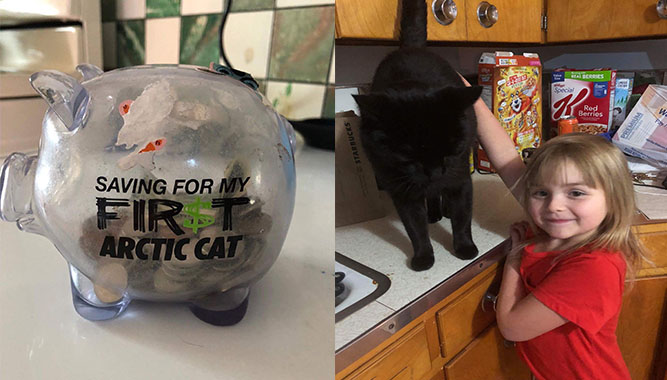 On the evening of October 4th, Sunshine got up from watching Paw Patrol and went to her room. Grandma Jackie wondered why she had left Sky and went to check on her. Jackie found Sunshine emptying her AC piggy bank on the floor, and putting the money into baggies. Surprised, she asked Sunshine what she was doing? Sunshine replied: “At snack-time today, I could tell my friend was sad that her mommy couldn’t buy her milk, so I’m going to buy her milk.” Awwwwwww! 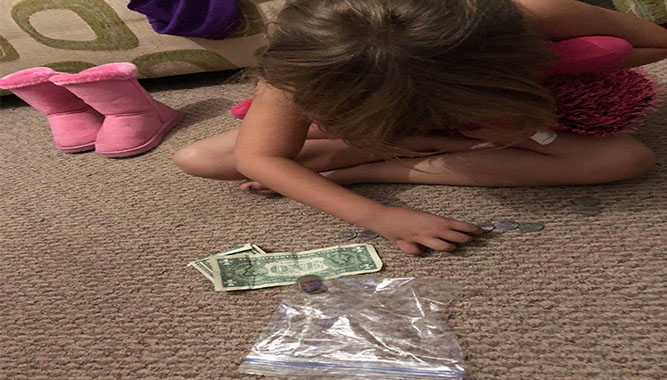 The next morning Sunshine tightly gripped her first baggy of change and wouldn’t let it go. Clearly Sunshine decided that her friend’s happiness was more important than her ZR120 savings. Concerned, Jackie went inside the school and told the story to her teacher, Mrs. Hauser, and they cried together. When Jackie returned to her Explorer she decided to tell the story by recording a video and posted it on her Facebook.

Well Sunshine’s story of ultimate caring, kindness, and putting someone else before herself spread like wildfire. Because of Sunshine’s generosity, people starting asking Jackie what they could do to help. A friend told her about Go Fund Me, so they set-up a page, found here: Sunshine’s Class Milk Money Mission. The list of people that reached out and even reached out to Arctic Cat on her behalf is too long to list, but thank you to everyone. She even made People Magazine’s Human Interest on October 17th! The country and the world noticed, and so did Arctic Cat. 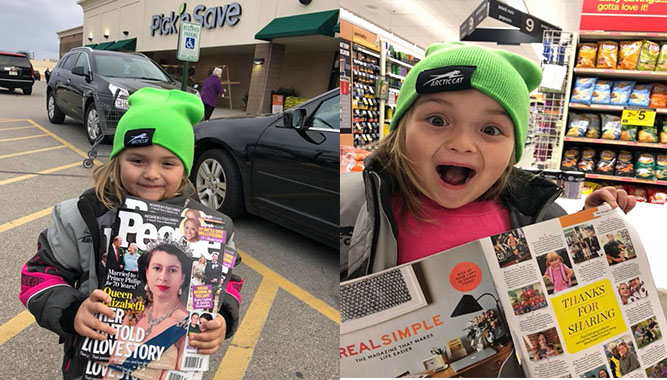 As the funds grew quickly, Sunshine and Jackie wanted to make a donation to the school so that all kids had milk. That’s when Arctic Cat surprised her.

On the morning of November 9th, Sunshine had seen the Arctic Cat trailer outside when she arrived at school. When she entered the gym to present the big cheque there was a small Arctic Cat under a cover. “I think it’s a snowmobile,” said Jackie. “Of course it is, there’s an Arctic Cat trailer with Tucker Hibbert on it outside.” rebutted Sunshine. Little did she know it was hers. It should be noted that the United Dairy Industry of Michigan, Mr. Jalbert former owner of Jalbert’s Dairy, and Kind Snacks of New York also helped make the day extra special with support in their own ways. 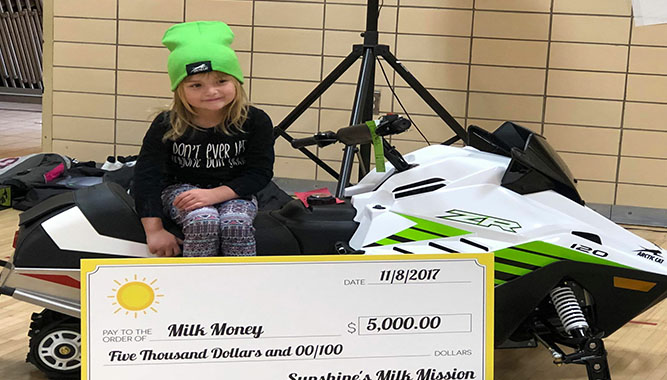 Give and ye shall receive

Not only did Arctic present Sunshine with her new ZR120, they gave all the children toques, and they committed to donating snow gear to the school for those who may not have access to adequate winter gear. 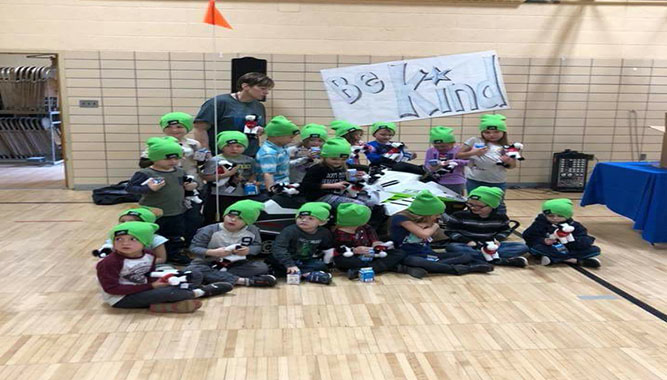 So Sunshine has had her new sled for almost a week. Like any five year old, or any aged sledder for that matter, she’s had some tough days! Grandma said the new sled went directly to their dealer that day for PDI and set-up, a cover, and that was “hard” for Sunshine. Thankfully it snowed and she got to spend some time riding her new snow pony. Here is a link to Sunshine riding her new ZR120, and she’s a great rider: Video: Sunshine Oelfke riding her new ZR120.  I think she’s destined to become a Black Cat.

Sunshine wanted me to thank everyone and wanted a special to mention and thank you to Tucker Hibbert and his wife Mandy for their offer of help, support, and ideas. She said, “They’re really nice and Tucker is really fast!”.

Because Sunshine is such a dedicated snowmobiler she does have her own page, Sunshine Rose. It seems I don’t need to ask people to remember she’s only 5. Psssssst, her Birthday is this Friday, November 17th, and she’s going to be 6! 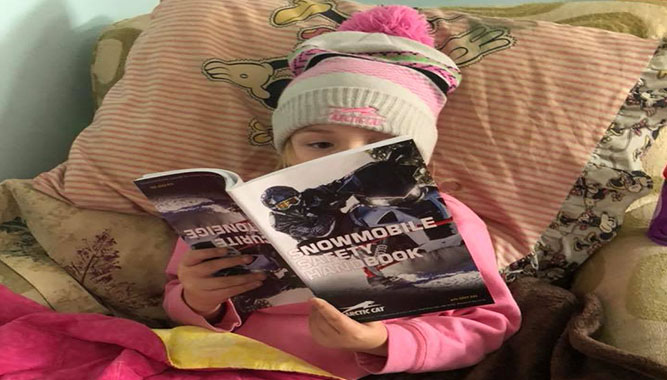 Sunshine & Jackie, I can’t wait for Hay Days 2018 to finally meet you and go visit “Snowmobile Barbie Krista” together, visit some grass drag teams in the pits Sunshine, and maybe you can help me at the Arctic Cat Release! Thank you for your time and laughs.