Traction is a key factor in every powersport, and snowmobiling is no different. Well, there are some differences — most riders won’t be buying a new track every season, which is a good thing, considering the cost. But if you’re looking for more climbing or powder performance out of your snowmobile, consider some of the options available.

Not all snowmobiles are shipped new with a track that is going to be optimal for your use-demand, a phrase that Erik Woog, owner of Alpine Motorsports and Vohk Performance, Kremmling, Colo., takes credit for. Erik has aided in design and development of mountain products and participated in independent product testing and development.

Snowmobilers are a wide and varied group. Snow conditions and terrain varies across the country, and every rider has his or her own riding style and preferences. The right track can make a big difference in your riding. 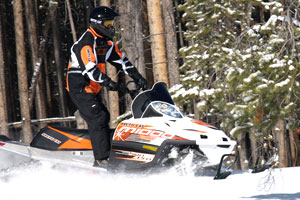 Whether you boondock or ride the deepest powder, there’s a track to match your snowmobiling lifestyle.

There are three basic aspects of track design that affect your choices while shopping for a track to fit your snowmobile. There are a lot more factors to consider for those with highly modified snowmobiles, however; we’ll focus on the basics here.

The size of the track itself is something to consider when selecting the right track for your snowmobile. Most snowmobiles built for mountain use come with at least a 141-inch track, although 144, 151 and 153 are more popular. If you plan to change track lengths, consider the local terrain and your riding style; in the mountains of Colorado, the 153-inch track is popular, according to Woog, while in the more open riding areas of Utah and Wyoming, the 162 is favored. Longer tracks also perform best on big-bore machines.

Remember that while increasing your track length will boost your sled’s flotation in deep snow, you will sacrifice some maneuverability at the same time.

“I think the 153 is the best track length for Colorado riding; the 162 is better at floating, better at deep snow, but as a boondocker, I favor the shorter ones. The 153 is easier to turn, and has a shorter radius in tighter locations. You have to find that balance between maneuverability and flotation,” says Woog. “Everybody falls somewhere on that spectrum.” 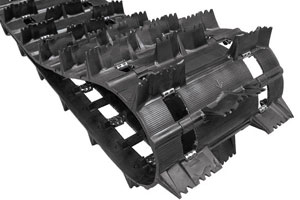 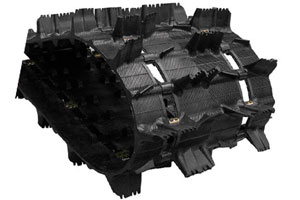 The Maverick track is designed to run in bottomless powder, yet maintaining ‘transit capability’ on hard pack.

There’s a school of thought that ‘bigger is better’, but as with anything else, that only goes so far in real-world applications: too much track can rob horsepower and impede handling.

“You’ll see that generally embraced theory that bigger is better, that longer tracks with taller lugs offer more traction,” Woog says. “But it doesn’t always benefit the rider. A longer track will achieve the desired effect with regard to flotation, but the compromise of handling leaves one wondering whether it’s worth compromising the fun. I’ve heard more often than not that ridiculously long and wide tracks take the fun out of the sled. I think that people need to be reminded of that. A 162 can still be fun. A 174 is really very different feeling.”

The width is, in most cases, determined by what fits on the sled without extensive modifications; however, even if a wider track can be made to fit, it may not provide any advantage to the rider. Snowmobile manufacturers factor the track width into the general handling equation, and often the suspension may be designed to work its best with the factory track width.

“It’s surprising the difference a wider track makes in the snowmobiles’ dynamic. It dramatically affects handling. For example, an Arctic Cat King Cat will easily accommodate a 16-inch-wide track, but it very much changes the handling of the sled. Manufacturers marry the width of a track to a chassis with more concerns other than just what it will fit; it also has to do with what they’re trying to achieve in terms of handling and feel. A narrower track is very much better at sidehilling, and you would think you wouldn’t notice that, but you really do.”

Additionally, wider tracks can be surprisingly heavy. A Camoplast 16-inch by 174-inch track weighs in at around 75 pounds, according to Woog. The lug, or paddle, design of the track is key, of course. Different sizes, placements and composition of the lugs have dramatic effects on handling.

“The track paddle arrangement where conventionally they would run paddles down the center and stagger symmetrical paddles on sides, that’s what you see the most of and it was considered a staple design until recently,” says Woog.

Now, new designs in paddle shape and placement have changed snowmobilers’ options. What should a rider look for? 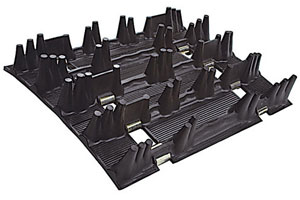 This ‘fingered’ design is best for wind-blown and packed snow, spring conditions, and climbing. 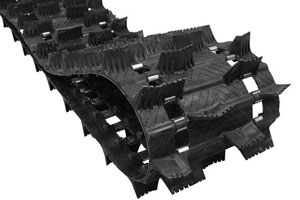 The Series IV is a mountain track with exclusive 2.125″ profile height.

The two biggest factors in track performance are lug shape and durometer, the hardness of the rubber. Softer rubber has a lot of advantages; it has a better memory, meaning it will spring back into shape; it has a greater resistance to damage from hidden obstacles commonly found in mountain riding, since it will bend rather than tear; and it will lay back under power. When the lug lays back, it creates a ‘pack face’, forcing the snow downward under the sled, creating flotation and lifting the snowmobile up. Flotation is key when riding in deep, soft, dry powder.

Of course, since powder riders may encounter hardpacked snow on the groomed trail on the way to open powder, and riders who prefer hardpacked snow will encounter softer stuff now and then too, compromise is a must and lug design comes into play as well.

Negative angles on the lugs themselves will also help to create more flotation, but will reduce the grip in hardpack conditions.

Camoplast’s Maverick mountain track uses ‘fingers’, or cylindrical lugs, to add hardpack grip to its powder design. It still has its drawbacks; Woog describes the Maverick as an excellent trail performance track, and an OK deep powder track.

When looking at tracks, also examine the shape and size of the lugs; is the track made from many shorter lugs or fewer, longer ones?

Tracks like the Attack 20, a purpose-designed powder track commonly used on Arctic Cat’s mountain snowmobiles, use paddles that are more than seven inches long. This design works phenomenally well in deep powder, Woog says, but offers reduced traction on groomed trails. The longer paddles can slip sideways in the corner or skate. The Series 4 track used by Polaris instead incorporates many paddles that are around 3 inches wide, offering much better cornering performance but giving up a little in deeper, softer snow.

New track designs and technology aim to find the best of both worlds by marrying different components into one track, such as a combination of paddle sizes or different rubber compounds.

“Track manufacturers are trying to find what works the best overall, but are not abandoning any one direction,” says Woog.

Track design is a study in compromise. Unfortunately, there is no perfect design for all conditions a rider may encounter, so choosing the right track means accurately analyzing the type of riding you do most, and finding a track design that works the best there.