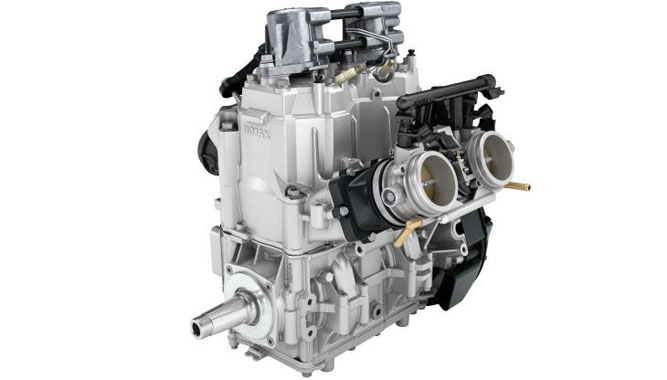 When a directive comes down from the top, you are expected to pay attention. When that directive for Ski-Doo to create a totally refreshed “incredible customer experience” came from Jose Boisjoli, Chief Executive Officer, President and Board of Directors member of BRP Inc., every team member at Ski-Doo took note. The result is an entirely new series of 2017 Ski-Doo snowmobiles that showcase a brand new fourth generation chassis, fresh styling that reflects Ski-Doo’s pioneering past and an all-new Rotax engineered 850cc two-stroke E-TEC twin.

At the press introduction this past January in Riviere-du-Loup, Quebec, no less a Ski-Doo authority figure than Mr. Boisjoli himself introduced the new sled, the team members who made it happen and a bit of background. He minced few words, stating unequivocally that the new 850-powered Ski-Doo snowmobiles were meant to be a statement about Ski-Doo’s legacy and leadership. “We are the leader in the industry,” Boisjoli emphasized “…and we believe it will be a statement.” 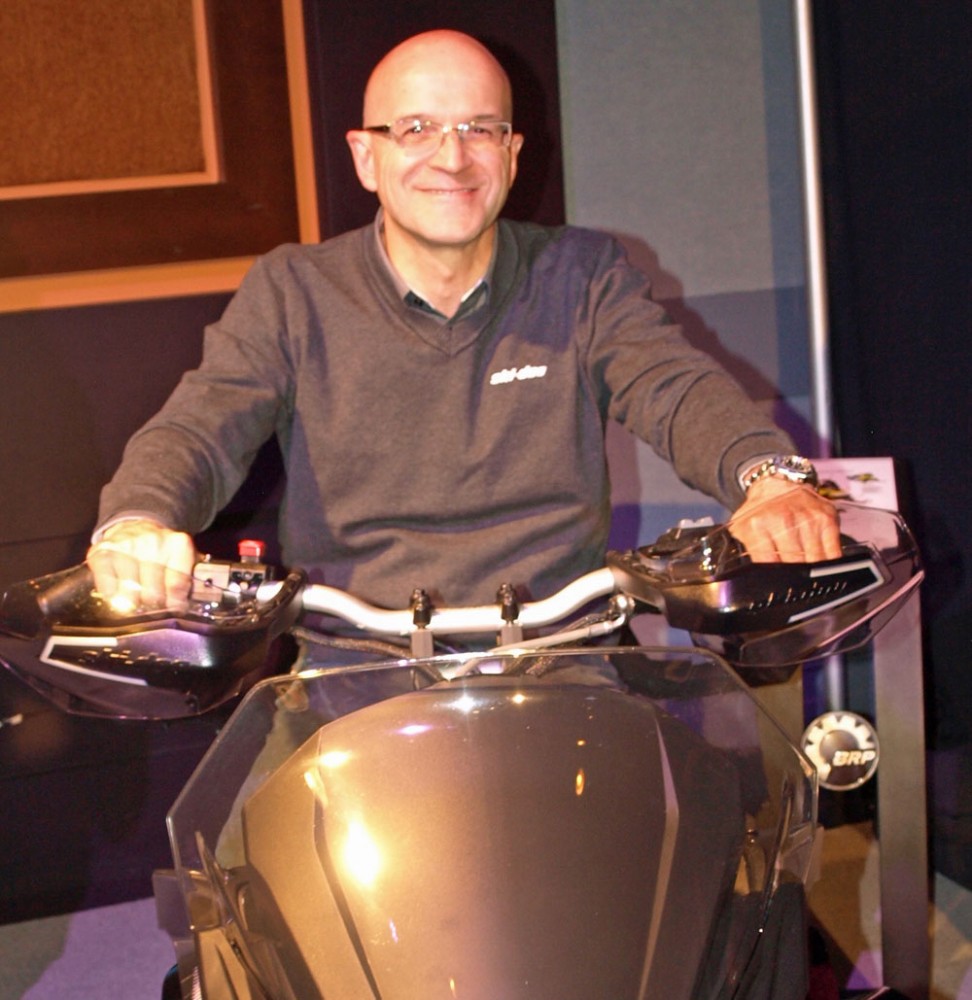 The all-new 850 E-TEC used to power top of the line 2017 MXZ, Renegade and Summit models reflects upper management’s commitment to the new line of performance sleds. Boisjoli explained that the new power source is state of the art and reflects Rotax and Ski-Doo experience with both two-stroke and four-stroke engine technologies. He noted that instead of simply creating more power by turbocharging the existing 1200 4-TEC, the Ski-Doo and Rotax team was directed to achieve the smoothness and strong torque of a four-stroke with the light weight of an E-TEC, which was felt would provide an exceptional rider experience that was desired to complement the new GEN-4 chassis.

You need to understand a singular fact; Ski-Doo’s partnership with Rotax virtually dates to the origin of the Ski-Doo Olympiques, which led Ski-Doo’s sales dominance in the early 1960s and which continues today.  At first Rotax was the engine supplier, but with sales success came Ski-Doo’s purchase of the Austrian-based company. Today as an integral member of the BRP powersports team that includes Ski-Doo and Lynx snowmobiles, Sea-Doo watercraft, Can Am wheeled products and lightweight aircraft engines used to power ultralight aircraft and military drones, Rotax engineers created the engine in conjunction with the chassis, which allowed designers to create a neutral side-to-side balance in the new sled. Along with the chassis came performance parameters that Ski-Doo management felt necessary to create that new “incredible consumer experience” that would leave a smile on the face of the rider. 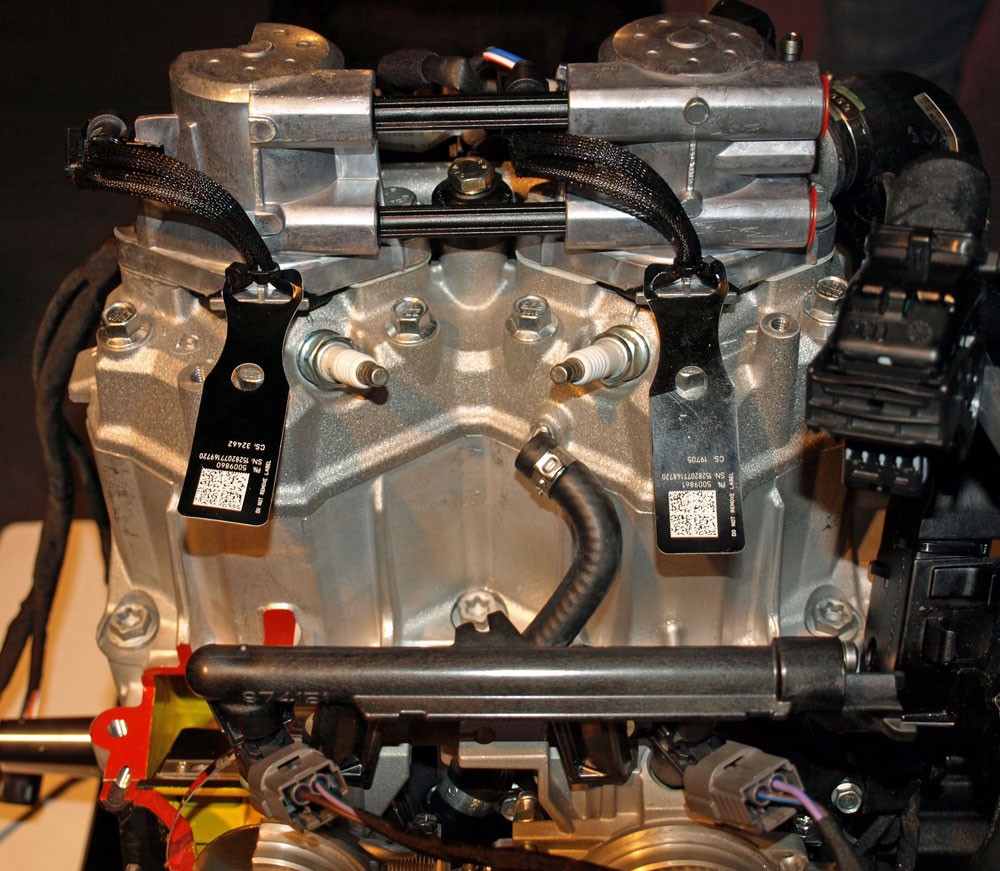 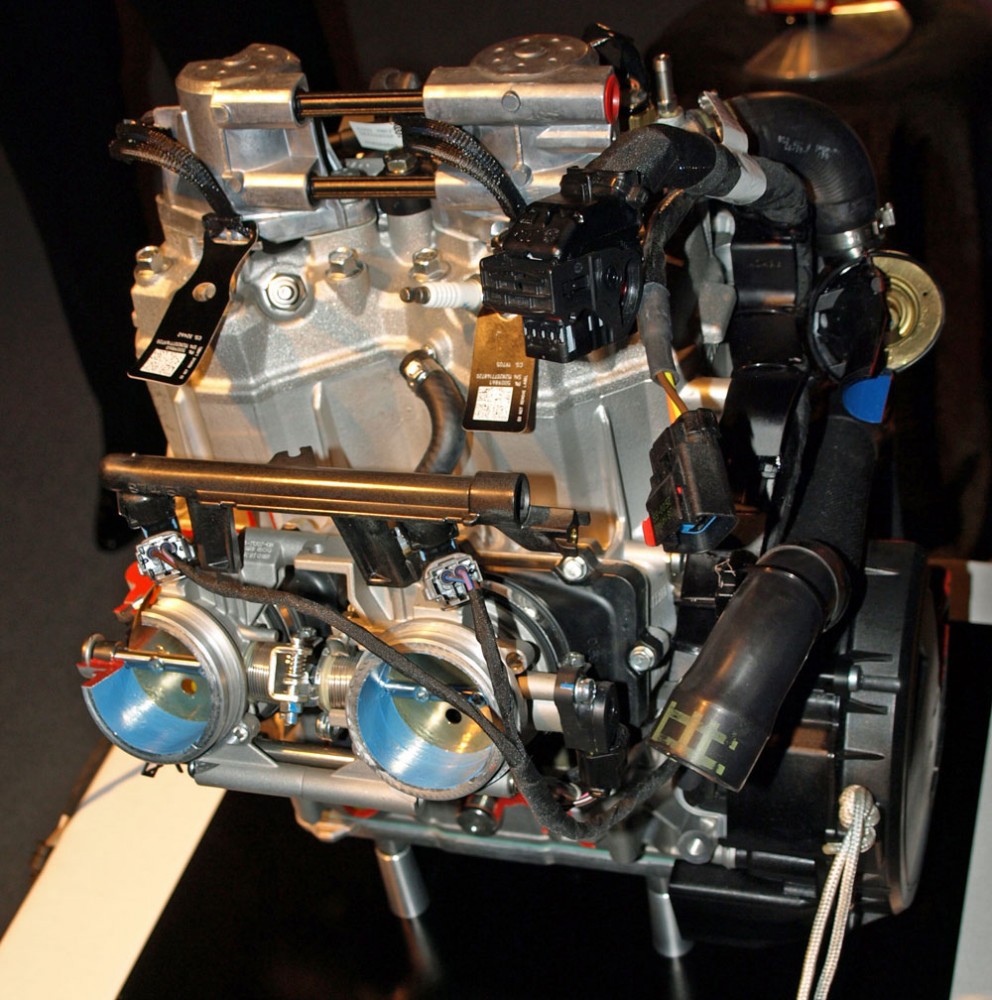 The 850 is the first all-new E-TEC twin since the introduction of the 800R E-TEC in 2010. That engine displaces 799.5cc off a bore of 82mm and a 75.7mm stroke. The new 850 twin features a similar 82mm bore but a longer 80.4mm stroke for a slightly “over square” engine make up. Both engines deliver peak power at 7900 revs. Just to clarify, Ski-Doo materials claim peak power at 7900 rpm, but Rotax lists the 850 engine as delivering power at 8000 rpm – virtually the same. Ski-Doo notes that the new 850 has 10 more horses than the 800, which is claimed to be directly attributable to increased displacement. Other stated performance differences over the 800 E-TEC include 30 percent quicker throttle response; oil consumption that reflects 40 percent greater range; and similar fuel efficiency at 19 miles per gallon even with the larger displacement.

To achieve this new level of efficiency and performance, Ski-Doo and Rotax engineers started with an open mind and decided what the performance capabilities needed to be. With performance parameters outlined, the team revisited the E-TEC system itself and arrived at a second generation of E-TEC direct injection which is a pound lighter than the previous system, but features cylinder head voice-coil injectors that are more precise. And, then they thought about how they could provide an extra kick for quicker power that could be used for such riding needs as enhanced pull coming off a turn. That’s the idea behind the booster injectors that have been added at the intake and come into action when you snap the throttle hard at mid-range and high rpm. This “boost” sprays added air-fuel mix to enhance the power sensation and is designed for, as Ski-Doo states, “dynamic response.” It is noticeable, but it isn’t as dramatic as a nitrous charge. 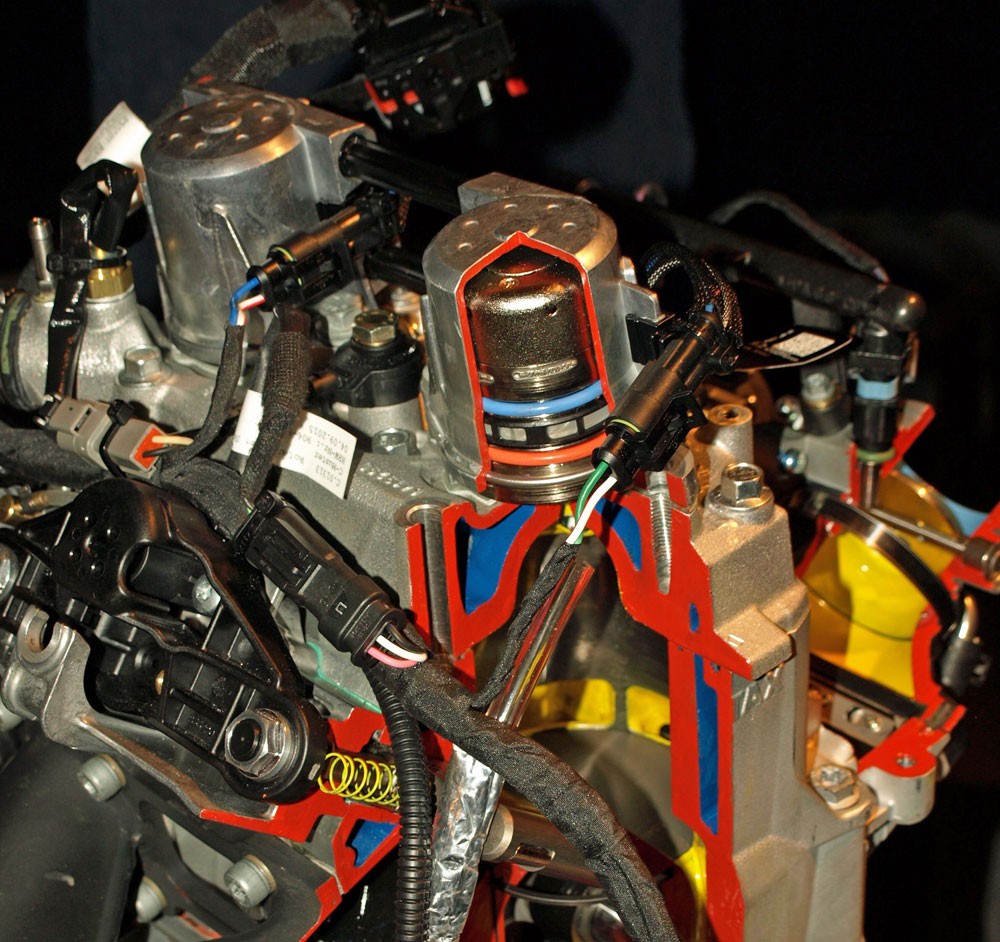 With the 850’s performance parameters outlined, the team revisited the E-TEC system itself and arrived at a second generation of E-TEC direct injection which is a pound lighter but features cylinder head voice-coil injectors that are more precise.

The intake system is acoustically tuned and redone with 11 compartments that allow better passage of air while countering noise. The end result is an 8.5 percent better air flow than is found in the 800’s intake.

The 850’s throttle bodies have been moved 35 percent closer to the cylinder than on the 800 E-TEC, but are actually 10 percent lighter even with the addition of the boost injectors. Controlling the engine’s electronic activities at a rate of 32 million cycles per second is a new and “smarter” fuel-cooled engine control module (ECM). That’s twice as fast as the ECM rate in the 800. 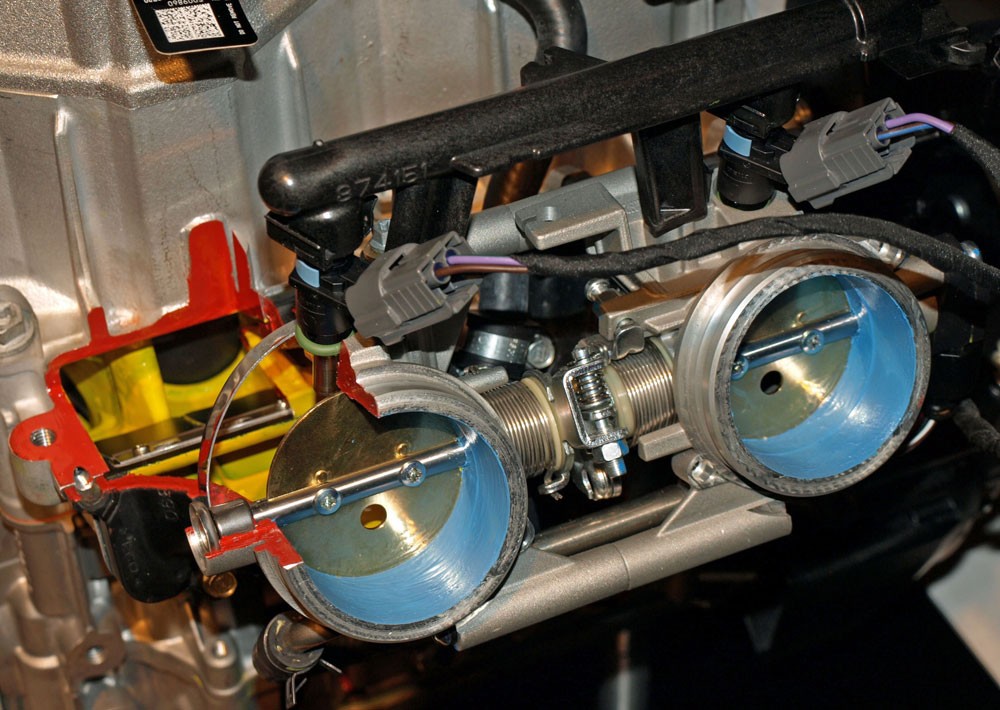 Note the “boost” injection directly behind the throttle bodies. They kick in at mid-range to provide a noticeable and quick hit of boosted power.

ECM calculations handle the latest eRAVE electronically controlled exhaust valve, which now feature three positions that open and close up to three times faster than the “e-valves” of the 800.

The new 850 benefits from a totally new exhaust package that is both lighter and quieter with a fully insulated pipe that heats up faster to better reach peak performance. The exhaust aftermuffler is also lighter and more compact to enhance weight balance. 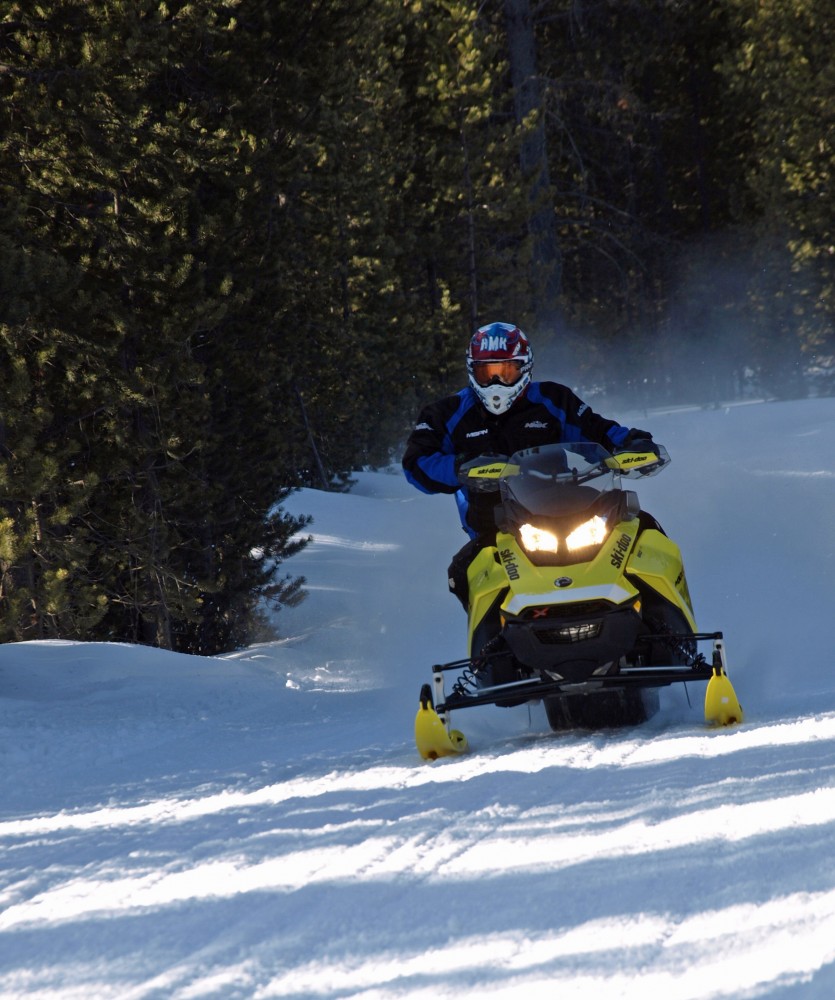 One of the corporate mandates for the new 2017 MXZ X 850 was to provide an “incredible consumer experience” that would leave riders with a smile on their faces.

To assure long term performance and overall quality, Rotax engineers specified a new plasma coating to replace standard nicasil coatings. This new coating, which results in a slightly porous sponge-like effect to better retain oil, is essentially a superheated steel alloy that is sprayed onto the aluminum cylinder walls to reduce friction. Because of the vast experience Rotax engineers have in developing engines, they decided to bring some diesel and four-stroke thinking to their latest E-TEC design. The piston ring carrier reflects diesel technology as a cast iron insert holds the piston ring to better manage internal micro movements.

The crankshaft design reflects four-stroke thought as it’s comprised of two forged pieces. Because of the high performance nature of the new engine, engine designers created a way to direct oil lubrication to the bearings exactly where needed as opposed to the “splash and spray” methods used in previous designs. The result is a larger displacement engine that consumes no more oil than the oil-efficient 600 E-TEC. 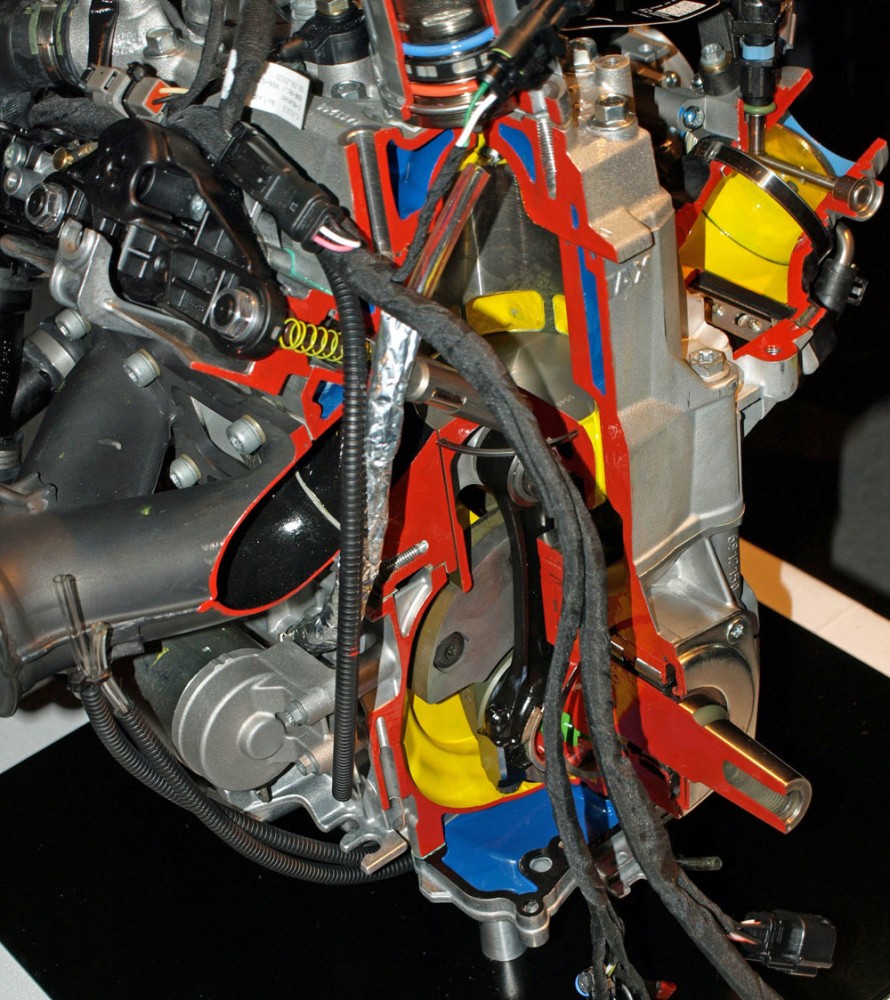 Ski-Doo also reworked the starter motor, positioning it on the crankcase and integrating the ring gear in the flywheel to relieve stress on the starter gear. This design technique was borrowed from BRP’s motorcycle engineering. You’ll find a more powerful and lighter weight magneto that delivers nearly twice as much amperage at idle than the one used on the 800.

The all-new GEN-4 Ski-Doo/Rotax 850 E-TEC package delivers greater power with improved efficiency. Just one ride aboard a 2017 GEN-4 Ski-Doo powered with the new 850 will prove that when the big boss spoke, the team responded with a sled that will leave a smile on your face as you experience the next level of Ski-Doo performance.