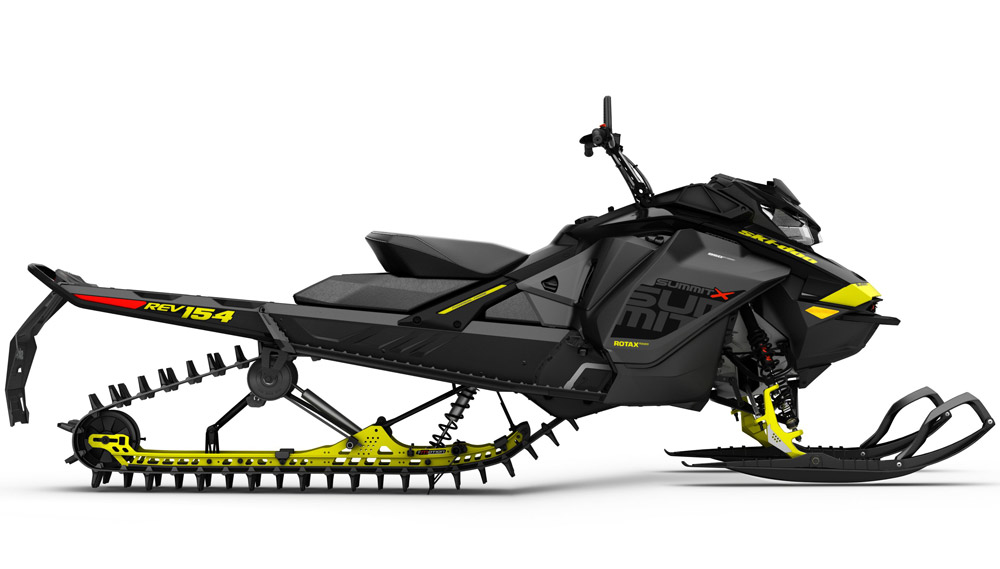 Snowmobiles are complicated machines and for 2017 Ski-Doo has found a way to take the complicated out of its mountain tamers – the REV Summit X and SP 154 and 165.

Ski-Doo calls its new Generation-IV (Gen-4) Summit line simply REV; the key label when Ski-Doo introduced its REV Summit line as a 2003.5 model. This new line is not XP or XM; just REV. Also, a new track length is mated to the Gen-4 REV Summit, 165. Gone is the 163. 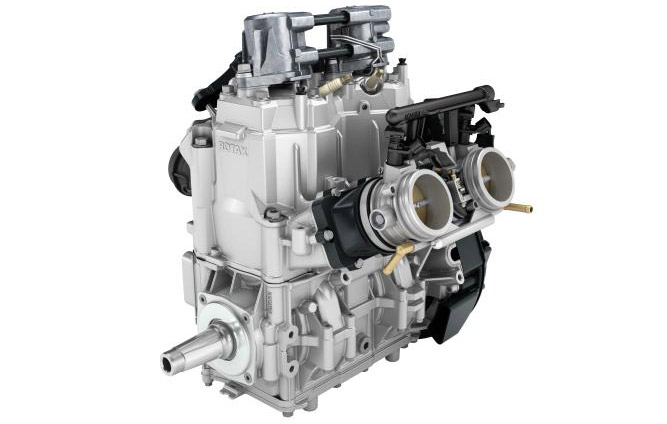 The motor is 1.6 inches/40mm narrower than the 800R E-Tec, has a 2.8-pound lighter two-piece forged crankshaft, which means the motor spends 15% less inertia (energy) to spin the crank. The motor has a unique oiling system, in that oil is channeled directly to the main bearing and crank bearings. This means less oil consumption, thus a clean motor.

Actual displacement from the new 850 motor is 849cc from an 82mm bore and 80.4mm stroke. This is nearly a square motor. A square motor is a motor where the bore and stroke are the same; the closer a motor is to being square, the more efficient it is at moving air and fuel. The 850’s maximum engine speed is 7900 RPM. 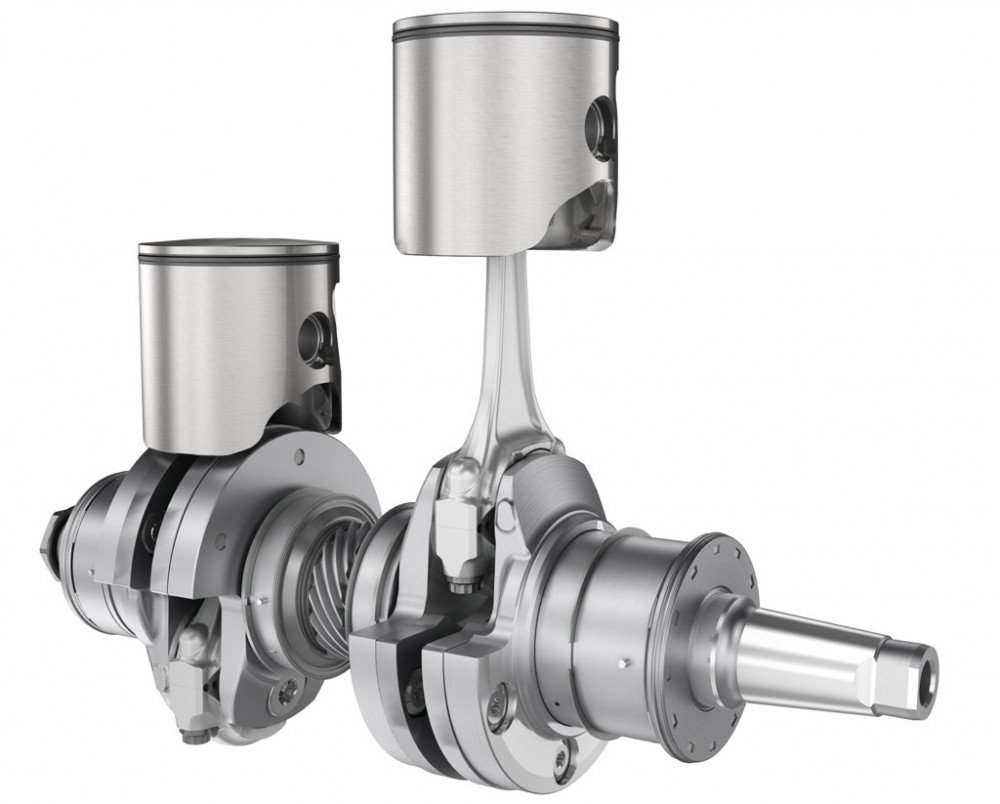 The motor has a 2.8-pound lighter two-piece forged crankshaft that means the motor spends 15% less inertia (energy) to spin the crank.

The 850R E-Tec motor has a smart RAVE system, called eRAVE which is three-times faster and more intelligent than the 800R’s RAVE system. The eRAVE system helps keep the motor torque-filled at low RPM, and gives it the means to open up at peak RPM. The eRAVE also assists the motor in being snappy when the fuel-booster injection system jumps into the fight to flatten a steep hill.

What is the fuel-booster injection system? It is a fuel fogging system that sits atop the two throttle bodies and when the Summit’s operator “braaps” the throttle for needed track spin, additional fuel is fogged into throttle bodies’ throat. Adding more atomized fuel to oxygen means only one thing, bigger boom at top dead center. The fuel-booster injection system is tied to engine RPM and throttle position and comes to play – momentarily – when the driver hits the throttle for that needed/wanted ski lift, or to make a point they’re the mountain’s boss. The boost system is an on-demand system. This boost system gives the 850 a pseudo liquid-nitrous feel when the fuel hits the combustion chamber. We like it.

Who would have thought the 800R E-Tec would seem outdated? 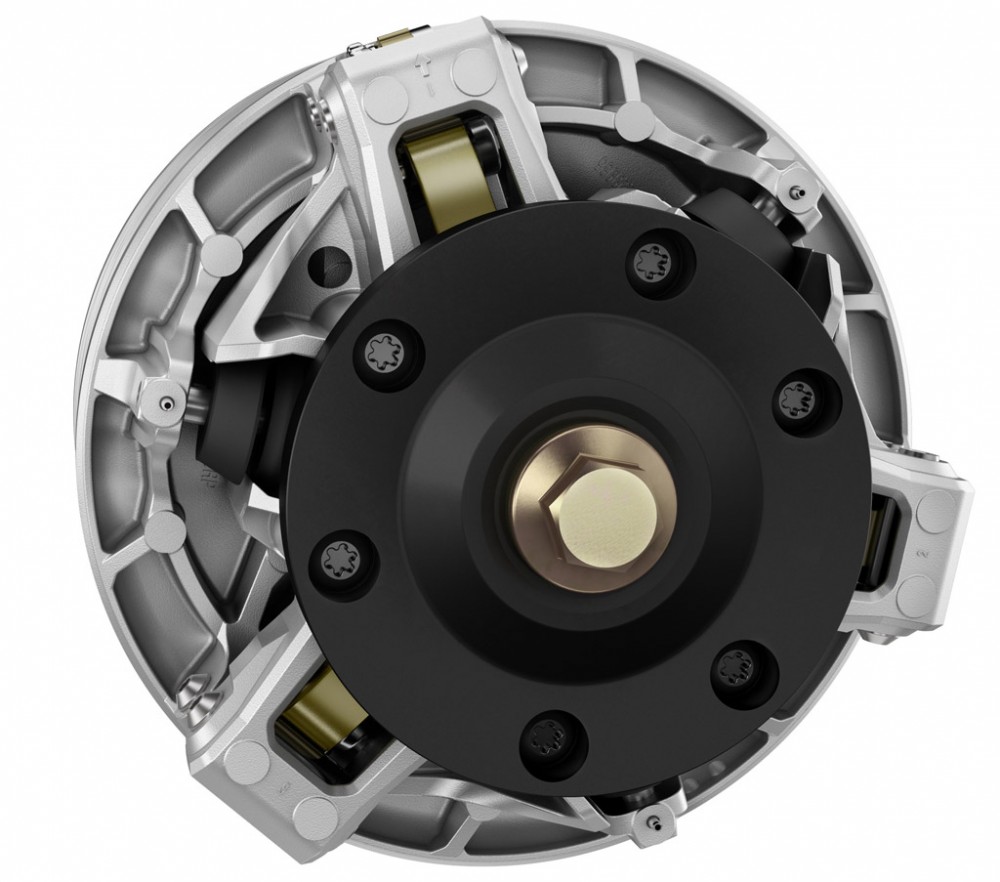 The Gen-4 REV Summit is an all-new chassis Summit, not a refreshed XM, though it is a pyramidal design like the XM.

It is narrower than the XM and its new 850 twin was engineered to fit into the narrow chassis by being narrow itself. Ski-Doo knew that to take its Summit to the next level, it needed to have a skinny motor to match its skinny chassis. As we learned from Ski-Doo’s Summit engineers, this is the first time in mountain snowmobile history where a motor was exclusively designed for a single purpose: mountain riding. 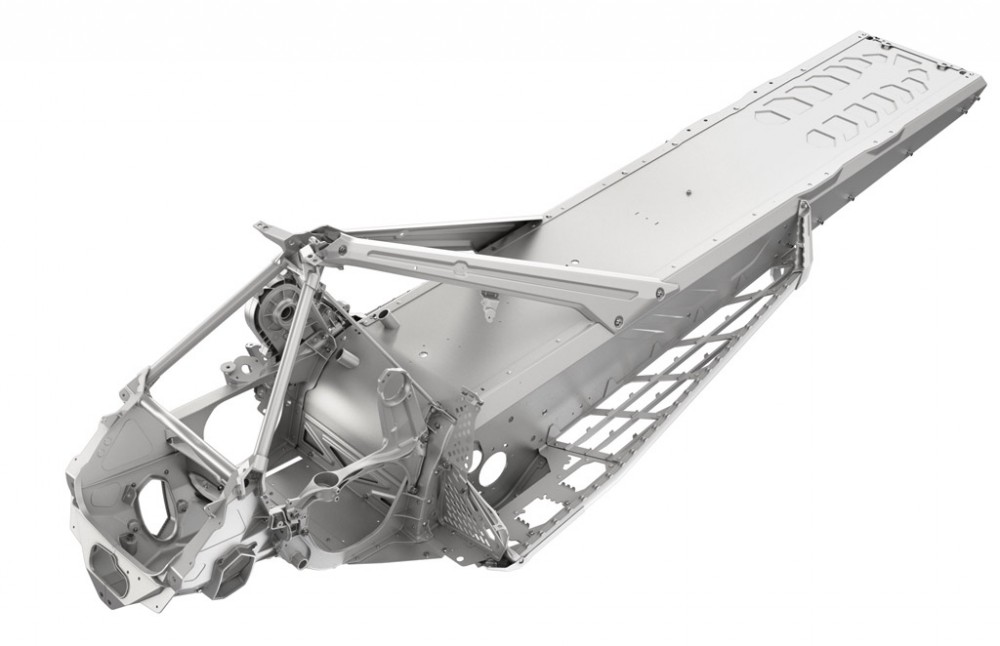 How skinny is the new Gen-4 REV Summit? Well, it’s like riding a snowbike with two skis, a longer and wider seat (not much longer and wider though), a big-bore electronic fuel injected (EFI) two-stroke twin, CVT (constant velocity transmission), runningboards, windscreen and a snowflap.

This tailor-made Summit has what Ski-Doo labels, “Powerdynamic” where, as mentioned, the body side panels, as well as the REV Summit’s new hugely-open and narrow runningboards and open tunnel cap give the REV Summit its deep snow maneuvering and sidehilling capabilities.

Additionally, the new REV Summit chassis has what Ski-Doo calls “Powerpack.” The narrow chassis further centralizes the Summit’s greatest mass (the motor) such that the motor is truly central, where side-to-side weight distribution is 50/50.

How much narrower you may ask? Ski-Doo cinched in the REV Summit by four-inches, two-inches on each side, and moved the front toe hold forward, rather opened it more toward the engine, by 2.6 inches. Besides the panels cinched in by two-inches per side, the lower side panels were elevated up one-half of an inch to minimize the pan’s surface from dragging the snow. All this equates to: “Wow.”

The GEN-4 REV Summit 154 for example, according to Ski-Doo, is 25 pounds lighter than a comparable Summit X 154. That should make you hungry for the mountains. The weight loss comes to the mountain rider as a complement from a lighter Response Angle Suspension (RAS)-3 front suspension, a lighter, yet stronger tMotion rear suspension and new PowderMax Light FlexEdge track, which is a 3.5 pitch track and is the traditional 16 inches wide with three-inch tall paddles. 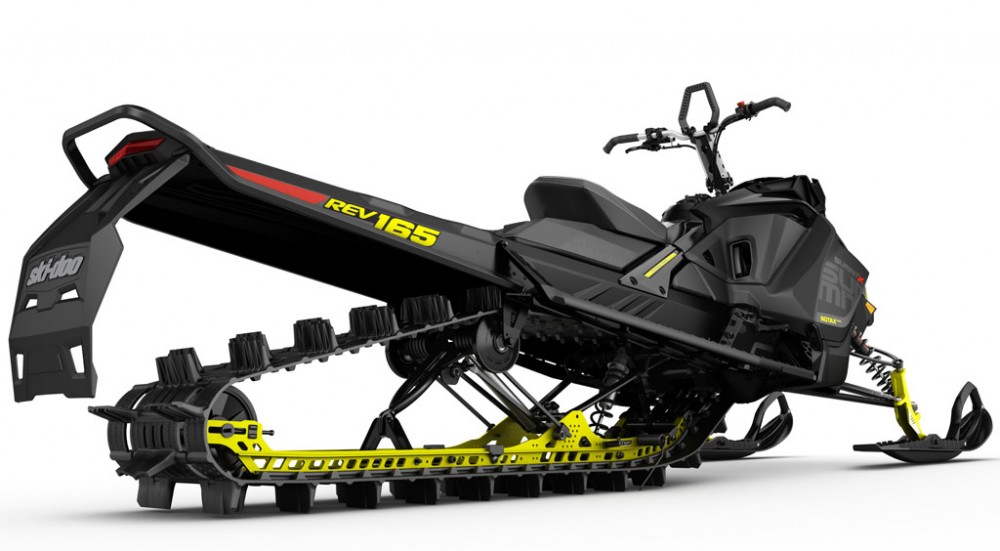 The new PowderMax Light FlexEdge track with its spaciously-spaced paddles will bite, shovel and pull snow like a steam shovel.

We’re only touching on the main points of Ski-Doo’s new Gen-4 REV Summit X and SP. There are others such as a lighter seat, with a profile that limits a leg from being caught at the tail when leg hopping; a new and much lighter minimalist instrument pod; new goggle warmer/box; narrow cockpit and narrow fuel cell; lighter and quieter air intake box; and lighter exhaust system and canister.

So, with a suggestion to dive into Ski-Doo’s promotional material on the Gen-4 REV Summit X and SP Summit, what is it like to spend a day on the Gen-4 X and SP, be it 154 or 165?

In the deep backcountry at Carl Kuster’s Mountain Park (CKMP), Sicamous, British Columbia, Canada, I took to the Big Country (B.C.) in B.C. The snow was deep, wet and falling down like guffaws in a presidential debate. 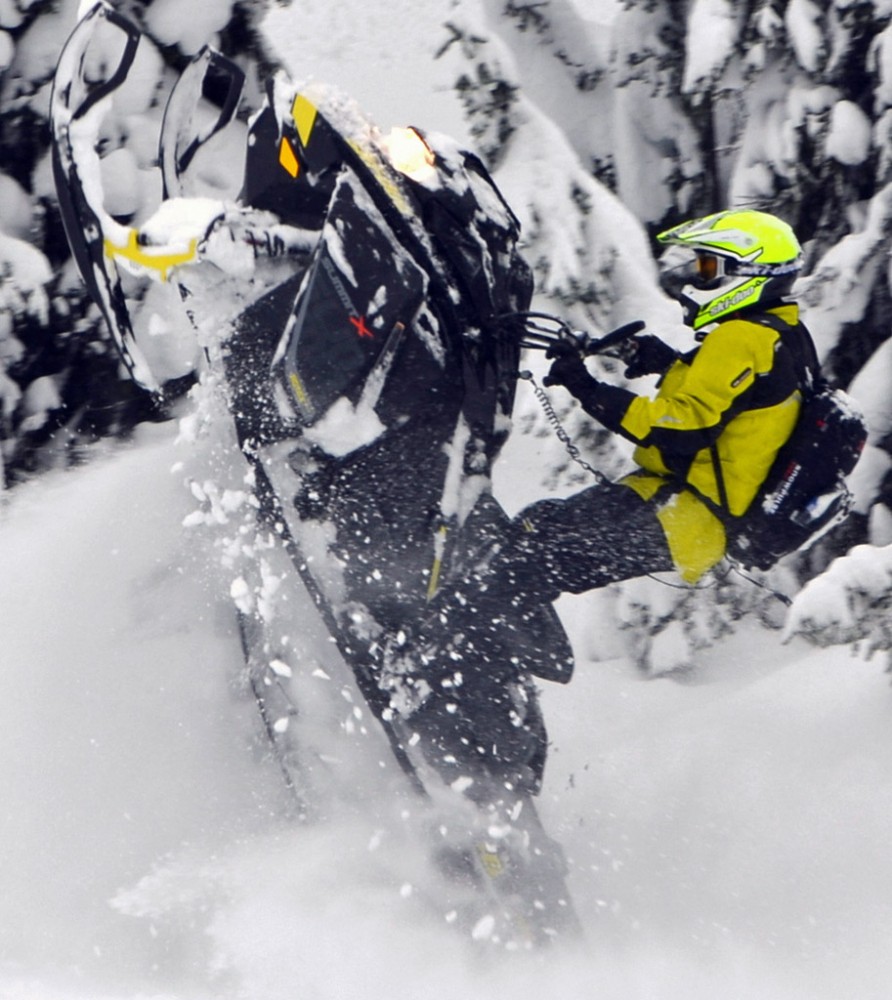 There’s enough power from the new 850 to stand a Summit on end.

Ski-Doo may have built a snowmobile that is so fast at responding to driver command the driver may wonder if there is any time between 1/100 of second and 1/10 of a second. As we stated to Ski-Doo’s promotional video team, the new Gen-4 REV Summit’s quick reacting chassis should be locked up, or made illegal to ride. Meaning, the snowmobile is a feather on the snow, and if the driver’s attention fades from the task on hand, she/he may find themselves in a time wrap wondering how fast 1/100 of a second is.

When the big-bore 850’s throttle bodies open at the throat to receive additional 91-octane moonshine from the boost bottle, make sure your eyes are wide-open as trees will blur as if you’ve unleashed Challenger Hellcat hell.

The new Summit is easy, agile and sweet to ride, sweeter and easier than the XM, but also know, the Gen-4 850 Summit is a hot bullet seeking to hit its mark and destroy. How can something be so sweet yet so nasty? 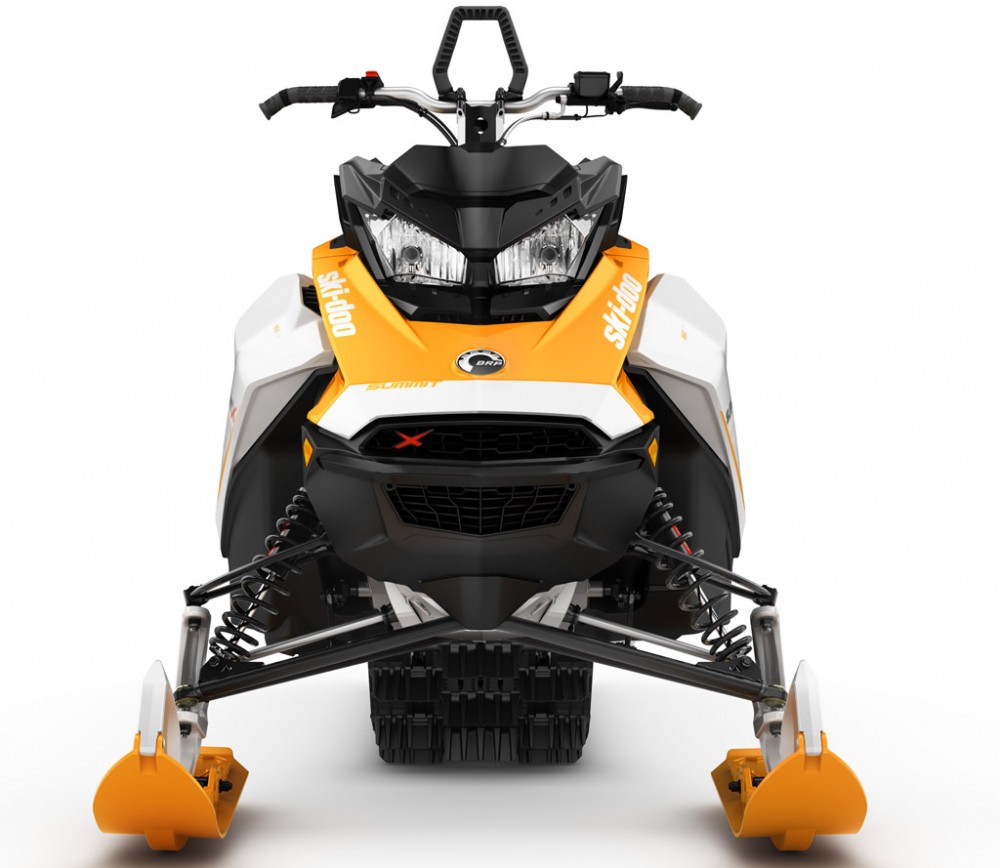 Colorful option packages abound like the Summit in Orange Crush.

The new PowderMax Light FlexEdge track with its spaciously-spaced paddles will bite and pull snow like a steam shovel, giving the Gen-4 REV Summit the forward momentum mostly reserved for turbos and piped-out big-bore mods.

At the cockpit, the rider has ample room to be acrobatic on the runningboards and around the seat. When the need comes to stuff a big boot up in the toe hold, then stuff away as the wide moved-forward holds give the driver the leverage to pull up the bars and carry the Summit to a location your buddies only dream of. Oh, and it’ll take no effort to do this. Pounding down the electrolytes and protein bars prior to riding this Summit is not necessary, only a dose of grease to keep the muscles moving fast as this new Gen-4 spins on a dime and gives nine-cents back in change. 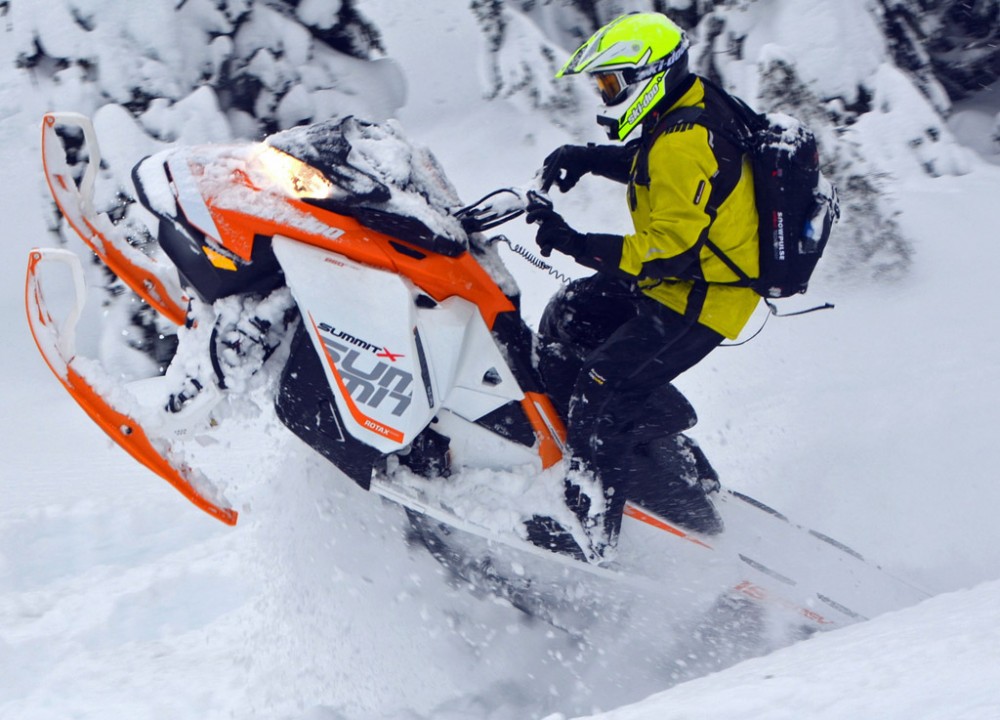 Did Ski-Doo have its sights on Polaris and Arctic Cat when it built the Gen-4 Summit? Nope. Ski-Doo’s sights were set on itself. Competition is good, especially when the competition is within. Ski-Doo out did itself. 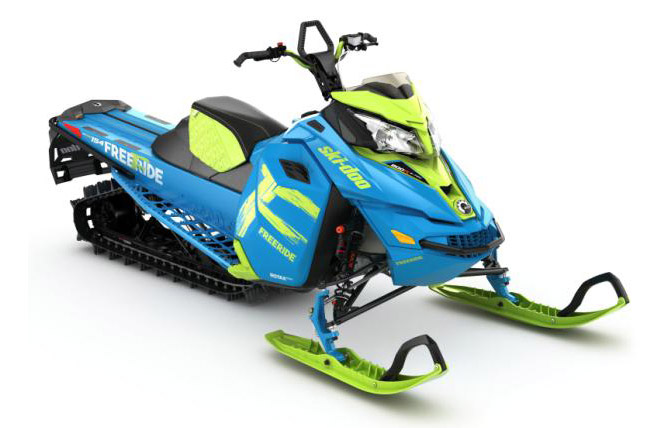 Look for bright new colors from Ski-Doo’s Freeride series, but no 850 twins — yet!

The 2017 XM Summit X and SP 800 174, like the Freeride mentioned above, comes this year as it did last model year, 2016, with the only change in color and graphics. The 174 Summit is a crawler and cliff hanger, and a sidehilling beast that is sweet to the touch. Does it feel long? Not to us.