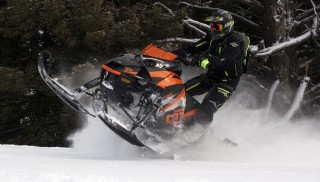 The 2018 Arctic Cat M9000 King Cat may not be a first choice for the mountain rider. Yet again, it may be. Big chute shooters will like this turbocharged 162er.

At Hay Days, September 2017, Arctic Cat announced for model year 2017 that it was going to take the motor in the Thundercat, also shared in Yamaha’s Sidewinder M-TX and B-TX, and bolt it to the Mountain Cat chassis as a late-build 2017 King Cat. The 2017 Mountain Cat, Cat’s best M8000 to date, was the perfect chassis for the big turbocharged three-cylinder motor, developed jointly between Yamaha and Arctic Cat, with Yamaha as the lead.

For riding season 2016/2017, we contacted Arctic Cat in hopes of securing a King Cat for a weekend or two. Little did we know Arctic Cat approved our request and sent a King Cat our way for a season-long evaluation.

We took the King Cat to our model year 2017 Deep Powder shootout, January 2017, where we weighed it and ran it through our timing light speed runs; it was fast, clipping off the fastest runs. Additionally, our many guest riders set out to ride it, learn it and find its strengths and weaknesses. During this time, Arctic Cat contacted us in the Snowmobile.com mountain program, asking for test driver quotes. Here are what our test riders had to say about the 2017 – the upside.

“Out climbs everything; speed wise, no other stock snowmobile can make the same uphill speed as the King Cat.”

“Powerful son-of-a-gun. The King Cat in the Mountain Cat chassis was right choice by Arctic Cat. The cinched in lower panels, narrow runningboards, and dropped and rolled chaincase make this King Cat, ‘King.’”

“Eat your Wheaties and hold on. The King Cat keeps scratching up the steepest slopes; it has unbelievable track speed.”

“Nothing like a turbo in the deepest powder. It felt good in my hands, and I liked how it rolled to its side; it rolls well.” 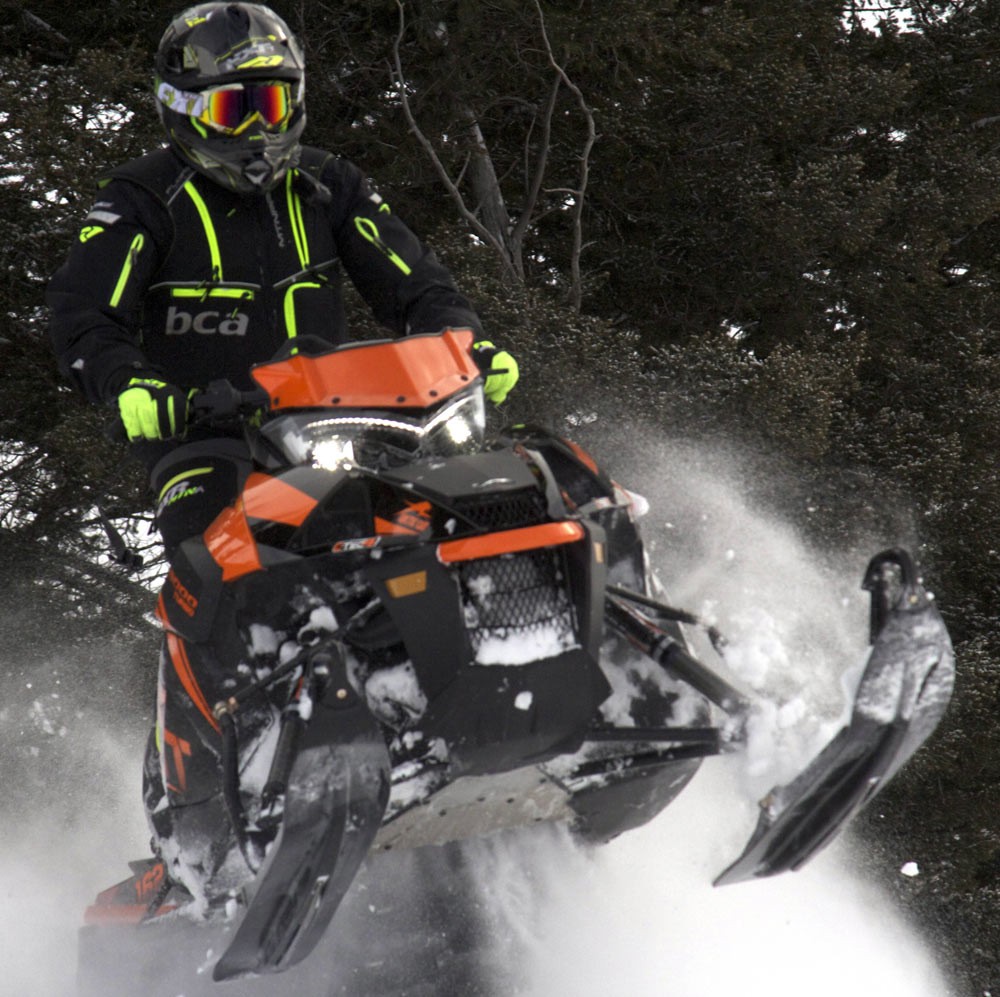 The King Cat’s large radiator surely keeps the motor cool, but when plugged, the motor will throw a code that it is overheating.

With this sled, ‘Have it your way.’ For a big sled, this ‘King’ has awesome power; its handling is excellent and its front and rear suspension is fantastic.”

“Wow, I can’t believe it is a stock mountain snowmobile. This King is ridiculously fast…. stupid fast. Best four-stroke snowmobile I’ve ever ridden…ever.”

The 2018 Arctic Cat M9000 King Cat’s motor, is a three-cylinder, four-stroke high-performance 998cc motor with three 41mm throttle bodies; built by Yamaha it is known as C-Tec4 by Arctic Cat. Horsepower is a claimed 200. But, we’ve heard and have read, the Yamaha motor more likely makes approximately 205 horsepower; this from independent dyno results from a seasoned motor on a hot pipe. 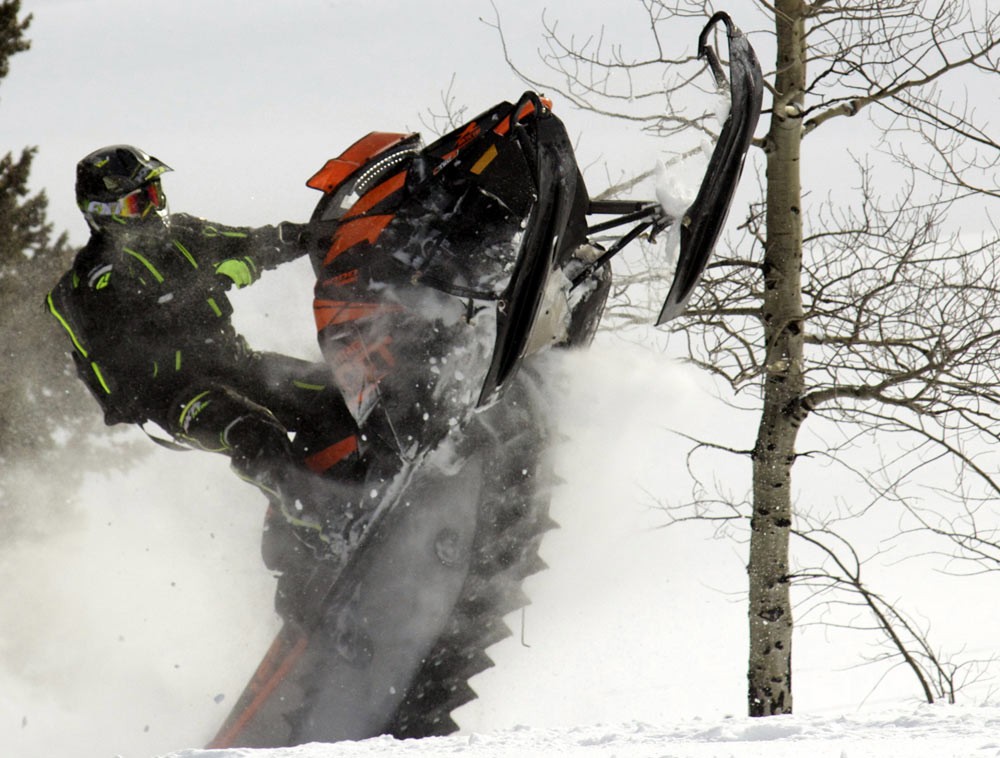 At over 600 pounds, fully loaded, the King Cat is heavy. But its boosted motor gives it superb power-to-weight. The big turbo motor makes the King Cat feel much lighter than what it is.

When given the opportunity to show its full attitude, the King Cat will seize the opportunity to deliver. As we learned last January, February and March on our 2017 and on a 2018, the King Cat will offload any stock or non-boosted 800 or 850 when climbing. As the two-stroke snowmobiles dig down to find traction, the King Cat boosts forward and upward.  Just when you conclude gravity and snow depth conquered the King, the big 162 track spins at a rate near the speed of sound, moving more snow, rocks, trees, squirrels and a lone hibernating bear, and lurches forward.

The beauty of this big three-cylinder four-stroke snowmobile is that as the air becomes thin as elevation increases, the turbocharged King Cat maintains its sea level 200 horsepower. As we’ve written before, for each 1000 feet gained in elevation, a normally aspirated motor (non-turbocharged and non-supercharged) loses 3.0-3.5% of its horsepower; factors affecting the percentage-spread is air temperature and humidity. Some mountain snowmobile owners try to defeat this by adding a tuned exhaust and/or larger cylinders and pistons, or stroke. This increases the motor’s overall horsepower, but does not alter the physics behind air loss due to elevation.

By way of added information; according to Arctic Cat, DynoTech Research, Batavia, New York, reports the C-TEC4 (Genesis 998 Turbo) bangs out 131 foot-pounds of torque from a corrected horsepower of 209-211 (130-plus foot pounds of torque between 7500-7900 RPM, and at 8800 RPM, 210 horsepower). Boost, that is the air stuffed into the airbox by the turbocharger, maxes out 12 PSI – pounds per square inch. 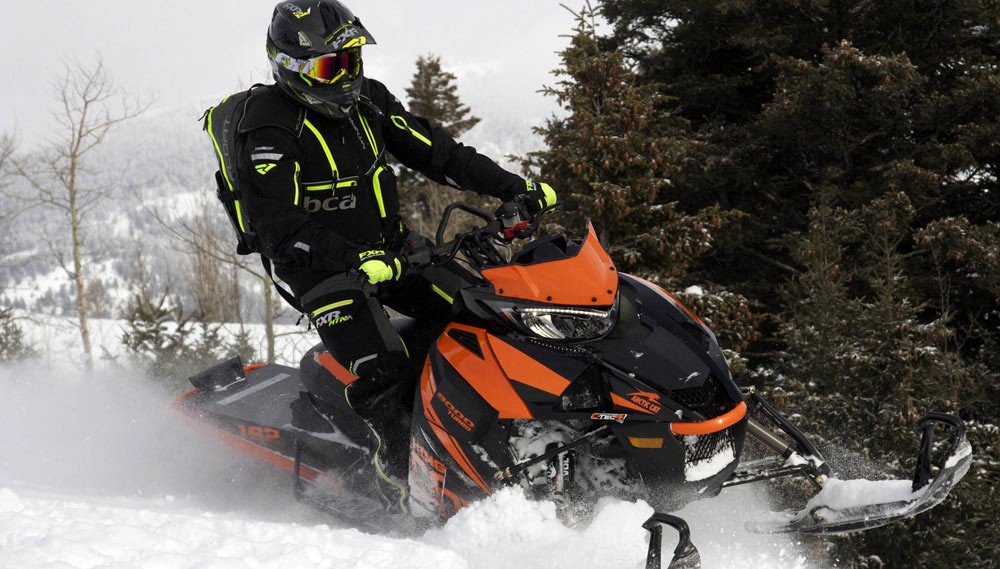 With its cinched in panels, the M9000 King Cat is easy to set on edge. But, if the driver doesn’t manage its weight when on edge, it will easily tip over. The King could benefit from a one-inch taller handlebar riser block.

With a turbocharger, as in the Yamaha-powered King Cat, atmospheric pressure air is stuffed into the motor. With electronic fuel injection, the correct amount of fuel is matched to the air flow, thus, an optimum mix.

With the 2018 Arctic Cat M9000 King Cat, there is very little, almost unnoticed, turbo lag. The King wakes up at a gentle pace, moves its RPM up, and as the love lever is squeezed harder, the motor finds its 200 horsepower and launches. Mid-throttle hit and beyond is insane.

Now that you’ve conquered the chute and laid down the highmark, follow this up by driving the King into the trees to chase your fellow riders on a Mountain Cat for example. This is where man and machine do not necessarily get along.

The King Cat, with its fully-loaded, ready-to-ride weight (fuel, oil, spare belt and tool kit) of approximately 642 pounds can be a handful. Too, with its laydown steering post, off-camber pulls and switches take some planning. However, once the M9000 King Cat is set on edge, it is manageable. We’ve easily stitched some hard lines across a hillside, but initially setting the King Cat up for such takes scouting out the proper line, and then committing and not quitting.

When riding the 2018 Arctic Cat M9000 King Cat, knowing its weight and the limitations from such, keeps it in the fun zone. 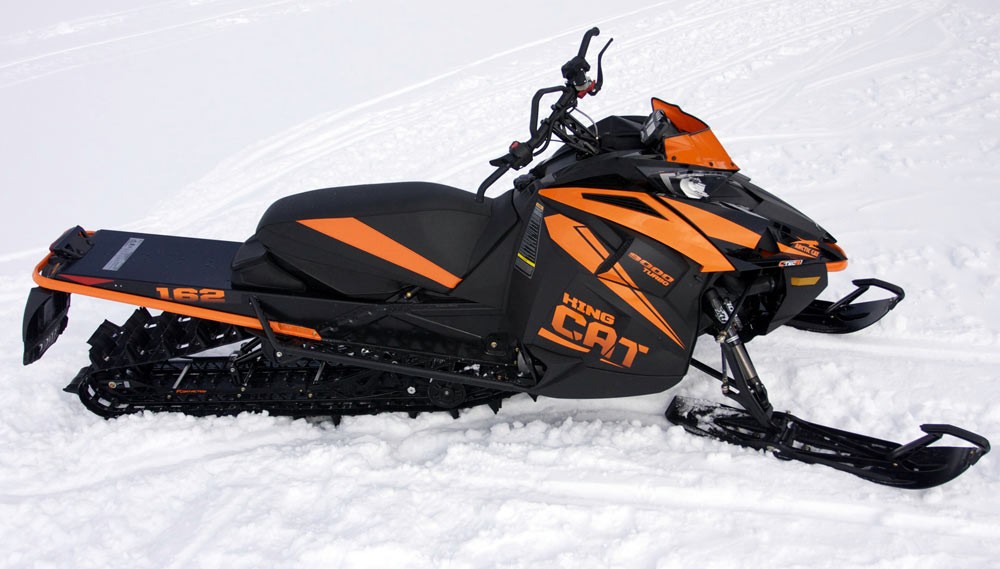 The 2018 King Cat has all the same Ascender chassis and NextGen amenities as the 2018 Mountain Cat. Different though is the King Cat has a laydown steering post.

Truly, the King Cat is heavy, that is fact from a turbocharged four-stroke motor. But, with the 2018 King Cat built on the cinched-in, smoothed-out and narrowed-up Mountain Cat Ascender chassis with NextGen hood and side panels, some of the weighty fight is cut out.

Taking on the Limits

When riding the King Cat, you’ll be surprised at how quiet the big three-cylinder motor is. It starts easy, rolls up the RPM for a brief moment then settles down to lazy idle RPM. As the motor warms, its menacing stance speaks loudly that it is a mountain slayer.  When burning down a trail, the Team Rapid Response II drive clutch and TEAM Rapid Reaction BOSS driven clutch, receive motor input and easily spin the 162-inch by 15-inch wide PowerClaw track with three-inch paddles. 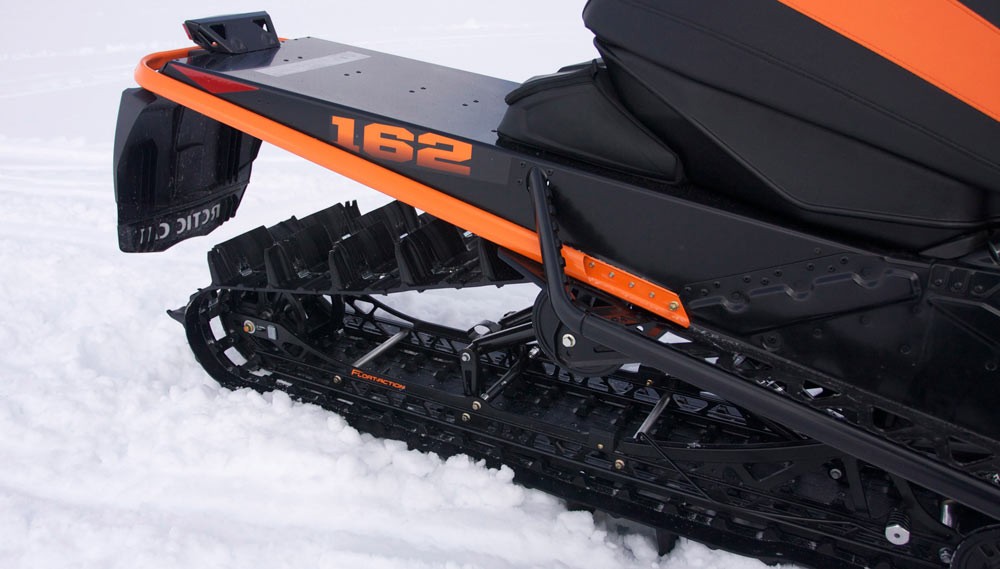 The long 162 PowerClaw track with three-inch deep snow paddles give the King Cat its lift. The Float Action rear suspension also has the Fox Float 3 QSL shock to dial in or out, weight transfer and load settings.

The front Arctic Mountain Suspension (AMS) with two Fox EVOL 3 shocks, in companion with the Float Action rear suspension, set with a Fox Float EVOL 3 shock at the rail’s front and a Fox Float 3 QSL (Quick Select Lock) as the rear rail’s shock, keep the horsepower, torque and weight in control. With the Fox Float 3 QSL set to lock, the nose stays down on the snow – mostly – as boost hits hard. New this year is the Float 3 QSL shock, which our long term 2017 King Cat did not have. With the QSL settings, King Cat drivers can choose either a soft setting, or medium, or locked. Even in the locked setting, if the Float-Action rear suspension encounters a hard-hit object, like a large rock or dead fall Douglas Fir tree, the bypass valve will activate and Float rear suspension will collapse. 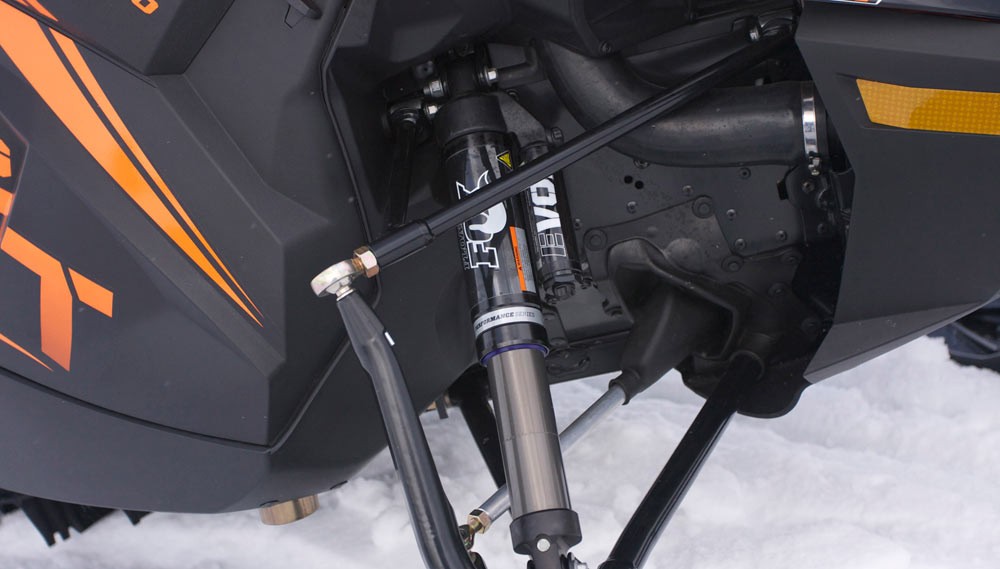 The tipped-in spindles and Fox EVOL 3 shocks help give King Cat balance and control, these are but two components within the front Arctic Mountain Suspension.

The King Cat does not act like the big four-stroke snowmobiles from previous years in that when the throttle is chopped closed from WOT – wide open throttle – it does not come to a halt as if a three-ton anchor was tossed out and behind the snowmobile, sending the driver up over the handlebars and hood. The King Cat free wheels rather well, like its two-stroke counterparts.

Here are two items we believe would improve the King Cat’s handling. With the heavy motor, the ProClimb-7 ski is not wide enough (only 6.5 inches at the middle, under the spindle) to spread out the weight. As Arctic Cat and Yamaha share this same chassis, we feel Yamaha’s Mountain Ski, which is wider, and has a wider and deeper keel than Arctic Cat’s mountain ski, ought to be the ski on the King Cat. The 2018 Arctic Cat M9000 King Cat, when off camber or when in soft snow, the ski will break through the snow and cause the King Cat to dive or roll over on edge; this upset condition happens so quick, oftentimes the driver’s reaction is not fast enough to upright the condition.

The second item is the laydown steering post’s riser, which at 4.5 inches is too low. It is rare for us to state a riser block to too low, but in the King’s case, the riser block should be 5.5 to 6.0 inches. This would better position the snowmobile’s driver at a position to get better leverage. The taller block would help – offset – the upset situations we just mentioned, all conditions created by the narrow ski.

Arctic Cat is more known as a two-stroke snowmobile company. However, it has had some successful four-stroke snowmobiles in its line. With the Arctic Cat and Yamaha collaboration, Arctic Cat, with its Thundercat, XF 9000 High Country Limited, Cross Trek, Cross Tour and XF 9000 Cross Country Limited, and this mountain masher, King Cat, Arctic Cat has the turbocharged four-stroke fleet to satisfy trail riders, crossover riders and mountain boondockers.

As stated upfront, the 2018 Arctic Cat M9000 King Cat may not be a mountain rider’s first choice for a mountain snowmobile. But, then again, it may very well be. We’d take one in a nano-second.