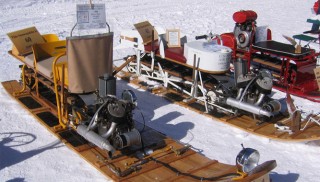 The answer to the question — Who invented the first snowmobile? — probably depends on whom you ask. There may be no truly simple answer as to who is the true father of snowmobiling, the Alexander Graham Bell of our sport. Was it Edgar Hetteen with his rear-engine Polaris Snow Traveler; Joseph A. Bombardier with his front-mounted engine and one-piece rubber tracked Ski-Doo, or Virgil White with his Model T Ford ‘Snowmobile’ Conversion Kit?

But we cast a strong vote for Carl Eliason and his Motor Toboggan. During the summer of 2005 my wife and I embarked on a two-month, cross-country motorcycle trip covering 12,071 miles across 19 US States and four Canadian Provinces. Just northwest of Eagle River, Wis., recognized as the Snowmobile Capital of The World, we stopped in the little town of Sayner, Wis. There we found John Eliason Jr. (Carl Eliason’s Grandson and Owner of Eliason Lumber & Hardware Company) and Faye Taylor (Vilas County Historical Museum Curator) who had no problem giving their answer to this question. In fact, they were more than willing and excited to share their knowledge of the machine that put Sayner on the map. 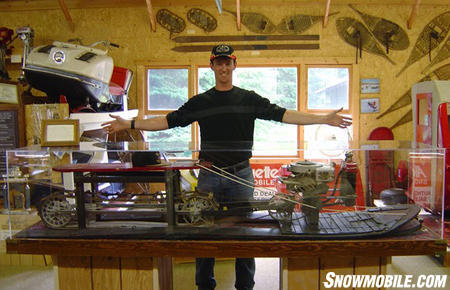 Although Carl Eliason was born in 1899 in Michigan’s Upper Peninsula, he moved with his family to Sayner in 1909. At a young age he was interested in hunting and trapping and started operating his own trap line. Carl had been born with a chronic foot problem that made it difficult for him to check his trap line during the winter months. Due to his foot problems snowshoes were nearly impossible to use. This led him to experimenting with other forms of winter transportation. 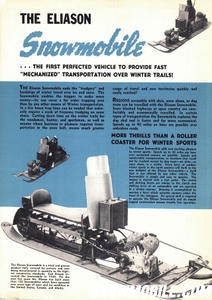 In 1924 in his newly opened General Store, Eliason began working on an over-the-snow vehicle he called a Motor Toboggan. It was powered by a 2 ½ hp, liquid-cooled, gasoline-powered, Johnson Outboard marine engine, mounted on a long toboggan, steered with skis under the front, and driven by a rear, single, endless track. The engine was mounted in the front and the operator’s seat was located above the track. In 1927 Carl received a patent for his Motor Toboggan.

He produced roughly 30 machines out of his Sayner-based operations over the next 16 years, until World War II began. A rumor of a possible order from Finland for 150 Motor Toboggans was on the horizon and Carl began negotiating to sell his patent to The Four Wheel Drive Auto Company (FWD) in Clintonville, Wis., in hopes of filling this large military order. FWD was responsible for building the first successful four wheel drive automobile and would produce approximately 200 Motor Toboggans between 1941 and 1947 at its Clintonville plant. While the rumored order from Finland never panned out, the US Army ordered 150 Motor Toboggans for use in Alaska. They were painted white, to match their surroundings. 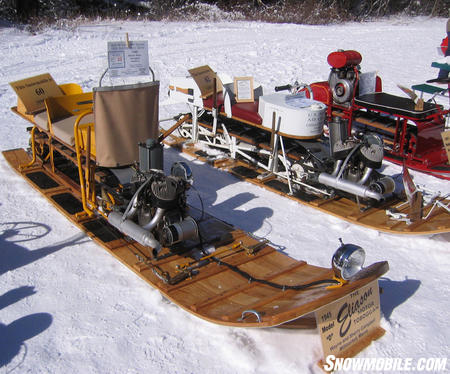 Throughout the 40 years of production the Eliason Motor Toboggans utilized engines developed by Johnson Outboard, Henderson Motorcycle, Excelsior Motorcycle, Indian Motorcycle, Salisbury Engine and Drive, and Briggs & Stratton. Each engine supplier would hold a chapter in the advancement of the Motor Toboggan as a viable snow traveling vehicle. 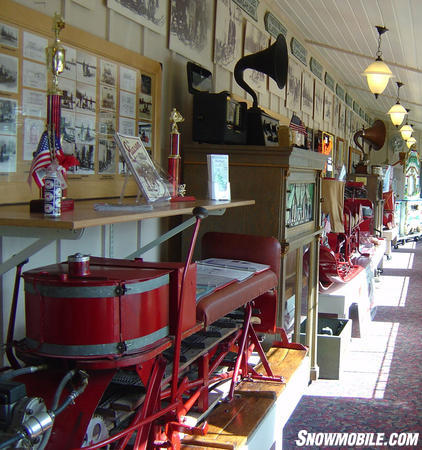 A look inside the Vilas County Historical Museum in Sayner.

Carl Eliason died in 1979 and was later inducted into the Snowmobile Hall of Fame in 1991. He will be remembered for his dedication to the development of winter travel for the outdoorsman. It’s remarkable to think that his 1924 prototype utilized a liquid-cooled, front-mounted engine, and rider over track design — something that other manufacturers would introduce much later in history.

If you would like more information about the Eliason’s history, visit online at http://www.eliason-snowmobile.com/ or plan a visit to the museum in Sayner.