Recalling a town, a man and a classic speed sled that bore his name

Recently my travels took me to Mansfield, Ohio. Being an old snowmobiler, the town’s name rang a few bells. From the mid-1960s into the early 1970s that’s where Rupp snowmobiles were built. Today you’d be hard-pressed to find much evidence of the town’s association with snowmobiling. But there is a ‘Rupp’ presence.

Mansfield is home to Gorman-Rupp, a US$300 million dollar international corporation founded when Herbert Edmund Rupp partnered with J.C. Gorman in 1933 to build a non-clogging pump. Mickey Rupp, the founder of Rupp snowmobiles, was born three years after his father’s company was started. Like his parent, he used his entrepreneurial skills to carve out business niches of his own.

He started with go-karts. In fact, Mickey Rupp is renowned in a variety of ‘go-fast’ sports. His racing exploits with his Dart Karts made him a hero in vintage karting circles. In the early 1960s he was a national karting sensation as both driver and constructor. It was his success with his flexible frame karts that led him to try United States Auto Club (USAC) racing in 1964 and 1965. 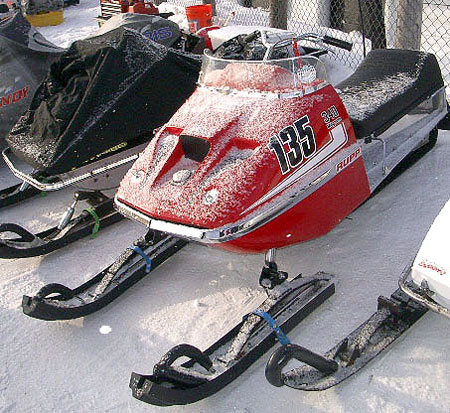 You’ll find Rupp ‘racers’ at popular vintage racing events like the one in Eagle River, Wis.

Mickey Rupp could have been a successful competitor in USAC as his sixth place finish at the 1965 Indianapolis 500 proved. He qualified 15th with an average speed of 154.83 miles per hour and finished second to Mario Andretti for rookie of the year honors. But, he realized that he couldn’t be both a successful racer and still meet the demands of his startup business. He gave up auto racing to concentrate on his fledgling Rupp snowmobile company. He ventured back to auto racing in the 1978 F5000 series, but that was after he left snowmobiling.

Although Rupp snowmobile history lasted less than a decade, the sleds produced in Mansfield had an impact. Rupps were aluminum-bodied for lightness and featured Rupp engineered, but Tohatsu-built motors. While Mickey Rupp recognized the advantage of having his own engine supplier, the concept proved unworkable as economic conditions fueled by poor snow winters and an oversupply of snowmobiles in the pipeline would force him to sell out to an investment group.

The new group kept the Rupp name but went with commonly available Kohler engines for many models. In the final stages of Rupp snowmobiles, there would be a Xenoah-built, liquid-cooled twin cylinder engine that would give Rupp its final glory. Bright red in color, Rupps stood out on the snow, both for their styling and their performance. 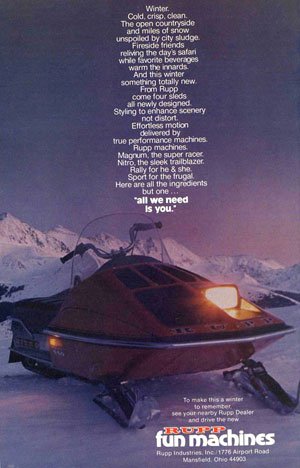 One of my favorite snowmobiles was a 1976 Rupp Nitro 340. It was a true performance sled that could eat up many larger displacement machines of its day. The 440cc version was even stronger.

Before giving up the financially challenged company, Mickey Rupp and his engineers envisioned a Rupp powered with such an engine. The Xenoah twin was hearty and seemingly even a bit over-engineered in comparison to other performance twins of the time. It came with a stout crankshaft and bearings that could survive the excesses of racer modifications. In stock form the 440cc version could reach 80 mph in 1,320 feet as tested by one of the leading snowmobile publications. That was the best mark achieved in the publication’s head-to-head running of 26 snowmobiles and was a full seven miles per hour faster than the next best performance model sled.

If you look at a vintage Rupp Nitro 440, note that its Xenoah twin sits tilted back and low in the engine bay. This is a hallmark of modern performance sleds, but Rupp was a pioneer in the 1970s. And for the same reasons — lower center of gravity for handling and cornering stability. The Xenoah twin would be taken for granted in 2008, but in the mid-1970s, reed valve induction was not all that common for trail sleds. Pulling that reed-inducted fuel charge through the combustion chamber was a tuned set of twin pipes.

Getting performance out of the engine was one thing, but retaining it required attention to detail when it came to cooling the beast. Rupp engineers specified an automotive-style radiator with an automotive-type, pulley-driven water pump and thermostat to maintain consistent cooling. To our knowledge Rupp’s Nitro was unique as it incorporated the use of the front bumper assembly to function as a cooling element. The extruded aluminum front bumper was hollow so engine coolant could flow through it and be cooled by snow and cold air. Engineers claimed that this hollowed bumper and radiator combination would be sufficient for any trail speeds. In our experience with a 1976 Nitro 340 we never encountered a problem. Though the ‘cooling’ bumper concept was unique to Rupp, the use of hollowed extruded aluminum for cooling would be used — and proven — by Polaris in its TX-L as well as later performance models.

Because the Nitro brought lessons learned from oval racing, the trail version featured an enhanced ski stance and revised spindle geometry that made the sled extremely nimble and very easy to steer. At just over 400 pounds, the Rupp Nitro was one of 1976’s best handling sleds.

The aluminum-tunneled Nitro came with Rupp Rails, a proprietary slide suspension design, and a 16.5-inch involute drive. As was the standard of the day, the front suspension featured shock-assisted leaf sprung skis.

Had Mickey Rupp still held on to the company that bore his name, he would have approved of the Nitro. This trail speedster may have sold for a premium US$1,895.00, but the 1976 Rupp Nitro 440 paid off with its performance. Unfortunately the new investment group couldn’t keep Rupp afloat and the brand became snowmobile history as of 1978.

As for Mansfield, Ohio, and Mickey Rupp? The town is still home to Gorman-Rupp pumps and its native son, now in his 70s. Mickey Rupp didn’t let the loss of his snowmobile company hold him down. He went on to race vintage warplanes — a P51 Mustang — and founded Florida-based Rupp Marine, which continues to manufacture outriggers and other sport fishing hardware. But for us snowmobilers, we remember Mickey Rupp for the sleds that bore his name and established Mansfield, Ohio as a town that made snowmobile history for too short of a time.