Summits embrace the next step in powder performance

Last month I watched the many YouTube videos on the 2011 and now the 2012 Summits by BRP Video. I agree with what these videos purport and agree that the 2012 Summit, a much refined XP, has evolved to be the powder and mountain master BRP initially designed the XP Summit to be. Time and pressure has produced a diamond.

As the Snowmobile.com mountain specialists we have been critical of the earlier XP Summit’s handling. That’s true. But, after a season on a 2011 XP Summit X 154 with Ski-Doo’s S-36 handling package, we’ve updated our opinions and turned 90-degrees. Now for 2012, the 800-powered Summits are more hauntingly beautiful – where nasty is sweet and bad is good.

In West Yellowstone this past March, Ski-Doo threw 800 Summit after 800 Summit at us to test ride. Ski-Doo believed in its product and had a point to make to us; their most staunch critic.

For model year 2012 Ski-Doo builds three Summit 800s, the Spring-buy only X, the come-in-and buy-it-when-you-want SP (95% X) and the budget-oriented but all-powerful Sport. 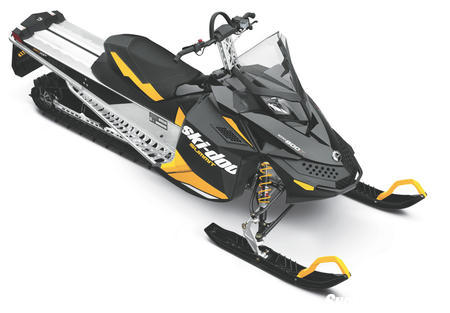 The “base” Summit mountain ride for 2012 features the twin-carb PowerTEK motor and modest shock package.

For these models, Ski-Doo took the S-36-equipped Summits and gave them more climbing ability, more sidehilling and tree running finesse, and handlebar leverage and rotation that’s mountain specific, depending on model. Ski-Doo’s Mountain Technical Team (MTC) listened to riders, dealers and the press alike, and refined the XP Summit chassis to be flickable and very light through the bars. Gone is the XP fight to keep its skis on the ground when sidehilling and when piloting the Summit in a wrong foot forward stance. Gone too is the XP handlebar slap when hitting a trench on a sidehill slice. 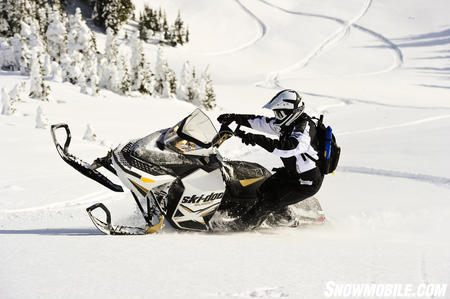 The Summit 800 X and SP are powered by BRP’s Rotax E-TEC electronic direct fuel injected 800 twin that has a displacement of 799.5cc, coming from a bore and stroke of 82mm by 75.7mm. This motor chucks out some gnarly horsepower, approximately 164.

The E-TEC 800R motor is said to use 15% less fuel and 50% less oil than the 800R PowerT.E.K motor. With reduced oil and fuel consumption comes reduced exhaust emissions. The E-TEC 800 uses voice-coil injectors, which control fuel delivery via wire-fed (coil) electric current that acts as an electromagnet to pressurize and release fuel at precise calculated rates. The exhaust valves are 3-D mapped through the computerized control module that allows the two-stroker to efficiently perform (build and hold horsepower) at low-, mid, and high-RPM levels. Because the engine’s control module generates excess heat as it pours through 8,000 calculations or more per second to control engine throttle inputs, Ski-Doo’s engineers built in a liquid-cooled loop to cool the control module. 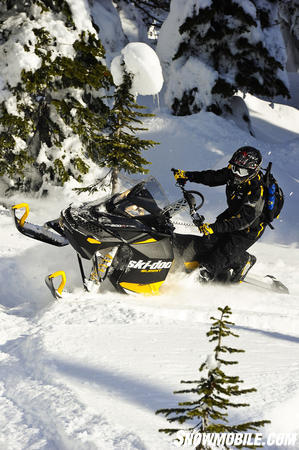 You’ll find the Summits can handle tight runs as easily as wide-open snowfields.
The 800 E-TEC equipped Summits come with a new dual air intake system that allows cold, fresh and snow-dust air from moving into the combustion chamber. This intake system, we acknowledge, is a welcome addition to the E-TEC.

The drive clutch for the three Summit models is BRP’s own TRA VII and the driven is BRP’s QRS; both have wide adjustment ranges, which are needed when hitting the mountains and the changing elevations.

The Sport version uses a motor from 2010 and back, the 800R Power T.E.K. This motor is a carb only motor, yet it has modern techie stuff like BRP’s Digital Program Manager (DPM) which monitors altitude and barometric pressure – to adjust fuel flow – and 3D-RAVE. Horsepower is 150-plus. The 800R P T.E.K. is proven, is tough and viable and has delivered reliable high-altitude performance for many years.

Let’s return to the high-end X. The 2011 Summit X 154 quieted our complaints about the early XP Summit’s heavy front end handling. The new 2012 is sweeter still with more finesse.

The new X has an improved all-aluminum tapered handlebar that mimics a motocross bike. Though the Summit retains its over-the-motor steering post (called laydown or horizontal), the new post and handlebar coupling has zeroed-out all quarrels between rider and sled, and has made the Summit X crash-diet light through the bars. 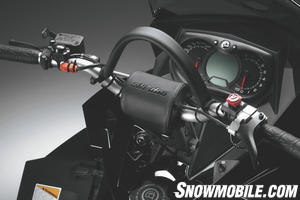 The Summit X handlebars are tapered aluminum and highlight this powder sled’s style.

For the X, Ski-Doo gave it a minimalist cockpit – simple handwarmer toggle, light dimmer, kill switch and RER (Rotax Electronic Reverse) button. Stationed at the cockpit is a dual analog/digital instrument pod that is minimalist too, but deep in communicating information.

Under its tunnel and mounted to the highly-controlled and smooth SC-5M rear suspension is a new monstrously aggressive track, the Powder Max II. This track for the X-model is the tallest OEM-supplied track, lugs are 2.5-inches. This remarkable track is lighter than the previous year’s 2.25-inch track due to hollow lugs. Remember, the Summit tracks are one-inch wider than the other OEM mountain tracks; width is 16-inches. Track lengths are 146, 154 and 163. With tall lugs and a wide footprint, the Summit X shores itself up as the leader in depth and width.

The X also comes equipped with seat storage. This new feature built into the XP X seat gives the Summit X an edge over the other OEMs; where the other three have moved away from seat storage. The rear seat compartment is deep enough (1.3 gallon capacity) to hold some nice vitals for that long hard day in the mountains.

The SP, which is 95% X, uses the same Powder Max II track and has the XP X seat with storage. Missing from the SP are the race-inspired aluminum handlebars. Track lengths are the same as the X, 146, 154 and 163. 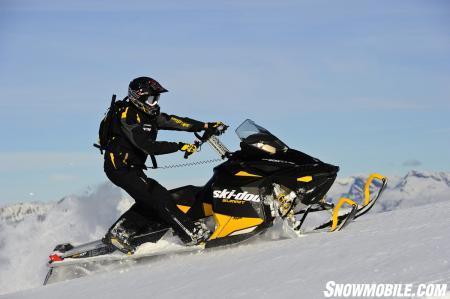 The Ski-Doo Summit SP with the long 163-inch PowderMax track is a proven climber.

Dry weights for the SP, according to Ski-Doo are: 459-pounds for the 146, 464-pounds for the 154, and 469-pounds for the 163. The SP model, for all lengths, is five-pounds heavier than the X due the fact the X uses more chromoly, has lighter HPG shocks and the lighter handlebars. One may say the SP is a refined 2011 Everest with a meatier track, awesome seat and softer swaybar.

Much is to be learned about the three Summit models, we encourage you to visit BRP’s website to learn more; study the tech info, compare the models and decide which is best for your needs. With that said, we must give rider impressions. 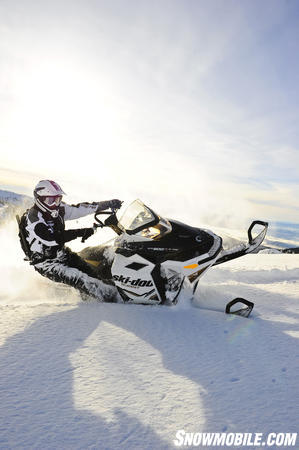 Ski-Doo’s premium Summit X comes in a white and black configuration.
Ski-Doo has chipped the rough edges from the XP Summit and thus for 2012 delivers a Summit we knew Ski-Doo envisioned. When the XP chassis came alive in its first year, BRP sold many. Then its front-end handling began to drive down sales (the weak economy didn’t help either). Yet, through continued refinements, the Summit has matured. Model-year 2011 was a game changer; model-year 2012, more so. Ski-Doo’s powder engineers have always had passion and for model year 2012 they score success plus.

For the X, the new tapered aluminum bars and softer sway bar give it effortless power steering-like control and nearly flat bar rotation. The X has a descent mountain strap, far better than the floppy rubber belt from 2011. The new 2.5-inch paddle Powder Max II under a gentle approach angle, delivers phenomenal flotation and climbing.

E-TEC power is smooth without peaks and valleys and is predictable when rolling in and out of the throttle.

The only nit we uncovered is the kill switch, which it easily falls and stops the motor when reefing on the bars in a standup position. Numerous times my chest protector hit the switch, halting momentum. We’d like to see Ski-Doo roll it forward or build a housing around it.

The 163 is a high climber. If driving a 163, consider shortening the front limiter to keep it flat when ascending. Generally, long tracks, 160-plus tracks, tend to pick up the nose when climbing.

At one point, in waist-high deep powder, I throttled down a hill on a 163 where thick trees blocked the sunlight. Being in charge, I flipped the 163 X on its left side panel, wrong foot forward, and threw down a smartly controlled descent. That felt good.

When first riding the Summits, you may look at the narrow ski stance and wonder if the sled will stay upright on the trails. Don’t worry about it. The Summit with S-36 is as stable as the 2008, 2009 and 2010 when the stance was wide and no S-36 existed. Ride quality is a 10.

In my opinion the 2012 Summit X 154 may be the best there is on the snow for this upcoming mountain riding season. 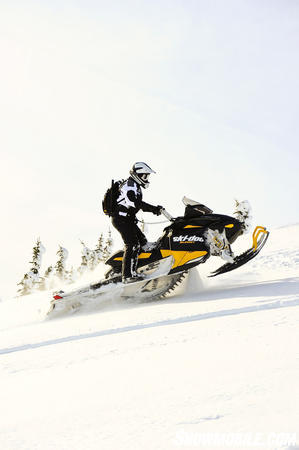 The combination of a powerful E-TEC twin and 16-inch wide footprint makes the 2012 Summit a top performer.
The 2012 Ski-Doo Summits will hit the dealers this fall refined from model year 2011. Refinements are in the S-36 suspension, E-TEC motor, new handle bars on the X, under seat storage, and the new Powder Max 2.5 track — the tallest track in the industry on a stock sled. When I heard of motor and suspension improvements while attending Ski-Doo’s technical school, I shook my head, and asked myself “Where and how?” Our 2011 long term Summit X, in the area of motor and suspension was as good as it gets. But after spending ample time on the 2012s in West Yellowstone, BRP certainly delivered.

The 2012 E-TEC Summit X sled just plain rocks, its trail and backcountry handling is an outstanding and noticeable improvement from 2011. The new handlebars on the X felt right and the seat storage will be appreciated.

I tried to pick up on any performance loss down the trail by turning the taller track, but could find none. It is lighter than last year’s track. Therefore performance gains in the deep-and-steep came without compromise. What I learned from our 2011 800-class shootout, is that all our 800 mountain sleds were very competitive with each other. If one sled had an advantage over the other it was due to the snow conditions for that day and which track performed best in that snow; the next week, a different story. So the question is will the 2.5 track give the new Summit X and SP the edge? Mmm. I can’t wait.