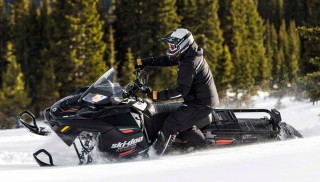 We doubt that any existing snowmobile manufacturer fills niches better than Ski-Doo. This is the company that created recreational snowmobiling back in the late 1950s and has continued to be a market leader ever since. So, when it comes to stretching the sled market, Ski-Doo does it better than any other brand.

Explore the latest Ski-Doo line of 2016 models and you literally can find a sled for any snowmobiling need. There are the sport MXZ models, two-up Grand Touring sleds and Summit models for mountain top adventuring. From recreation sport riding to pure utility, Ski-Doo really does have a sled for every need.

To achieve a line-up as complete as this, Ski-Doo engineers and marketers work hard to understand the needs and niches not just of snowmobilers but also of snowmobiling locales. This explains the Ski-Doo series of Expedition snowmobiles, which combine the comforts of touring with the versatility of a utility model and the off-trail capability of a Renegade. 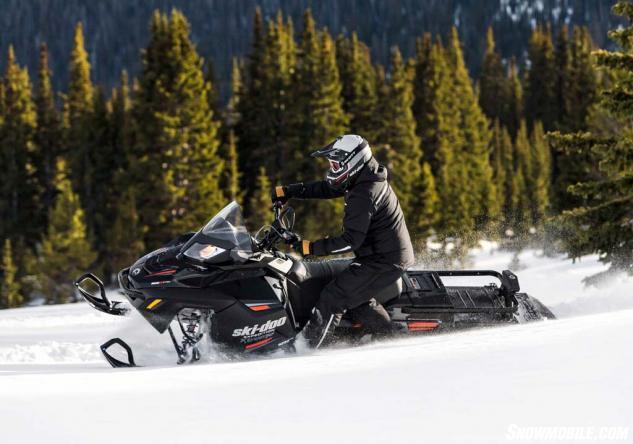 For model year 2016 there are four different Expedition versions, with the Expedition Xtreme being the most aggressive with a high-horsepower Rotax 800 E-TEC to turn the 154-inch long track. While the Xtreme will appeal to some riders, the bulk of snowmobilers will find the Expedition LE more suitable as it offers more suitable engine choices for two-up riding and chores. 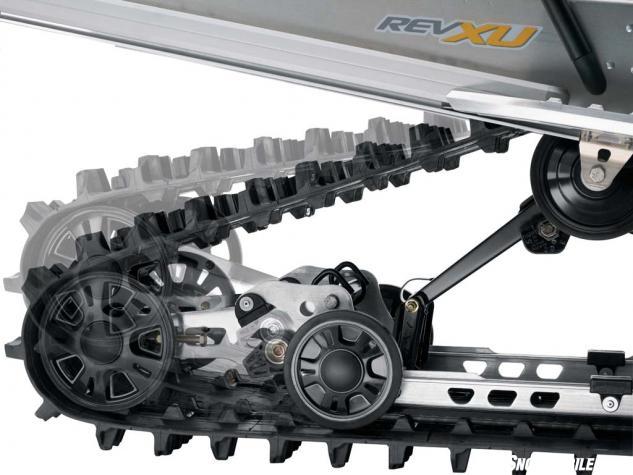 The Expedition LE’s 154-inch track length spins easily around a SC-5U extended length parallel rail suspension that features articulated rails that can locked into position for added traction when hauling or riding off trail.

Like the Xtreme, the LE is also built around the REV-XU “utility” chassis, a lightweight but work-ready design with the cabin and lower pan expressly adapted for over snow flotation. The LE can be considered the key model as it is available throughout the season and offers three impressive power options — the newly revised 1200 4-TEC, the proven 900 ACE liquid-cooled four-strokes or the popular 600cc E-TEC two-stroke. The four-stroke LE powerplants offer Ski-Doo’s multi-mode operation with three driving modes — Sport, Standard or ECO for maximum fuel operation.

Our preferred Expedition LE would be the 900 ACE version, which offers a smooth 90 horsepower that delivers power via Ski-Doo’s eDrive2, the second iteration of its unique primary drive. You might think the 115-ish horsepower 1200 4-TEC would be the obvious choice, but since the LE 900 ACE adds a two-speed synchromesh gearbox, we figure that combination can readily meet our needs and save nearly 25 pounds in overall weight. You can simply gear down to haul a load of firewood or a sleigh full of supplies. Pioneered by Ski-Doo’s Finland-based Lynx counterpart, the gearbox system was developed for the Scandinavian tundra where it has proven to be extremely reliable over the past two decades. Available to early season buyers, Ski-Doo’s top of the line Expedition SE overshadowed the “LE” with its air ride suspension and other amenities like tilt steering and a standard cargo box.

We also like the 900 ACE for its claimed fuel efficiency of almost 22 miles per gallon. Admittedly we’re underwhelmed with the 900 ACE powering a sporty MXZ, but it’s very smooth and efficient, making it our first choice for the Expedition LE. And while we also haven’t been real keen about the roll-over “flip” throttle on the 900 ACE that allows you to reposition the throttle flipper from thumb to finger operation, we find it helpful on the Expedition. On groomed trails, you won’t really need to flip the throttle lever, but going into the back country where you may need to slowly negotiate your way around forest debris like downed trees, branches or off camber gullies, the flip option is an asset. 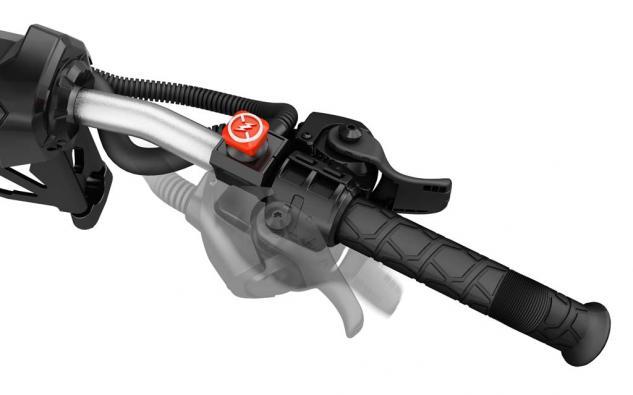 The roll-over “flip” throttle on the Expedition LE 900 ACE allows you to reposition the throttle flipper from thumb to finger operation, which could in back country riding.

Most snowmobilers will look at the Expedition and see a hulking sled with a massive 20-inch wide by 154-inch long track and a wide profile. Anyone that understands the purpose of the Expedition will see a cleverly engineered sled designed for some serious brush whacking. As a two-up touring sled, the Expedition LE will prove quite comfortable specifically due to its long track, which spins easily around a veteran SC-5U extended length parallel rail suspension that features articulated rails that can be locked into position for added traction when hauling or riding off trail. The 2016 LE adds the latest RAS2 front suspension with its revised steering geometry and lighter weight components that will reduce overall steering effort.

You should appreciate the LE’s seating area as it creates a very versatile environment for touring-type sitting or standup riding that you’ll do when venturing out in the boonies. You will appreciate the fact that the steel handlebars come with J-hook bar ends and that they sit tall off an 8-inch rider block. That handlebar also includes a grab strap if you want to extend a bit of body language to a turn or the inside of a slope. And, that capacious seat doesn’t just offer seemingly limitless space for you and your passenger, but it hides extremely generous underseat storage; remember the LE is also a utility option. 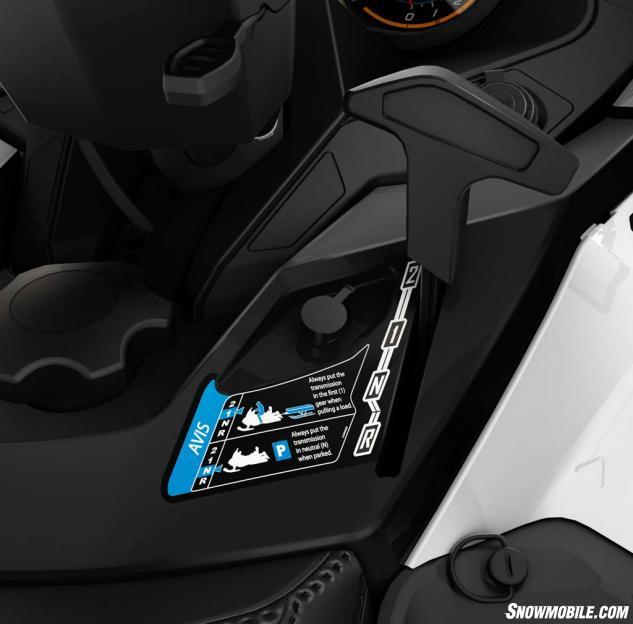 Pioneered by Ski-Doo’s Finland-based Lynx counterpart, the two-speed synchromesh gearbox system was developed for the Scandinavian tundra where it has proven to be extremely reliable over the past two decades.

A hulking presence or one that’s rugged and tough? That’s your call, we prefer to think of the LE’s styling as rugged, what with its curved planes leading into detailed hood ducts for cooling. With a chrome-like front bumper and metal rear rack brace, the LE states its case as a rugged winter personnel carrier that can also haul gear. Hook up to the standard tongue type rear hitch or add an optional space-filling rear cargo box to maximize utility.

Once underway, you can plug into a visor outlet or power up a GPS system with the onboard 12-volt outlet. The passenger grips are heated and protected with wind deflectors. The tall windshield sits 23-inches off the cowling to throw wind up and away from you. The rearview mirrors are standard as is electric start, a mechanical reverse, the synchromesh two-speed forward gearbox and a multi-function information cluster.

We recognize that the Expedition won’t be for everyone, but for those who need a smooth riding, on and off-trail two-up touring/utility sled with lots of character, the Expedition LE with the 900 ACE engine will be hard to top. It’s a comfy two-up passenger sled with incredible onboard storage that puts down an impressive 20-inch wide footprint for backcountry riding. That 900 ACE four-stroke triple is smooth and consistent and develops strong low end torque than can be amplified as needed via the two-speed tranny.

In the 2016 Expedition LE Ski-Doo brought together a little Grand Touring heritage and combined with Skandic backcountry utility and versatility in a package that only Ski-Doo engineering could have imagined. 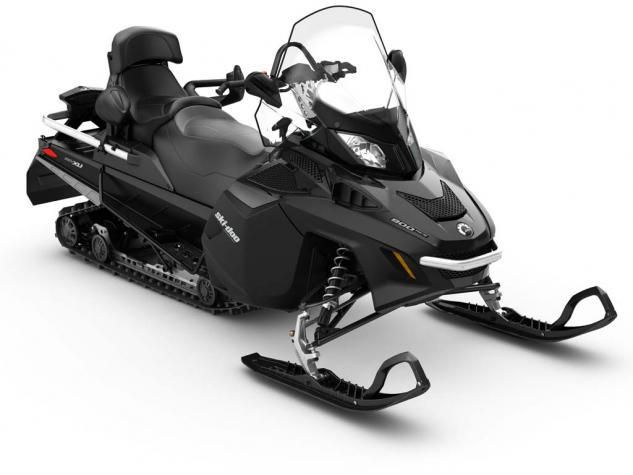