This born-again powder machine gets it right

Let’s step back a moment and go to Spring of 2003. That was when Yamaha introduced its RX-1 4-stroke snowmobiles, including both trail and mountain versions. The media and snowmobile enthusiasts alike buzzed like bees about this new 4-stroke venture, given that Yamaha rewrote motocross racing with its lightweight and powerful 4-stroke  motorcycles – the YZFs.

Yamaha’s evolution from 2-stroke power to 4-stroke power in its new Delta Box-chassis snowmobile came with challenges, especially in the mountain segment. The big issue there: weight. Weight is King. Not a fat King, but a lightweight and svelte King.

Soon after Yamaha’s RX-1 Mountain models hit the snow, aftermarket builders went to work designing and bolting on superchargers and turbochargers for the 4-stroke mill. With that came 300-plus horsepower RX-1 Mountains where merciless horsepower overpowered the RX-1’s weight, and a whole new mountain monster was born. The high horsepower Yamaha 4-stroke sleds were here to stay. They had left their mark on the mountain segment, or shall we say, the “high mark.” 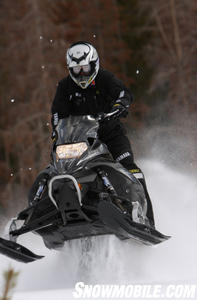 While the aftermarket mods were successful, the challenge for Yamaha was offering a stock version of its 4-stroke mountain snowmobile that would compete against its two stroke competitors — a high mountain order.

Yamaha remained committed to its 4-stroke program and two years later the entire RX-1 line was dumped in favor of the much improved Apex line with Yamaha paying particular attention to the mountain segment. Like the RX-1, the Apex was powered by a four-cylinder 4-stroke. But in 2008 Yamaha came out with a three-cylinder 4-stroke with the same displacement as the big four banger and slipped it into its FX Nytro.

We come to model year 2010 season and find that Yamaha again threw down its cards at the mountain man poker game and showed the world its much improved Nytro MTX – the SE. This move reflects the fact that the mountain segment is the fastest growing segment in the snowmobile industry.

Just as the original RX-1 Mountain had to evolve, the first year-build 2008 FX Nytro MTX also had to evolve. Our first year on this sled in 2008 left us with mixed impressions. Its trail power and handling were impressive. But in deep snow we wondered, “where did its horsepower go?” There was no question the Nytro’s tunnel design and steep track approach angle swallowed too much horsepower. The sled too easily hung up in the deep snow. Yamaha knew this then and went to work to zero-out the Nytro’s horsepower killers. 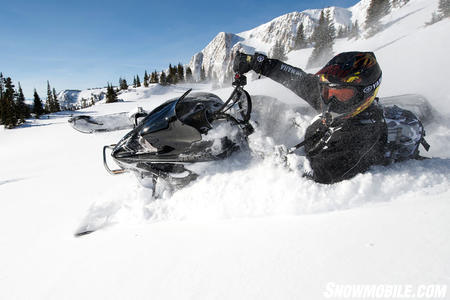 Yamaha has built an awesome companion for the steep and deep.

With 2008 being anti-climactic and 2009 being slim in customer sales, the 2010 Nytro MTX SE comes to market as it should have when first introduced. But, let’s look forward and not back. This new Nytro MTX SE shows vast improvements aimed at increased snowmobility (a term our Snowmobile.com Mountain Team created to reflect our criteria for powder sleds). 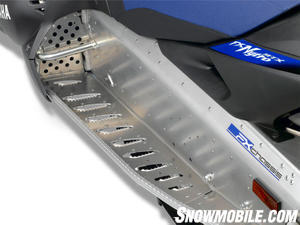 Punched out runningboard adds boot grip as well as evacuation for snow and slush. 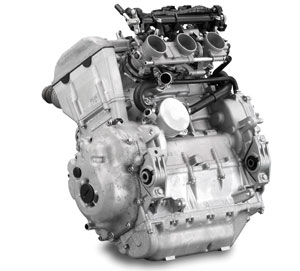 The new FXG2 front suspension with its adjustable 41-inch ski stance is designed to give optimum trail performance without sacrificing side hilling or deep snow throw downs. That too is good.

The Yamaha mountain team used the trial-and-error method until they landed on this frontend configuration. Yet the designers wanted more. The 2010 MTX-badged Nytro also comes with a new lightweight tunnel where the running boards are tipped up to an 11-degree angle, an increase of two degrees from the 2009 Nytro MTX. This two-degree tip up improves tunnel and runningboard clearance for deep snow conditions; this translates to less hanging up (resistance) from the running boards. Once again, very good.

Also, bigger evacuation holes were added to clear out unwanted snow from the runningboards.  Additionally, new tunnel stiffeners, relocated on the bottom of the runningboards, give the boards some needed strength.

Underneath the new tunnel is the real heart of MTX SE, the ProMountain Air rear suspension. Gone are the steel springs and control rods, and in their place, beginning with the rear swing arm, is a Fox Float 2XV shock. The added 2XV air chamber gives the needed air volume to give the right mountain-handling “feel.” Moving forward, the front swing arm uses a Fox FLOAT 2 shock. Yamaha worked closely with Fox to develop this shock, which has an added air chamber to aid in overall shock function. Here again, after countless hours of brain wracking, Yamaha and Fox believe they have landed on the best overall shock package for the MTX SE.

This semi-coupled suspension, combined with a “flat/shallow” 18-degree approach angle, a decrease of six-degrees (24) from the 2009 MTX, gives the 2010 MTX SE the sweet ability to pop up on top of the snow and keep going and going and going.

Another noticeable improvement on the Pro Mountain Air rear suspension are new, machined hyfax rails, that are lighter and stronger for durability. They’re great looking as well. Yamaha pulled from the rails, companion idler wheels and gave the FX Nytro MTX factory-installed ice-scratchers. When numbers are added, the Pro Mountain Air rear skid is 13-pounds lighter than the previous 2009 model. Woo-hoo good.

All 2010 Yamaha sleds come with replaceable idler wheels on the bearings; this to lower maintenance costs on the rear suspension.

Wrapped around the Pro Mountain Air is a new Yamaha and Camoplast-designed track. The big blue company utilizes Camoplast’s new single-ply track technology, which creates a stronger, but lighter tread. With that, Yamaha and Camoplast engineered into the track a new durometer (which is stiffness over flexibility) to knock down lug memory issues that plagued earlier versions of the track. This condition is where the lugs take a set — fold over — and don’t rebound to an aggressive stand-up position. 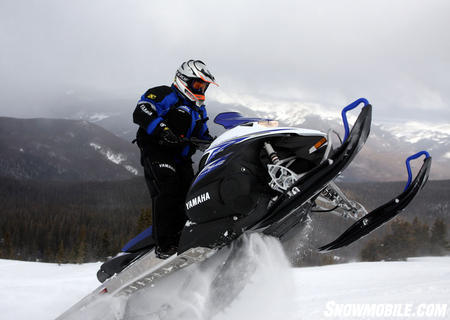 With its 130 horsepower even the base Nytro MTX can pack its skis up a mountain in the Colorado Rockies.

Yamaha paid attention to every detail on the 2010 MTX SE. For example, the company assessed its snowmobile hand warmers, found some weaknesses, and amped up the heat where needed and reduced heat where not needed. That’s important for rider comfort since the cowling and windshield offer virtually no hand wind protection.

All added up, the 2010 Nytro MTX SE came in with a 17-pound savings for the 162 version and 21-lbs savings for the 153 version. That is no small feat. When the FX Nytro MTX was first introduced in 2008, every detail was looked at in terms of weight, so moving two years later and finding an additional 21-pounds to take out from the original 153 version is nothing short of remarkable. This past March at model-year 2010 sled introductions in Grand Lake, Colo. is where we first placed our hands on the new FX Nytro MTX SE 162. We had to search vast areas to find deep snow to pound out the needed test results from the MTX’s new geometry, since an early thaw and freeze turned the powdery snow into concrete. When scoping out tree-covered North facing slopes, we found the needed fluff to assess the latest design from Yamaha.

As always the power developed by the Genesis 130 FI (electronic fuel-injected) engine more than adequately got the job done. We found the wider front end didn’t hamper its side hilling capabilities. Down the trail the new front end handled more like an XTX. Whatever the trail dished out the MTX SE handled it with confidence.

The Nytro chassis uses a horizontal steering post (also known as laydown), which positions the handlebars at the rider like a steering wheel.

We’ve mentioned many times about vertical verses horizontal steering posts; it’s no secret for mountain riding we prefer vertical steering posts as on the Apex MTX as it issues better body positioning for side hilling. This is an argument, which in time we are probably going to lose (Refer to our earlier article on steering posts). Vertical steering posts, also known as behind and under the motor steering, require more parts, and this translates to more weight and more manufacturing expense. Get the picture? We see the remaining hold-outs, Polaris and Cat, moving towards the simpler steering configuration; though we don’t care for it.

But, with all this being said, the FX Nytro MTX handles side hilling maneuvers very well; even downhill U-turns can be accomplished with some practice. 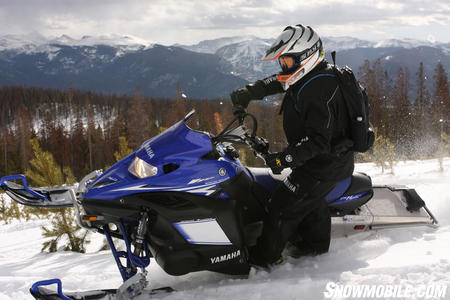 Yamaha engineers did a great job making the FX Nytro MTX SE feel light and responsive even on a side hill.

In the deep snow there was no question the MTX’s new tunnel, track approach angle, lighter track, rear skid and front-end geometry made the 2010 model a vast improvement from its yesteryear sibling. Many times where we would have been trenched in on the earlier models, the 2010 Nytro MTX SE 162 kept going.

We also found with its smooth 4-stroke power, the Nytro MTX is particularly fun to boondock — very easy to handle.

The Body, the Advantage, the Summation

On another note, Yamaha for 2010 teamed up with Rigby, Idaho based, Klim USA to provide Yamaha riders with Yamaha-branded Klim gear. Klim’s full snowmobile line will be offered to Yamaha dealers with the Yamaha/Klim logo. Over the years, Klim has become a popular line of snowmobile clothing because the stuff just plain works.

Not to end with clothing, Yamaha possesses great advantages as it’s #1 in reliability, fuel economy and resale value.

In summation, Yamaha Nytro MTX mountain riders will not be disappointed with the 2010 Yamaha Nytro MTX SE. MTX SE riders dressed in Yamaha/Klim gear, aboard this lighter, nimble, and better climbing sled, will defiantly stretch their kissers to big grins.