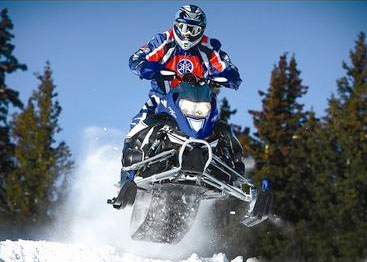 Reinvented Vector Sets the Bar in 2008

For Yamaha’s Apex and Phazer models, if you liked the 2007 versions, you’ll love the 2008s. There has been some nomenclature change along with new graphics on certain models.

The Apex crossover is now the LTX and the mountain sleds carry the MTX name and a new rear rack.

Overall, the Apex series remains true to its performance image with the nifty 4stroke, four-cylinder motor that puts about 150 horsepower. As with the Apex, the Phazer line underwent minimal change. All Yamahas will have at least one styling option designed to celebrate the company’s 40th anniversary of building sleds, including a period when Yamaha snowmobiles were number one in the marketplace.

One Phazer change is the addition of a new snow panel designed to reduce snow build up on the running boards. But power remains the same—80-hp from the 500cc twin—and some suspension packages have changed a bit to include clicker and ‘air’ shocks. Look for the Phazer FX to have disappeared and to be replaced with the name RTX. All else is essentially the same. Look for aggressive pricing as Yamaha uses the Phazer to entice cost-conscious buyers. 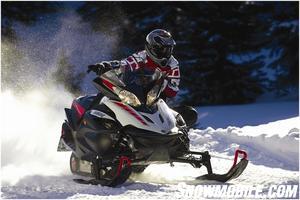 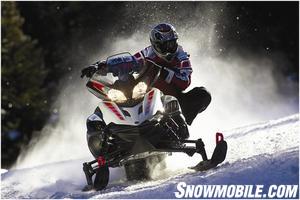 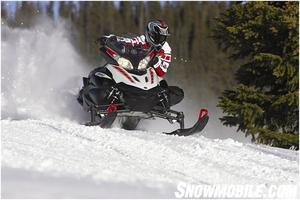 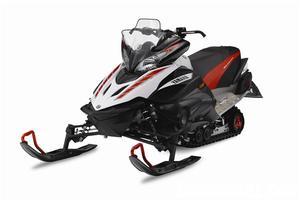 Vector—The Most Excellent All Around Snowmobile

We know that we are supposed to view the all-new Nytro as the big news for 2008, but we found the re-invention of the Vector as the biggest and most impressive surprise. Yamaha did this right in taking all the best features of the Apex, its chassis and rider ergonomics, and combining them with the best features of the previous Vector, 120-hp triple cylinder engine, fuel efficacy and pricing.

What you have is the best all around snowmobile in the marketplace. We really liked the Apex series, especially its rider-friendly seating, its overall cornering ability, and its general snow-ability. We liked the Vector’s power plant, feeling it was the most trail-friendly drive system on the market.

The 2008 Vector has no shortcomings. Because its engine is a cylinder shy of the Apex, the front end feels lighter and easier to steer. Because the Vector enjoys the rider-forward Apex positioning, you have a feeling of greater control over rough trails while maintaining the ability to slide back and relax while touring.

The new Vector retains the mono-shock with its remote adjustability dial on the side of the tunnel. The rear suspension has, of course, been recalibrated to accommodate the changes in the new Vector. The front suspension, which the Apex had adapted from the previous Vector, is recalibrated as well.

You’ll find various versions of the’08 Vector, including a sporty GT model and a longer tracked LTX, which replaces the Rage nameplate for the crossover model. The LTX uses a 136-inch long track. There is no mountain version as the all-new Nytro chassis and its more powerful 130-hp triple have been designated to replace the previous Vector mountain versions.

Yamaha makes no pretense about the Vector—new or older. It is the full-sized price leader for the company. Says one Yamaha spokesman: the key to the Vector is its 120-hp, fuel-efficient 4stroke and “price, price, price.”

According to Yamaha, Vector owners claimed getting upwards of 20 miles per gallon.

Now that the 120-hp engine is in the Apex-derived skin, the Vector has to be the best overall trail sled available. It can be sporty for exceptional cornering and overall handling.

The lighter weight front end is truly noticeable immediately. The engine has more than adequate performance from its triple carb setup. And how can you not like the 4stroke benefits of economy, reliability and long-term durability?

Yamaha’s big problem with the new Vector is going to be getting people to turn them in for another sled years down the trail. Or, maybe not, because this is a sled that the more you ride it, the more you’ll want to ride. So, maybe people will be turning them in because they’ll have so many miles on them they’ll need a newer one!

For us, this is an instant classic, one that has no downside. Great value at initial purchase. Great fuel efficiency. Wonderful ride. Vector is the best all around snowmobile you can buy in 2008!