From the snocross track to the hillclimb course, and from the ice oval to remote stretches of the Alaskan countryside, Polaris’ snowmobile racers are looking for wins and championships during the 2010-2011 season.

Polaris snocross racers have established a tradition of domination on snocross racing circuits across the snowbelt. Last winter’s performances added to that tradition as Polaris racers won season points titles on circuits from the Rockies to the East Coast.

“Last year I felt like the second half of the season went really, really well for us,” says Rager. “We worked through some small issues in the first half of season and had a very strong second half.”

Rager feels the 600 IQ Race Sled’s redesigned front end should help keep Polaris racers out in front of the competition.

“With the new front end and what we learned in the second half of last season, we’ll approach it like we approach every season, where we’ll go out and try to win every race we can,” says Rager. “We’ve got Ross Martin and TJ Gulla, who we lost [to injury] after Duluth last season, coming back, and I feel Levi [LaVallee] will be the healthiest he’s been heading to Duluth in the past two years. With those guys and Brett Bender, well, we’ve got a pretty good ‘front four,’ if you will.

“I think we’ll be fine in the Semi-Pro classes as well. Mike Bauer won one championship and was a couple points away from winning the other, and we’ve got Colby Crapo, so we should be pretty well set there, too.” 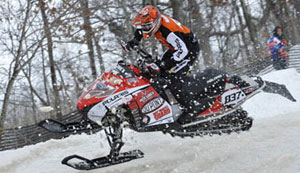 • For Team LaVallee, Levi LaVallee finished second in ISOC Pro Open points and seventh in Pro Super Stock points. He also earned a gold medal in Snowmobile Knock Out and a bronze in Snowmobile Best Trick at the 2010 Winter X Games, and for the second-straight year won the ISOC “Fan Favorite” award. Bobby LePage, who joins Team LaVallee this season, won points titles in both RMR Pro classes last season. 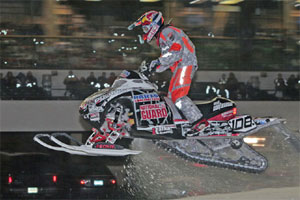 • Colby Crapo raced at only six of the seven events on the Mountain West Racing (MWR) schedule last winter, yet he earned enough points to win both the Pro Open and Pro Stock points titles. He was also the circuit’s overall leader in Pro points.

• The Bourque’s Polaris Snocross Racing Team from Cochrane, Ont., will be represented by Pro racer Dave Joanis, who will compete on the Canadian Snowmobile Racing Association (CSRA) circuit in both Pro classes (Open Mod and Stock), and will race at selected ISOC events. Last winter he finished third in CSRA Pro Stock points and eighth in Pro Open Mod points.

The Polaris heritage of cross-country excellence continues with racers such as Gabe Bunke. This seasoned Pro has raced at every event in United States Cross Country (USCC) history, and last season he finished third in USCC Pro Open points and fifth in the Pro 600 standings. He also finished second in the three-day I-500 racing on a Polaris RUSH sled.

Aaron Christensen finished fourth in Pro Open points on the USCC circuit last season and was sixth in Pro 600 points. Corey Davidson won the USCC’s Vets 30+ title, and was 11th in both Pro 600 and Pro Open points.

Bunke is working closely with Polaris engineers to dial in the race setup for the RUSH models, and he and his fellow Polaris racers will use the RUSH in selected cross-country races this winter.

Bunke will be joined on his race team this winter by up-and-comer Bobby Menne IV. Menne, who comes from a Polaris racing family, finished third in the USCC’s Expert 85 and Expert 85 Improved classes last season. Menne will race in Semi-Pro classes this coming season.

The 2010 Iron Dog was so demanding that only 12 of 29 Pro teams finished, and of the top 10 Pro teams to finish, five of them were on Polaris snowmobiles. Along with the winners, the other Polaris Pro teams in the top 10 were: James Sweetsir and Mark Tope in fifth place; Ryan Sottosanti and Jeremy Neeser in sixth; Louis Miller III and Louis Miller IV in seventh; and Kenny Johnson and Andy Lachinski in tenth.

The Polaris tradition of success on ice ovals continues with a strong contingent of racers who compete in the USSA Pro Star Oval Racing Series, at the Eagle River World Championship Snowmobile Derby, at the Canadian Power Toboggan Championships in Manitoba and elsewhere across the snowbelt.

Polaris hillclimbers are looking forward to another strong season on the Western slopes. Second-year Polaris Western Snowmobile Racing Coordinator Darin Gould said the team was mostly pleased by last winter’s results, but hoped to improve on its performance at the annual World Championship Snowmobile Hillclimb at Jackson Hole, Wyo.

The Polaris hillclimbers achieved great success last season on the Rocky Mountain Snowmobile Hillclimb Association (RMSHA) circuit, and will try to add King of the Hill honors at Jackson Hole to this winter’s titles.

“We had an excellent season last year and I expect this season to be as good and possibly better because of the equipment. I was really, really happy with last season,” says Gould .

Cole Willford won the RMSHA 600 Mod points title, finished third in 700 Mod and was fourth in 600 Stock points. He finished second in 600 Stock at Jackson Hole.