Little more than a year ago, both Honda and Yamaha equipped select ATV models with a form of electric power steering. At that time, we suggested that, since the system was simple in design and added to overall touring comfortability, why not add it to snowmobiles? Yamaha’s electric power steering (EPS) seems quite adaptable to its modern snowmobile line up.

We figured that adding EPS to touring and two-up machines—normally the heaviest models since they feature the most bells and whistles—would make them easier to enjoy on a long mileage tour. In Yamaha’s case, adding power-assist shouldn’t be that big of a deal. With its line of multi-cylinder, 4stroke-engined sleds, Yamaha is not the lightweight leader of the industry. But adding EPS might alleviate some of that heavy-steering feeling and actually make their sleds seem lighter and more nimble on the trail. 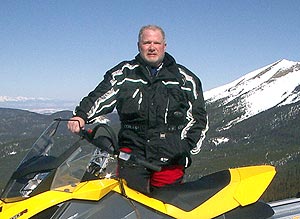 Yamaha is not alone in the heavy steering category. If Yamaha adds EPS to select models in a future season or two, we could see Arctic Cat and Polaris opting in with an EPS system of their own, especially on their 4stroke models. Polaris’ front-heavy Weber-engine turbo models could really use a boost in its steering.

So, why do we think that Yamaha has plans for EPS? Let’s just say that a little exploratory patent searching unearthed a description of a snowmobile power steering system that was applied for in late August 2006. Examining the documentation presented to the US Patent Office, the power-assisting device bears an uncanny similarity to the EPS device used on Yamaha’s Grizzly ATV. The difference here is that adding assisted power steering is a bit more complicated. Since Yamaha engineers are nearly pathological about maintaining their sled’s center of balance, any added power steering device has to (literally) fit into that engineering plan.

If EPS appears on future Yamaha snowmobiles, it may fit into the sled like this. Note that the EPS motor at the bottom of the steering shaft sits centered in the sled’s centralized mass area. 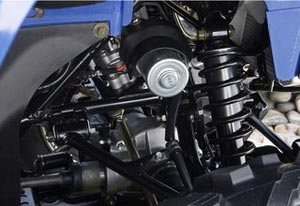 This electronic power steering system is used on Yamaha’s Grizzly ATV. It’s simple and effective. Is it a harbinger of EPS for sleds?

To accomplish this, the EPS is mounted on the steering where the post diverges to the steering linkage. This keeps the device centered in the chassis and slightly above the engine. Keeping in mind that Yamaha 4strokes already come with ample electric power for the standard electric start and optional DC outlet(s), powering an electric assist motor is no big deal. With the EPS positioned as indicated in the patent drawings, we would expect the added weight to be negligible when compared to the benefit.

The EPS proposed would consist mainly of three pieces: a steering angle sensor, a controller, and a motor to power the steering arm(s). In this proposed usage the motor operated between the steering shaft and the steering linkages.

Where would we expect EPS to show up? Hmm, let’s see. The diagram shows a sled that appears in side profile to be a Vector but the engine position seems to show a four-cylinder motor. However, we expect that this is a convenience as the patent references other engine configurations—including V-shape, boxer and differences in cylinder and displacement. In the contents of the patent, references cite power steering as reducing the effort a rider uses to steer the vehicle, especially when the sled is front heavy and traveling at high speeds. That might suggest the Apex could be the harbinger of EPS.

Looking at things from Yamaha’s point of view is dangerous, as over the past five seasons, the 4stroke sled maker springs the unexpected on a regular basis. It would seem that the top-of-the-food chain Apex may be due for an upgrade as the Vector got a substantial dressing up for 2008. The Venture would seem most likely to get EPS in more normal times, but sales of two-up touring machines is very small. Still, rolling out a new-to-snowmobiling technology like EPS might benefit from a low stress introduction. But is that Yamaha’s style?

We figure that EPS might best be served on an Apex luxury model with high performance and lots of features. Maybe even on an extended track version like the LTX where extra track length increases overall steering effort. Making an effort to lighten that load would be a plus!

Enough of trying to glean something for the future world of snowmobiling from the US Patent Office. We managed to uncover ideas for ski brakes on snowmobiles and even some thought about creating antilock braking. Just applying for a patent doesn’t mean it will ever make its way on to a snowmobile. But, then again, it doesn’t mean it won’t. Let’s see where Yamaha goes with this idea.