How can we grow snowmobiling beyond 'family sport' status?

Scrolling over the official International Snowmobile Manufacturers Association’s (ISMA) website leaves me a bit confused. There’s no big dispute with the data found there. It just seems to me that if the Big Four snowmobile makers—Arctic Cat, Polaris, Ski-Doo and Yamaha—are on the same statistical page as ISMA, then the promotion of our sport should be a little different?

According to ISMA data, the average snowmobiler is 42 years old; has 18 years of riding experience; rides more than 800 miles per season; and rides marked or groomed trails, of which there are more than 225,000 miles. Then there is the interesting fact that 40% of all snowmobilers are 50 or older—17% are older than 60. Snowmobiling’s clearinghouse for information also points out that “snowmobiling is a great family activity. It is an activity that keeps parents and kids together.”

Again, no big argument with the data. But if this is all true, why are most of the snowmobile advertisements promoting high-performance? Why are sled makers so heavily invested in snocross racing? We certainly have nothing against high-performance sleds. They’re the first ones we grab when given a chance to do a test ride. Really, we ask because we are a bit confused as to why the ISMA data seems to stress the responsible family fellow and the manufacturers’ message to the public seems to stress the hot rod. 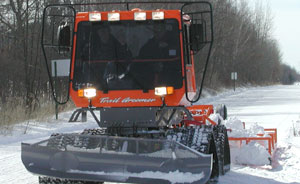 Most snowmobilers rarely think about the trail groomer operator unless he hasn’t been out on the trail. But who’s going to replace today’s legion of operators in the future? No trails means no sport!

We ask because according to concerned snowmobilers with whom we’ve chatted in recent months, there is concern that snowmobiling is not the social family sport it once was. Now, maybe this is a generational thing—you know, the old ‘back in my day’ argument. While that may be a part of it, we think there is something worth looking at here and a concern that maybe, just maybe, the sled makers and the snowmobile business are pursuing a false idol of youthful buyers.

If the ISMA data is right on, the sleds people are buying should be more trail oriented and less high performance. We’d like to think the emphasis on the power-seeking wild child is temporary. A lack of fruitful snow-filled winters has left sled makers with only two energetic buying groups: the high performance trail rider and the deep powder thrill seeker. My guess is that these two groups do not fall into the 42-year-old average age category. We’d guess they are a bit younger—probably with girl- or boyfriends but without serious family responsibilities yet.

So, what’s the point, you ask? The point is simply this: we hope that snowmobiling is still a family sport, but we’re not sure. We hope that up and coming young people become the heart of the sport to replace the current crop of aging snowmobile club and association leaders. But we’re not so sure. We hope all this is true, because without true family-oriented, energetic people forming the ranks of snowmobiling, the sport does not appear to be growing. If 17% of all snowmobilers are 60 and older, how long is their shelf life? If the average age of all snowmobilers is 42 and 40% of snowmobilers are older than 50, does that mean that a significant snowmobile population has only eight years to get its future together?

A snowmobile dealer once told us that if snowmobile racing went away, the sport would survive quite well. But, he said, if the trails disappeared, so would the sport. The heartbeat of snowmobiling is its system of snowmobile trails. Ski-Doo management recognized this way back in the 1960s and is the reason Quebec became a test bed for snowmobile trail development. As founder of both Polaris and Arctic Cat, Edgar Hetteen has often told of how inventing the snowmobile was never as important as creating the infrastructure of trails and dealer networks.

In the earliest days of snowmobiling, it was the user group working with the manufacturers who created the sport. It really wasn’t the other way around, as the selective memory of many in the manufacturing group would have it. Snowmobile clubs were organized as social get-togethers of like-minded recreationists. These were family snowmobilers. These were the people that ISMA would have us believe run the sport today.

Truth is, club and association leaders understand that they are important to the well being of the sport, to its future. They’re concerned that there are too few to follow in their tracks.

As Elmer Cone, president of the International Snowmobile Hall of Fame says: “Families are too busy to belong to clubs today.” He knows first-hand as a volunteer himself and as one who works to honor volunteers through ISHOF how much volunteers contribute. Local snowmobile club members in central Minnesota have told us how difficult it is to get new members to their clubs. While social in some respects, many clubs are what can be called ‘working’ clubs. The membership maintains set sections of trails—going out at night to groom trails in 20 degree below zero temperatures. These volunteers risk getting stuck in swamps and bogs as they charge along at five to eight miles per hour knocking moguls into smoothed trailways. These fellows wonder who will take their place?

We wonder as well. This is where we see the need for a shift in thinking coming from the snowmobile manufacturers. Whether it comes via ISMA or themselves as individual companies, there is a huge need for a revitalization of snowmobiling’s infrastructure of clubs and associations. We have seen Polaris offer grants-in-aid to ATV groups and once upon a time the company was a strong grant-in-aid supporter of snowmobile clubs. There is still a need for this type of effort.

What do we think needs to be done? One, offer financial support to clubs. Two, create an industry-wide organization that is fully staffed to support clubs and associations with a backbone of support staff that can conduct public relations campaigns where and when necessary, create snow-state bureaus or offices to support local and state snowmobile associations with membership drives, public relations events and coordinated ride-ins. Coordinate local and regional groups in pro-active snowmobiling events.

Yeah, yeah, I can hear it now. All this is already being done. We agree. Much of its is being done, but apparently not enough to have it make an impact in enticing new snowmobile club members. We can hear the sled makers say that there just is not enough money to do this. Truth be told, there isn’t going to be any money if snowmobile trails disappear because there are not enough clubs and members to keep them.

Remember Ski-Doo’s support of the SnoPlan in the early 1970s? We’re willing to bet that a well-conceived SnoPlan for the 21st century would attract a new generation of snowmobilers while rejuvenating the sport.

Let’s see less of the same old thing and more of some real forward thinking for moving the sport ahead as the ‘family sport’ the snowmobile industry says we have. Let’s move forward together.