Two races into the 2008-09 United States Cross-Country (USCC) season, Team Arctic’s D.J. Ekre has made it perfectly clear he’s the guy to beat in the Pro Open class, this time winning at the Grafton Equipment 100 in Grafton, ND. But his teammate Brian Dick has also made it clear that it’s going to be a battle, finishing less than one second behind in a dramatic two-lap battle.

Dan Ebert finished a close fourth with Ryan Simons in fifth, making it one of several Cat-dominated podiums during another stellar race that saw Team Arctic racers win eight classes and fill most of the podium positions.

The dominating performance in Pro Open set the stage for what looked like a repeat performance in the premier Pro 600 final. And for five of the six laps it played out as predicted, with Team Arctic’s Ryan Simons leading (based on time) while swapping fastest-lap honors with Ebert. 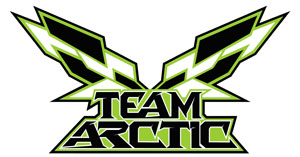 Heading into the sixth and final lap, Simons enjoyed an 11-second lead, but a deteriorating drive belt began to unravel, forcing Simons to reduce his speed in fast sections, which ultimately cost him the win, just five seconds out of first.

“I could tell that a cord was unwinding, so I babied it in as best I could,” says Simons. “Second place is better than blowing the belt completely and finishing back in the pack, so I’m satisfied with my decision.”

Ekre and Ebert finished fourth and fifth respectively, less than two minutes off the winning time.

In the other classes, Team Arctic racers delivered solid performances aboard their Sno Pro 600 race sleds. Jolene Bute returned to her winning ways in Pro Women.

For the second time in as many races, Spencer Fett nailed a strong second place in Semi Pro ranks, this time in the Improved class.

Adam Brandt edged out Erik Bute for top honors in the Amateur Improved class, with Mark Arneson and Stuart Brandt taking fourth and fifth, producing for a very green podium. Brandt did it again in the Amateur 600 class, this time ahead of Team Arctic’s Cody Matthews and Bute again for a class sweep.

Cole Lian and Adam Mach battled hard in the Juniors 10-13 class, with Lian taking the win by just eight seconds. Cole Davidson finished in third, making it yet another Team Arctic sweep. In the Junior 14-17 class, Stuart Brandt took the win by just one-hundredth of a second. And Garet Grzadzielewski won both 120 Class events.

“Winning eight classes, including the Pro Open, made Grafton another great event for our racers and teams,” says Team Arctic race manager, Mike Kloety. “The Sno Pro 600 continues to prove it’s one of our world’s fastest snowmobiles, as well as the most capable in the gnarly rough and bumps that define USCC terrain racing.

“Our racers, teams and sleds are poised to perform extremely well at the Red Lake I-500, the next race on the USCC schedule held Jan. 16-18 in Thief River Falls. Right now mechanical talents like Corey Berberich, Brian ‘Hector’ Olson, Steve Houle of Speedwerx, Brian Dick and Russ Ebert are working extra-hard to make sure all riders have the best set-ups for the I-500, and I know we’ll be ready.”