Hibbert Fights His Way to Sweep at Seneca Snocross

A week after suffering through is first loss of the season, Tucker Hibbert returned to form as the AMSOIL Championship Snocross series headed to upstate New York for the Seneca Allegany Casino Air Force Snocross.

In Friday night’s Pro Open main event, Hibbert (Monster Energy/Arctic Cat) shook off an opening lap get together with Levi LaVallee (Mystic/Loctite/Polaris), caused when LaVallee’s teammate, Kyle Pallin, over-shot a massive berm on the inside lane of corner two and literally dropped down onto the front of LaVallee’s sled. Right behind was Hibbert and the two had to lock up the brakes and come to a dead stop in order to avoid crashing into LaVallee. 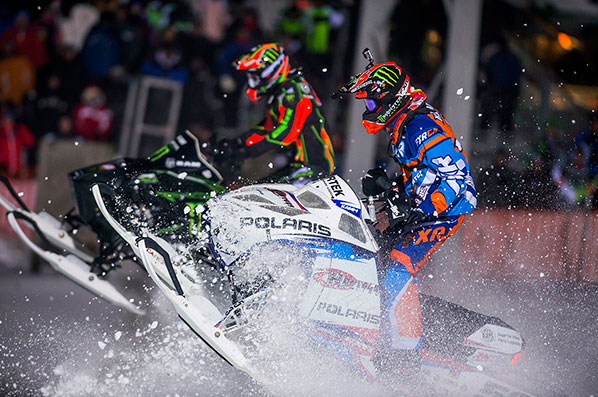 Kody Kamm and Tucker Hibbert fight for the lead in upstate New York.

Once things cleared up Pallin managed to pull things together and took the early lead, but was quickly caught and passed by Johan Lidman (Warnert Racing/Ski-Doo) – the No. 3 qualifier (behind Pallin & Hibbert). Lidman and Pallin swapped back and forth in the lead position in some excellent racing early on the 28-lap contest, until Pallin came off his sled on lap three.

Qualifying ninth and starting mid-pack, Kody Kamm (Hentges Racing/Polaris) came blasting in and quickly took the lead from Lidman. Hibbert, who had started around seventh place, was also on his horse – passing Logan Christian (Christian Bros. Racing/Arctic Cat) and Pallin to move up to fourth place. From there Hibbert took a breath – then set his site on the leader Kamm and second place Lidman.

“I got tangled up there at the start, then finally got up to the second and third place guys,” says Hibbert. “It took a bit to get by them, including Kody. He (Kamm) rode well for second place, hung right in there.”

Hibbert gained the lead on Kamm with a slick move to the outside lane and massive jump over the finish line – where he passed Kamm in the air. Once up front, the defending Pro Open class champ took charge and cruised through the last 10 laps for the win.

Kamm held strong for second, but was challenged at the end by Pallin – who cracked off the fasted lap times of the night in chasing (back) down the leaders.

“That was definitely some interesting racing,” says Pallin. “I made a couple mistakes early, but just kept picking off guys there towards the end and made it up here.”

Pallin got off to a great start in Saturday’s Pro Open main event, earning the Stud Boy holeshot in the process, while Hibbert and Cody Thomsen (Arctic Cat) were in hot pursuit.

For much of the first half of the race Hibbert marked Pallin in every corner, looking for a place to strike.

“I was trying to get by him and Kyle was riding really well,” says Hibbert. 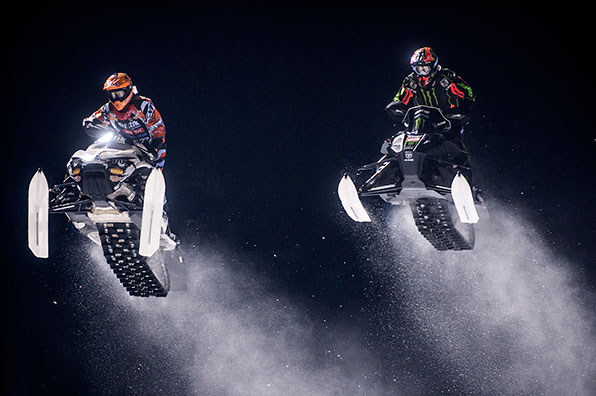 As he’s done nearly every race this season, Hibbert – biding his time versus Pallin – struck at the opportune time, passing Pallin through the air down a sugary straight and diving inside on the Michigan racer to take the lead. Hibbert quickly put some distance between himself and Pallin, but Pallin worked hard for a number of laps to stay close and stay clear of a hard-charging Kamm, who finished third.

“This is my third year racing the Pros and I learn more and more each race,” says Pallin. “It’s really starting to pay off. I’m having an awesome time.”

It looked to be a replay of Deadwood (S.D.) in the Pro Lite opener at Seneca Alleghany as Andrew Carlson (Carlson Motorsports/Polaris) yanked another monster holeshot from the outside gate pick, but the current Pro Lite points leader was forced to the outside on turn two and ended up dropping back and not being a factor to winner James Johnstad (Judnick Motorsports/Polaris) and the rest of the podium placers. 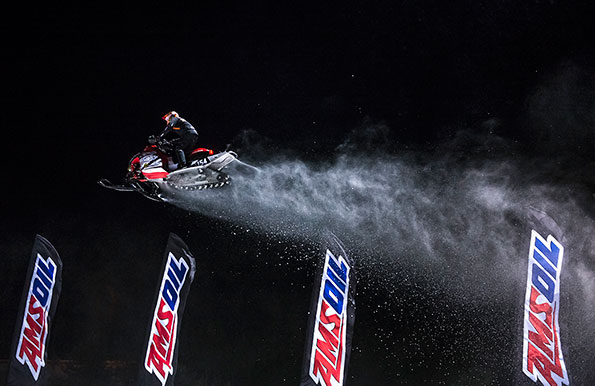 By lap three Johnstad had opened up on the rest of the field, with Corey Watkinson (Watkinson Racing/Arctic Cat) moving into second, Carlson in third and Chase Rosenmeyer (Team Bauerly/Ski-Doo) in fourth.

Local New Yorker Corin Todd (Leighton Motorsports/Polaris) made a charge to the front after a middle pack start, making a big run past Rosenmeyer and Carlson up into third place. As the laps clicked off quickly on short squared oval, Johnstad opened up a descent lead on Watkinson – only to run into lapped traffic and a caution flag. This allowed Watkinson to run right up onto Johnstad’s tail and actually bump the leader.

“The yellow flag and lappers clogged us up pretty good,” says Watkinson. “But James (Johnstad) rode really well. I’m just pleased to be up here in second place.”

As Johnstad controlled the final laps, Watkinson and Todd would put up equally consistent and fast laps and were not challenged in their runs for second and third places, respectively.

Todd moved up two spots on the podium in Saturday’s Pro Lite main event, parlaying a great start into a front-of-pack placement in the early going, then pulling a strategic pass on Carlson in mid-race and running home through the checkers. 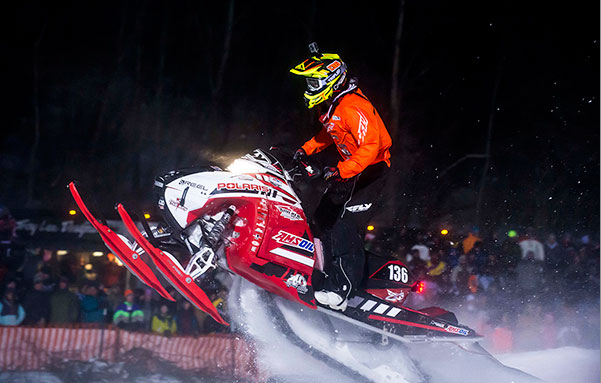 “I had a tough first round (of qualifying) and was able to pull it back together,” says Todd, who qualified in 10th position. “I said coming into this weekend I wanted to ride consistent and limit the errors. So I just put my head down and here we are on the box again.”

Carlson pulled the holeshot, but was quickly caught at the second turn by Friday winner, James Johnstad (Judnick Motorsports/Polaris). Todd came rocketing in out of seemingly nowhere and got past both Carlson and Johnstad and into the lead heading into lap three. The following lap Carlson passed Todd back for the lead, and took off – putting a bit of space between himself, Johnstad and Andrew Lieders (LaVallee/Mystic/Loctite/Polaris).

Choosing the outside line heading into the midway point of the 20-lap race, Todd was able to make up some time on Carlson before setting the point leader up and passing him on lap 12. Lieders soon passed Carlson as well on the ensuing lap.

Todd held onto the lead through the checkers, followed by Lieders and Carlson.