Tucker Hibbert got off to a great start at the rough and technical Buffalo River Race Park track in Glyndon, Minn., winning Friday’s Pro Open by almost 20 seconds. He ran into some trouble on Saturday, opening the door for Ross Martin to take the checkers.

An itchy throttle thumb got No. 2 Pro Open qualifier Ross Martin (DuPont/Jack Links/Polaris) in a whole heap of trouble on Friday. What looked to be a canon of a start for the No. 3-ranked Pro Open racer was soon turned into a black flag and a trip to the very back of the 15-sled pack. So that meant the holeshot would go to Hentges Racing/Polaris’ Justin Broberg, his first ever Pro Open holeshot. 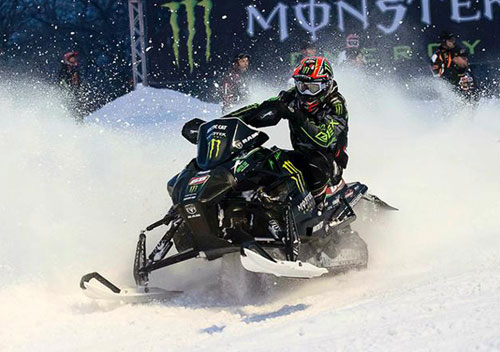 Martin’s creeping start would affect a number of other top qualifying racers, including the No. 1 qualifier with the first gate pick and overall Pro Open point leader Tucker Hibbert (Monster Energy/Arctic Cat). Seemingly pinched off at the start, Hibbert managed to come out of a bunched up pack of racers in fifth, then quickly moved up to third – and eventually second past Kody Kamm (Monster Energy/Hentges Racing/Polaris) before the end of the opening lap. Hibbert was closing on Martin when the black flag flew and Martin pulled over. From there Hibbert again made it look easy as he tamed the rugged track to the tune of a nearly 20-second victory at the end of the 18 laps.

“Yeah, Ross jumping the start threw me off, but I was able to make a few passes and get to the lead,” says Hibbert. “The track was super gnarly … feels good to win here at my home race.”

So with Martin watching the entire pack breeze by, Hibbert was followed by Kamm and Johan Lidman (Carlson Racing/Polaris). Kamm would miss a turn and take a ride out into the weeds, allowing Lidman to get past into second, but came back on the track in third with Broberg and Robbie Malinoski (Scheuring Speed Sports/AMSOIL/Ski-Doo) in fifth.

On lap 11 Malinoski would leave the track with what appeared to be an aggravated knee injury – something that’s been bothering him for the last several weeks. The following lap (12) Kamm would move past Lidman and into second. As the top three continued to separate from the rest of the field, fans at BRRP focused their attention on the charging Ross Martin, who’d made his way through nine of the world’s top premier Pro Open class racers and up to sixth place. Then, on the last lap, Martin would make amends for jumping the start by passing Logan Christian (Christian Brothers Racing/Arctic Cat) for fifth place, with Broberg in fourth.

Ross Martin got off to a much better start in Saturday’s Pro Open main event. While Kyle Pallin (Mystic Lubricants/Loctite/Polaris) grabbed the holeshot, Martin quickly made his way to the front of the pack via his inside line start and No. 1 gate pick as the day’s Pro Open qualifier. Hibbert was close behind in fourth place (qualified fourth as well) and was making his move up front when he left the track on the back portion of the race track and re-entered the track all the way back in 13th place.

Ross Martin leads a pack of riders on his way to victory in Saturday’s Pro Open main event.

At the same time as Hibbert had issues fellow Arctic Cat pilot Logan Christian (Christian Brothers Racing), who was running in second place at the time, pulled off the track and his night was ended. So this left Martin with a near three-second lead over Emil Ohman (Warnert Racing/Ski-Doo) and the defending AMSOIL Championship Snocross Pro Open champion Tim Tremblay (Scheuring Speed Sports/AMSOIL/Ski-Doo).

By lap seven of the 18-lap contest Martin had put nearly four seconds on the next-closest racer (Ohman) while Hibbert moved into the top ten. Tremblay would then put his head down and charge up to Ohman, getting past the Swedish great a couple laps later.

With Martin now holding off the hard-charging defending champ Tremblay, there was no way Hibbert – despite a spectacular run from last (eventually) into the top five – would be able to catch the leaders. The only question was if Tremblay could catch Martin, to which Martin would ride a wide sled the last couple laps and hold off Tremblay for the victory.

“Yesterday I was pretty disappointed, so I’m super happy to be up here tonight,” says Martin. “I just wanted to come in today and win. Qualified No. 1 and got the first gate pick and up front early. When I was up front I just had the biggest smile on my face. Put my head down and just went for it.”

For the defending Pro Open class champ Tremblay it was another podium finish, though his first win of the season would barely elude him again.

“I got a good start and made my way up to second and battled Ross, but I couldn’t get around him,” says Tremblay. “Glad there wasn’t a green sled on the podium (a reference to Hibbert’s dominance this year). I hope we can get a win before the end of the season.”

Third place in Saturday’s Pro Open main at BRRP would go to Ohman, who put in a strong race in holding off Pallin late.

Though Hibbert has a substantial lead in the overall Pro Open points chase, Martin broke up the virtual tie between himself and Tremblay heading into Saturday’s Pro Open main at BRRP and now leads the defending champ by five points (500-495) for the No. 2 position behind Hibbert (577 points). 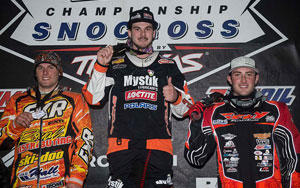 No. 1 qualifier Jake Scott (Mystic Lubricants/Loctite/Polaris) had the first gate pick, but it was Matt Pichner (Arctic Cat ) that got up front early and led the opening laps of the Pro Lite main event on Friday. Scott would tangle in the opening moments of the race with Dylan Hall (Royal Distributing/Ski-Doo), though both racers would remain upright and continued the spirited charge after Pichner.

On lap four Scott would move past Pichner for the lead – a lead he would extend to ten seconds over the next-closest racer en route to victory.

“Feels great to be up here,” says Scott. “I got a top three start and rode my own race. But most of all tonight I had fun out there.”

Once Hall got past Pichner as well, Andrew Carlson (Carlson Racing/Polaris) made his move on Pichner for the final podium spot but ended up getting bucked off his sled and out of podium contention. Second place overall point holder in the Pro Lite class, David Joanis (Royal Distributing/Ski-Doo), was moving up from the back row and into fifth place with six laps to go. Joanis then picked up two spots quickly, and was up into third place before a crash sent him flying and his sled upside down in a hole alongside the track.

With Joanis out Scott led Hall and Pichner, with Andrew Lieders (Leighton Motorsports/Polaris) up to fourth and Travis Muller (Warnert Racing/Ski-Doo) in fifth with five laps remaining. And though there was no question as to who was up front (Scott was up ten seconds at this point), it was anyone’s guess who’s round out the podium and a second separated the next four racers.

Muller would get past Pichner for third with one lap to go, then threw it away with only a few turns to go. Lieders would more or less then inherit the third and final podium spot behind Scott and Hall. 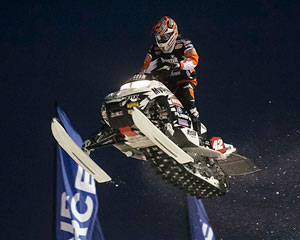 Jake Scott has been dominant in recent weeks.

Saturday’s Pro Lite main event was not short on drama. Jake Scott busted out to an early lead with Andrew Carlson and David Joanis in hot pursuit. It looked like the podium was all but decided with just a few laps to go as all hell broke loose when Carlson wadded up and Joanis ran over him.

As both racers on the ground (thankfully OK) and their sleds on their sides, Andrew Lieders and Joey Sagan (FR Motorsports/Ski-Doo) came blasting past and into the final two podium spots behind Scott. And though Travis Muller and Riley McClelland (McClelland Racing/Arctic Cat) would give chase, there weren’t enough laps left to catch Lieders (second) and Sagan (third).

And Scott was long gone.

“My second win of the weekend … I’m so pumped right now,” says Scott. “I got the holeshot and then just had fun racing out there and was able to win.”

With one round remaining (two races) Scott now has a sizable 59-point lead over second place overall Lieders.