Though the opening weekend of the 2011-12 ISOC AMSOIL Championship Snocross Series (ACSS) did not go Tucker Hibbert’s way, it was only a matter of time before the Arctic Cat pilot tasted victory this season. In fact, only a mechanical issue with his sled stopped it from happening twice at the Blackjack National in Michigan this past weekend.

In Pro Open main on Saturday, Dec. 10, Ski-Doo/AMSOIL’s Darrin Mees pulled the Stud Boy Holeshot, but was quickly passed by Hibbert and Judnick Motorsports/Polaris’ Ross Martin Martin on the ski hill’s first uphill section. Hibbert then got pinned between a couple of sleds right before the second turn and dropped back to fifth. Martin would put the hammer down and started clicking off some impressive laps in the open air, gaining a second-a-lap over then second place Robbie Malinoski (Ski-Doo/AMSOIL/Scheuring Speed Sports). 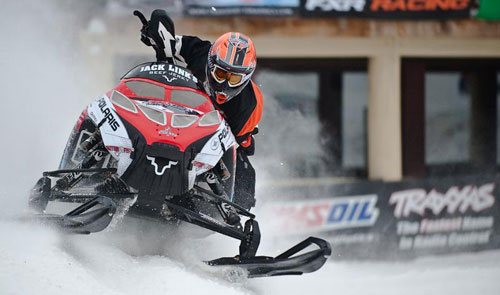 Lurking back in fifth, then fourth, Hibbert put on a phenomenal charge, first passing Tim Tremblay (Ski-Doo/Warnert Racing) on the uphill section in front of the Blackjack lodge, then catching Malinoski a lap later near the halfway point of the 14-lap race – making a pass stick at the base of the massive Dirty Dozen downhill section. 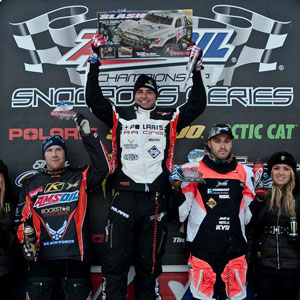 Martin was joined on the podium by Robbie Malinoski and Tim Tremblay.

Up front Martin was the only racer to triple out of the corner at the base of the big uphill, and continued to put time on the rest of the field – except for Hibbert. Tasting blood, Hibbert took multiple seconds off Martin’s lead to cut it to a second with four laps remaining. A burning 45.817-second lap by Hibbert would put him right on Martin’s mud flap. Hibbert would then put his sled up under Martin’s on the top of the first uphill – with the two coming together. In the lead for a moment, Hibbert’s right hand would go up – signaling that he’d suffered a mechanical issue due to the collision with Martin.

“I saw him pull over … that’s racing,” says Martin of Hibbert’s pass. “I’ve had my issues as well.”

With Hibbert limping around the track both Malinoski and Tremblay were able to get back past him to round out the podium. Hibbert would end up fourth.

No doubt fueled by Saturday’s tough loss, Hibbert came out with guns blazing in Sunday’s Pro Open main. He would need no furious comeback this time as he pulled a monstrous holeshot and checked out early, leading a field of the world’s best snowmobile racers to the checkers.

Qualifying No. 1 over Tremblay and Martin, Hibbert took the $500 Stud Boy holeshot and early lead. Setting the precedence immediately, Hibbert clocked the day’s fastest lap with a 42.8-second cooker to send a sharp message to the rest of the field.

“Tucker just grabbed the holeshot and ran away with it,” says Martin. “I give it up to them for working hard and coming back.”

Tucker Hibbert grabbed the holeshot in Sunday’s final and never looked back.

As the 14 laps clicked down in the Pro Open main event, Hibbert continued to put about a second-a-lap on the rest of the field, highlighted by completing a burly triple jump at the base of the big downhill section that no other rider was jumping.

“I felt good all weekend,” says Hibbert. “We took what happened on Saturday and used that to motivate us today. The track got a lot stickier as the day went on, and as a whole it was a tough track to race.”

Joining Hibbert and Martin on the podium was Malinoski, who finished second the day before.

Saturday’s Pro Lights main was all about Canadian David Joanis (Ski-Doo/FR Motorsports). Joanis qualified first and parlayed those qualifier efforts into the No. 1 podium spot. Joanis was joined on the podium by Sweden’s Petter Narsa (Ski-Doo/Boss Racing/Jimmy John’s) in second place and North Dakota’s Derek Ellis, also aboard a Boss Racing/Jimmy John’s Ski-Doo, in third place.

After a big wreck on the uphill section to open the Pro Light final was cleaned up, Joanis, Ellis and Narsa rocketed out front of the field of up-and-coming ISOC/ACSS Pro class racers. The two Ski-Doo/Boss Racing/Jimmy John’s pilots (Narsa and Ellis) remained in hot pursuit of Joanis, but were unable to close to closer than two seconds on the eventual winner. 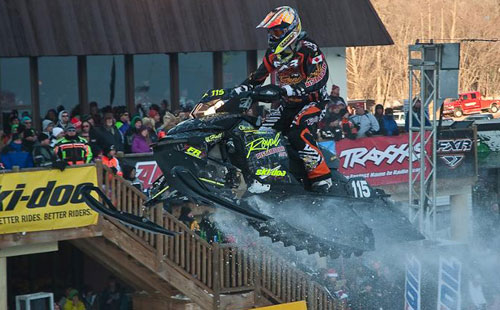 “It seemed a bit surreal out there,” says Joanis. “My Ski-Doo got me out first and I just fell into a good pace, stayed steady and smart and didn’t make any stupid mistakes – so that’s why I’m up here I guess.”

Narsa, who won the opening Pro Light race at Duluth this year, consistently put up the fastest laps in the main at Blackjack – running a number of sub-48 second laps in trying to catch Joanis, the fastest coming early in the race with a blistering 47.045. Helping complete the Ski-Doo sweep of the Blackjack Pro Light podium, Narsa now heads back to his native Sweden for what looks like the remainder of the North American competition snocross season. “I don’t really want to go, but I have to,” added Narsa. 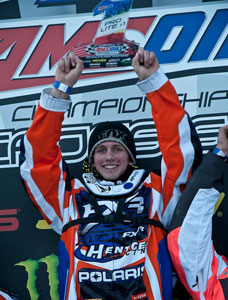 In Sunday’s Pro Lights main, Wisconsin’s Kody Kamm (Polaris/Hentges Racing) pulled the holeshot and took advantage of the No. 1 and 2 qualifiers – Narsa and Joanis – getting collected in a first turn crash and cruised to a six-second victory over second place Andrew Lieders (Polaris/Lieders Racing) and third place Travis Muller (Ski-Doo/Mueller Motorsports).

“I had a pretty good jump, bumped in to Andy (Lieders), held on and got the holeshot,” said Kamm, who won his second Pro Light class main of the season and moved into second place in the overall points behind Narsa. “From there I just rode a smart race and was able to win. Thanks to my mom and dad for letting me take time off school to come here and race!”

Six seconds back of Kamm in second place was Lieders, followed closely by Muller – who scored his first career Pro Light class podium. “I just let ‘er go and hung on,” says Muller. “Glad everyone came out today!”

In other action, Mike Schultz made a triumphant return to Gogebic County, the site of his horrific accident two years ago that resulted in the amputation of a leg. Schultz won a moto in the Pro/Am Plus class and ended up second in the main.