Team Arctic’s Tucker Hibbert continued his dominance of the 2009-10 AMSOIL Championship Snocross Series by sweeping the Pro classes at the U.S. Air Force National. Hibbert’s sweep, however, did not come without a great deal of difficulty.

Things started off splendidly for the Arctic Cat pilot in the Pro Super Stock final on Friday, Jan. 22 at Canterbury Park in Shakopee, Minn. Shortly after the uneventful start the pack of 15 went nearly 20 laps without many changes. Hibbert took an early lead, while teammate Dan Ebert and Polaris’ Brett Bender were close behind.

The pack stayed in those positions with few changes, other than Hibbert seemed to pick up speed and nearly lapped the entire field. Hibbert took the checkers nearly 32 seconds in front of second-place Ebert, while Bender completed the podium. Tim Tremblay (Ski-Doo) and Levi LaVallee (Polaris) rounded out the top five. 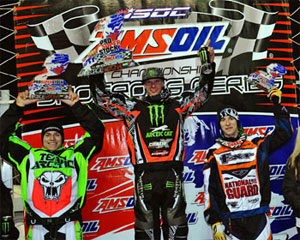 Saturday’s Pro Open final, however, would prove to be a much bigger challenge for Hibbert. After a bad start Hibbert found himself in eighth position for over half the race. Not to be denied, he poured on the steam and checked off drivers one by one in an unbelievably wild ride to the podium. Hibbert surprised even himself when he crossed the finish line in first.

“A lot of wild things were going on out there,” says Hibbert. “Just crazy things happened.”

One of the craziest was when Hibbert found himself half off his sled. His hands never left the handlebars, but his feet were dragging on the ground. He kicked and jumped back on the sled and continued on as if nothing even happened.

“I seriously don’t know how I got here,” Hibbert said on the podium. “That was the hardest I’ve ever had to work to get here.”

For nearly the entire race Ross Martin (Polaris) was in the lead. The track looked like a pinball game with riders bumping bars at nearly every turn. Martin had a good lead and stayed out in front. The order changed up several times in the 22-lap race giving the crowd the most incredible show to date on the circuit.

With four laps to go Hibbert was in second place going bar to bar with Martin when suddenly Hibbert turned on his jet pack and made the move to pass.

At the checkered it was Hibbert in first, Martin in second and Tim Tremblay in third place.

It was carnage on the track for the Semi-Pro Super Stock #1 final, which ended in a Polaris sweep. Yellow flags were flying nearly as fast as the first green with a tangle at the top of the table and a sled down on the bottom. A lap or two later the leader Kyle Pallin was black flagged for jumping on a yellow. This was one exciting race in the rain ending with Derek Ellis finishing in first place. Coming all the way from 13th place Mike Bauer managed to finish second, followed by Renaud Alexandre.

Christian Logan (Arctic Cat) saw nothing but rain and “really weird snow,” he said, during the Semi-Pro Open final. He started out in fourth place and just started passing riders. He didn’t know he had the first place position locked in and just ran his own race. It was a Ski-Doo Cat sandwich with Logan standing in the first place position on the podium flanked by Justin Broberg in second and Dylan Martin in third.

The Semi Pro Super Stock #2 final was chaos from the start with 15 riders taking the start. Before the first lap was half-way finished, the yellow flags started flying as sleds were tangled up all over. Soon the race was red flagged while officials attended to a down rider. The rider was cleared and OK and the race continued. 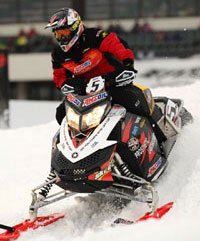 The second-start was nearly the same with drivers going all out. They managed to make it through the carnage to finish the final. In the end it was Derek Ellis (Polaris) in first place followed by Cody Thomsen (Arctic Cat) in second and Mike Bauer (Polaris) in third.

Perhaps the biggest news from Canterbury was the return of Monster Mike Schultz. Just over a year after losing his leg in a snocross accident, Schultz made his return to the Pro circuit. Schultz took on the competition in the Pro Plus 30 Super Stock class. Riding his Ski-Doo, Schultz not only finished the race, but he crossed the finish line if fifth place in the 14-rider field.