Tucker Hibbert struck first in the Pro Super Stock on Saturday, Mar. 5, but it didn’t come easy. Logan Christian (Arctic Cat) had his sights set on his first pro victory on the National Tour and jumped out to a solid lead. He looked to be in charge as title contenders Martin and Tim Tremblay (Ski-Doo) were detoured on the second lap.

Hibbert, who struggled through qualifying and went into the final trailing Martin in points, did not get the best of starts but managed to steadily work his way through the field. With seven laps to go and the leaders approaching lappers, Hibbert moved his Monster Energy Arctic Cat into a lead that would never be relinquished. Christian’s teammate Garth Kaufman continued his roll of the last several weeks, finishing third and giving Team Arctic a clean sweep on the podium.

Johan Lidman (Arctic Cat) had one of his stronger performances of the season running fourth until stumbling on the last lap, allowing Robbie Malinoski (Ski-Doo) and Emil Ohman (Ski-Doo) to round out the top five. 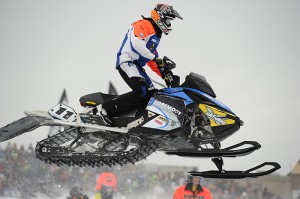 Tim Tremblay came achingly close to his first win of the season.

Much like Hibbert’s win in the Pro Super Stock, Martin had his work cut out for him in Sunday’s Pro Open final. Tremblay did just about everything necessary to capture his first win of the season, but it was a mechanical issue that slowed the Warnert Racing/Foremost Insurance/ Ski-Doo pilot and Martin capitalized.

Malinoski grabbed the StudBoy Holeshot Award but it was Martin, Tremblay and Lidman racing to the front in the opening laps. The battle continued this way until well past halfway when Tremblay made a move to the front. Farther back Hibbert was working through the pack, passing Dan Ebert (Arctic Cat), Malinoski and Lidman.

With two laps to go Tremblay and Martin bumped on the backstretch and it became apparent Tremblay’s No. 11 sled was slowing. Martin moved on to secure the win and a visibly dejected Tremblay limped his machine to the finish ahead of a charging Hibbert. Lidman held on for fourth ahead of Malinoski, capping a very successful weekend for the Carlson Racing/Sportech team. 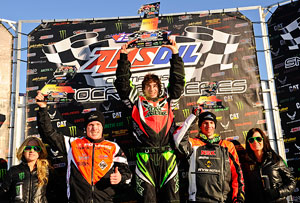 Kyle Pallin was on top of the podium after Saturday’s Semi-Pro final.

Kyle Pallin (Arctic Cat) scored his second win of the season in Saturday’s Semi-Pro Super Stock Day 1 final, sweeping both of his heat races and dominating the final wire to wire. The win propelled Pallin from fifth to third in season points, at least for one day.

Steady Mike Bauer was second on his Jack Link’s Polaris ahead of Kaven Benoit who has shown flashes of championship form on his Warnert Racing/NSK/Ski-Doo. Derek Ellis finished fourth ahead of Darrin Mees as the two Ski-Doo riders continue to slug it out for fourth and fifth in the season standings. Points leader Cody Thomsen (Arctic Cat) was off the pace finishing sixth, but maintains a healthy lead in the class. 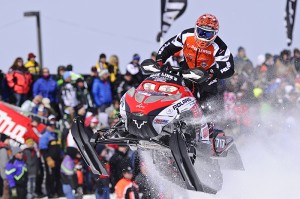 Mike Bauer finished the weekend on a high note.

Bauer improved on his second-place finish by winning Sunday’s Semi-Pro Super Stock Day 2 final in exciting fashion. Andrew Carlson (Arctic Cat) led the opening laps of the race and was in position for his first Semi-Pro podium. Over halfway through he continued to hold off Thomsen and an onslaught of challengers. Thomsen then made a rare mistake dropping several spots allowing Pallin and Kody Kamm (Polaris) to close in.

Bauer checked out with his sights on the win, while Carlson, Pallin and Kamm slugged it out. With less than a lap to go, Kamm snuck by both Pallin and Carlson to earn the number two spot on the box. The Cats of Pallin and Carlson traded paint in the last turn and down the homestretch, with Pallin edging out the rookie Semi-Pro for third.