After a weekend of tough racing, Warnert Racing’s Tim Tremblay clinched the Pro Stock Championship in his rookie season as a Pro with a strong second place finish. Following the on-track action Sunday, Warnert Racing was recognized as the ISOC Team of the Year at the annual awards banquet to cap off a stellar season for the entire team.

The final ISOC National Snocross Series event at Lake Geneva Wisconsin is always a special event where the best racers from circuits all over North America meet to put it on the line for one last time. The track is a rider and fan favorite with big hills, big jumps and rough whoop sections to separate the men from the boys. Team Warnert was prepared and it showed as Tremblay and Emil Ohman took podium spots and Steve Taylor crossed the line fifth in Saturday’s Pro Stock final for a dominating team performance.

The race unfolded with plenty of excitement as the racers scrambled from mid pack starts to see through the roost and fading day light while moving towards the front. Tremblay moved from fifth to second by lap 4 and made a big charge from there to close the gap on first with some risky lines, but taking signals from his mechanics backed it down for the last couple circuits to assure the championship win. Ohman had a brilliant ride to the front from a mid pack start but by the time he got to third the first two were out of reach. Ohman’s finish also gave him third place in the Pro Stock Season Championship – another great accomplishment for his first year as an ISOC Pro. 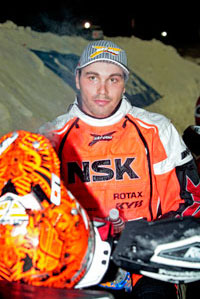 The Pro Open class on Sunday proved to be a little tougher for the team as Ohman came down with the flu and wasn’t going to make it through a full day of racing. But Tremblay and Taylor came through with strong efforts again to finish second and eighth in the season’s final race. The first turn melee left both riders upright but not in the front of the pack, so both dug deep to gather their end result – and another podium for the team – making it 15 for the year.

The Semi-Pro guys hit the track running hard – and their determination was evident as they qualified strongly both days. Justin Broberg had an outside shot at the Semi-Pro Open Championship, but needed the two racers in front of him to falter. Broberg raced hard in qualifying to move up a little, but in the final his third place finish wasn’t enough to get the title. Darrin Mees and Dylan Martin had uncharacteristically tough weekends with both riders making the finals but not finishing where they wanted to. Broberg’s third place gave the Semi-Pros 16 podium finishes for the.

After all the racing was done everyone gathered for the annual awards banquet where Warnert Racing collected a Pro Championship, Team of the Year award, and Tim Tremblay added a Rookie of the Year award to the honors taken in 2009-2010 by the team.

“We had a very successful season – I want to thank and congratulate all the team members for their dedicated efforts this year,” says Ron Warnert, team co-owner. “With a team of seven racers it takes a lot of talented people to make it work and we have that here at Warnert Racing – each of them should be proud of the job they did.

“And speaking for all the team members we want to thank our sponsors. Big or small your contribution is needed and appreciated. We recognize that without you none of this is possible and we’re very proud to represent you both on and off the race track”