The Fox FLOAT 2 air shocks deliver a definite step up in performance over the original FLOAT shocks by incorporating features from the Fox Evol X race shock. These key features include a negative spring for improved rebound and a new piston design for more precise damping. The FLOAT 2s are a high-performance trail, mountain riding and even race application shock that delivers a firm, progressive rate for taking on the roughest terrain. FLOAT 2s are standard equipment on Arctic Cat F-series Sno Pro sleds and Yamaha’s Apex SE as well as several Yamaha and Arctic Cat mountain sleds. While the FLOAT 2s are original equipment on several OEM models, FLOAT 2s are also available from aftermarket suppliers for all four brands.

To put the FLOAT 2s through its pace, I installed them on a 2008 Ski-Doo MX Z TNT, set the shocks to 65 pounds per square inch (psi) and negotiated the trails of Northern Minnesota. After navigating through a few corners, I noticed the shocks were far more firm than the stock shocks and roll resistance had improved, so the steering response was quicker. The shocks were very firm over small trail ripples and stutter bumps, but when encountering larger bumps, of the 1- to 2-foot variety, the shocks provided firm damping for the most aggressive riding. The faster I rode and the more I attacked the bumps the more the shocks provided confidence inspiring and predictable bump absorption. When jumping road approaches or launching off rolling hills on the trail, the shocks responded with solid control. From small to large bumps, the rebound was impressive as the shocks were always prepared to absorb the next anomaly on the trail. As hard as I tried, I could never get close to stroking through the entire travel and bottoming out the shock.

The FLOAT 2s give the MX Z TNT a high-tech appearance and aggressive damping in large bumps.

Using the hand air pump, I decided to dial the air pressure back to 50 psi for a softer more compliant trail calibration. The shocks were better through the small trail chatter (bumps up to 6-8 inches), but the softer setting still provided firm damping from mid-stroke on. It was evident that these shocks were influenced by race shocks and certainly the FLOAT 2 demonstrated the characteristics of a very aggressive shock. When I upped the pace over the bumps, the shocks delivered consistent control. The shocks ramped far quicker and hence far more progressive than stock Kayaba shocks, so the biggest bumps could be tackled. I further backed off the air pressure to 32 psi, so I could sample the ride characteristics at the low-end of the pressure scale. As one would expect, it was far softer than 65 psi, but at 32 psi the front end sag was more than 2 inches, which was not desirable. The shock would stroke through initial travel too quickly and would become very stiff as it transitioned into the upper half of the shock stroke. When selecting the ideal air pressure for the trail, most riders should find the desired damping characteristics between 35 and 70 psi. Below 35 psi I found that the sag was excessive, while much above 70 psi, the shocks are super stiff and feel ready to conquer a snocross track. 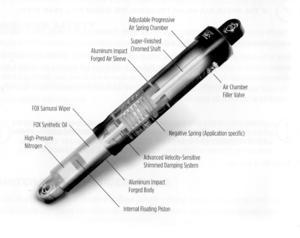 The FLOAT 2 component parts are shown in this fadeaway illustration. Click on the image for a closer look.

The FLOAT 2s provided very firm trail bump taming attributes, but as with most take-a-part shocks, whether air or IFP, revalving the internal shim stack will yield even better performance. Therefore, I brought the shocks to Bruce Schaapveld of B-Line Control in Lindstrom, Minnesota. Schaapveld is a master shock tuner and former race mechanic having prepared race sleds for cross-country legend Jack Struthers. Now he tunes shocks for Ski-Doo drag race phenom Craig Marchbank, freestyle Winter X Gold Medalist Justin Hoyer, and semi-pro snocross standout Derek Ellis, among many others. To get a feel for the actual spring rate of the shocks, FLOAT 2 with 32 lbs psi at 60 degrees Fahrenheit was mounted to an Intercomp spring scale. As expected, it demonstrated a very progressive rate. At 1 inch of compression it rated at 112 pounds, at 2 inches 160 pounds, at 3 inches 231 pounds and at 4.3 inches 450 pounds. Hence, you can see that the shocks are extremely progressive and from 3 to 4.3 inches of compression into the stroke, the spring nearly doubled. Upon disassembly, we discovered that the valve stack had .002 inch of rebound preload and essentially this squishes or spreads out the shims on the stack. The result is that preloaded shim stack provided a stiffer damping rate.

Schaapveld changed out the oil and the shims on the valve stack for a better trail calibration for my riding style and weight. He started out by improving the bypass circuit, so the piston would bleed more fluid at low speed and not rely on the valve stack for damping. Schaapveld, said, “Under real low speeds, it [FLOAT 2] acted like a position sensitive shock. I made the valve stack more progressive and put more increment in it. The rebound side has the preload shim on it, but the compression side didn’t have it. Initially, its [the damping rate] is softer, and there doesn’t have to be much valving in the high speed [compression] because there is so much spring rate.” After the shocks had been rebuilt, he set air pressure to 55 psi at 60 degrees Fahrenheit. Once aboard the sled, I found that the shocks took a significant step forward in overall performance and now I recognized a substantial improvement in low-speed damping on trail chatter and small bumps. When attacking the 1-foot and taller bumps, it felt like the shocks were stroking though more of its travel and the control and confidence was even better. Hitting the road approaches and launching off of moguls provided firm impact absorption and confidence inspiring control.

top. On the bottom, the internal floating piston is shown in the shock body.

To understand how these shocks operate, we need to examine the design and operation. The FLOAT stands for Fox Load Optimizing Air Technology, which means as more load is placed on the shock, it provides a stiffer damping rate to meet that load. The FLOAT 2s are lighter than most coil-over spring shocks and the FLOAT design effectively combines the function of the spring into an air chamber inside the shock.

With coil-over shocks, if you have riders of vastly different weights and riding styles, typically the stock spring needs to be swapped out in favor or a lighter or heavier spring. Using a hand air pump, you can add or remove air pressure from the internal air chamber on the FLOAT 2s to make a massive change in spring rate adjustment.

Air shocks and internal floating piston shocks share many design similarities and some obvious differences. Both air shocks and IFP aluminum shocks have a high-pressure nitrogen chamber, but the air shocks are lighter, and provide a unique high-tech appearance, which is immediately noticeable on any sled. The FLOAT 2s are built from 6061-T6 aluminum forgings. The air sleeve has been disassembled. The air sleeve cap is mounted in the vice the piston rod faces up. The air piston seal and slyde ring are shown in the middle. The negative spring is shown on top.

During testing, I discovered that the FLOAT 2s are sensitive to temperature change. The air pressure in the shocks increases as the air around the shock gets warmer. Therefore, air chamber pressure of 65 psi in a heated shop of about 60 degrees can drop 10 to 20 psi depending on the outside air temperature. A shift of 10 to 20 psi will have a dramatic effect on the shock’s damping qualities. Consequently, air pressure should be adjusted outside, so the correct air pressure and damping level is attained.

Race teams have recognized this aspect of air shock. If a snocross team is adding air to the shocks, the race mechanics will adjust the shocks outside to arrive at the desired air pressure level. Most of the high profile race teams inject nitrogen into the air chamber because it’s an inert gas that isn’t affected by temperature changes. Thus, the air pressure can be adjusted inside or out without a significant shift in air chamber pressure. 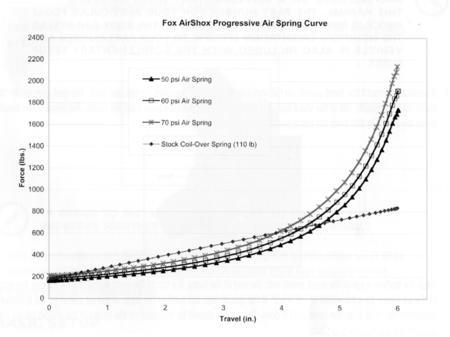 When the Float 2s stroke through their travel, the shock body slides inside the air sleeve. The shock body is similar to the shock shaft on an IFP shock, and this shock tube needs to be protected from rocks, debris, road grime and basically any and all elements that can pit, mar or damage the tube. Why? If the lower tube is damaged, contaminants will travel past the seal in the air sleeve, enter the oil and contaminate it. Eventually, the oil will get dirty, and ride quality will diminish. As a result, the shock body will need to be replaced. The shock body tubes cost about $200, and the seal kit is about $70 and then most shock tuners will charge about $60 for the rebuild, so you can see why it’s in your best interest to protect the sliding tube. Hence, the Fox Air Shox Body Guards are a wise investment to protect the shock body. 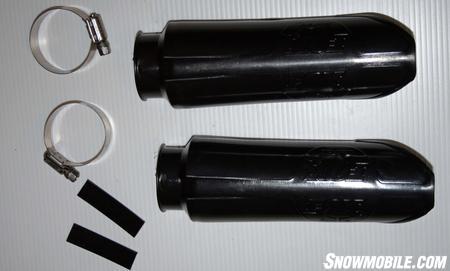 The Fox FLOAT Airshox Body Guards simply mount to the air sleeves with the pads and pipe straps to provide important protection against damage.