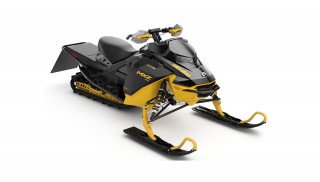 It’s getting to be that time of year, where next season’s machines are unveiled. Ski-Doo is returning its race-ready machine for next season—full press release below:

Snocross racing’s most dominant sled, the one independent racers can count on for out of the box podium performance, returns with some not so subtle refinements to remain a favorite for the top step in 2023. Four straight seasons of championship form, led by Elias Ishoel’s, Jordan Lebel’s and Malene Cottew’s ISOC crowns last season, hasn’t affected the team developing the MXZx 600RS as they continue to chase their own records and push for even more performance. The REV Gen4 platform continues to prove its flexibility and prowess for riders of all abilities, and that focus – making it fast, adaptable and reliable for all – remains the same formula for this season.

Most noticeable will be the yellow color update that maintains the Ski-Doo DNA, while other chassis and powertrain refinements ensure the winning ways continue. Changes focus mainly on better traction, faster corner speeds and a smoother ride to deliver better holeshots, faster overall lap times and less rider fatigue – but no stone is left unturned as engine and clutching improvements are constantly updated every year too.

The chassis changes start up front in the RAS RS suspension with new shocks that are shorter in overall length while maintaining the same travel to help lower the center of gravity, and spring rate has been increased to reduce roll, both changes support better cornering. The front suspension continues to feature a long spindle design that allows high cornering speeds and a unique power steering system exclusive to the MXZx RS race sled that provides ultra-precise handling with less effort.

The RAS RS front suspension updates are complemented by the redesigned rMotion RS rear suspension where the front arm is shortened and the rail mount is moved up for a flatter profile that results in less ski lift and more forward traction when on the throttle out of corners. The center shock also grows in length to position the front of the rail in more constant contact with the snow surface for better traction everywhere. The increased length also delivers more shock and suspension travel at the front and also provides a motion ratio closer to 1:1 (more linear) for better shock control, bump compliance and rider comfort. The rMotion RS’s rear arm mounting points are moved back, the shock travel is increased, and its motion ratio also gets closer to 1:1– these changes support a lower center of gravity, better traction and less ski lift out of turns to drive the sled forward faster. The coupling system is revised for a wider window of adjustment and there’s a new easily activated and more effective holeshot device.

The MXZ RS retains 46 mm KYB Pro Series shocks that have Integral Base Valves with the ability to adjust not only High and Low Speed Compression but also High Speed rebound and calibration has been updated to match the suspension geometry changes based on feedback from racers testing prototypes last winter.

The MXZx 600RS E-TEC uses the REV Gen4 platform with its open cockpit design and centrally balanced engine for superior rider ergonomics and handling in rough conditions. The REV Gen4 layout delivers agility and responsiveness while the Ergo Step side panels and beveled tunnel allow racers the room they need to attack the course – without interference from the chassis.

The Rotax 600RS E-TEC engine features E-TEC direct injection that consistently delivers quick response and perfect calibration no matter the altitude or weather conditions, allowing racers and their crew to have less to worry about. Features include booster injectors first deployed on the Rotax 850 E-TEC, a short intake tract with double reeds and digital eRAVE. Engine calibration refinement for 2023 focused on better low RPM and low vehicle speed responsiveness to provide more power out of deep holes or under heavy load conditions – letting racers accelerate faster.