This year's first ride meant more than ever before

There have been many first rides over the seasons. None meant as much this one, though.

Back in March my body lay mangled in a ditch alongside a Wisconsin roadway. A driver had wanted to share my highway lane while I was still in it. She was turning left, coming out of a side road, intent on beating traffic and not seeing the Harley with its headlight and two cruising lights ablaze almost on top of her. She bad. Me broken.

Now as Minnesota dug out from an all-time record December snowfall, including a near record snow storm that dropped 20-inches in my driveway, there was a first ride to plan between Christmas and New Year’s. There would be four of us and four absolutely top of the game 2011 snowmobiles — a Polaris Rush 800 in decorator red, white and blue; an Arctic Cat 800 stretch track; and two new Yamahas, including an Apex with power steering and EXUP. The other looked like something current but with pieces of some things we might see sooner rather than later — and that’s all we’ll say about it. 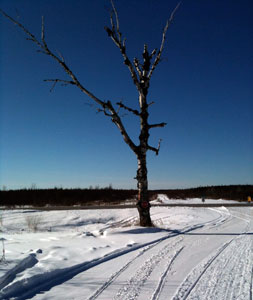 Landmarks like this lone tree become recognizable friends when you ride a favorite trail time and again.

Aside from riding with good friends, some of whom had ridden together back in the time when we owned and published a print snowmobile magazine, this day would matter to me more than any other first ride — ever! In that crash more than nine months earlier, my right leg suffered serious trauma. Had it been up to the emergency room doctor that day, riding would have been tougher for me as a one-legged snowmobiler. But thanks to some determined surgeons, my right leg remains intact, although there’s a supportive long pin from the hip to the knee and my right foot and ankle have more metal than bone now. But we’re mobile, though slow and gimpy. Prior to the first ride, we didn’t know how riding would be affected. We had been riding our snow plow-equipped ATV to push back record snowfall, so we suspected we could sit on a sled. The ride would tell us just how well.

The day came and the two of us from St. Paul, MN, headed two hours north up to the big lake, Milles Lacs, where we would meet the two others in our party. They were as unsure about the day as we were. Would we get in a full day? Or, would they have to escort a lame and slow, broken coot back to the launch site early?

Had this been the old days when sleds sat inches off the snow and suspensions bottomed as soon as you straddled the saddle, we would have made 500 yards, at best! But this isn’t the good old days. Today’s sleds are superior to those old relics in all ways. They have more power. They have real suspensions and handling capabilities. They are sophisticated. 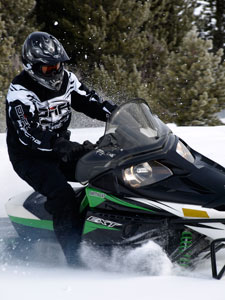 Arctic Cat’s EXT with its stretch track makes off trail travel easy for all rider levels.

Before you send off a text or a tweet chastising me about those remarks, I feel I’ve earned the right to comment on what was once the good old days. My seat, knees and lower back have ample firsthand experience with everything from the early Ski-Doo Olympiques, Alouette Super Brutes, Coleman Skiroules, John Deere Liquifires, Rupps, Sno*Jets, Columbias, Moto-Skis, ad infinitum to the current 2011 Yamaha Apex and turbocharged Arctic Cat touring sleds. Today’s sleds are superior.

We agree that today’s snowmobiles are expensive. What isn’t? But the sampling of sleds we rode for that first ride showcased all that is right with our sport. And where the expensiveness lies. Back in the day, if you could lift the hood on a vintage sled — the 1960s Ski-Doo required unscrewing some nuts to remove its cowling — it would reveal little more than a fan-cooled motor, a drive pulley and possibly a mechanical brake. You could reach everything to fix it. Of course, back in the day, you were fixing things a lot. The Tillotson carburetor might very well vapor lock. Or the fuel filter might get dirty and cause problems. The sparkplug was usually easy to access, but it needed to be as they frequently fouled. Changing a drive belt was simple, too. They shredded easily before Aramid fibers were introduced into belt construction.

To get the level of sophistication we have today comes with a price. Sleds are quieter. Thank government insisted upon standards in the 1970s for that. With sealed hoods came the need for new ways to cool sleds, enter quieter and more powerful but more costly to produce liquid-cooled engines. With the call for more efficient and greener running, more eco-friendly sleds comes still more expense as engine makers add new direct injection systems and quieter, hotter running exhausts. It all adds cost and weight to the modern sled — and complexity and the need to keep consumers — us — from tinkering under the hood. We are seeing the end of fan-cooled and dirty fuel-sucking, high emission producing liquid-cooled motors. Their replacements are more sophisticated and cost more in development time and real dollars. 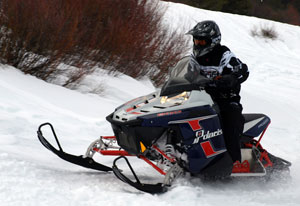 This “retro” Polaris Rush with its Pro Ride suspension and tall saddle height helped make our 100-mile day easy on our traumatized leg as we worked our way back into snowmobiling shape.

So, there we were with four very sophisticated and very smooth running sleds. All were liquid-cooled. Two were two-strokes. Two were four-strokes. All were powerful. That part was easy to handle for this broken down snowmobiler. It was easy to power on and off. What was potentially a problem was physically riding them, pushing off the runningboard to position the body for a corner or a bump. We were slow, slower than we had been. The upper thigh of the right leg had lost 40 percent of its muscle mass and meat when the leg bone broke and ripped an eight-inch hole in the skin and through the Levis that day. The ability to transfer weight from side to side was definitely slowed, but something we could work with over time. That was something we needed to know and now it was less of a concern!

Lying about during nine months of recuperation, physical therapy and overall rehabilitation took its toll on body tone. Interestingly, while we were concerned about how the leg would react to riding again, we discovered aches and pains every other place. We work the leg daily with physical therapy exercises, so it responds. The rest of us proved out of sorts. 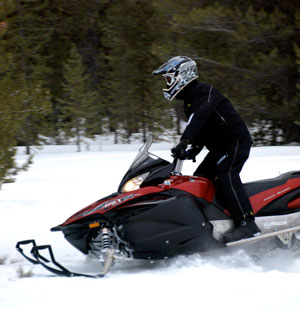 Yamaha’s Apex has ample power and electric power steering as assets when riding in rough terrain.

Thankfully we have new sleds to ride. Regardless of the brand, they all proved friendly. We worked sections of tight trails with quick corners, including many off camber ones that would be a challenge for two good legs. The long corridor runs gave us ample time to recharge and relax. The section of yet-to-be-groomed trail proved a bit tough as we had difficulty reacting to side dips and loose handling. But, overall, the ride was a success. We made the 100-miler plus in about four hours, not including lunch at a local snowmobile pit stop off the trail and plenty of story-telling on the trail.

The first ride started with sincere concerns as to whether we could still keep up. The conclusion seems to be that we can, but personally we feel that there is work to do yet. The leg will never be what it was. We have to arrive at a new normal and work with that. The accident challenged us to heal and to learn new ways to do some old things, one of which is getting back on the sled. And in the spring, getting back on two wheels. When life throws you a curve, you have to learn how to negotiate it and find the best line through it. We’re working on it thanks to friends and today’s modern snowmobiles.