Polaris Gets On The Gas In A Down Economy

What started as a small town business is now an international force.

Once upon a time Polaris lived quietly in northernmost Minnesota. Its Roseau factory first produced a snow-traveling sled back in the mid-1950s that sought to replace flesh and blood dogs with a new breed of “iron dogs” that could run relentlessly for hours across western Canada, the Dakota plains and Minnesota’s tundra-like snowscapes. Eventually those rear-engined commercial-grade machines would step into modern times and provide recreation to thousands across the international snowbelt. Those recreational models gained immensely from the company’s competitive spirit as legendary racers with names like Eastman, Monsrud, Bernat, Omdahl, Rugland and Mercer brought attention to that small factory that sits closer to Winnipeg, Manitoba than Minneapolis.

In those days Polaris earned a reputation as the performance snowmobile. It was the Polaris brand that won more 500-mile cross-country races between Winnipeg and St. Paul than all other brands combined. The Polaris factory drew workers from a 1960’s population base of less than 4,000 residents. Its nearest competitor, Arctic Cat, outsold Polaris by a huge margin in sled sales. In the earliest days, Polaris built “iron dogs” to replace canines. It was a start.

When Arctic Cat went down in the early 1980s, Polaris motored on, but a few years later found itself faced with turmoil as its parent company, Textron, a multi-national conglomerate wanted out of the sled business. In economic times similar to now, Textron sold its snowmobile business to a group of Polaris executives, who used the Polaris reputation to salvage the brand and ultimately take Polaris snowmobiles to a decade-long run as the Number One selling brand in the snowmobile industry. 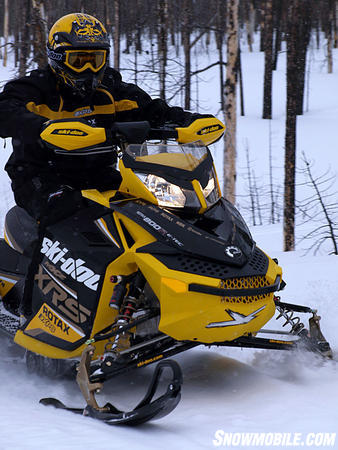 A major innovation in sleds came with Ski-Doo’s REV and its rider-forward design.
Eventually the brand gave way to Ski-Doo as the sales leader in sleds, when the Canadian-based manufacturer scored big with its innovative REV concept of ride-forward sled design. Don’t feel sorry for Polaris, however.

Polaris had taken its eye off sled development as the company found new success developing innovative products like its four-wheeled ATV with unique-at-the-time snowmobile-style CVT drivetrain, full protective foot boards, and long travel McPherson strut front suspension. The success of ATVs spurred development of the Ranger side-by-side four-wheeler, which in turn led to the sit-in RZR hot rod. Polaris may have lost some momentum in sleds, but it gained leadership in ATVs and side-by-sides.

As we entered the current economic downturn we held so little hope for the powersports business — especially as the snowmobile side of it suffered some lean snow seasons — that we sold all our Arctic Cat and Polaris stock. We’ve lost no sleep over the ACAT stock, but the Polaris stock rebound since we sold off the shares has us scratching our head.

We have seen Polaris go from being a small independent firm to conglomerate-owned by Textron to today. When we look at modern day Polaris we wonder how this company has fared so well.

When Textron owned the company, the Roseau facility built sleds, some Textron-brand golf carts, and dabbled in other products. But when sled sales dipped badly in the 1980s with little promise of rebounding, it was enough to convince Textron to unload the company — along with some other “loser” divisions at the time. Indeed, Bombardier was rumored to be a buyer, and might have done so had the US Department of Justice not intervened. Textron got fed up and virtually handed off the company to some Polaris executives, who mortgaged their homes for a shot at owning a snowmobile company. 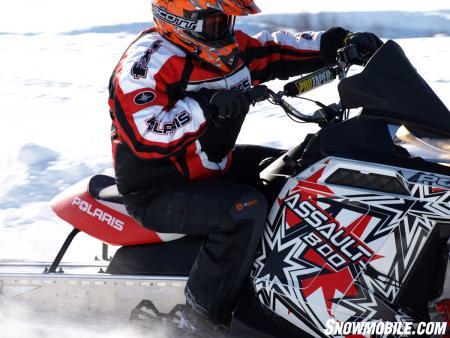 Polaris builds the Assault to grab a share of the backcountry snowmobile niche.

It’s not like it was all smooth sailing with Polaris back then, Initially the company looked to its leafsprung Cutlass-type snowmobile as the corporate savior, but consumer preferences ran to the more expensive to produce Indy models with the trailing arm front suspension. Wisely Polaris listened to its consumers and rode the Indy to many years of financial success.

Indeed, Polaris often looked like the farmers they served in Roseau. After all, what dimwit company would build an all-terrain vehicle with four-wheels, a small displacement two-stroke snowmobile motor powering the wheels via a snowmobile transmission? Everyone knew that market leader Honda had the only right idea using a manual gearbox, small four-stroke engine and only three wheels! Tell that to Honda right now. Polaris ATVs did well, proving there was a big market for easy to ride off-road vehicles.

Being like the farmers that they served worked for Polaris when the company’s engineers designed the Ranger side-by-side utility vehicle. It worked in the marketplace because Polaris engineers and marketers, many of them actual hunters, farmers and outdoorsmen lived the lifestyle their products served. They didn’t need fancy marketing surveys. They needed a vehicle that could haul a few bales of hay to the horse pasture or drag a moose out of the woods. 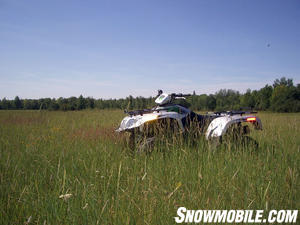 To capture performance riders, Arctic Cat came up with its one-liter Thundercat.
As Polaris became more sophisticated, the company learned to market products to new areas, such as the military and defense industries. The US Army uses specially modified Rangers and ATVs. You might find Polaris snowmobiles serving with the military’s various “mountain” outfits. And who would have thought that Polaris would sell electric vehicles?

And, those motorcycles? When we watched Al Unser Jr. rumble that very first Victory motorcycle into Mall of America’s Planet Hollywood, who would have guessed Polaris would still have a motorcycle division, much less purchase the iconic Indian brand?

Now Polaris doesn’t surprise us that much anymore. We’ve seen the company enjoy a resurgence in the snowmobile market, which backs up what management has been telling us right along. Polaris is “on the gas.”

Indeed, all Polaris products surged to a 31 percent revenue increase in its past end of year quarter. Better yet, fully two-thirds of the company’s sales have been driven by new products. Check out the new products sections of Polaris competitors. You might expect to see a similar rush of innovation, but it isn’t there. That leads us to a shocking revelation that cannot be overlooked. Polaris takes carefully calculated risks and makes investments in new products, most of which seem to be paying dividends. 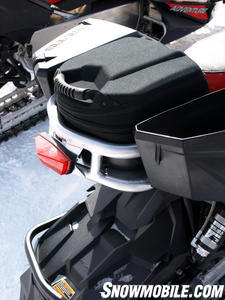 Polaris brings “Lock & Ride,” an innovative cargo system to snowmobiling for 2012.
Polaris moved from strictly workman-like side-by-sides with a limited capability to play to a series of low-slung two-seaters that have go-kart reflexes and desert racer handling, culminating in the RZR 900 power toy.

That shouldn’t have been so unexpected and we would have anticipated competitors reacting quickly to gain a share of this fast growing market segment. But, instead, we read about how one of Polaris’ close competitors simply admitted, “We were caught a little off-guard by how fast the side-by-side market grew.” Hello!

We see it in snowmobiles. Polaris stepped up with the Pro-Ride and its external shock design to provide its sleds with an innovative suspension. In its third season, the stretched out Pro-Ride of the Switchback is exceptional.

To date only Ski-Doo has responded. And that’s with a limited build alternative that features runningboard mounted external adjusters. Still, when we look at what Polaris has done in recent years, we see a company looking to create advantages for itself and a desire to expand market share in current business niches while working to establish and grow new markets.

This little company that once upon a time grew via word of mouth and raced to success, continues its desire to live happily ever after. Products like the new RMK, the re-designed Switchback, the RZR 900 and niche vehicles like the Breeze that is sold into retirement communities are all a continuation of an international company maintaining its little company roots.