How much do you know about snowmobiling?

How much do you know about snowmobiling? Here’s a few questions designed to make good sled chat next time you and your snowmobiling friends get together.

Can you get all 20 questions correct? Let’s find out — answers appear at the bottom of this quiz, but no peeking!

1. Arctic Cat founder Edgar Hetteen also founded what other snowmobile brand?      a. Scorpion b. Brutanza c. Fox d. Polaris e. None of the above

2. The week of February 12-22, 2010 marks the second annual: a. Snowmobile Safety Awareness Week b. 50th anniversary of the first Ski-Doo snowmobile c. Take A Friend Snowmobiling Week d. Transcontinental snowmobile rally e. None of the above 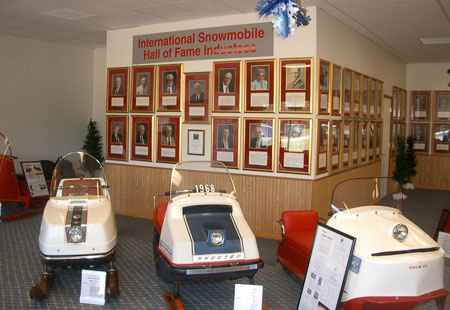 Snowmobile history is preserved at places like the World Snowmobile Headquarters in Eagle River, WI.

3. According to the International Snowmobile Manufacturers Association approximately how many registered snowmobiles are there in North America? a. 1.65 million b. 2.4 million c. 250,000 d. 3 million e. None of the above

4. In the early 1970s there was an initiative to create a network of organized snowmobile trails that was known as? a. SnoPlan b. Quebec Trails c. The Corridor Trail Initiative d. North American Snowmobile Trail Network e. None of the above

In the early days, sled makers literally bought “off the shelf” engines such as early 4-stroke Kohlers to power their designs.

7. Which engine supplier has not powered a production Arctic Cat snowmobile? a. Suzuki b. Kawasaki c. Honda d. Kohler e. None of the above

8. Which snowmobile brand promoted its 1968 models as having “rugged staying power” for completing a 3,800-mile journey from Minnesota to Anchorage, Alaska?      a. Arctic Cat b. Polaris c. Scorpion d. Brutanza e. Viking

10. Which of the following was not a member of the 1968 Plaisted Expedition to the North Pole? a. Ralph Plaisted b. Jean-Luc Bombardier c. Walt Pederson d. Jerry Pitzl e. Laurent Beaudoin 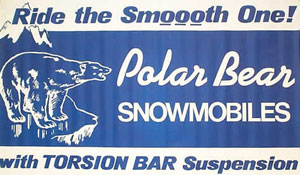 11. Which of the following snowmobile brands was headquartered in Connecticut? a. Snow Birdie b. Polar Bear c. Fox Trac d. Brutanza e. Sno-Jet 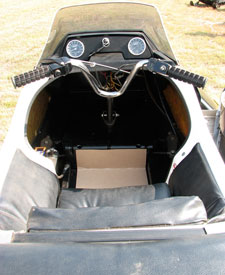 The Raider sit-in snowmobile would be re-invented as the Manta and then its last iteration as the 4-stroke engined Trail Roamer.

16. Before evolving into the Manta and later the Trail Roamer, what was one of the first production “sit-in” dual track snowmobiles? a. Ski-Doo Elite b. Kawasaki Drifter c. AMF Ski-Daddler d. Arctic Cat Puma e. Leisure Vehicles Raider

17. There were two snowmobile models in the 1970s to carry the name Cyclone, one was offered by John Deere and the other by? a. Ski-Doo b. Sno-Jet c. Massey-Ferguson d. Yamaha e. Arctic Cat 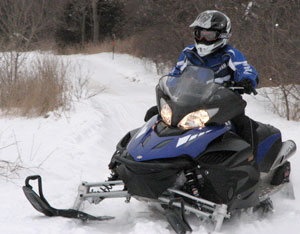 Yamaha may have been the last full-scale snowmobile manufacturer to join the industry, but it has been innovative with performance 4-strokes, underseat exhaust and power steering.

20. Which snowmobile manufacturer was the most recent to join the snowmobile industry? a. Arctic Cat b. Polaris c. Ski-Doo d. Scorpion e. Yamaha

How well do you know the sport? Here are the answers. Give yourself 5 points for each correct answer. 100 percent makes you a serious industry insider.

ANSWERS: 1. d — Along with brother Allen and friend David Johnson, Edgar Hetteen co-founded Polaris before moving from Roseau, MN to Thief River, MN to create the Arctic Cat brand. 2. c — Invite a friend or non-snowmobiling family member to join you for a fun snowmobile cruise. 3. b — There are 1.65 snowmobiles registered in the United States with another 765,000 registered in Canada. 4. a — SnoPlan was a trail concept pioneered by Bombardier’s Laurent Beaudoin and the Province of Quebec in the early 1970s. 5. c — Currently there are more than 225,000 miles of groomed and marked snowmobile trails maintained by North American snowmobile clubs and associations. 6. b — Each season the average snowmobiler spends about $4,000 on snowmobile-related recreation, including putting on about 1,400 miles annually. 7. c — In its early days Arctic Cat used some Kohler brand engines on some specialty models and in the 1970s switched from Kawasaki power to its current reliance on Suzuki-built engines. 8. c — Scorpion hung an advertising campaign around a 3,800-mile promotional trip that saw three Scorpions run from Crosby, MN to Anchorage. 9. a — Worldwide there are 3,000 snowmobile clubs working to promote the sport through charity fund-raising, trail grooming and promoting the sport as a family activity. 10.  e — Laurent Beaudoin, who has overseen the growth of Bombardier from a snowmobile company to a worldwide transportation giant, did not make the North Pole trip, leaving that to his in-law, Jean-Luc Bombardier. 11. b — Named for owner Ray Bonnell,  Raybon Manufacturing was based in Wallingford, CT and produced about 500 Polar Bear snowmobiles from 1971 to 1978. 12. e — To cure overheating of the brakes on its racing sleds, Polaris developed a liquid-cooled brake design that became a standard production element on some of its high-performance Indy models. 13. d — Arctic Cat pioneered a torsion-sprung slide suspension in the 1960s and used it on its 1968 Winnipeg-to-St. Paul race winner. 14. c — Over the years, Polaris has won more “Winnipeg” events than all other sled makers combined. 15. c — Using Yamaha snowmobiles, Bender racked up four consecutive wins at the Eagle River World Championship Derby. 16. e — Bob Bracey at Leisure Industries and later 3R Industries promoted the sit-in snowmobile concept, first as Raider then as Manta and lastly as Trail Roamer. 17. c — Scorpion actually manufactured the Massey-Ferguson brand when it offered the Cyclone, which itself was a version of the Scorpion-branded Brut performance sled. 18. a — Although Italian-engined Harley-Davidson snowmobiles would have a short run in the snowmobile business, its sleds have become prized by collectors. 19. d — Snowmobiling has a $22 billion impact in the United States with another $6 billion in Canada. 20. e — Yamaha came into the industry in the late 1960s with the SL351 to join established pioneers Polaris, Ski-Doo and Arctic Cat.