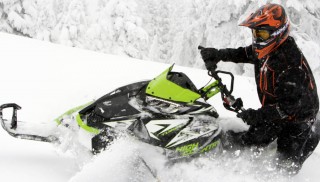 Oh, that screaming demon. The 2018 Arctic Cat XF 9000 High Country Limited is the quintessential high-speed freak machine. It is also the baddest bootlegging and moonshine running outlaw crossover that man has cranked out from a local distillery. It’s all bad and it’s all good.

We have laid out much on the 9000 line from Arctic Cat, from its mountain mauling King Cat to its trail-tearing Thundercat. The three-cylinder turbocharged four-stroke motor from Yamaha, partially co-developed with Arctic Cat, is the 200-plus horsepower missile the Air Force wished they had.

With the XF 9000 High Country, Arctic Cat gives crossover lovers a snowmobile that is King Cat and Thundercat inspired. One could say, the High Country is the cross-bred child from those two.

The question to ask when researching out a crossover snowmobile is what is the ultimate end? Speed and comfort on trails? Maneuvering in deep-powder in the meadows and on rolling hills? Or, no-hassle operation from a four-stroke snowmobile? Regardless, the 2018 Arctic Cat XF 9000 High Country Limited is a crossover snowmobile that accomplishes all this and more. And that “more,” is: no power loss from nose bleed heights. 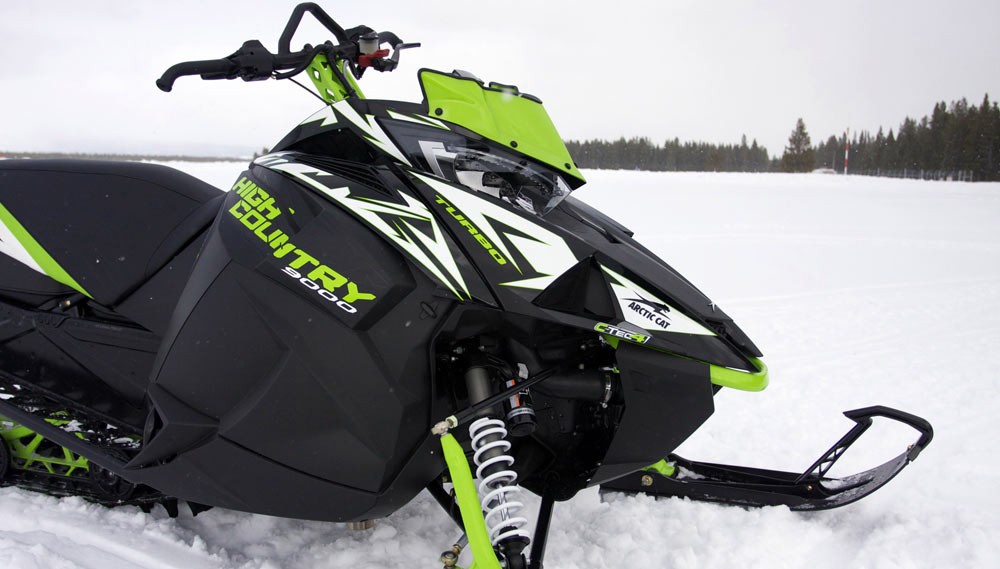 The XF 9000 High Country Limited comes fully equipped with mountain amenities such as J-hooks at each bar end and a center pull strap.

Arctic Cat is a company that is taking on a rebirth. For the past several years, Arctic Cat has slowly been clawing its way back to high visibility and customer awareness. We often hear all Arctic Cat has to offer is Tucker Hibbert race replica snowmobiles. In some part, that may true, but as we’ve seen this past year, Arctic Cat is working hard to deliver its yesteryear reputation. Strength, brand recognition and snowmobiles that are built with what you need and want, not snowmobiles Arctic Cat feels you want; Cat is not trying to manipulate the demand curve.

The crossover segment is an upward trajectory segment. Michigan’s Upper Peninsula riders, for example, are opting for long track snowmobiles with two-inch or taller lugs. Many low elevation dealers in the Midwest and East are ordering sea-level calibrated mountain snowmobiles to fill a demand that younger riders want – superb deep powder finesse. The sea-level calibrated mountain snowmobile and companion crossover snowmobile are challenging the 130-plus length snowmobile as the all-purpose snowmobile where the snow is deep and trail grooming is infrequent.

Many vacationers leave their flatland home states to travel to Alpine, Wyo., West Yellowstone, Mont. and Heber City, Utah, to name a few locations, to experience Rocky Mountain trails and backcountry. The crossover snowmobile is the proper choice for Rocky Mountain riding as well as home riding in Vermont. Why choose the 2018 Arctic Cat XF 9000 High Country Limited for this? Because many riders are demanding the smooth ride and float a long track offers. 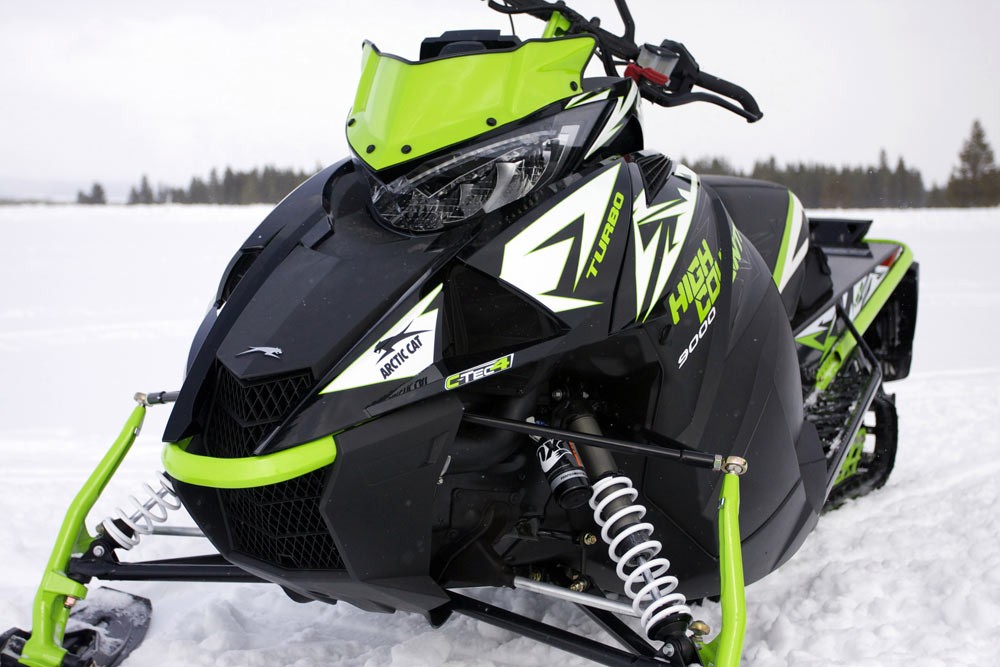 The C-Tec 4 motor has a large up front radiator to keep the big turbo motor cool. When pushing deep powder, be mindful to brush off the built-on powder to prevent moments of overheating. Note the M9000 inspired runningboards.

The 2018 XF 9000 High Country is muscular enough to keep other challengers in the dugout. Furthermore, the reliability from the Yamaha motor, with Arctic Cat input into the design, makes the XF 9000 High Country a crossover snowmobile that will deliver years of powerful play.

To the basics. The XF 9000 High Country only comes in the Limited package. If you are hoping for an XF Sno Pro version, that’s not going to happen. However, the High Country Limited does come in an 8000, if you are opting for a two-stroke version.

The 2018 Arctic Cat XF 9000 High Country Limited comes in two track lengths, 141 and 153. This is where it gets tricky. Both track lengths can be assembled with a 2.25-inch PowerClaw track; not a bad powder track for whipping the boonies. But, for the 153 only, customers can choose the 1.75-inch Backcountry X track. So, for you shorter 141 riders, your XF 9000 High County Limited will come only with the 2.25-inch PowerClaw and nothing else. Unless of course you want to work a swap-out with your dealer.

Now, we here in journalism land, can’t quite figure that one out, the 153 having two track choices, whereas the 141 having one. At Arctic Cat’s Sneak Peek in February 2017, Arctic Cat told us, when we posed our puzzlement in a question, that its flatland dealers requested the shorter lug track be a second track choice for the 153 as footprint – longer track – makes up for flotation, while still maintaining a long track snowmobile that is nimble through the S-curves – it can drift. 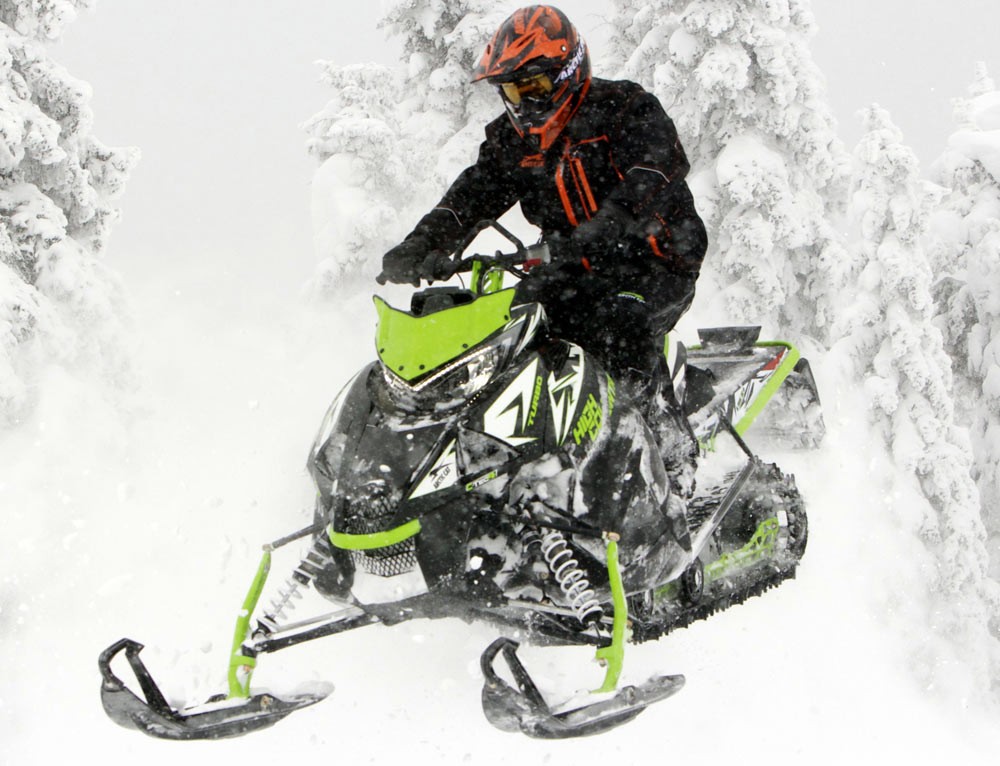 Yes, the XF 9000 High Country has wings. With some sassy throttle control, the big turbo crossover can fly over some whoops in Tucker Hibbert style. The Fox QS3 shocks are perfect such landings.

Now we admit, this is a bit foreign to us, as we want both float and bite. But for you to know, the 153 XF 9000 High Country Limited is a crossover with two personalities, crossover with powder appeal (2.25 PowerClaw) and crossover with more trail appeal (1.75 Backcountry X). We thought the 141 would have been the dealer and customer choice for the shorter lug track, yet we are not invited to sit on the dealer council meetings to give our boisterous opinions.

The 2018 Arctic Cat XF 9000 High Country Limited comes equipped with a TEAM Rapid Response II drive clutch and a TEAM Rapid Reaction BOSS driven clutch. These make up the Arctic Drive System (ADS). Gearing for the two chassis lengths is 22/48; plenty tall to let 200 horsepower run free, yet just low enough to keep the monster motor tamed to run up gentle sloping powder chutes. Clutch calibration is set for 0 to 5000 feet. Above that, then lighter springs and weights need be installed. When trailering your XF 9000 High Country Limited from Minnesota to Alpine, Wyo., have your dealer prep this crossover for 5,000 feet to 10,000 feet.

For trail, whoop and powder control, the XF 9000 is honed and polished with Cat’s front Arctic Mountain Suspension (AMS) with sway bar. It relies on Cat’s Pro Climb-7 Mountain Ski and Fox 1.5 Zero (Quick Switch 3) QS3 shocks to take mogul bounce. Ski stance is an adjustable 38.5 to 42.5 inches. The wide position is the best choice for fast attack trail. For powder, cinch it in to 38.5 inches. For us, we’d have the dealer take off the sway bar and set the Fox shocks to 2. We are powder boys and we like a Cat on its edge. We believe snowmobiles should be driven with one ski up at all times, like a dog watering a fence post. But for ditch bangers and trail burners, the XF 9000 High Country Limited set to 42.5 inches is just right for Michigan’s Upper Peninsula trails and meadows. 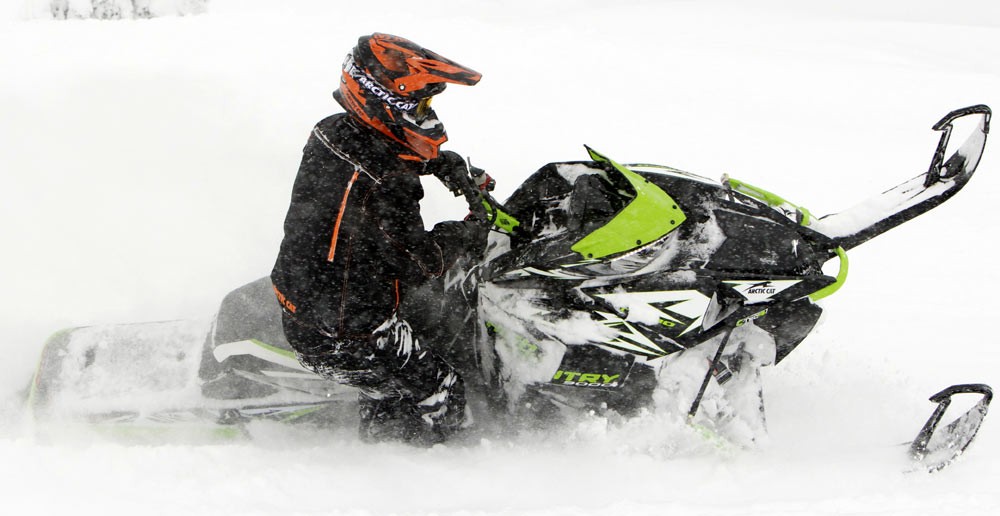 If you like being up on edge, the XF 9000 High Country Limited can be edgy. Best to pull in its ski-stance to its narrowest position and set the shocks to its softest setting.

At the south end, the rear suspension is the Float-Action with a Fox 1.5 Zero QS3 shock at the front and rear. Like the shocks on the AMS, these are premium shocks with three settings; soft, medium and hard. We like position 2 and have locked in position 3 for kicks and grins when the whoops became school bus sized.

Now that you have the tech speak and our opinions, we must state when we’ve unleashed the XF 9000 High Country Limited, trees that stood at attention near a trail side, looked like a picket fence as speed inched up, and as we hit “Oh wow,” the trees became a gray blur. This crossover is not for grandpa and grandma, unless that grandpa is this author.

Arctic Cat does not promote the 2018 Arctic Cat XF 9000 High Country Limited as an all-out deep powder assault weapon, but a trail weapon with killer instincts for one foot-deep powder; and perhaps some hot speed runs up over Two Top if near West Yellowstone, Mont. The heavy front end will be somewhat wieldy to manage if trying to chase a King Cat or M8000, especially if the High Country is set at its widest stance.

Though the XF 9000 High Country Limited has mountain handlebars and a center pull mountain strap, one must practice with these often and much before taking on the Rocky Mountains. The motor’s power and the snowmobile’s overall weight can challenge the inexperienced. For us veterans, it has even snookered us once or twice.

In summation, we really like the 2018 Arctic Cat XF 9000 High Country Limited, especially the 153 with the 2.25-inch PowerClaw. Now, the 141 is glued and nailed to the trail. It is so much fun, there ought to be a five-step recovery program to pull the addiction down a notch. The 9000’s boosted 998cc electronic fuel injected four-stroke three-cylinder motor is the epitome of a high horsepower super sleuth; it is deceivingly quiet. Yes, it is all bad and that is all good.