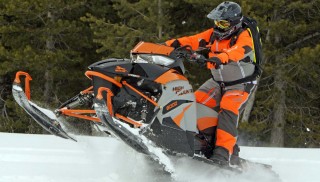 A little ripper that rips

If you knew everything, how smart would you be? For us, we thought we knew it all until we learned we didn’t. For example, we thought – we believed – the 2018 Arctic Cat XF6000 High Country was just a wannabe 800. Well, it is a wannabe and…it is not.

Over a period of a couple fast days, we learned the XF6000 is its own sled. It makes no claims it’s a poor man’s 800 – it is a 600. But, if it did not have baked on its hood “XF6000 High Country” and we gave it to you for some time to chase trees through the land of tight, you’d think the “XF8000” performed fairly well. We would expect you would comment it had a longer and taller PowerClaw track rather than the 141-inch with 2.25-inch lugs. 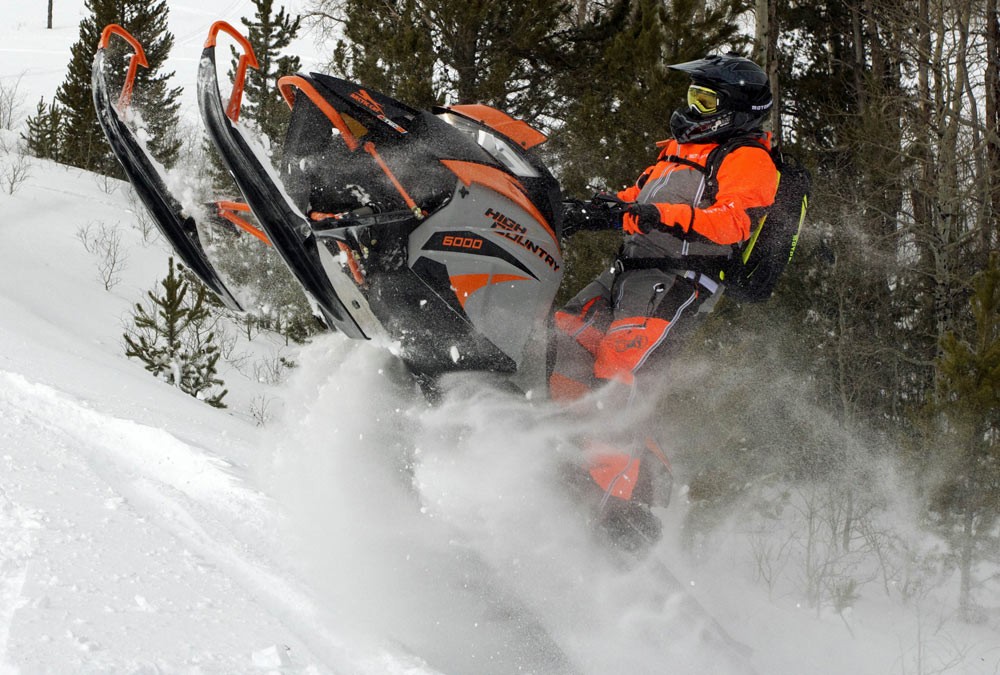 When hitting the ravines in “Boonieville,” the 141 XF6000 High Country will climb fairly well with its 2.25-inch PowerClaw track.

In the area where the Snowmobile.com mountain team lives, Southeast Idaho, crossover snowmobiles are not as plentiful as they are in the Midwest and East. Furthermore, a 600cc. crossover snowmobile, no matter the brand, is a snowmobile Midwesterners and Easterners rent as they tour through Yellowstone National Park in January. Our Rocky Mountain world is much different than flatland world, and we surely recognize that. But this does not mean we do not like crossover snowmobiles, we do.

The crossovers we enjoy are – mostly – mountain snowmobiles with wide front ends with a tad bit shallower track. We mountain guys like to open it up and set the trails on fire. After spending a Saturday banging on mountain slopes and stitching lines across hillsides, we open up our mountain sled and slap into each other on the way down the mountain and to the truck. We race and we do it madly. 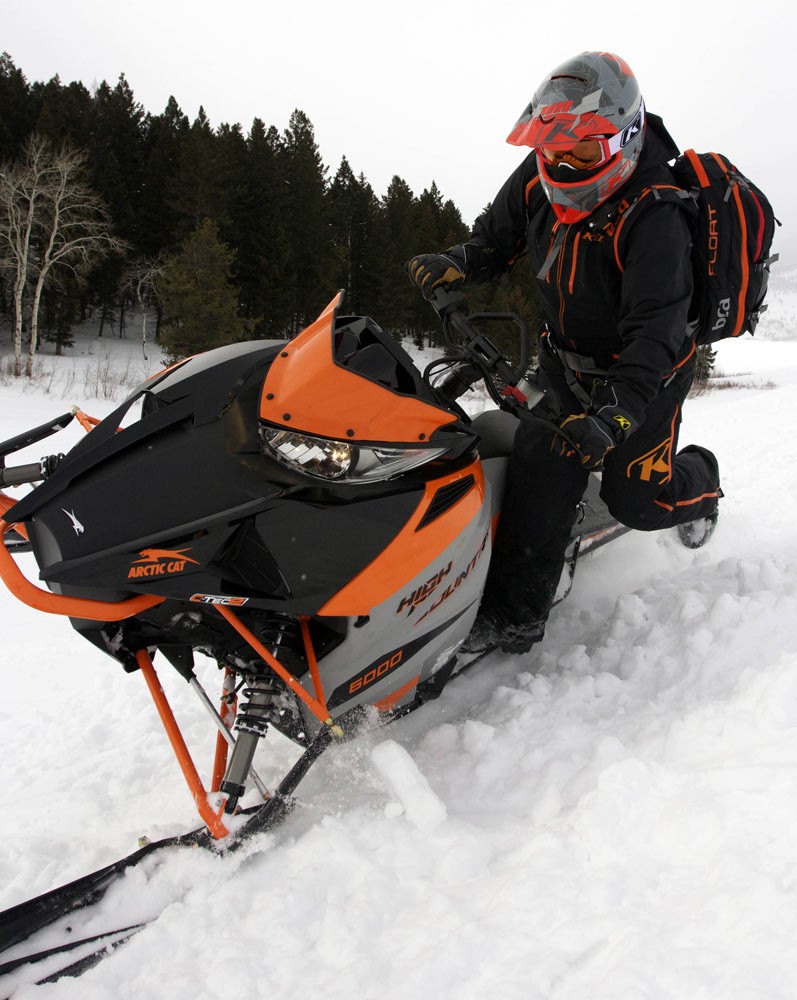 Though it has a swaybar and a wide ski stance, the XF6000 High Country will still slip off and down a sidehill.

So, we have a crossover for you, and it will fulfill your cross-training program. Yes, the 2018 Arctic Cat XF6000 High Country is fit and trim for trail, meadow and rolling hill antics.

Some info you need to know. The XF6000 High Country is a 599cc two-stroke twin with direct electronic fuel injection. This motor, for 2018, is in its sixth year with Arctic Cat, and is proven. This motor served as the foundation for Cat’s new 799cc twin that is in all 8000 series snowmobiles. The 599 C-Tec2 motor is a 125-horsepower category motor and is the same motor powering Cat’s ZR line for cross country and snocross racing.

The XF High Country uses the same Ascender chassis with Next-Gen body panels as the M series. This gives you a chassis that is clean, narrow and nimble for mountain play. Arctic Cat’s High Country snowmobiles, be it the XF6000, and the larger XF8000 and XF9000, are more powder and mountain than trail. The High Country is, we guess, a 65% mountain and 35% trail crossover snowmobile. 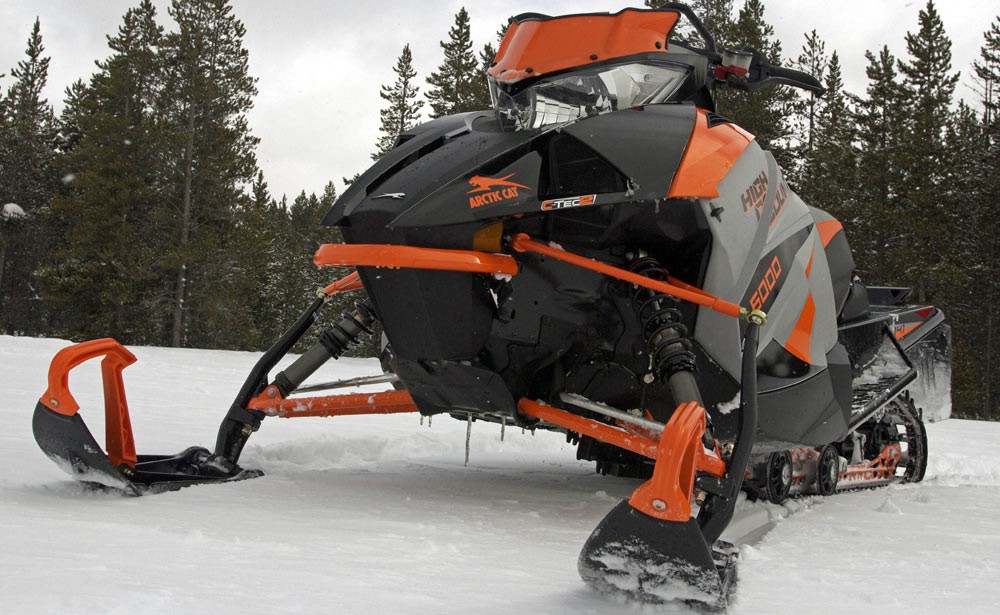 This three-color color combination is one of Arctic Cat’s best designs. For 2018, the XF6000 High Country is a go-fast statement maker.

The 2018 Arctic Cat XF6000 High Country comes loaded with Cat’s Arctic Drive System – ADS – that comprises of a lightweight magnesium chaincase, a Team Rapid Response II drive clutch with auto-adjusting belt tensioning, which, according to Cat, “delivers consistent performance without manual adjustments” and a Team Rapid Reaction Boss driven clutch. From the heavy loads we’ve put on these clutches this past season on a M8000 Limited, a M9000 King Cat, a M8000 Mountain Cat, a M6000 Sno Pro and an early release 2018 M8000 Sno Pro, we confidently state, this ADS is robust enough to handle all you and any crossover driver can shovel onto the XF6000 High Country. The sled’s gearing is 19/50.

Continuing, the front suspension is the Arctic Mountain Suspension with sway bar and Arctic Cat internal floating piston (IFP) 1.5 shocks. Ski stance is an adjustable 38.5 to 42.5 inches and the ski is the ProClimb-7. Front suspension travel is nine inches.

The rear suspension is the Arctic Float-Action with IFP 1.5 shocks at the front and rear. Rear suspension travel is 14.5 inches. The 141-inch long PowerClaw track has 2.25-inch lugs – sufficient for crossover work. But, as well as this motor performs, and being we had an M6000 for all 2017, which had a 2.5-inch PowerClaw track, we recommend Cat offer the XF6000 High Country in a Spring-buy Sno Pro or Limited version with the taller 2.6 PowerClaw track. With that offer an upgraded shock package such as Fox Float. 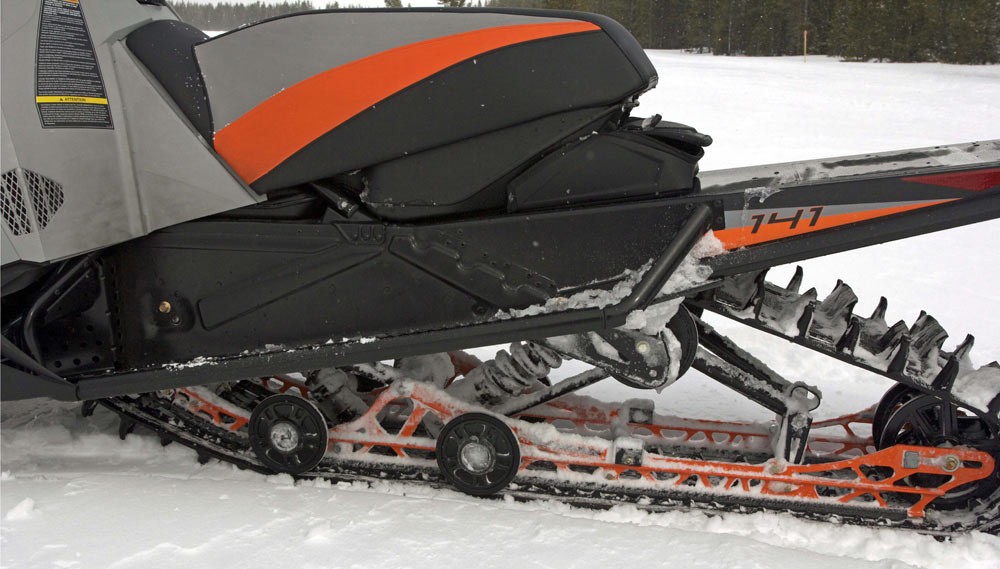 Though its lugs are only 2.25 inches tall, the PowerClaw track shovels much snow to move the 6000 along.

Now, when Arctic Cat reads this story, it is probably saying, “Snowmobile.com, there is no demand for a high-end 600.” True, perhaps. But, maybe, just maybe, adding more function and appeal, sales of the XF6000, especially for the Spring-buy push, may ante up sales.

This past season, after having an M6000 for 2017, and having for two years, a Polaris 600 RMK Pro 155, we are going to devote some print electrons to the topic. Basically, we feel the 600 class is somewhat forgotten by the OEMs, when it should not be.

Back to the 2018 XF6000 High Country. It is built with telescoping handlebars, of which the bars have a center pull mountain strap and J-hooks. The telescopic handlebar first appeared on Cat’s mountain line, and was eventually pulled by Cat as a weight savings measure. But the “tele” bars were mostly cut as current and aggressive riding styles demand a low and fixed post. Mountain riding has evolved. For crossover riders, the telescoping handlebar expands the XF High Country’s versatility. 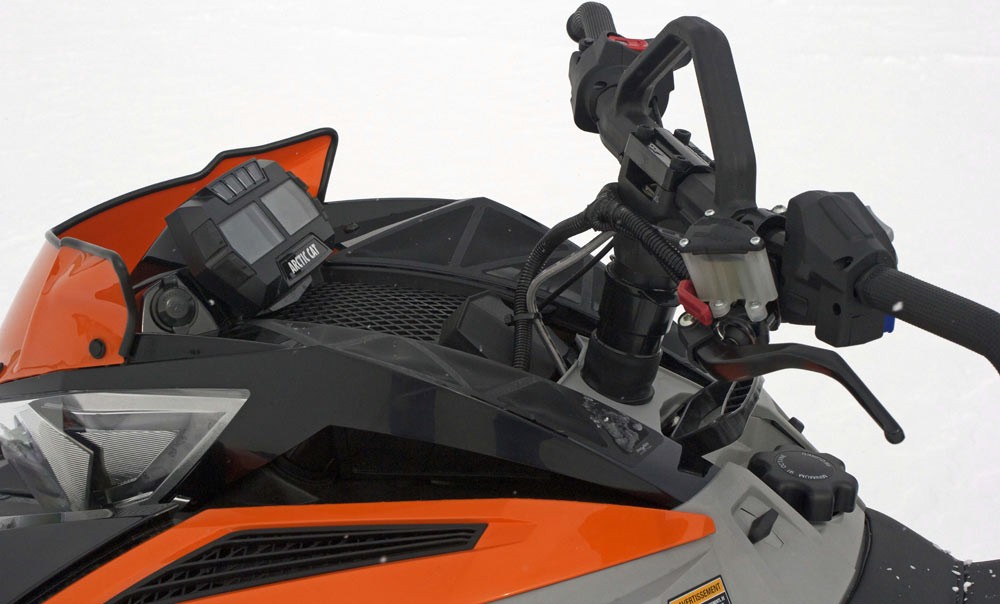 As like the M series, the XF has a vertical steering post, J-hooks and center-pull strap. The High Country, though, comes with telescoping handlebars.

It has the standard M-series seat with rear storage, electronic reverse and electric start. For us, we are not a fan of electric start on a small horsepower, mostly mountain, crossover snowmobile. The C-Tec2 600 motor starts just fine without it, and the added 20 pounds from a battery, starter motor and wiring, is not needed, especially when the 6000 may operate at high altitudes. This is where we recommend a Spring-buy 6000 High Country where the purchaser can opt out of electric start. We like light and skinny deep-powder crossover snowmobiles.

The 2018 Arctic Cat XF6000 High Country runs down the trails nice and clean. The motor, with properly configured clutches for altitude, make this crossover a fast little scoot. In the powder, the swaybar-equipped front end keeps the nose planted, and at times, too planted. If you want to offset the keep-it-on-the-ground assuredness the swaybar invokes, we advise riders to set the front-end ski stance to its narrowest. Furthermore, when making some sidehill maneuvers, keeping the handlebar at its lowest- to mid-position, will ensure your stance over the track drivers is optimum. However, if you are six-feet tall and more, raising the bar’s height helps deliver balance and control.

On the trail, the vertical steering post is not best positioned for hard and fast cornering, like laydown or horizontal posts are; the XF6000 High Country is built, mostly, for standup riding like its “M” siblings. The XF6000 Cross Country Limited has a laydown steering post. The XF6000 Cross Country model is opposite in crossover purpose to the High Country where it is 65% trail and 35% powder, in our estimation.

What crossover purchasers ought to do is take a personal inventory asking themselves, “what is my riding purpose?” If it is to bust powder and track up ungroomed trails in Michigan’s U.P. on a 600 two-stroke, then the XF6000 High Country is superb. Additionally, if you are a Minnesota or North Dakota resident who winter vacations in the Rocky Mountains – western Montana and western Wyoming – but also rides your home state’s trails, then the XF6000 High Country is, again, a perfect crossover. 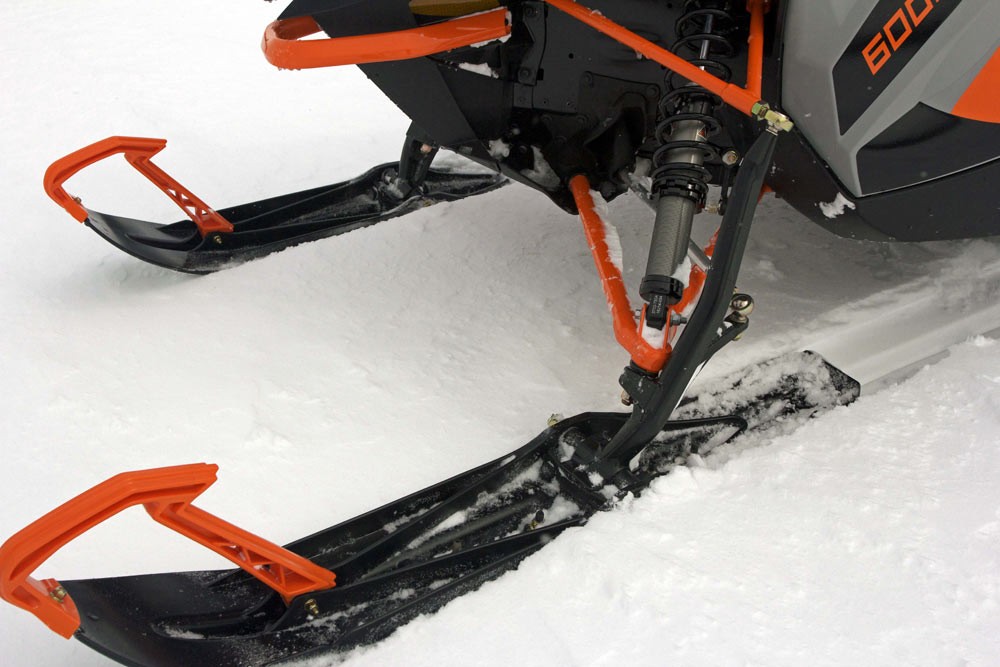 ProClimb-7 skis and Cat’s Mountain Suspension, the XF High Country 6000 is built for powder. However, its swaybar keeps it fairly planted for trail riding.

For westerners who have aged and have minimized time on the mountain, then the XF6000 High Country is well suited for drives to the cabin, around Island Park and West Yellowstone, with a few hits in the backcountry near Lion’s Head. But understand its mechanical limitations due to a small motor and a mid-length track with less-than 2.5-inch lugs limits deep powder play.

Let us wrap it up here. Is the XF6000 High Country fun? Oh ya. Is it a fairly nimble and agile powder player? You bet. Is it hard to handle? No, especially when it is set to a narrow ski stance. Is it comfortable on the trail? Yes, when its handlebars are adjusted for cruising. Is it going to keep up with an M6000 in the powder? Yes and no. If the High Country rider is the better of the two, then the XF will mostly keep with the M6000 rider. But, if the rider on the M is wired for the mountains, the XF rider will need be acutely aware the 141 has limitations with its 2.25-inch tall paddles.

Ask us, would we own one? Yes. This is the perfect snowmobile for the beginner mountain rider who likes to trail ride as well. This is well-suited for the wife or girlfriend whose male partner is an all-out mountain rider, or who has an 800-powered crossover. The XF6000 High Country is proper for the rider who has retired from a 30-year career and is looking to settle in as a mountain rider without needing to go steep-and-deep into the boonies to feel alive. Also, it is for the 16-year old rider who is passionate about powder, first, and trail second; for the alpha male teenager, the XF6000 High Country will not bruise his ego because it is not an 800.

As written in our opening paragraph, if an unsuspecting rider did not know the 2018 Arctic Cat XF6000 High Country was a 6000-series Arctic Cat, they may believe at first it’s an 800. The XF6000 is not an apologetic snowmobile. It is comfortable in its metal, rubber and plastic as a 600 and it will not shy away from a brawl. The motor is strong, while being quiet. The two clutches harness the motor’s power with efficiency and transfers power down to the track. It is a serious crossover snowmobile, built for some powder play for the young, the retired and for anyone looking for simple crossover riding in the powder on the trails.