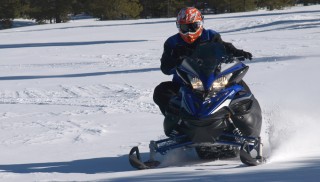 Is this the end the line for the Apex?

Yamaha’s Apex sets the standard for innovative and unique snowmobiles. Among its many engineering firsts are its motorcycle-based high-performance 4-stroke, the first and only production sled to have a four-cylinder motor. To make certain that the engine’s power gets to the track from idle to wide open throttle, Yamaha fitted it with its computer-controlled EXUP exhaust system. To keep steering light and precise, Yamaha added electric power steering. These are all firsts in snowmobiling. They are all innovative and unique, helping to set the Yamaha Apex apart from the premium sled crowd. There has never been a sled quite like the Yamaha Apex.

As we head into the winter of 2017, the Apex remains unique, but not as fast nor powerful as the all-new turbocharged Yamaha Sidewinder. While the Apex’ 998cc four may be the most powerful normally aspirated engine in the Yamaha snowmobile line, its 150-plus horsepower doesn’t match the 180-plus output from the Sidewinder’s turbo. In a lighter and more nimble chassis, the Sidewinder is quicker as well as faster overall. Does it mark the end of the line for the Apex?

While we anticipate that the Apex will carry on through the upcoming season and, perhaps, next season as well, the end of the line is approaching for the Apex in its current guise. As a premium snowmobile, priced at US$14,349, the 2017 Apex is $600 less than the new Sidewinder RTX, which Yamaha refers to as its “ultra-performance” model. The Apex is only Yamaha’s “top performance” model. Interestingly, both premium performance sleds derive their power from a 998cc engine, albeit a turbocharged three cylinder one in the Sidewinder. The Apex design is a high-revving four-cylinder that requires a reduction drive to get its output down to livable limits for the Yamaha YVXC clutching. The Sidewinder powers its 180-plus horsepower through new YSRC clutching without any gear reduction. Both sleds deliver turbine smooth power from idle up to full throttle. Although the Sidewinder turbo has more power, it delivers it in a very controlled manner and without any big power bursts along the way. It’s very similar to the Apex that way. Smooth, constant power. 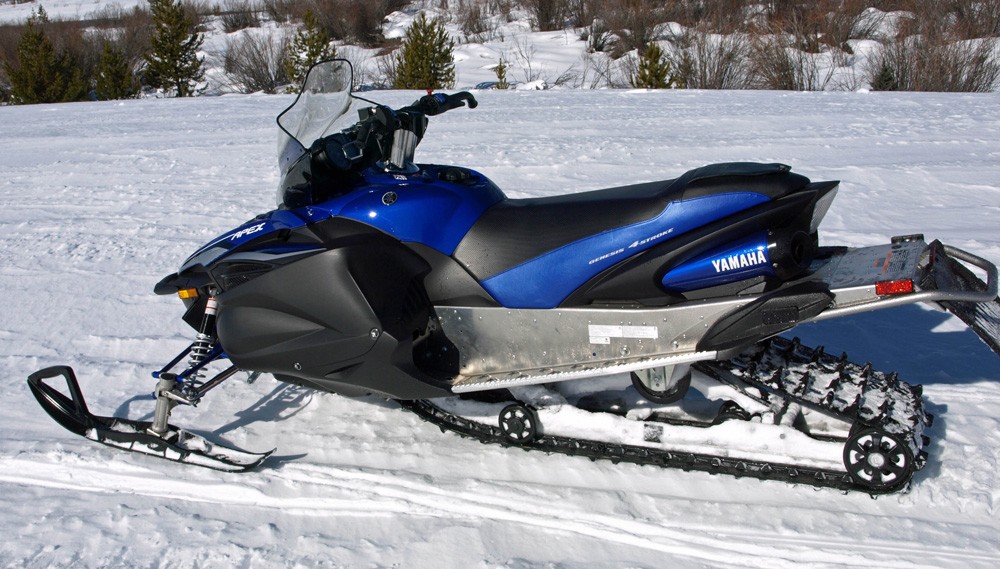 The Apex provides rider forward design that offers better control and makes it easier to get from a seating to a standing position.

One thing that the Apex has over the Sidewinder is its unique exhaust note. There is nothing in snowmobiling that emits the sounds of an Apex on its way to full revs. Nothing. Your ear takes in a sound reminiscent of a high speed motorcycle. You almost catch yourself waiting to hear quick shifts as the sled speeds across a lake. This is something that Apex owners know and can enjoy. Sorry Sidewinder owners.

The Apex came on the scene in model year 2006 and was intended to replace Yamaha’s RX-1, which had gained the unfortunate nickname of the “RX-1 Ton.” All-new, the Apex’ challenge was to regain lost Yamaha customers and generate excitement with non-Yamaha riders.

The 2006 Apex came with new styling, a new fuel injection system for the 150-horsepower sled, new seat complete with onboard storage, Yamaha’s version of rider forward ergonomics and new front suspension. Along with five more horsepower than the RX-1, the Apex engine delivered improved throttle response and increased torque. The rider-forward positioning moved the rider more to the center balance point, but actually a bit behind what Ski-Doo’s 2003 REV established. Interestingly, the second generation of REVs also relaxed the riding positioning. 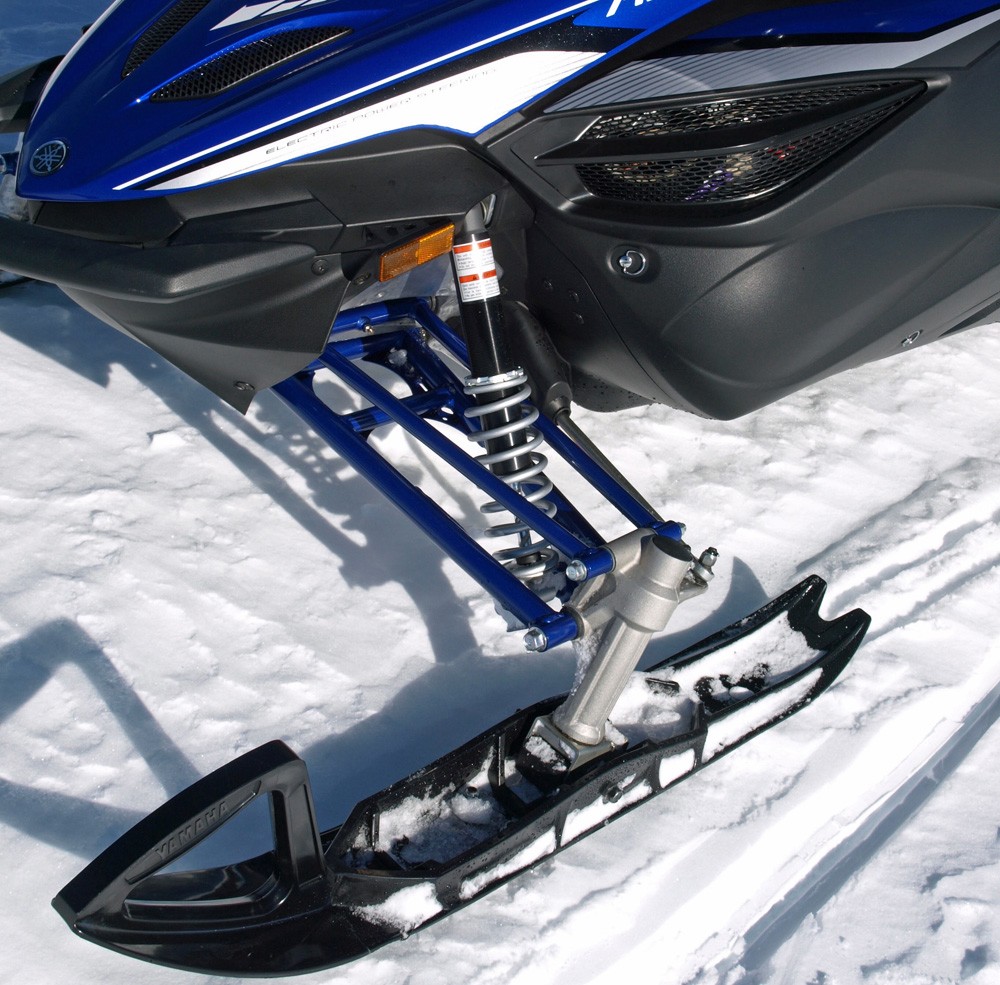 Tuner II skis reflect the latest in Yamaha engineering thought for a dual keel design that can be calibrated with a variety of runners and carbide lengths.

As a replacement for the first-ever four-cylinder RX-1, the Apex bettered the earlier design in virtually every way. Its rider-forward design offered better control, made it easier to get from a seating to a standing position and added more overall rider comfort. The Apex shaved pounds off the RX-1, its new double A-arm front suspension gave the sled flatter handling, and the fuel injection did wonders for on-trail performance. A special Apex GT version added an Ohlins electronic rear shock that was actuated via a thumb control on the handlebar.

This version of the Apex continued until a major re-do in 2012 that saw many under the skin changes that likely were ignored because the exterior showed negligible changes from previous designs. According to Yamaha engineers, very few of the 2012 pieces would retro-fit earlier Apex models. The front suspension got an upgrade, but looked similar to the previous A-arm set up. The seat was repositioned and stood taller for better ergonomics, but looked virtually the same as before.

Not until last year did the rear suspension undergo major change. The new SingleShot 129 Rear Suspension was quite a departure from the mono-shock with remote adjustment. The SingleShot is both 10 pounds lighter and fully coupled with a notable improvement in track tensioning. This suspension features a Fox Float 3 XV air shock with an extra volume chamber. This twin chamber design improves ride and handling with both air-spring chambers infinitely adjustable for the ultimate in fine tuning rider preference or conditions. 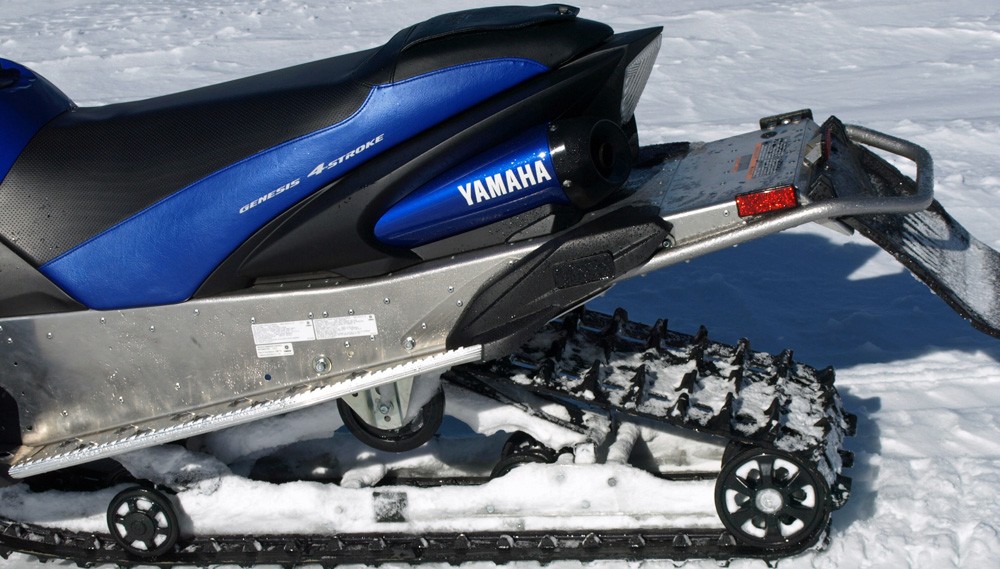 Both 10 pounds lighter and fully coupled with a notable improvement in track tensioning, the SingleShot Rear Suspension is quite a departure from the previous mono-shock design.

The base Apex comes with power steering that works with Yamaha’s Tuner II skis. These skis reflect the latest in Yamaha engineering thought for a dual keel design that can be calibrated with a variety of runners and carbide lengths. In concert with the premium KYB aluminum front ski shocks, the Apex enjoys precise steering with minimal negative on-trail feedback.

The Apex proved to be a solid entry in the premium sled category, but it also tended to get lost among performance riders, who viewed it as a sled for the older rider. They saw it as heavier than the Ski-Doo MXZ 800 or Arctic Cat ZR with less performance upside. To counter this losing battle, Yamaha over the years created rough trail and crossover versions like the Apex XTX as well as more premium trail versions like the Apex GT. Even with one of the industry’s best handlebar set ups, incredible convenience features, unique drivetrains and state of the art shock packages, the Apex gained little traction with the 25 to 35-year old performance-minded enthusiasts. That customer will likely gravitate to one of the various iterations of the Sidewinder.

Yamaha’s Apex offers one of the best-in-the-industry handlebars, complete with hooked bar ends.

As a premium sled, the Apex remains a state of the art snowmobile with truly unique features. But this sled is facing off with a sibling that is lighter, more powerful, quicker, faster and only US$600 more. You do that math.