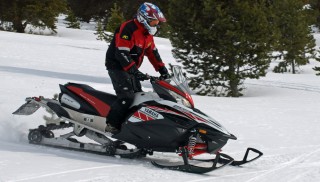 As the Yamaha Apex ends its 15-year run with the 2018 model, there will be some who truly will miss it and others who dismissed it years ago. While Yamaha marketing and engineering pays homage to this 2018 version by outfitting it with symbolic 50th anniversary graphics and the addition of a recycled Yamaha reactive suspension technology, the 2018 Yamaha Apex LE may surrender its position as top performance Yamaha to the turbocharged Sidewinder, but it will be remembered for pioneering many innovative tricks that made it a superior trail sled, with one glaring exception – weight!

No matter how you slice it, the Apex, which was born in 2003 as the RX-1, proved unique. It also proved that four-stroke powered snowmobiles could be serious top end screamers. With its high-performance street bike bred four cylinder four-stroke, this Yamaha emitted a sound unlike any other sled. Its idle note suggested performance that was backed up at full throttle with a race bike sonata broken free from four cylinders that merged into two exhaust extensions running under the seat and exiting freely at the rear. It’s a patented system and no other sled maker has it.

While unique in many ways, the RX-1 proved heavy and earned the sobriquet of RX-One-Ton, forcing Yamaha to change the model name to Apex. To counter the heavy steering at slow through the woods and club ride speeds, Yamaha added electric power steering and worked out various front suspension geometries. But it was EPS that helped the most, even if it did add weight. 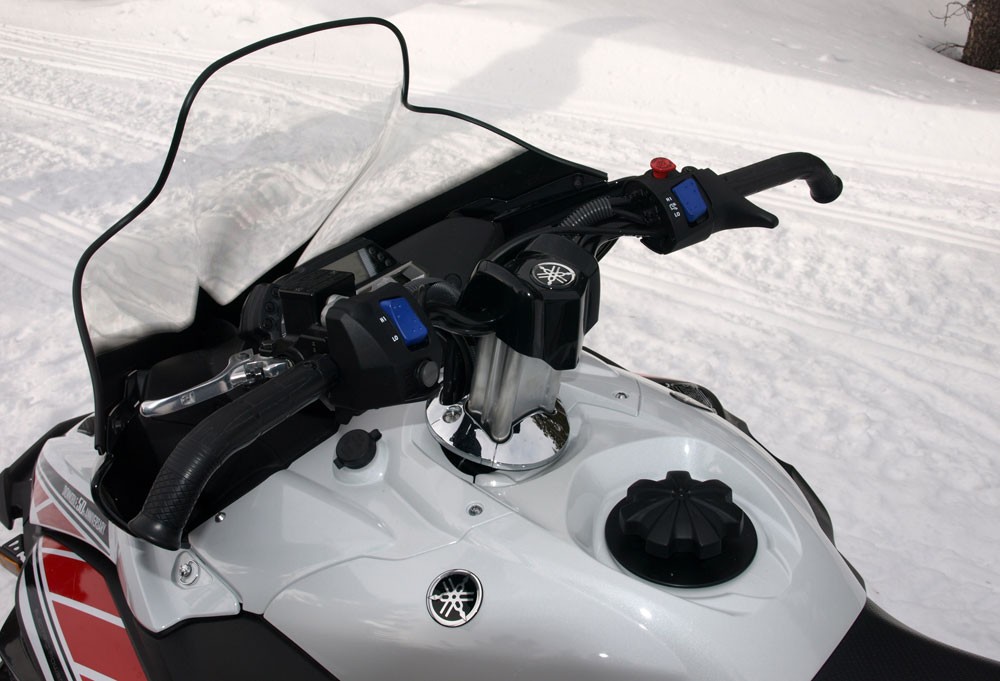 Now, with the arrival of the 200-plus horsepower Sidewinder turbo models, the Apex surrenders its position as Yamaha’s top performance sled. As we’ve noted in past reviews, the Apex served as the innovation leader. Look at its claims to uniqueness:

When the Apex undertook its first major revision about 2011, the sled looked virtually the same as the previous edition even if only about 20% of the new sled’s parts were interchangeable with the old design. The updates brought the Apex into the world of rider-forward seating and handling. Comfort was enhanced, but the sled remained heavier than its competition.

Now for model year 2018, the Apex closes out its run with another unique Yamaha technology. Like the four-cylinder engine, EXUP, performance dampers and electric power steering, the Yamaha Reactive Suspension System comes from other groups within Yamaha’s innovative engineering establishment.

Yamaha first worked up its reactive suspension technology from automobiles and its relationship with Toyota back in the 1990s. Essentially the snowmobile system is a very effective interactive shock absorber system that replaces two shock canisters with one extra volume master. The basic idea is for the shock to compensate for roll from one side to the other. Simply, instead of getting full shock action on one side and none on the “weak” side, Yamaha’s YRSS allows compensated damping from side to side as needed to maintain the most stable and flat handling possible. 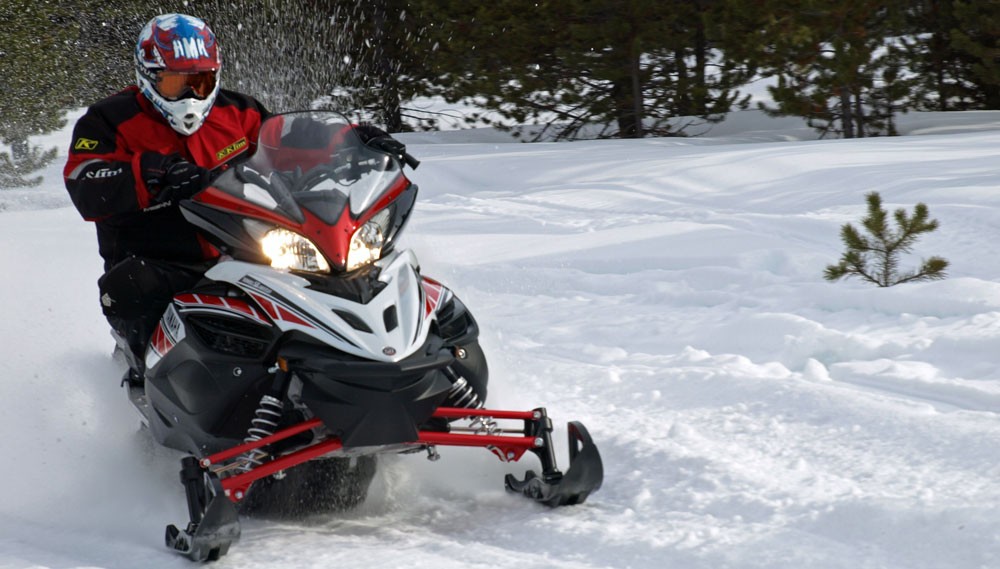 We found that the Apex YRSS did as advertised — kept the skis flatter and led to faster, controlled cornering.

Yamaha replaces the normal one-per-shock reservoirs with a singular one that is linked via hoses to each shock body. While the independent shocks perform pretty much as before, the oil/gas mix is strategically distributed side to side based on need to keep the sled flat through the corners.

As Yamaha notes, “This exclusive Yamaha technology connects the two front shock absorber bodies hydraulically. Oil flows between the shocks through a YRSS control unit that affects damping and volume transfer based on the movement and forces generated at each ski. This system helps control lateral roll without compromise to bump compliance and comfort. The net result is an overall improvement in ride quality with more precise handling over conventional shock absorbers which must compromise ride comfort for roll stability using independent damping calibration and stiff springs.” 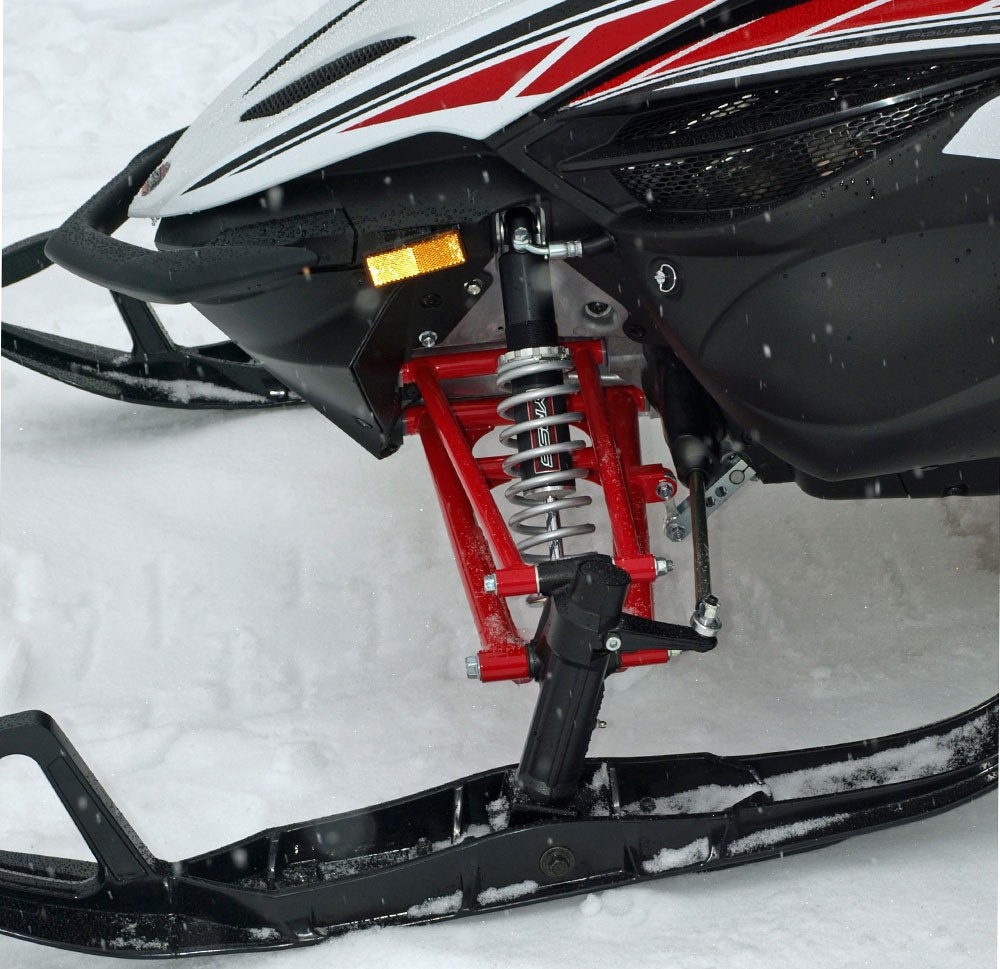 Yamaha’s own independent front suspension features shorter ski spindles than the Viper to keep its proprietary Tuner skis in contact with the trail.

Although affixed to the 2018 Yamaha Apex LE, expect future Arctic Cat-produced Yamaha models to offer some version of YRSS. Of course, that may be dependent on how the new Textron/Arctic Cat arrangement with Yamaha works out in the months to come.

We can state unequivocally that the YRSS works. Unlike Yamaha’s add-on Performance Dampers, which we never sensed working nor not working, this front-end system definitely can be felt. Plus, as we did photo sessions with the sled, we could see the YRSS in action as it kept the Apex’ skis planted. 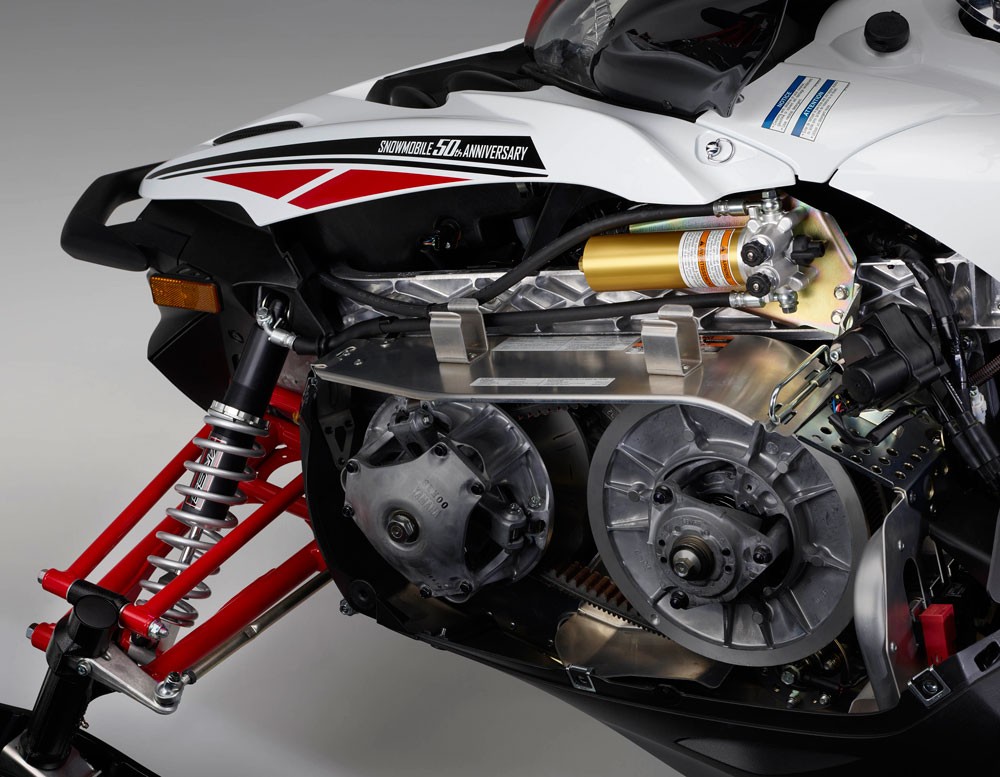 Yamaha’s exclusive reactive suspension system connects the two front shock absorber bodies hydraulically so oil flows between the shocks through a control unit that affects damping and volume transfer based on the movement and forces generated at each ski.

Oftentimes, we get the sense that the “feel” for new innovations, especially of the sensory type like performance dampers and such, tend to be marketing mind games where a thought is planted and we never disabuse those thoughts even though we can be fooling ourselves into thinking we “feel” a difference. Performance dampers proved too subtle for us to sense over trails that constantly changed and negated nuance. YRSS, on the other hand, proved real and photograph-able. The skis did stay flat and the sled’s front end did apply bias back and forth as claimed.

Unfortunately, while the 2018 Yamaha Apex LE adds innovation, it has failed to keep up with basic ergonomic changes in recent years. As we also had a new Cat-built Sidewinder along with us when reviewing the Apex, we could feel the ergonomic differences between the two high performance Yamahas. For one, and a major difference for us, is the seating. The Apex seat is too soft and sits too low, placing the rider’s butt below the bent and extended leg. Compared to the Sidewinders or Vipers, the seating positon fails to offer the comfort and quick ride-forward action you need in rough trail sections. Even the steering post seemed too upright as compared to a Sidewinder, but the use of power steering mitigates the rider’s effort to control the nose-heavy Apex. A plus for the Apex.

Yamaha may be ending the Apex after the 2018 model year, but this premium Yamaha-built heritage model goes out with upgraded SingleShot rear suspensions – a 129 in the 2018 Yamaha Apex LE 50th and the SingleShot 146 in the limited edition in the Apex X-TX LE 1.75 50th – that both enjoy the benefits of the extra volume Fox Float XV shock. 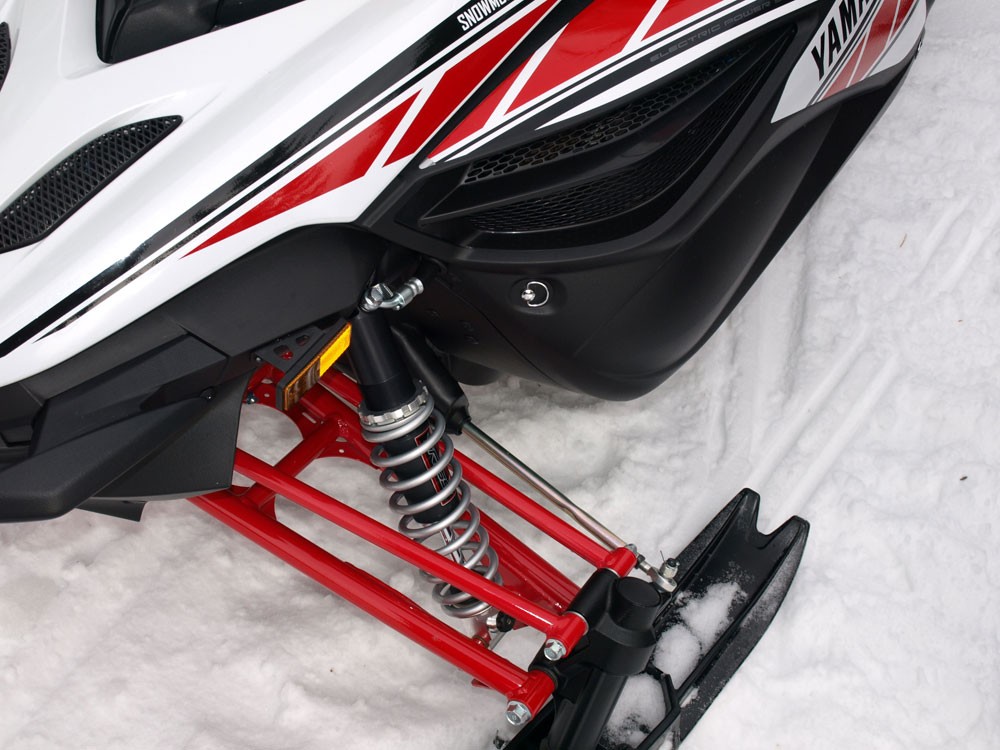 The Apex YRSS replaces independent shock reservoirs with a single larger capacity one that helps control lateral roll without compromise to bump compliance and comfort.

Keep in mind, if you want to score an “instant classic” Apex LE 50th anniversary edition, you must order it soon as the 2018 Yamaha Apex LE models are only available during Yamaha’s Spring Power Surge event that expires April 15th.

We do call the 2018 Yamaha Apex LE models an instant classic as they are the only end of the Apex series fully-loaded versions you can get. The LE versions have it all, including unique 50th anniversary red, white and black graphics that celebrate Yamaha’s 1968 entry into snowmobiling. All of Yamaha’s major innovations from power steering to YRSS reside in these LE models. While we prefer the Sidewinder overall, the Apex reminds us of Yamaha’s legacy.