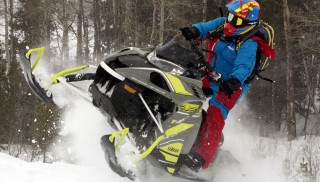 Who in the heck would want the 2018 Yamaha Sidewinder B-TX, a 200-plus horsepower crossover snowmobile? Well, officially 180-plus, but who’s kidding here? This is a serious big power sled and the question remains, who would want all those ponies under the hood?

“What could we possibly do?” Grin, bust some loose powder, burn some trails, and let our fellow ride mates see nothing but the taillight.

Recently we wrote about Yamaha’s turbocharged mountain snowmobile, the Sidewinder M-TX. Here we share our fun thoughts on Yamaha’s boosted crossover, the B-TX, “B” for “boondocker,” we assume.

There is something truly unique about Yamaha’s deep-powder crossover, the B-TX, in that it is a 153, where most crossover snowmobiles are in the 141- to 146-inch length. This means the 2018 B-TX is a crossover built for the rider who really is an off-trail explorer. 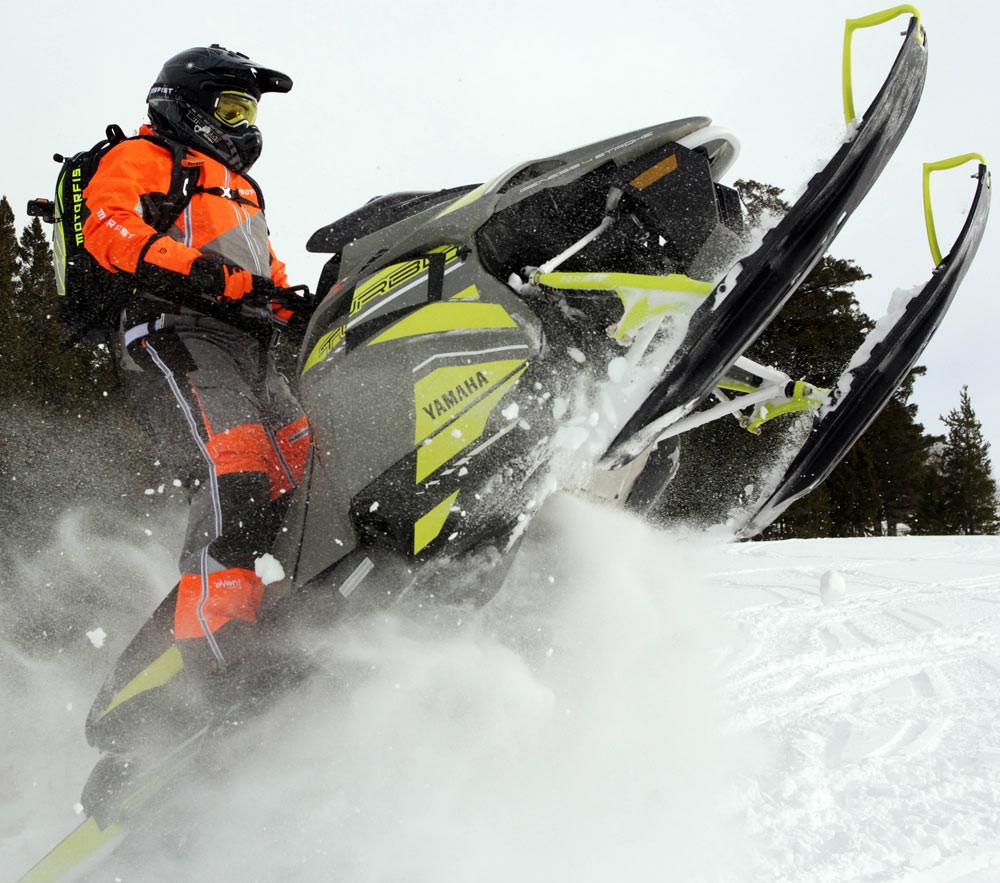 When opened up, the B-TX, this the SE, will kick up its nose while all 200 horsepower tames mountain, trail and meadow.

For model year 2018, two B-TX models are available from Yamaha, the B-TX LE and B-TX SE. The LE is Yamaha’s Spring-buy “Power Surge” model and it comes in Yamaha’s 50th Anniversary colors, white, black and red, and has a tough looking short black windshield. This Spring-buy B-TX comes with a 2.25-inch PowerClaw track that is 15 inches wide. The LE relies on coil-over Fox QS3R shocks at the front spindles; each front shock has remote reservoirs and three-way QS3 damping adjusters. The front skid frame arm uses the damping adjustable Fox QS3 shock whereas the rear arm uses the same shock the front suspension depends on; the QS3R with remote reservoir and three-way damping adjuster.

The in-season B-TX is the SE and comes in gray with green accents; though not a 50th Anniversary model, the SE is sharp looking. Its track is the 1.75-inch Camso (formerly Camoplast) BackCountry X; its lugs are one half-inch shorter than the LE B-TX. The front end depends on Fox Float 3 shocks to take the leading hits from a trail. The rear suspension’s front rearmost rail shock also is the Fox Float 3. The center shock on the rear suspension is a monotube aluminum high pressure gas shock 1.5. 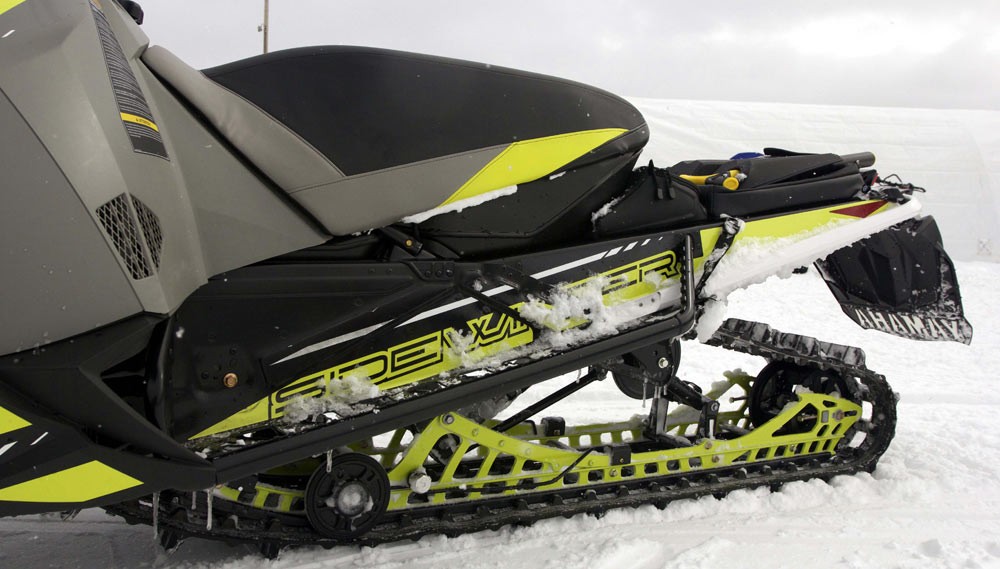 Recently, we read some Facebook comments to a Snowmobile.com story where many snowmobilers aired out their thoughts that the snowmobile builders are concentrating their efforts on the mountain market more than the trail market. When we ride hot rod crossover snowmobiles like the 2018 Yamaha Sidewinder B-TX and its high-tech purpose-built turbo motor, we kindly disagree. Yamaha, like the other OEMs (Original Equipment Manufacturers) have awesome technology that is rolled into their trail and crossover snowmobiles. The crossover market is a growing market where demand for such purpose-built snowmobiles helps steer the OEMs to the direction they need to go (build products to satisfy demand). We believe the crossover market is a healthy market as well as the trail market. 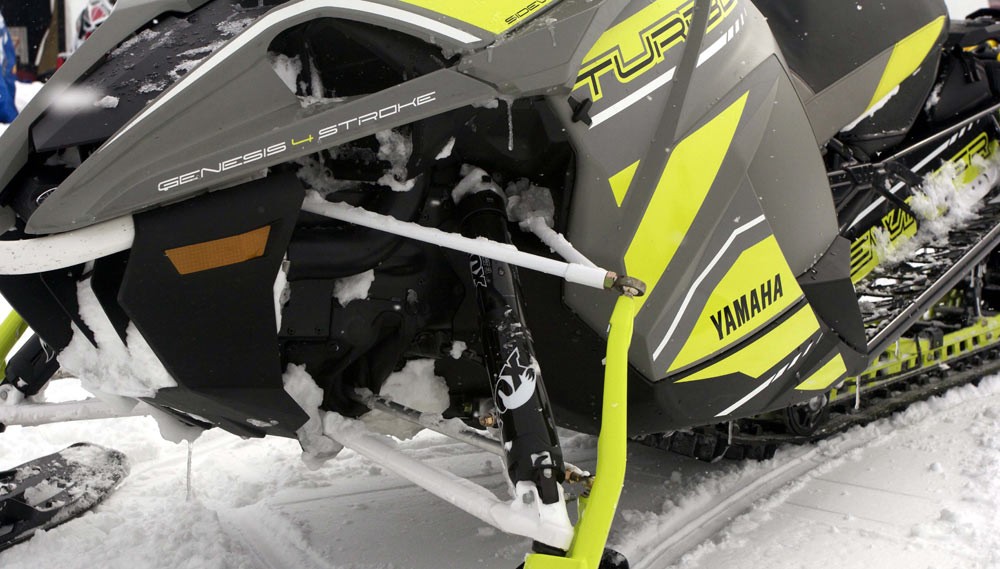 With a hood designed to dump hot underhood heat, cinched-in side panels, narrow runningboards and tipped-in spindles, the B-TX is a powder bound.

Our seat time on the 2018 B-TX, over a period of several days in the backcountry behind West Yellowstone, Mont. late February and early March 2017, gave us time to flush out its personality – the shine and the scuffs. Snow conditions were powder, hero snow (packed powder from a gazillion tourists) and Spring-like mush.

When the big triple winds up and unwinds on the trail, its smooth RPM is manageable. The most novice rider to the most experienced rider will find the B-TX to be gentle and blinding fast; there is 200-plus horsepower bolted to the lightweight SRV chassis, and it deserves a rider’s respect. Because the Sidewinder B-TX’s motor is so quiet, it is sneaky and stealthy fast. As the motor finds its mojo, the MPH clock climbs ever so high – fast.

Boondocking in trees and on gentle slopes, the 2018 Yamaha Sidewinder B-TX has character; it did not intimidate any of our test riders. When hopping up over dead fall trees and deep snow-covered rocks, the B-TX when in low- and mid-RPM, just lumbered over these with nary a faint; so simple it was. When we dropped off some steep slopes, or barreled off a cornice (as if this was an M-TX) and sped down a runout, Yamaha’s EBRS – Engine Braking Control, kept us smooth and in control. Yamaha developed “a system which employs the ISC (idle speed control) circuit and ECU map using throttle valve movement and RPM information to reduce negative intake pressure during deceleration.” 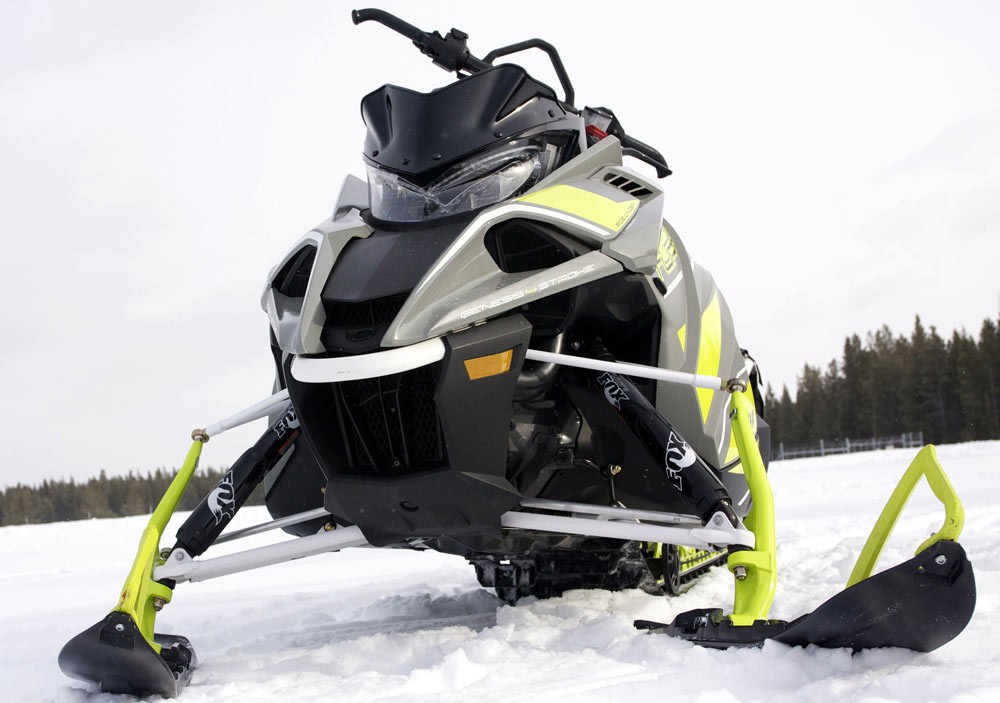 The 2018 B-TX has a front end that is set for both trail and powder, an adjustable 40-inches. Though a crossover, it tracks on powder-specific skis. Two track options are available.

This system makes this crossover snowmobile, as well as companion deep-powder bomber, the M-TX, forgiving when running off a hill or decelerating from a high-speed trail run.

Here are the few blemishes we uncovered. When boondocking, following two-stroke counterpart snowmobiles, the B-TX is at home, provided the snow does not exceed two feet. For the SE and its smaller lugged track, it can play in, perhaps, 18 inches of powder. The LE can master the two-foot level. But, as we spent much time on the SE, we learned in Spring-thaw snow, the SE’s track would blow out in the Spring snow, and not hook.

For both 2018 Yamaha Sidewinder B-TX models, the wide ski stance made it difficult to set it up on edge, even in the correct conditions. Our testimony, if taking the B-TX off trail, is to cinch in the ski stance to its narrowest setting. 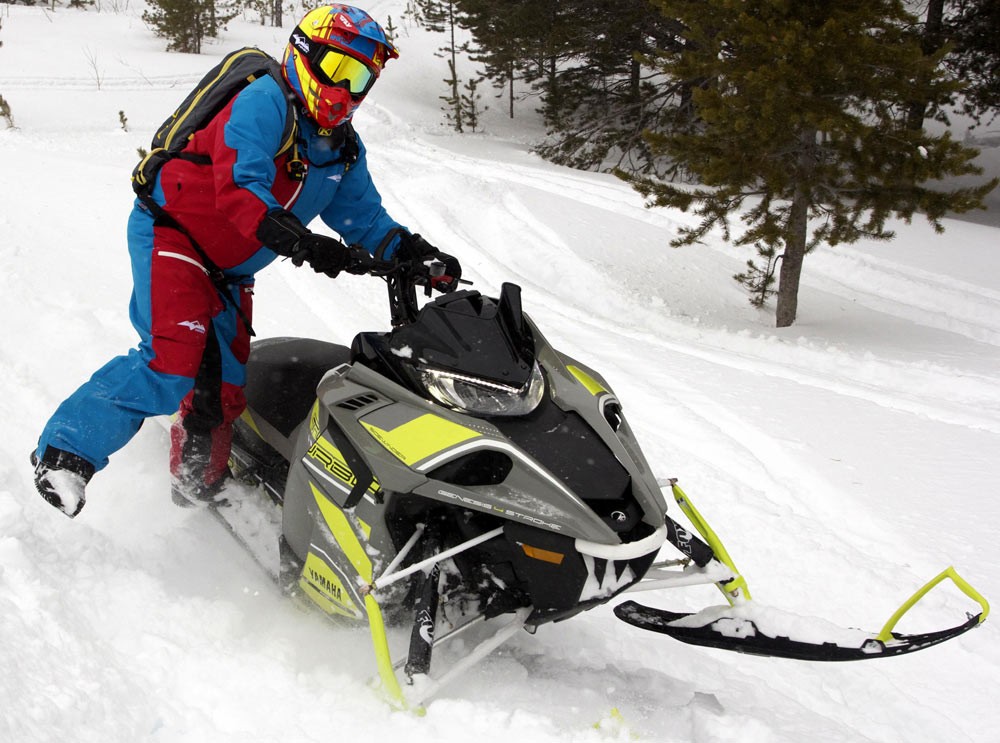 With a ski-stance at 40 inches, the B-TX, at times, can be difficult to set on edge, especially in hard, compact snow.

One other upset, with the B-TX having a heavy motor over the skis, there will be times, when playing in Spring snow – hard crust for several inches and loose depth hoar below – the B-TX, when on edge to carve a sharp turn with the driver in a wrong foot forward position (right foot in left toe well, left foot out leading), will cut through the crust with the front end and dive through the depth hoar and possibly eject the rider as the B-TX either falls completely over or comes to a stop with the bumper and belly pan lodged under the crust, and one ski,  the on-edge ski, pointing straight up. We learned this by accident and replicated it at will.

So, let’s review the B-TX. It is a fine, very fine, crossover snowmobile; its boost, its ride, its trail stability and user friendly high-horsepower motor is welcomed. We recommend the LE B-TX for its taller lugged track. If the SE, we recommend, if going off trail, to swap out the Camso Backcountry X track for the LE’s PowerClaw 2.25-inch track. 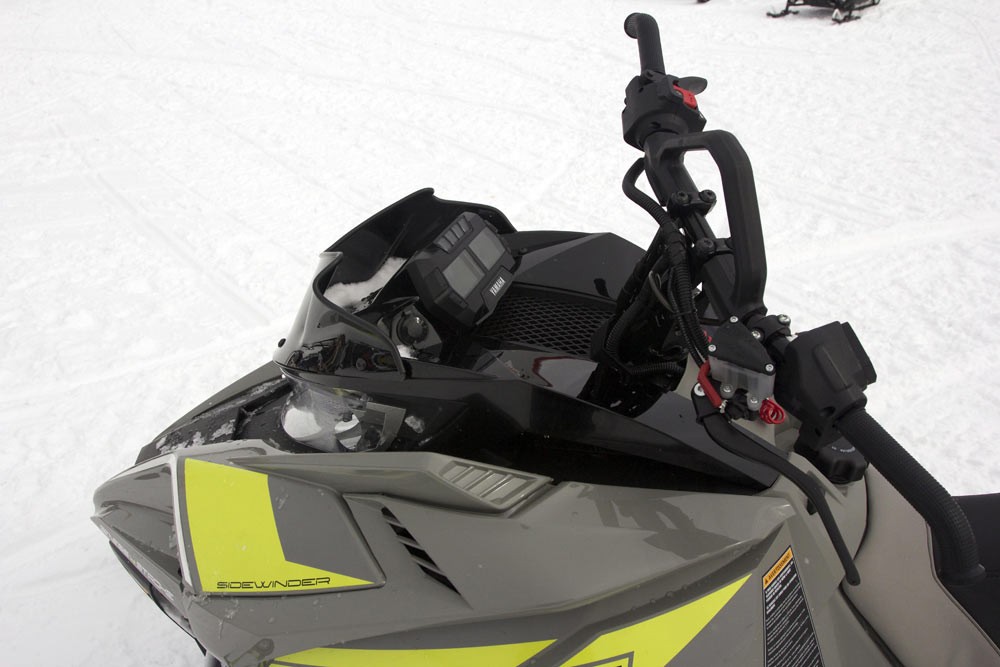 Also, the B-TX is equipped with one of the best mountain skis on market, if not the best. But, understand when the B-TX is on edge, the motor’s weight wants to force the on-edge ski down into the snow – the ski will cut through the snow and pull the snowmobile down. The best way to overcome this is too anticipate your on-edge turn and have sufficient speed to transfer motor weight to the track. Can it be done? Absolutely. We did it.

Alright, we reported in our M-TX story the benefits a turbocharged motor gives. The biggest is consistent horsepower. The B-TX as it climbs in altitude, its 200-plus horsepower goes with it. Thin air does not affect the B-TX like other crossovers – two- and four-stroke – that do not have a turbocharger (or supercharger). In short, the Genesis’ 200 horsepower is always available and gives the B-TX excellent power-to-weight; and this improves as the B-TX climbs.