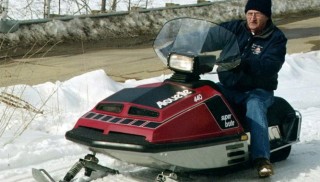 The forerunner to the 1984 Yamaha Phazer

In the early 1970s there were many revolutionary snowmobile companies each doing their own part to increase snowmobile comfort and performance with bold new ideas and innovations. Among them Alouette left a lasting impression on the snowmobile industry and likely played a role in future designs.

As racing wove itself into the fabric of the snowmobile industry, Alouette enjoyed great success racing the 1973 Alouette Super under well known snowmobile racer, Jacques Villeneuve, who later would have success racing Indy Cars and recently returned to race vintage snowmobiles throughout both Canada and the USA. ‘Win on Sunday, Sell on Monday’ applied to Alouette as the company began to incorporate its cutting edge race technology into its production snowmobile line. This heritage gave birth to the 1974 Alouette Super Brute.

Many Super Brute innovations evolved from designs on the 1973 Factory Race Sleds. The Super Brute also drew from previous trail sled designs. Its ‘ski sorber’ front suspension was an improvement on the common leaf spring suspension and was introduced on Alouette’s 1973 model year production sleds. With its solid pivot arm and coil over shock handling improved as it tamed the ‘bounce’ common with traditional leafspring front ends of the time. Had Alouette continued building snowmobiles this design more than likely would have evolved into an independent front suspension (IFS) system. Possibly the IFS-equipped Skiroule Factory Racers that Villeneuve piloted in 1976 were concept possibilities carried over from Alouette’s pipeline. 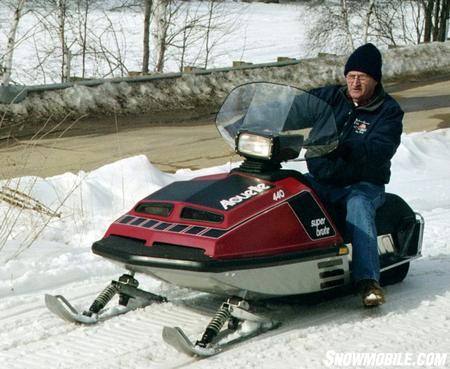 The Super Brute used a complete aluminum chassis bearing similar design aspects as the 1973 Alouette Super Factory Race sleds. A solid front cross member helped shed a few pounds over the previous steel bulkheads and the overall strength and rigidity was retained through testing on the track. While Alouette was not the first company to utilize this aircraft style aluminum riveted chassis, it still was not common place in the industry.

The Super Brute featured a unique lightweight seat that utilized a fiberglass backbone to lighten the load a bit more by creating an air cavity between the seat and the tunnel. To protect the rider’s legs from coming in contact with the chassis, the seat was stretched over the sides of the tunnel. It also integrated a handy glove box that was stylistically set off with the Alouette crest proudly displayed. The gas tank was conveniently located under the front of the seat, tucked in behind the steering post and concealed with injection molded plastic side panels. A unique cold air intake and hot air exhaust were designed during the 1974 season to address engine cooling issues. It routed warm air from under the hood to just in front of the riders mid section. As a factory service bulleting from Alouette, plastic and fiberglass duct work was retro fitted on all 1974 model year machines.

The instrument cluster sat atop the steering post and housed a speedometer, head temperature gauge, choke, ignition switch, and headlight. The high/low beam and engine kill switch were located on the throttle and brake housings. All this was neatly tucked in behind a full windshield that helped protect the rider’s hands and provided more than adequate wind protection for the time. More importantly, this all turned as the rider turned the handlebars. The headlight would actually point in the direction the snowmobile was headed, rather than just straight ahead.

The rear suspension was a steel slide rail set up running inside an involute drive with a solid window-less track. The suspension was equipped with low snow wheels and a giant shock-less suspension spring set up with two giant coil springs responsible for sucking up the big bumps. 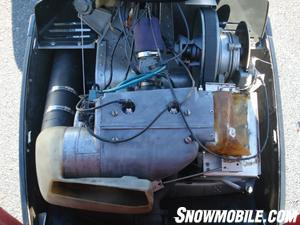 The Super Brute was available with three fan-cooled Sachs twins: 295 cc, 340 cc, and 440 cc. Each engine was equipped with a Mikuni round slide carburetor and single exhaust pipe that exited out the bottom of the right-rear belly pan. Brochure pictures from the time show a liquid cooled 440 cc engine, but it is not known if any are in circulation today. While Alouette claimed a liquid-cooled version of its Super Brute, it was Brutanza in 1972 that actually produced the first production liquid cooled snowmobiles. The small Minnesota snowmobile company was still producing a liquid cooled twin and triple snowmobile in 1974.

Alouette ended up calling it quits in the snowmobile business at the end of the 1974 model year. Ohio-based snowmobile maker Rupp acquired the Alouette snowmobile line and continued to build sleds incorporating the names of Super Brute, and Sno Duster into the following two model years, but that ended after the 1976 season. However, Rupp never incorporated the forward thinking design of the 1974 Super Brute, instead the Alouette name was attached to Rupp Nitro style chassis powered by a liquid cooled engine.

Although it may seem that this Alouette’s design characteristics were left for dead during this transition period, snowmobile history would indicate something else. In the middle of the 1980s Yamaha brought back an uncanny number of the Alouette’s unique designs and built one of the best selling and longest production run snowmobiles in history. In fact most people would equate most of this description with that of the 1984 Yamaha Phazer.

Were the similarities between the 1984 Yamaha Phazer (left) and 1974 Super Brute coincidental or deliberate?

Complete with a Super Brute style handlebar-mounted headlight pod, the Phazer was built from 1984 to 1989. Retaining Yamaha’s unique telescopic strut front suspension (TSS), it was upgraded to the Phazer II in 1990 and sported a wider front end among other subtle changes. This design lasted through the 1998 season and was replaced with the recently proven and popular Pro-Action Chassis that was built from 1999 to 2001. 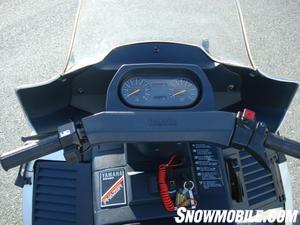 Like the Alouette, the Phazer console houses instrumentation and the headlight.

The Phazer Mountain Lite remained in the Phazer II ‘pogo-stick’ chassis for one more year in 1999 before moving to the Pro-Action chassis. Yamaha left the Phazer name out of its line-up from 2002 to 2006 while major changes in snowmobile philosophy developed. After dramatic changes in 4-stroke technology, the Phazer name badge appeared on the snow in 2007 as a light weight, rider-forward, 4-stroke snowmobile. While little from 1984 was retained in this new design, the instrument pod and windshield are handlebar mounted and carry on the Phazer flair – or, should we say original Alouette design concept.

While the facts are not truly known, rumor has it these similarities between the Alouette Super Brute and Yamaha Phazer may be too much alike to be coincidental. My father, George Burdick, was an Alouette Dealer from 1972 to 1974 in central New Hampshire. He recalls that after Alouette decided to cancel production for the 1975 model year, he was asked to return all unsold product, parts, and accessories to the factory. Some time passed before his path crossed with the former Alouette distributor, who claimed that Yamaha purchased a 1974 Alouette Super Brute brand new in the crate and shipped it to Japan on the first boat headed west. If this is the case, it is easy to see how the styling designs and mechanical engineering was folded into the Yamaha Phazer. Was Alouette’s 1974 technology and styling ahead of its time? Or was it the fine marketing skills of a major snowmobile company that brought many of the same designs to life 10 years later and claimed one of the best selling models in snowmobile history for themselves? We’ll let the pictures speak for themselves.