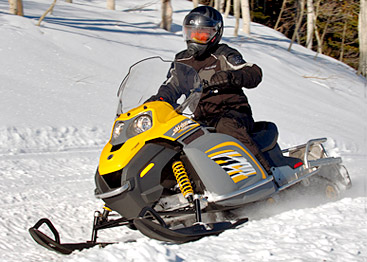 This ‘snow shoe alternative’ delivers on both utility and fun

Ski-Doo’s Tundra is the Swiss Army knife of snowmobiling, or, if you think another way, the fun alternative to the snowshoe. Totally redesigned for the 2006 model year, the Ski-Doo Scandic Tundra (its official nomenclature) began as a kind of long tracked Freestyle.

Under the pyramidal front frame rested the same 268.7cc fan-cooled Rotax motor as the Freestyle. The big difference came with the two sleds’ footprints. The Freestyle was supposed to appeal to young riders so it had a shorter easier-to-handle rubber track. The Tundra, as its name implies, was designed to run in the bush off-trail.

Back in its introductory season, we discovered that we actually preferred the longish 136-inch track Tundra to the Freestyle. It was especially well-suited to off-trail riding. With the minimal power of the single cylinder engine, it was nearly impossible to induce track spin—unless you sat on glare ice! That meant that the engine’s low-end torque and ‘thump-thump’ gearing could get you in and out of places that were apt to bury more powerful deep snow sleds. Combining low-end grunt with its 15-inch wide by 136-inch long footprint made the 2006 Tundra a logical choice for trappers and ice fishermen who needed a stout, nimble sled to traverse the backcountry. 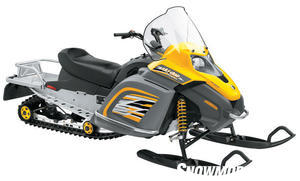 Based on the Freestyle, the Tundra 300 spins a 136-inch long track.
Modest power

In terms of power, the Rotax Engine Type 277 used in the Tundra is a power lightweight compared to Ski-Doo’s new 800cc twin. With a very modest 27 horsepower rating, the Tundra single remains in the Ski-Doo line because it is reliable and proven dependable—traits you want off trail. Heck, the Tundra and its little engine are very reminiscent of the original ‘light-footed’ Ski-Doos of the 1960s—only much better.

Back then the ride would leave you with a sore back and aching knees. Today’s Tundra borrows from the REV style of upright ride position and modern suspensions. At a claimed weight of 380 pounds, the Tundra is a good 100 pounds heftier than those original light-footed models, but nonetheless capable in snow. With wide footboards and a raised handlebar, a rider can move around quickly to adroitly maneuver through an evergreen forest or a backcountry fire road. Let’s not forget that if you do miscalculate, this sled is light enough to yank out of most situations. 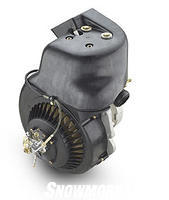 Rated at 27 horsepower the Rotax single is reliable and strong at low end.
We found the Tundra changed for the better for 2008. We appreciate the wide plastic skis and like the added adjustment in the front suspension. The 6.3 inches of travel makes the ride supple thanks to Motion Control shocks. A high-pressure gas shock at the back of the slide rail rear suspension complements the Motion Control shock used on the parallel rail design’s front shock arm. There is a useful travel range of 13 inches.

The windshield is huge compared to a Freestyle, but if you were to choose a Tundra as your snowshoe alternative, you might consider swapping out the huge plastic windscreen for a more modest version, perhaps the midsized one used on the Freestyle 300F or the slightly larger Freestyle Backcountry one. For traversing fluffy deep powder, the standard windshield is best. You can stand up, steer the sled with your body motion and watch the snow blow off to the side or over you. See, that’s the beauty of the Tundra. It is highly maneuverable in tight areas and well suited to pokey explorations. 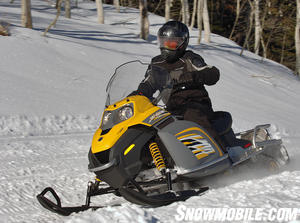 More than a utility sled, the Tundra proves a fun ride on or off trail.
Spunky lightweight

With its lightweight, spunky but diminutive engine and ample footprint, the 2008 Tundra is a modern day Ski-Doo Elan, but with comfort. The long-lived Elan enjoyed a historic stay in the Ski-Doo model line, but it was never known for comfort. The Tundra offers comfort and more utility than the Elan.

The 2008 Tundra with the single cylinder engine would be our first pick if we were to get rid of our showshoes. Of course, we might just pack our lightweight, aluminum-framed snowshoes in the rear cargo area and ride out to a remote sport for a little extra recreation. The Tundra can get us to areas too far to hike into so we can enjoy a snowshoe hike and a fun ride as well!

Light, nimble, simple and low cost (US$5,349), we think the fun quotient you find with the 2008 Ski-Doo Scandic Tundra 300F makes it worth a look. Maybe it’s not the primary sled, but it’s a nice sled to have around the cabin.