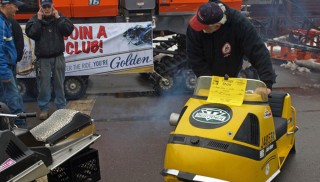 Choosing winners at a vintage show is not easy

This vintage snowmobile thing brings together snowmobilers of all ages with their very own personal memories. If you attend a vintage snowmobile show, you’ll have memories of your own, just like the owners of the classic sleds being showcased. You’ll find yourself sharing and swapping a memory or two at such events.

That was us, sharing memories of old sleds and experiences this past December 13th at the Second Annual SNOWfest Film Festival in Wahkon, Minn. In addition to premiering various action snowmobile videos such as Alpine Assassin 5, Boondockers II and BRAAAP 13, this year’s event presented a pretty nifty vintage snowmobile show that nearly tripled the population of this lakeside community of 208. The show sponsors enlisted Dave Guenther, past president of the Antique Snowmobile Club of America, and me as official judges. Fortunately for me, Dave had experience as a judge and as a contestant. His input proved invaluable, as we had to select class winners in six categories and an overall Best Of Show. 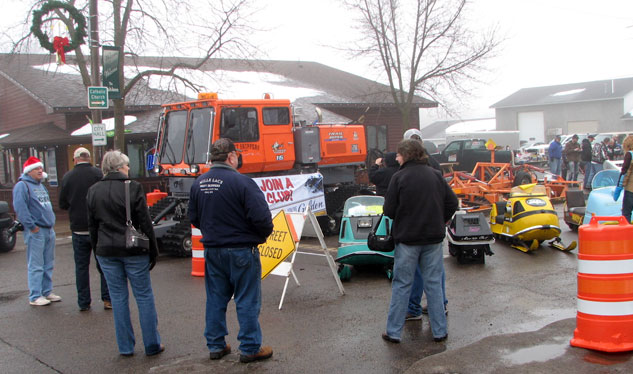 The second annual Somewhere North of Wahkon (Minnesota) film festival also included a vintage snowmobile show. Although there was little to no snow, the event drew enough people to about triple Wahkon’s 208-population base.

We had to wean the list from nearly 50 choices that spanned the decades from the mid-1960s up to 1990. Entrants ranged from antiques produced prior to 1968 and fully restored race sleds from the 1970s to original barely-been-touched “survivors” complete with original paint, chrome and decals. And how do you choose between the unique and unusual?

While I’ve been in the snowmobile business for a long time as sled tech, writer, photographer, racer, test rider and as a TV judge on the snowmobile episode of the old Junk Yard Wars series, this was my first serious stint as a snowmobile show judge. Unlike the Junk Yard Wars judgeship, which was a specious one where the results were pretty much predetermined and the “sleds” as real as a reality star’s enhanced looks, this judgeship counted. Many of the sled owners had spent countless hours and travel finding just the right pieces to make their showpiece as accurate as possible. When you consider that obscure brands like a Bolens Hus Ski was only produced over the winter of 1964-1965, you need to appreciate the efforts made to restore such a vehicle and have its 10-horsepower JLO motor in running order. 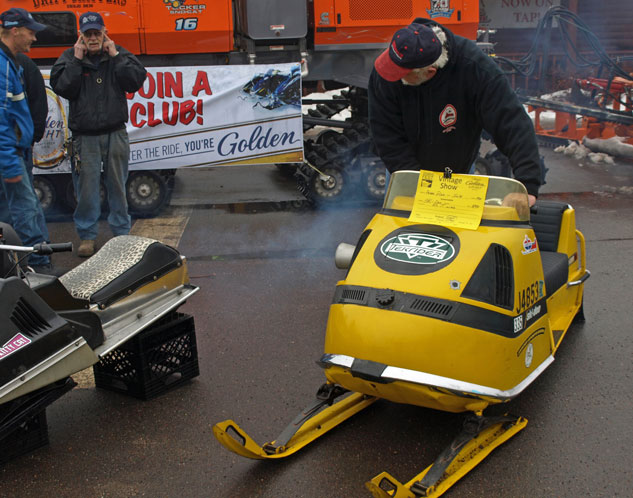 Firing up a vintage Ski-Doo Olympique with a megaphone exhaust is a noisy affair. Exhaust pulses spread more than six feet from the sled.

Frankly I can admit to being intimidated by the task. When faced with the actual assemblage of sleds, I was somewhat overwhelmed – and this was a small show by vintage show standards! But where have you been where there is an original 1973 Swinger, which used a small Chrysler two-stroke single, measured 72 inches from ski tip to snow flap and retailed for less than US$600? Seen many Boatel Grand Prix models with the butterfly steering and full chrome trim? There was one of those at the SNOWfest vintage show. In fact it was one of only 100 ever made in nearby Isle, Minn. And the full-on, one-of-a-kind Polaris X-3 speed racer with its twin triple cylinder engines and lay-down seating position was on hand to take Best in Show. Intimidating? Absolutely. 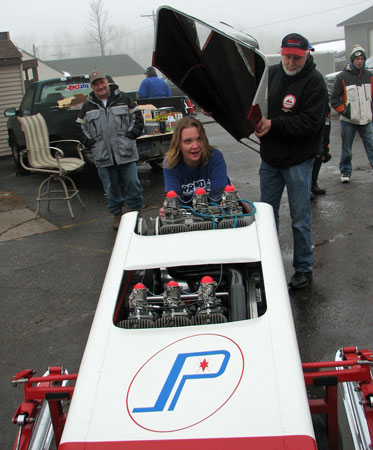 As fellow judge Dave Guenther and I walked amongst this sled history, we shared moments with others. The young man with the 1972 Ski-Doo TNT 640 told us he had another that he was working on. The one at the show was an everyday runner that he rode. Other classic sleds included Ron Lemke’s 1976 Mercury Trail Twister, which was selected as the winner of the Vintage 1975-1980 category. Erik Radke of Wahkon brought out a 1982 Ski-Doo Blizzard MX 5500 to win the Classic 1981-1990 classification.

Maybe my favorite had to be Darwin Fleck’s original 1970 Evinrude Skeeter. This is a sled that has been in Darwin’s family since it was purchased new at the Evinrude dealership in Little Falls, Minn. more than four decades ago. Considered heavy in its day, the Skeeter’s standard electric start still fires up its Evinrude twin and Darwin used its standard reverse gearing to back the sled into place for viewing at the show! With all original paint, the Skeeter earned Fleck the trophy for Survivor Best in Class. This survivor still gets used a few times a season on the Fleck family acreage. 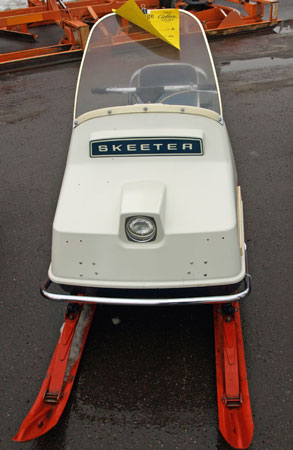 This 1970 Evinrude Skeeter has been in owner Darwin Fleck’s family since it was bought new 44 years ago at a local Evinrude dealership. It is still ridden around the family acreage a few times each winter.

When it came time to tally our ballots and make the hard choices, we hesitated. We felt the need to walk around the sleds again – and again! This judging thing isn’t that easy. For me, anyway. 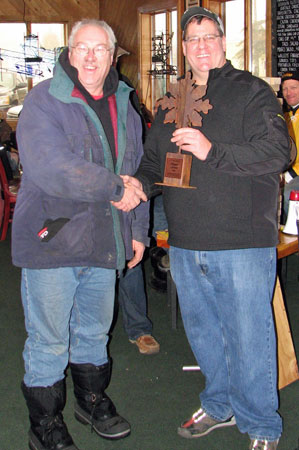 Looking at select sleds brought back memories. That 1972 Ski-Doo reminded of a 1970 399cc Ski-Doo that had puked a seal about a mile from the end of my intended ride, forcing me to walk home. That 1976 Mercury Trail Twister brought back memories of riding a pre-production Trail Twister “hell-bent for election” down the hills and rough terrain of Tiger Run in Colorado. Although Mercury’s liquid-cooled Sno-Twister racers enjoyed a reputation for handling, the fan-cooled trail versions couldn’t claim that distinction – with me, at least. I remembered that test model as squirrelly and quite a handful at top speed in rough terrain.

The class-winning Ski-Doo Blizzard MX 5500 was similar to a Moto-Ski version I test rode once. It brought back memories of a near-death kind. On an especially well-groomed section of Minnesota’s North Shore trail, that sled parked itself in a trailside tree – totaling itself by shortening the length and moving the engine’s primary clutch back into the secondary drive. Fortunately for me, I also was testing out a new safety vest and upgraded helmet or I wouldn’t have limped away from that crash! 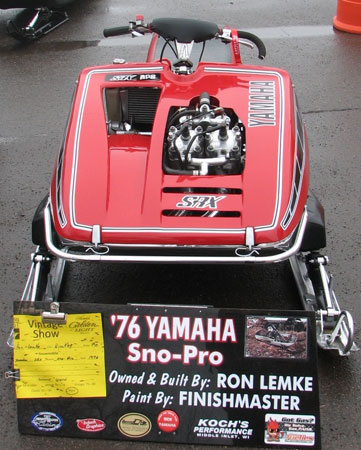 The quality of sleds at vintage events is amazing. This Yamaha SRX racer was meticulously restored by Ron Lemke.

Yes, the memories come back at a vintage show. Most of them are good. The sit-in Raider Eagle reminded me of a trip to West Yellowstone where I drove a Raider for the first time. It was impressively stable, despite the narrow ski stance. The classic black Mercury with the rear-exiting exhaust proved that Yamaha was not the first to run an exhaust under the seat and out the back of the sled. The classic sleds feature their own industry innovations and serve to remind us that, though, they may be older, they can still teach us a few things about the sport and its history.

You might think that four-stroke technologies used by sled makers to lower emissions are a new phenomenon in the sport. But, that doesn’t take into consideration early efforts by Arctic Cat founder Edgar Hetteen, who hand-built a four-stroke prototype in the 1970s. Dave Guenther owns that sled and had it on display. Powered by an eight-horsepower Briggs & Stratton single cylinder engine, the sled was a forerunner to a series of Trail Cats produced in the 1970s. Of course, most of those were two-stroke powered, but they did push the idea of an independent trailing-arm front suspension. 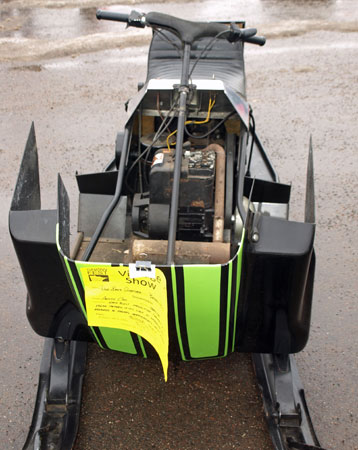 This is the original Trail Cat prototype that Arctic Cat founder Edgar Hetteen hand-built back in the 1970s. It features an 8-hp Brigs & Stratton single cylinder engine.

Vintage sled shows remind us where the sport has been. But it also allows us to share with fellow snowmobilers that special bond, the camaraderie of the snow that is unique to our kind. Ultimately the awards were dispersed. The winners acknowledged and applauded. And then we snowmobilers went back to chatting with new friends, reminiscing about our snowmobiling experiences and watching the snowmobile videos on the multiple screens at Muggs on Milles Lacs, home base to SNOWfest 2!