By any standards this is not a “fair” comparison, the 2010 Yamaha Phazer RTX is liquid-cooled and has 80 horsepower versus the lighter weight 2010 Ski-Doo MXZ TNT 550F with its fan-cooled, 57-hp motor. The price differential works against the Yamaha as it retails for a bit more than US$8,000 while the Ski-Doo sells for just under US$7,000.

We decided to compare the two because of a test ride day on the trails around Grand Lake, Colo. We had grabbed a Halloween-ish colored, black and orange Yamaha Phazer RTX and gone off with a group of snowmobile writers on other, more powerful models. Since the inception of the Yamaha Phazer we’ve wanted to love it. Every time we’ve tried to love it, we’ve come away disappointed. This ride would be a mixed bag.

As the group ventured off, we stayed at the back and paid the price rearmost riders always pay. There is the whiplash phenomenon that comes about as the leaders set a nearly constant pace and other riders fall back and then rush ahead to keep up. The rearmost riders find themselves amping up their speeds to stay in sight. They really amp up the speed if they are on slower mounts, such as an 80-hp Phazer. Even with an indicated 70 miles per hour flashing on the digital speedometer, the Phazer kept losing ground as the group climbed up the hillsides. At full throttle on bumpy corners the Phazer grew unhappy. It recoiled and bounced from front skis to snowflap. Smooth straights saw the horsepower disadvantage grow. 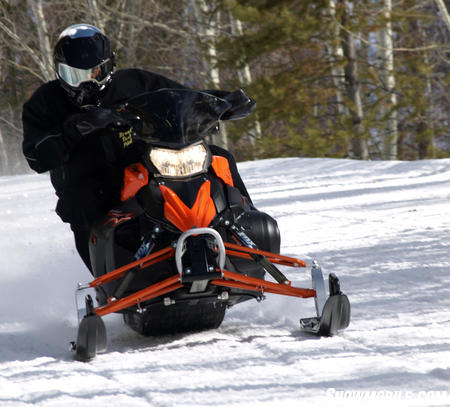 Finally, we caught up as the group stopped ahead. The rider immediately ahead of me said he hit 80-plus on the climb with an air-suspension Ski-Doo GSX 4-stroker. He was relaxed as he smiled, detailing the benefits of the adjust-on-the-fly air suspension system. We relaxed because we were stationary. There was no way the Phazer’s nifty 500cc, fuel-injected twin could keep up with sleds running a full 10 miles per hour faster.

After a brief request for a slower pace, the group was off and we began to climb and traverse tight trails on our way to an 11,000-foot pass near the trail’s summit. The Phazer tried but it suffered at the altitude, where engines lose about three percent of power per 1,000 feet of elevation.

Obviously unhappy with the climb and the pace, the sled put us in an unhappy place as we flogged it to keep up. Finally, on the descent we came to a fork in the trail. As that wise old Yankees baseball catcher Yogi Berra once said, “When you come to a fork in the road, take it.” As the main group veered right, we went left and set our own independent pace, one more akin to the Phazer’s performance. We stopped fighting the little Phazer. We found its pace and were immediately into a happier place on the ride down the mountain.

The “happy place” for this Yamaha on the Grand lake trail system seemed to be between 35 and 45 miles per hour. On reflection, that is still a pretty good pace for a lightweight, rough trail sport sled with diminished power. Figure that the Yamaha twin lost about a third of its potential at 11,000 feet, bringing it down the to same power level as a 57-hp Ski-Doo TNT at sea level. 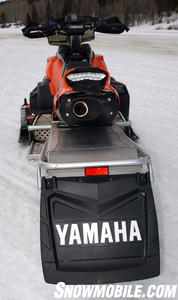 Yamaha runs the exhaust under the seat. 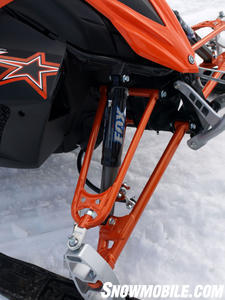 Our solo ride down the mountain helped us appreciate the architecture of the Phazer RTX. The sled went from being as ill mannered as a petulant teenager to being as active as an age-resisting senior. The front A-arm suspension settled in and gave the Fox Float shocks more time to set and react to the bumpy sections. The rear suspension stroked through its 16.2 inches of travel more smoothly and we felt inherently more in control. At the greater uphill speeds we had battled the sled’s every pitch and roll and worked to keep the skis aimed where we steered them.

We admire the cross-country racers who compete and win with Phazers in the Sport 85 class. Some suspension tuning and ski changes can transform the stocker into a winner. There’s proof of that in race results. As we finally found the Phazer RTX’ happy place, we too became happier. We began to see the Phazer for what it really is and not what we wanted it to be. We’ve expected it to be a winsome performer, one that we could simply whisk into a turn and have respond with racer precision. It can be fun to whip around on narrow trails, but it sits high and it will pitch, it will roll, it will lift a ski. You, we, have to accept that. It is not a low-slung racer. It sits tall. You sit taller in the narrow saddle.

And that was something that we proved to ourselves. Upon reaching the paddock area where the sled makers set out their various products for us to test ride, we traded the Phazer RTX for a 2010 Ski-Doo MXZ TNT 550F. It is night and day different coming off the Yamaha.

What we considered as lack of power from the high-revving Yamaha was Hemi-like when compared to the air-seeking Rotax fan motor. At sea level the Rotax fan motor can push the 411-lbs TNT chassis past 70 mph on smooth trails. In Grand Lake’s mountain air, the Ski-Doo had trouble hitting double nickels. At those speeds, like the Phazer, the TNT 550F was content, and its rider wished for more as the sled was low, light and much better behaved in the tight corners. There was no power for coming off the apex and you needed to keep the power on to keep up your pace for the straights. 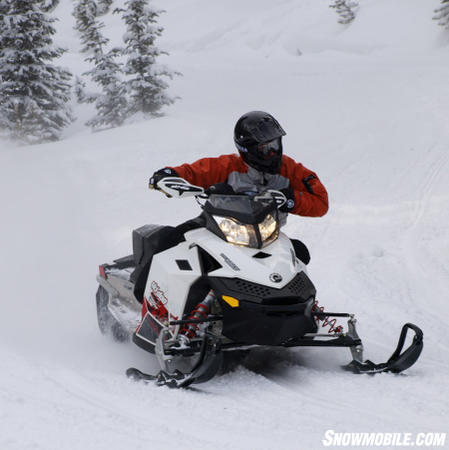 Even with a 78-lb weight handicap, the Phazer’s 20-plus horsepower advantage holds versus the lighter Ski-Doo. The power to weight ratio falls to the Phazer, which enjoys a ratio of 6.12 lbs/hp versus the TNT at 7.48 lbs/hp. It’s especially telling in the Colorado hills.

Overall, the Ski-Doo MXZ TNT 550F would be what veteran riders would prefer. It’s low and nimble, which we credit to mounting the Rotax fan motor in the latest REV-XP ride-forward chassis. It responds as you would expect a REV to respond. 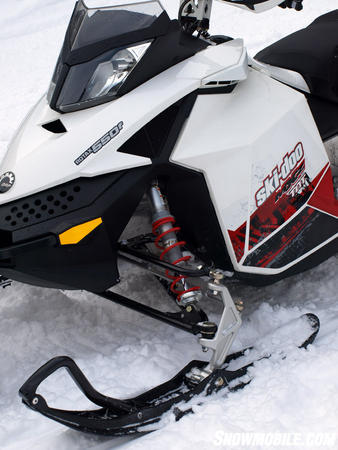 The little Yamaha is more dirt bike, which is deliberate. Yamaha engineers wanted a “flickable” dirt bike-like sled. It sits high and puts the rider high. As a Phazer rider, you need to become intimate with the sled, leaning off the seat to give the skis bite. Moving forward to push the suspension into the turn and sliding back to transfer weight off the skis for acceleration out of the turns. The Ski-Doo isn’t so fussy. It seems more intuitive but allows you to interact with it to tighten the turns by moving from side to side to set up for a trail’s corners.

Both sleds are fitting for new riders. The Ski-Doo TNT 550F can be pushed harder in a traditional snowmobile style while the Phazer RTX will respond better to a dirt bike rider’s moves. For the added thousand dollars in price, the Yamaha features a very high revving engine with greater power, electronic fuel injection, fancier shocks, and a very unique style. The REV-XP based fan-cooled TNT is more traditional and, while offering good shocks, doesn’t have the finer features of the Yamaha. The Rotax twin is carbureted with standard pull start, not the electric keystart standard with the 4-stroke Yamaha Phazer.

Ultimately, this is an apples and oranges comparison of two quite different snowmobiles. Now that we finally feel that we understand the Phazer, we can admit to liking them both for exactly what they are. Different but both fun on the trail.