Spring-like conditions in Elk River, Minn. forced organizers to pump some 3.5 million gallons of water through multiple snow-making machines onto the snocross track at Extreme Motorpark (ERX) to prepare for this weekend’s AMSOIL Championship Snocross Series.

Fortunately, the warm temperatures brought out race fans in droves and they got to watch the world’s best snocross racers do battle for two days. Robbie Malinoski topped the Pro Open class on Friday, while defending champion Tucker Hibbert took the checkers on Saturday.

While Minnesota homeboy Malinoski was light years faster than anyone at ERX on Friday, taking the checkers by a mile, the big news was the mechanical breakdown of Polaris’ Ross Martin – who was running a close second in the overall points to Tim Tremblay (Ski-Doo) heading into the race. 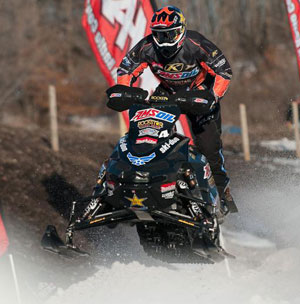 Robbie Malinoski ran away with the Pro Open win on Friday at ERX.

Pulling the massive 100-plus yard long Stud Boy Holeshot was Malinoski. In tight on Malinoski early was Martin, and racing well all weekend, Polaris’ Brett Bender, was right there in third. Several turns into the opening lap defending ACSS Pro Open champion Tucker Hibbert (Arctic Cat) managed to jar his safety tether loose, the third-straight week that’s happened to the champion. So having gone from seventh to fourth in a quarter lap, Hibbert was relegated to the very back of the Pro Open class field on the very first lap.

Moments after Hibbert’s problem an even bigger issue took place in terms of the overall Pro Open title chase. Martin slowed to a halt on the side of the track, got off his sled, ripped his goggles off and chucked them in disgust. A huge, though not fatal, blow dealt to Martin’s title hopes.

With six laps to go in the 14-lap main event Malinoski continued to put time on the field. Tremblay would get past Bender and Martin (by default) and moved up into second place, though Malinoski would continue to put time on the current Pro Open points leader though the checkers (8.8 seconds by race’s end). Bender would score his first podium of the year with a great day of racing and Hibbert would crash trying to catch up and ended up outside the top five.

“I live about 40 miles from here and consider ERX to be my home track,” says Malinoski. “Came out swinging in the final and my Ski-Doo was just a rocket ship off the starting line. The team really had an awesome setup tonight.”

“I’m so excited … it’s been a long time coming this year,” says Bender. “Dislocated my shoulder and all the other nonsense … feels so good to get up here. Hopefully I’ll be back up here tomorrow.”

Hibbert got back onto a familiar spot in the AMSOIL Championship Snocross Series when the defending Pro Open champ took the win after a thrilling race-long battle with Martin ended when Martin, running in first at the time, crashed trying to avoid some lapped riders. Hibbert and Martin’s battle put them so far in front of the rest of the pack – current points leader Tremblay included – that Martin was able to restart his sled and re-enter the race in second place. 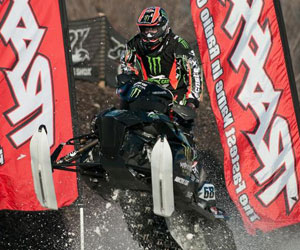 Pulling the Stud Boy Holeshot was Martin, which was followed by all sorts of carnage that send his teammate and Friday podium finisher Brett Bender off the track and Tremblay nearly tipped over. Caught up behind the mess was Hibbert, who started the opening lap outside the top five.

As things spread out and calmed down a bit Martin and Arctic Cat’s Cody Thomsen separated for just a bit, with Friday’s Pro Open winner – Malinoski – in hot pursuit. Hibbert was also flying, on a mission to make up spots – which he did to the tune of five racers passed in a little over a lap. Soon after Malinoski caught Thomsen for third, he wadded up his Ski-Doo and had to crawl from the wreckage off to the side of the track. DNF for the then second place overall points holder in the Pro Open class, a rough finish to what started with a win on Friday.

Malinoski’s crash allowed Tremblay to move up to fourth and he followed that up by passing Bender for third. But with some mechanical issues on his sled, masterfully addressed by his crew, Tremblay would get no closer to Hibbert and Martin – who were putting on a spectacular racing show up front.

Martin had Hibbert dead to rights in the rhythm section down the back stretch of the track, and used that to catch, pass and start to pull away from the champ. Then with two laps to go Martin went down and handed the lead back over to Hibbert, who ran it through to the checkers unchallenged. Martin would amazingly hold on to second with Tremblay rounding out the Pro Open podium on the final night at ERX.

“Just a bummer. I had such a good race going on, ” says Martin. “I think I might have been a little faster, but that’s how it goes.”

So as we head into the final two main events of ACSS racing, Tremblay enjoys a somewhat stable lead over Martin, 504-477. But in the sport of snocross that lead can evaporate with just one main event miscalculation. 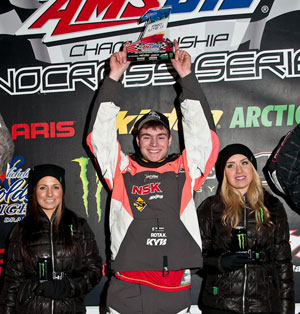 Kody Kamm’s multi-race Pro Lite winning streak came to a halt at ERX on Friday, though the Polaris racer still enjoys a sizable lead over Derek Ellis (Ski-Doo) in the overall points chase. Winning on Friday was Minnesota’s own Travis Muller (Ski-Doo), recording his first win of the season in a thrilling come-from-behind race in which he beat Polaris’ Jake Scott to the finish line by 3/10ths of a second.

Kamm railed out to the early lead and, much like he has the past three races, looked to be in line to check out. But a mistake on the back rhythm section would send Kamm off the track – and glancing off a telephone pole. Fortunately the points leader was uninjured and his was still running so he was able to rejoin the race, dropping back outside the top five.

Bombing through traffic up towards the front, right around the time Kamm exited the track, was Muller – who took the lead from Kamm and was never challenged through the checkers. Scott and Ellis would battle hard during the mid laps of the nine-lap contest before passing Ellis and making it stick.

Kamm came ripping back with a vengeance after a couple wipeouts on Friday night relegated him outside the top five – and laid the smack down on the rest of the Pro Lite field at ERX on Saturday. Kamm won by nearly five seconds over second place Colby Crapo (Polaris), with Ellis placing third – and was the only Pro Lite racer to podium both nights at ERX.

Pulling the holeshot was Polaris’ Matt Bristow, towing Arctic Cat’s Matt Pichner and Crapo through the first turn, while Kamm got out in about fifth. By lap three Kamm had disposed of Crapo and Pichner to move into second, then set up Pichner with a thrilling mid-track triple jump out of a corner – an area where all the other racers were doubling.

Midway through the nine-lap contest Friday’s winner Muller went down, dashing his chances at a return to the Pro Lite podium. With four laps to go Kamm was in complete control, Crapo holding on strong to second and Bristow in third. Ellis brought the crowd to its feet with a pass on Bristow with two laps to go – which he’d make stick through the checkers.