It looks like Tucker Hibbert isn’t unbeatable after all. At the AMSOIL Championship Snocross Series Vision KIA Eastern Nationals at Finger Lakes Casino and Racetrack, Polaris pilot Ross Martin took the checkered flag in Pro Super Stock. Hibbert, however, righted the ship as he bested Martin in the Pro Open final.

In the Pro Super Stock final on Friday, Feb. 4 it was Arctic Cat’s Dan Ebert who earned the holeshot and took the early lead. Martin, though, fought through some heavy traffic and started to put some pressure on Ebert in the early laps, while Garth Kaufman (Arctic Cat) settled into third.

Hibbert, who came into the event unbeaten all season, did not look his usually dominant self. After qualifying in seventh, the Team Arctic rider was stuck in the middle of the pack on the opening lap. To his credit he quickly worked his way to fourth, before falling off and dropping near the back of the field. 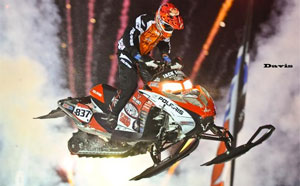 Martin fought his way past Ebert and into the lead about a third of the way through the final. It was a lead Martin would never relinquish. Kaufman and Tim Tremblay (Ski-Doo) also got past Ebert and finished second and third respectively.

Fourth place went to Ebert, while Hibbert used a late charge to claim fifth and salvage some valuable championship points. Martin is now tied with Hibbert in the title chase, with Tremblay only 20 points out.

In Saturday’s Pro Open final it was looking for a time like Martin would pick up another victory.

Martin, Hibbert and Robbie Malinoski (Ski-Doo) lead the parade on the opening lap with Tremblay and Ebert in tow. Early into the race Hibbert pressured Martin while Tremblay, the fastest man on the track, moved to within a few sled lengths of the leaders.

With 14 laps to go Hibbert moved alongside Martin, but had to back down for a local yellow flag. In the next corner, he made the pass stick and set sail. On the next lap Tremblay made his way into second and looked to have the speed to catch Hibbert.

The running order remained the same for the next several laps then, with four to go, the wheels fell off. Hibbert made an off-track excursion all on his own, allowing Tremblay to close in and pass the Arctic Cat rider momentarily. Tremblay then suffered a mechanical failure approaching the finish line jump and was parked. Martin closed briefly before Hibbert regained stride, while Malinoski claimed third. At the finish, it was Hibbert, Martin and Malinoski, with Logan Christian (Arctic Cat) turning in a great performance for fourth and teammate Kaufman completing a strong weekend in fifth.

Kaven Benoit (Ski-Doo) patiently waited out the chaotic first lap of the Air Force Semi Pro #1 final, before seizing the opportunity to score his first national win in ACSS competition.

Benoit watched as early race leaders Darren Mees (Ski-Doo) and Cody Thomsen (Arctic Cat) tangled on the first lap then moved on to lead the remaining circuits. Derek Ellis (Ski-Doo) also benefited from the mishap and worked his way into second. He would stay within sight of Benoit until the final corner, where Thomsen made his way by to get the second step on the podium. Mees would rebound for fourth overall.

Thomsen did himself one better in the Air Force Semi Pro #2 final, but it didn’t come without some drama. He survived a first lap melee and raced to a dominating victory. The carnage in the second corner of the opening lap claimed top qualifiers Mees and Kyle Pallin (Arctic Cat), as well as Ellis and Colby Crapo (Polaris).

As Thomsen worked a clear track, Mike Bauer (Polaris) gave chase with East Coast Snocross regular Lincoln Lemieux (Ski-Doo) in third. Lemieux would get by Bauer for second in the closing stages, while Benoit, who had to race his way in through the last chance qualifier, put in another strong run coming from deep in the field to finish fourth.

Sportech rider Andrew Carlson (Arctic Cat) turned in the strongest performance of his rookie season as a semi-pro, avoiding the early traffic and scoring a well-deserved fifth.

The next stop for the ISOC National Series is the Feb. 12 Motown National, which will be held at the Silverdome in Pontiac, Mich.