Snocross fans flocked to the LCO Casino and Convention Center in Hayward, Wis. to bask in the warm spring-like weather and watch the world’s best snocross racers compete in Round 8 of the AMSOIL Championship Snocross Series, March 5 – 7.

Sunday’s Pro Open final saw the fans on their feet from the green to the checkered. Getting started proved to be a bit more challenging for several riders as they barely made it out of the hole shot when Paul Bauerly (Arctic Cat), Garth Kaufman (Arctic Cat) and Steve Taylor (Ski-Doo) tangled in turn one setting them all back to mid-pack. Emerging from the carnage unscathed Dan Ebert (Arctic Cat), Ross Martin (Polaris), and Zach Pattyn (Arctic Cat) took the top three lead positions after the first lap of the grueling 24-lap race. 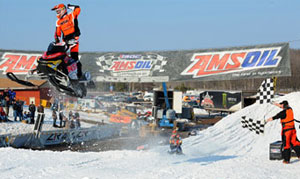 The battle erupted and Tremblay flew seemingly out of nowhere to get between Martin and Ebert. He put the throttle down and took over the lead position.

Behind Tremblay the racers were battling for every move. Martin got around Ebert taking second for a lap or two when Pattyn poured on the steam bumping Ebert down a position for nearly half the race. With about eight laps to go, Launchin Levi LaVallee was tripling jumps catching big air moving him up with every jump. In the turn #2 LeVallee snuck under Pattyn to put himself in the third-place position.

“Everyone was picking good lines it seemed. It was a really fun race,” says LaVallee. “I just started finding my own good lines and picking people off left and right and ripping it up.”

At the podium the top three were all smiles as they stood with Tremblay in first, Martin in second and LaVallee in third.

Martin’s second place finish was enough for him to clinch the Pro Open championship. He holds an 80-point lead over LaVallee heading into the final event of the season. Tremblay is only 17 points behind LaVallee.

“I am just going to go out there and really have some fun,” Martin says about the season finale at Lake Geneva, Wis., which runs March 19-21.

Unlike the Pro Open, the battle for the Pro Super Stock championship is still very much up for grabs. Tremblay went into the Hayward race holding a 28-point lead over Martin. That lead would shrink as Martin bested the field to take the checkers.

Tremblay, however, limited the damage by finishing second, followed by Ski-Doo teammate Emil Ohman in third.

Martin held an eight-second lead over the rest of the pack for nearly the entire 24-lap race. Lap times were tight all across the field with battles for position changing rapidly over the chewed up track. Martin chose his lines well and concentrated knowing Tremblay was looking to make a move. Even with a big lead, he knew he couldn’t make any costly mistakes.

His strategy worked well for him making it look effortless as he flew across the finish line at the checkered flag. Heading into the season finale, Tremblay holds a 23-point edge over Martin with 49 points up for grabs.

The Arctiva Semi Pro Open was perhaps the most intense race of the weekend with riders flying high over jumps and off the field. Before the end of the first lap, Darrin Mees (Ski-Doo) fell off his machine in mid-air with the sled going over the edge of turn 4 and Mees going off the opposite side of the track. He had the wind knocked out of him, but he was okay. Logan Christian (Arctic Cat) held a good position but luck was not on his side as he flew off his sled in the same turn a lap later pushing him to the back of the pack with a broken shock.

The carnage on the field set up the biting action for the remainder of the race. Justin Broberg (Ski-Doo) got out in front and chose good lines putting him in the first-place position at the podium and another win for the Warnert Racing Team.

“I need every podium I can get now,” says Broberg. “This is a good win for me.”

Broberg is now trailing points leader Cody Thomsen (Arctic Cat) by just eight points with on race to go. Thomsen found himself in the third-place position on the podium and Matt Pichner (Arctic Cat) took the second.

In the Track Inc. Semi Pro Super Stock #1 it was Colby Crapo (Polaris) in first followed by Kyle Pallin (Arctic Cat) in second and Andrew Lieders (Polaris) in third.