Switching out a stock track for the Cobra adds tremendous traction

The 2008 Ski-Doo MX Z TNT 500SS just wasn’t hooking up in hard pack. I had spent many miles slipping and sliding aboard this sled and yearning for better trail traction. Something had to be done because the stock one-inch Camoplast RipSaw track wasn’t cutting it — literally and metaphorically.

I considered a similar RipSaw or HackSaw track with 1.25-inch tall traction lug because, in the real world, the extra ¼-inch does make a huge difference in traction and performance. But I also wanted a track that would provide far greater performance on loose snow and in off trail conditions. Fortunately, in this day and age, there is a wide range of tracks with different lug heights, lug patterns, rubber hardness (durometer), open window, closed window, fully clipped or partially clipped. The number of different design aspects can be mind numbing. 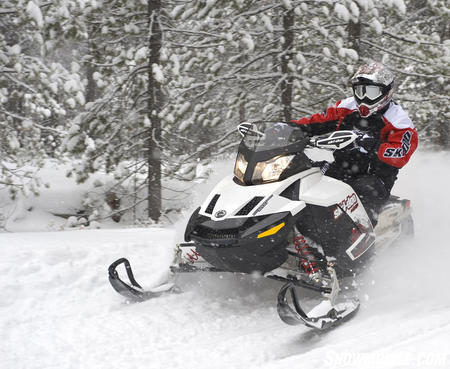 A good all-around track option, the RipSaw track with one-inch lug height is standard fare on many stock models like this 2010 Ski-Doo TNT. 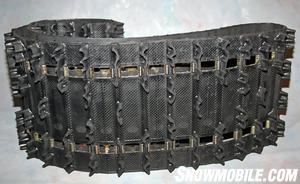 The fully clipped single-ply Cobra 1.352-inch track for the Ski-Doo XP 120-inch tips the scales at a nominal 33 lbs.

After reviewing the current offerings on the market, I selected the single-ply Camoplast Cobra for the Ski-Doo XP short track sleds — Part No. 9092H. The 15 x 120-inch track features 1.352-inch tall lugs for far better penetration than the sled’s stock RipSaw track. The Cobra is much closer to a 1.25-inch track because the lug fingers may measure 1.352-inches but the rest of the lug measures 1.25 inches. The new Ski-Doo XP short track sleds have a large window and 2.86-inch pitch rather than industry standard 2.52-inch pitch. Therefore, the track length measures 120 inches, instead of 121 inches, which is a common length for short track trail sleds.

The open window, fully clipped Cobra weighs 33 pounds as Camoplast claims. Only three pounds more than the one-inch RipSaw, the Cobra option is a pretty modest weight gain when you consider the Cobra lug provides ¼-inch increase in surface area and lug fingers measure .352 inches high. The Cobra is constructed with a single ply of fabric and a layer of high-tensile strength cord surrounded by vulcanized rubber. According to Tony Vruwink of Tracks USA in Lake Lillian, Minnesota, single-ply tracks are typically a little thicker than most double-ply tracks because more rubber is molded around the single ply for greater strength. Since a single-ply mat is thinner and lighter than other double ply tracks, rolling resistance and internal friction are reduced. The Cobra shows the aggressive cup traction lugs that provide phenomenal traction in a variety of conditions.

The Cobra’s lug design is substantially different too. While the RipSaw features an angular finger lug design, the Cobra has a cupped rubber design with round support fingers. But there are a number of other crucial differences. Where the Cobra is fully clipped, the RipSaw has clips every other window. However, the durometer of the rubber, which plays a significant role in the performance of a track, is 80 for both RipSaw and Cobra. Durometers range from 50 (very soft) to 80 (very stiff). Yet, curiously, you easily can move or deflect the Cobra’s lug by hand while the shorter lug RipSaw feels much stiffer to the touch. After installing the track, I wondered how this pliable track would perform in hard pack and icy conditions. Well, I soon found out.

Riding more than 1,000 miles with the stock one-inch RipSaw on the TNT, I experienced excessive track spin in a variety of conditions. And although I felt the one-inch RipSaw delivered lackluster performance, a number of riders have reported exceptional trail performance with the 1.25-inch RipSaw. The stock RipSaw supplied good traction in soft trail conditions with warmer temperatures, but as the temperatures dropped and the snow became firmer, the track’s lug penetration diminished and it struggled to hook up. Keep in mind, you cannot attribute traction problems solely to the track. You also need to have the correct suspension setup for the conditions. My TNT had a balanced set up with the right amount of ski pressure and track pressure. I didn’t want to loosen preload on the center shock or let out the limiter straps to place more pressure on the track and have reduced ski pressure as that would result in a front end push or understeer condition.

A close up view of traction lug shows the cupped design. The support fingers are the highest point of the lug at 1.352 inches while the rest of the lug measures 1.25 inches.

With about five hours time and the help of a friend, I switched out the RipSaw for the Cobra. With the conversion completed, I headed north to put the track through a battery of tests in and around Ely, Minn., which has a wondrous variety of lakes, tight woods trails, rail road bed trails and off trail riding. Temperatures ranged from -15 below in the mornings to +10 above in afternoons. With about two inches of loose snow on top of the hard pack base, the Cobra revealed its loose snow trail handling characteristics. The track’s 1.352-inch lug height and cupped lug design provided superb grip and penetration. Rather than fishtailing under acceleration, the track clawed its way down the trail. Straightline acceleration as well as braking performance had improved by leaps and bounds over the stock RipSaw. I was able to brake far deeper into the corners and drive out of the corners considerably faster.

No longer was I drifting, sliding or spinning in most conditions and through many corners. The Cobra inspired confidence. The track had transformed the handling of the sled and gave me peace of mind that I had a high level of traction for pushing the edge of the performance envelope. As a result, the turn-in capability significantly improved. I could select a line and the track followed without protesting by squirming or stepping out. Also, the improved traction dramatically raised the threshold of track lockup, giving me a wider range of braking performance, which is always a good thing. In the middle or apex of the corner, the back felt firmly planted as I dialed on the power. In technical trail sections, the track shined with sure-footed performance, responding to the smallest throttle, brake and steering inputs. Best of all, I didn’t have to worry about the track snapping out if I hit an icy patch. And when I had to ride the berm (you know, from sleds throwing snow from the inside to the outside of the corners), it responded with a steady supply of grip. 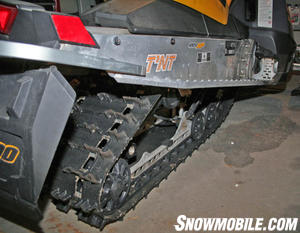 On hard pack trail conditions in subzero conditions, the track continued to impress, delivering traction from clutch engagement to shift out. I could push the sled faster into the corners and out of the corners than the stock track. It was only in certain icy conditions, when I was riding very aggressively that the Cobra would slightly break traction, but I had to push it hard to do so. And when the track did twitch or break loose a bit, it was very gradual and predictable.

Although I was unable to find fresh powder during the track test, I did venture off trail where the Cobra demonstrated vastly improved traction and flotation. It allowed more freedom to explore areas and negotiate heavily wooded terrain because I didn’t have to worry about getting stuck if I didn’t maintain momentum. With the Cobra, I could ride slow and stop in a variety of situations and the track would pull from bottom end, climb on top of the snow and plane out.

For my riding style and Midwest terrain, the Cobra performed admirably in every riding condition, and everything I threw at it. I had attained a much higher level of acceleration, handling, and control. While it provided exceptional off-trail traction, it didn’t sacrifice on-trail performance. Although I wasn’t able to confirm an improvement in top speed because I had made a clutching change that was different than the stock setup, I estimate that the top speed was close to the stock one-inch RipSaw. According to Vruwink, who put around 2,000 miles on a two-ply Cobra, “Yes, it [the Cobra] did have a slight high speed advantage over the RipSaw.”

For more information about this track or other track options visit TracksUSA.com.