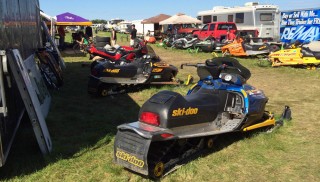 If you wanted to feel old, you could step onto the Hay Days property in Sunrise Township. Born and bred in metropolitan Minnesota, just north of the state capital of St. Paul, Hay Days turned 50 years old this season. It is the harbinger of the snowmobile season; frequently referred to as the “unofficial beginning of winter.”

Hay Days’ 50th anniversary celebrated itself as the “World’s Biggest Snowmobile Event.” We won’t quibble. From its baby days as strictly a snowmobile grass drag event, Hay Days under the guidance of the Sno Barons snowmobile club has become a vast weekend snowmobile extravaganza. It is where all the current snowmobile manufacturers show off their latest technologies, introduce brand new race sleds, showcase concepts and such. Aftermarket performance makers, parts and apparel suppliers abound, offering special deals to early bird snowmobilers who number in the tens of thousands on the busy Saturday opener.

Officially Hay Days is a two-day weekend event. Unofficially it could easily qualify as a three-day and more show. The major manufacturers who purchase display areas that house their factory race and show trailers set nose to tail have people setting up displays days in advance of the weekend. Some executives may be on hand to oversee the set up on Friday, but all the key executives are on hand for the Saturday opener. That is the big day. 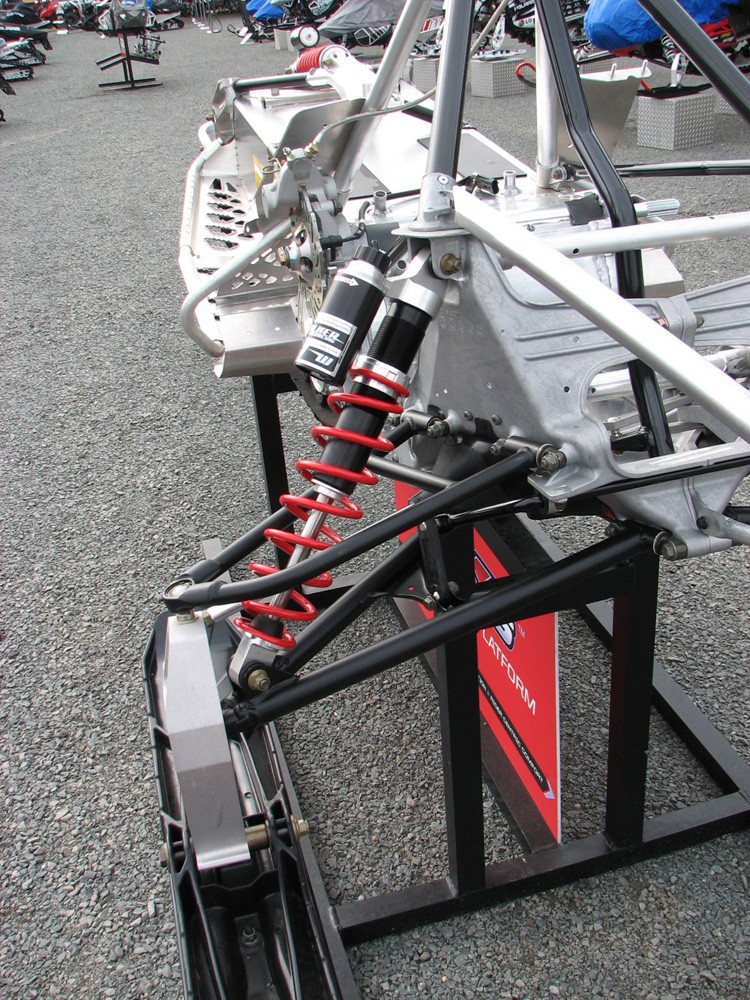 When we arrived Friday afternoon to help a friend set up his booth, this 50th edition of Hay Days was nearly in full swing. Row upon row of swappers had grabbed the best spots. They came with pickup trucks and RVs pulling single, dual and quad trailers laden with everything from gently used sleds to rusty junk. What passed as rusty junk, though, could be a treasure to the right swapper or collector. With no IRS agents on hand, the event relies on a mass transference of cash, some checks and little credit card business. As with any auction-like event, serious snowmobile swappers have mental lists of what they want to buy, but are ready to make bids on things they weren’t expecting to find.

By late Saturday afternoon the good stuff will have been picked over and Hay Days staffers will have helped the buyers load bulky purchases like sleds, tracks and engines on to courtesy trailers and haul the items to the buyer’s vehicle. While Saturday is “the” day the swap opens, Friday has become the early bird day as fellow swappers do their shopping. Once the early arrival swappers and vendor workers have gotten set up and claimed their space, many walk the rows of the swap and watch as fellow swappers enter the grounds. It’s a time to check out who’s got what and where they parked.

Friday proves interesting. Very little is open, officially, although some food vendors set up to provide on-site options for these early birds. If a swapper walks into one of the many clothing outlets as it sets about laying out its noncurrent and new inventory, they may find an early bargain to lock up in their truck. Negotiations among the swappers starts as soon as one swapper sees another swapper’s trailer carrying something he “needs.” As Sno Barons’ Tony Rutherford states, “Having the largest snowmobile swap in the world also provides access to rare finds and rarely seen antique sleds.” 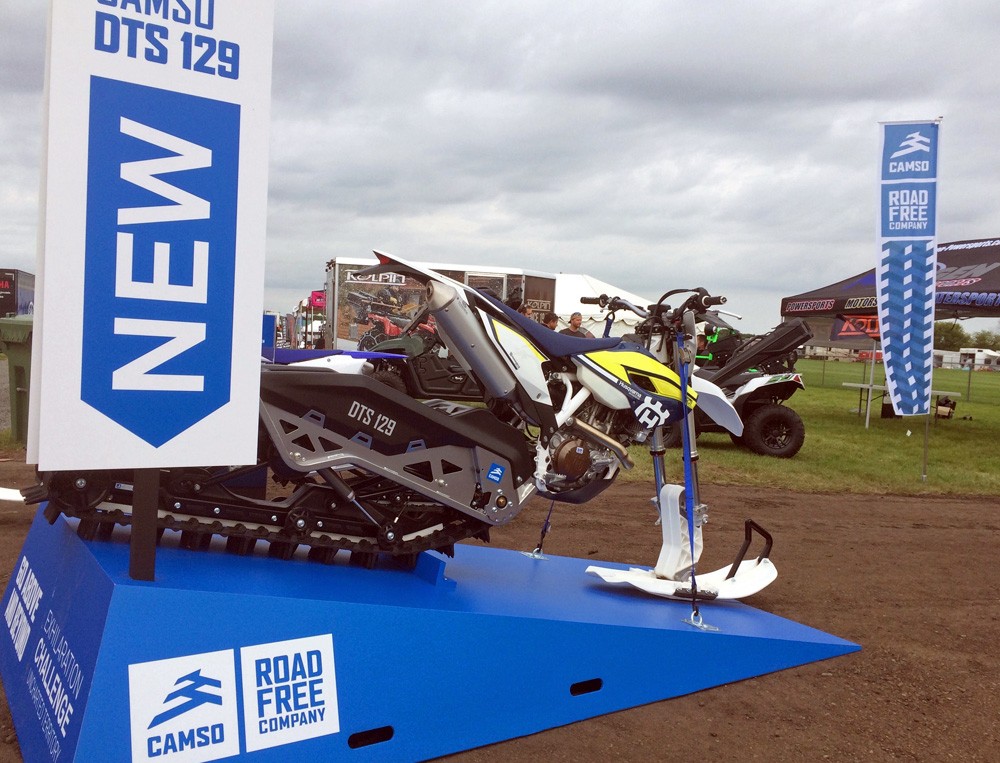 Hay Days is about new products on display like the new Camso DTS 129 snowbike concept.

Hay Days is an interesting place. This 50th edition resembles a mix of Barnum & Bailey showmanship with daredevil snowmobile and ATV riders performing “do not try this at home” stunts combined with a gigantic swap area and the tent village of a renaissance-like event. Attractive women hired to walk the grounds in attention-getting brand-identified apparel entice a predominantly male assemblage to visit their sponsors’ booths. Balloons of various shapes such as spark plugs or traction products rising over the grounds serve as sky markers to draw shoppers to the sponsor’s display. New sleds sit on custom stands with their key technology such as clutches, engines or suspensions nuancing their uniqueness. This is big business.

Snowmobilers would come no matter, but to make this 50th anniversary event special, Sno Barons President Beckie Zweig notes the presence of a large walk-through display of Hay Days history from its start as a November 1967 drag race held in small town Andover to a final move to its permanent home in Sunrise Township. Early Saturday attendees were given special “goodie” bags. A new saloon area was added near the food court, along with special events like a highly anticipated distance jump by Red Bull’s Levi LaVallee.

Every day at Hay Days is busy starting with pre-weekend set up for the major vendors, manufacturers and concessionaires. While Fridays may be set aside for set up, Hay Days commerce gets started early. 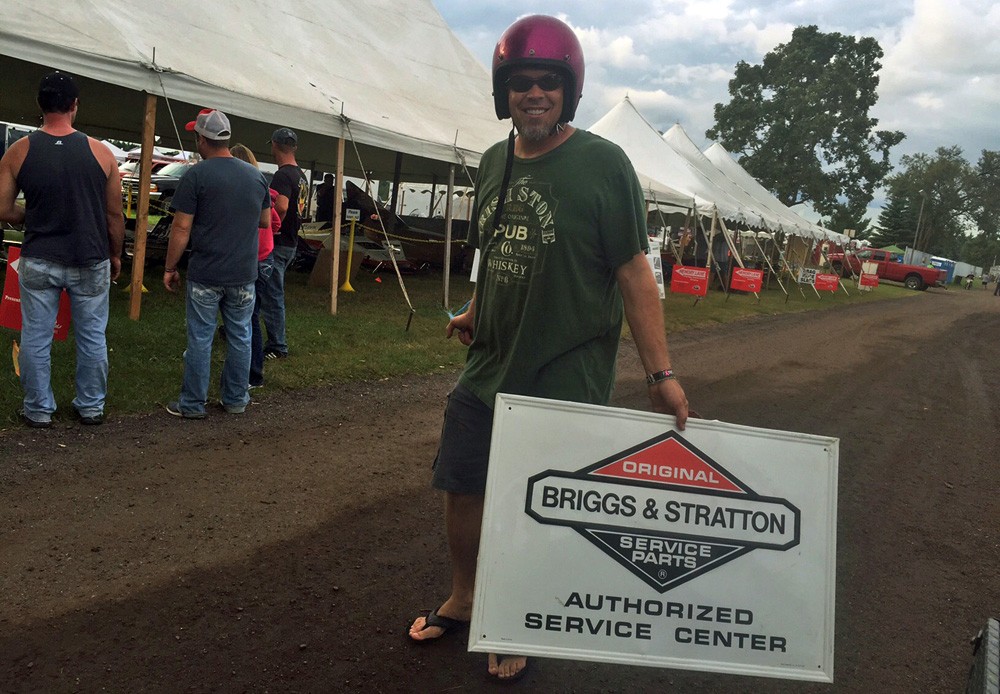 Hay Days is finding a treasure with meaning. (Photo by Joel Mellenthin)

Exploring the grounds from a golf cart on Friday afternoon allowed us the freedom to chat with various snowmobile folks and the chance to view key displays without elbowing fellow snowmobilers anxious to get a close look at the newest gear. We cruised the many lanes of the assembled swap, checking out relics of past snowmobile history. There was a Quadtrac snow vehicle with a set of four independent rusty cleated tracks. The vehicle was developed by Arctic Cat in the late 1970s and was intended to provide trail grooming opportunities to clubs, associations and other groups such as ski clubs who could use it to set ski tracks. Like many of the relics found at Hay Days’ swap area, the Quadtrac played a role in the sport’s past.

We saw a pair of swappers pushing a Briggs & Stratton powered mini-bike, one proudly carried a Briggs & Stratton dealer sign. As these early swappers indicated, it’s not all snowmobiles at Hay Days, but it is snowmobile and Hay Days history. Because the major snowmobile companies also manufacture wheeled products, they and Hay Days event staff have incorporated them into the venue’s weekend activities with free demonstration rides of the latest ATV and side-by-side vehicles. Hay Days has evolved over its 50 years and, we expect, will continue to do so on its way to a 100th anniversary. 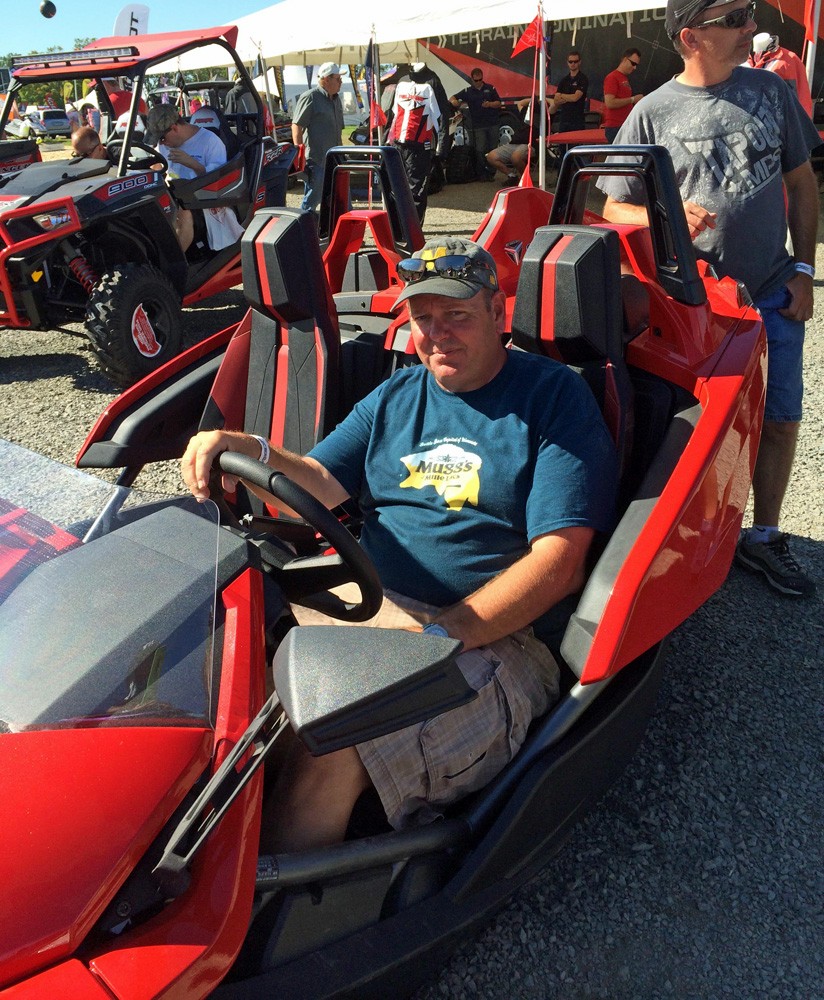 Hay Days is about fantasy. For snowmobile athlete and test rider Steve Dubbs it what would it be fantasizing how it would be to own and drive a Polaris Slingshot.

The fundamental purpose of the Sno Barons Hay Days event remains. The major money maker for the suburban snowmobile club, Hay Days monies continue to be fed back into the sport. “While the metro based Sno Barons may no longer have trails of our own,” explains Sno Barons’ Zweig, “supporting the clubs that do is what we strive to do.”