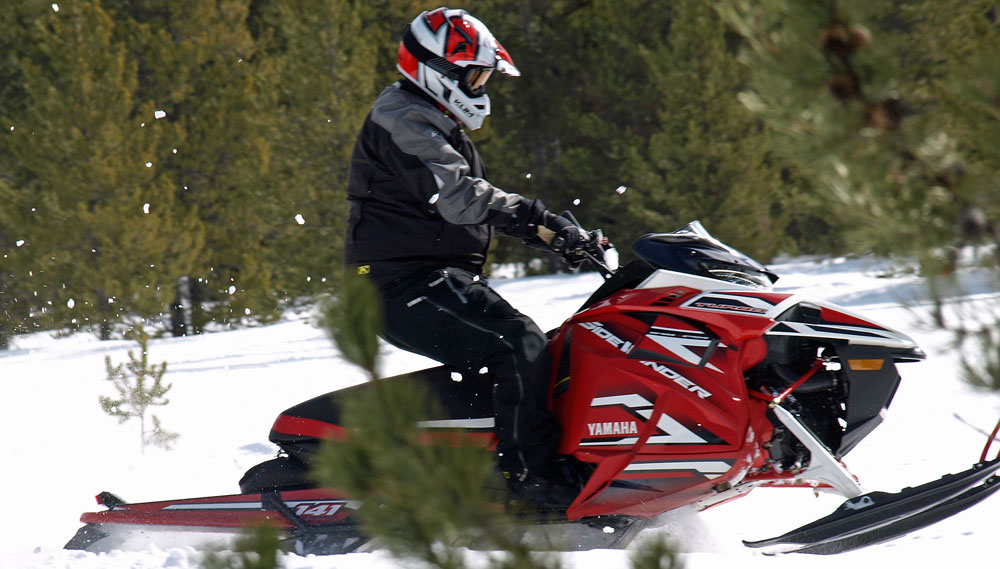 Oh, yeah! Yamaha really does get it. And with its Arctic Cat partnership, Yamaha delivers a rev happy power boosted drivetrain to easily spin a 141-inch long Camoplast Power Claw 2.25-inch lugged track to get you into those high plains drifts. Or as high as you want the all new 998cc Yamaha Genesis Turbo’s 180 horses to take you.

Finally, Yamaha owns bragging rights to b-i-g power that runs strong from drive off to wide open throttle bodies at top end — wherever over 100 MPH that might be. This is the sled we hoped Yamaha could deliver. All 2017 Yamaha sleds carrying the new turbo bear the name Sidewinder and combine Arctic Cat suspensions, body works and chassis with Yamaha’s all-new three-cylinder turbo. Supposedly the engine project actually predates the Cat/Yamaha hook-up. Of course, both parties claim major collaborative involvement, which we suspect is true as Cat needed to adjust its platform and engine area to accommodate the inline triple. Yamaha needed to refine the engine and its proprietary Yamaha drive and driven clutches. The two companies suggest a 50-50 engineering partnership, with Yamaha in charge of the engine package, although Arctic Cat kept another partnership alive by leaning on Team Industries to assist with clutching the Cat’s turbo version. Regardless of the specifics, the new Yamaha Sidewinder (pick one) is impressive right from the moment you twist the starter key. 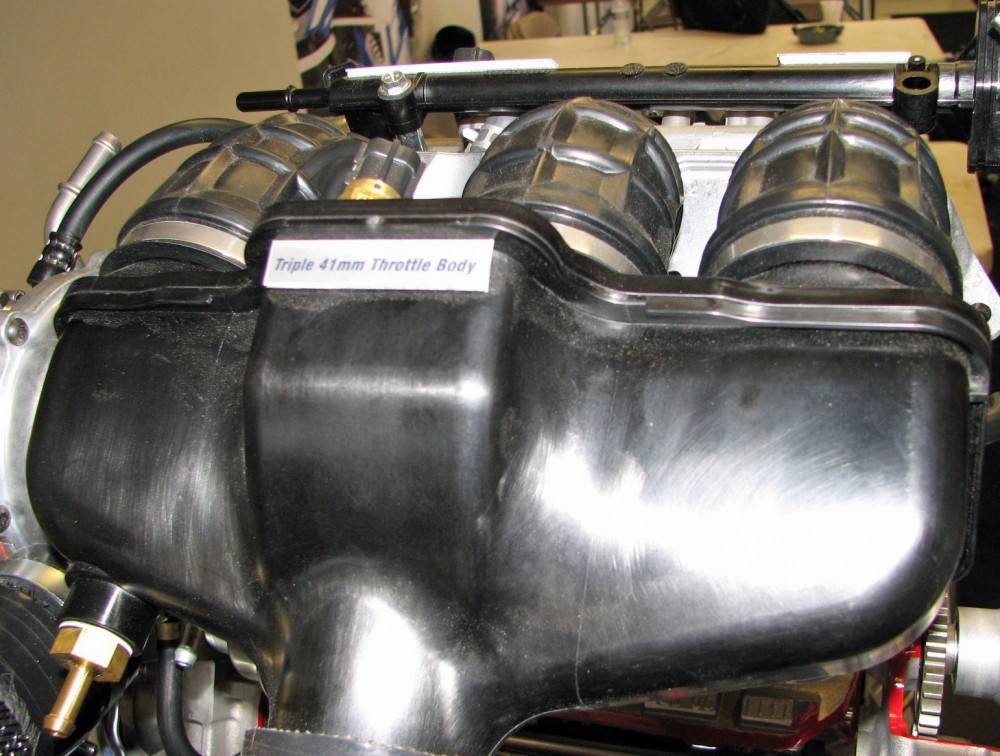 In order to get quicker response and smoother power, Yamaha opted to turbocharge via three 41mm throttle bodies.

The turbo power comes on sneaky smooth. There isn’t any arm-yanking insult, just pure smoothness that quickly will take the unwary from a 45 miles per hour jaunt up 25-35 mph faster by simply easing in the throttle lever. Most riders won’t be that patient, they’ll slam the throttle to the bar and be rewarded with instantaneous track spin, front end lift and the appearance of triple digits flashing on the speedometer. Did we mention that the new turbo is quiet, seemingly sedate but impressively quick and oh-my-lord fast? 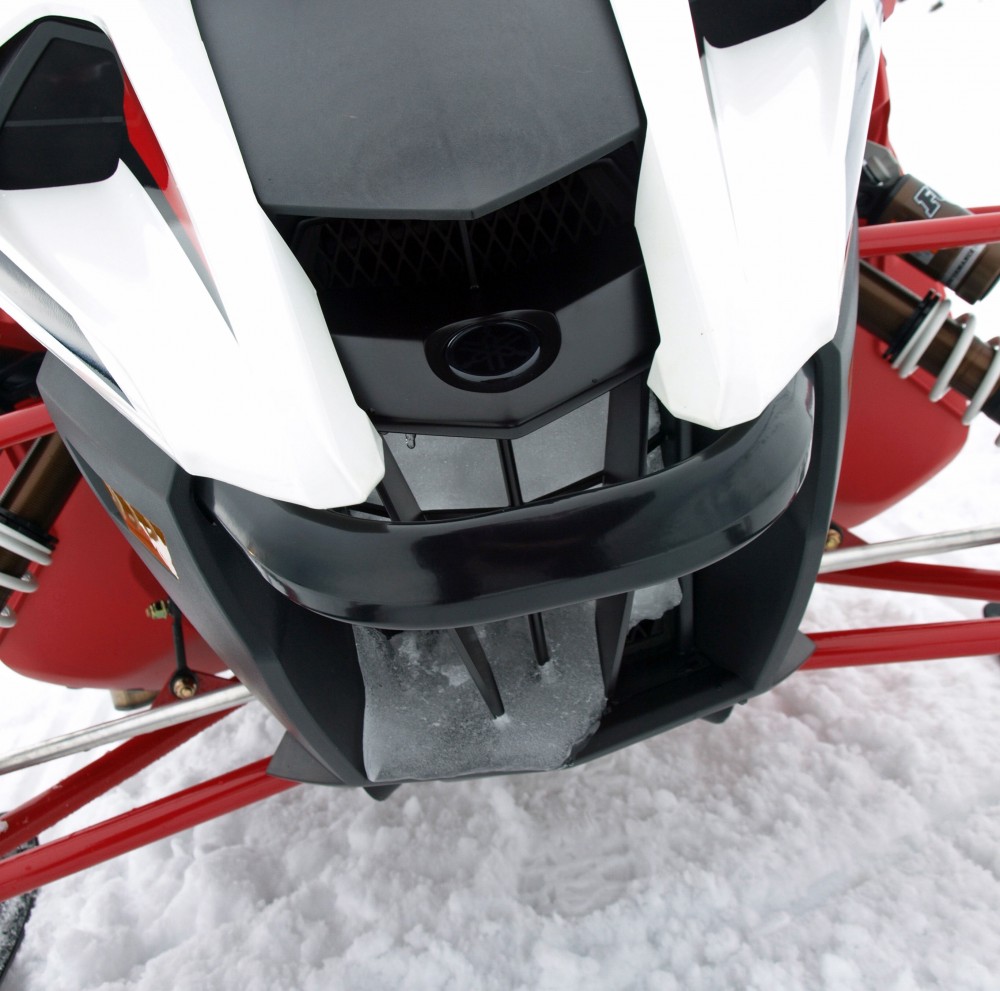 We feel that the Sidewinders are actually quieter than the normally aspirated 1049cc Yamaha Vipers. Unlike Arctic Cat’s turbocharged Suzuki twins or the nearly forgotten Polaris 750cc turbo, the Yamaha Sidewinder doesn’t telegraph its turbo-ness with hissing or a noisy poppet valve bypass when going off throttle. Heck, the Yamaha is car-like in manners, emissions and quietness. Do you really think Ford would sell a fleet of Eco-Boost cars and trucks if they had poppet valves that whistled down the road? Do you ever think about turbo sounds emanating from Chevrolet’s Cruze 1.4 turbo? Not likely and once you get a few weeks and a few hundred miles on a new Sidewinder, you’ll forget it’s a turbo and ride it like the high performance snowmobile that it is. 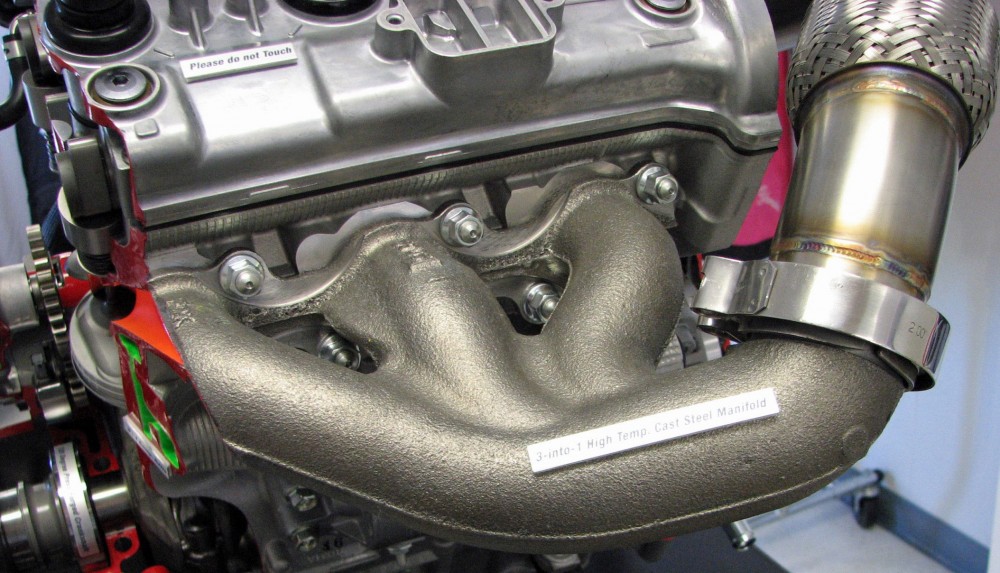 Yamaha created a special cast steel 3-into-1 steel manifold to provide durability when directing exhaust gases to the turbo.

This is a high performance sled. With Cat’s help, Yamaha scored sales with its Viper models, which attacked the “600” class. The Cat-platform 180-hp Sidewinder, with nearly as many 2017 models as the existing Viper, should easily crush the 800 class where most of its competitors carry 800cc two-cycle twins with 150 to 160 horsepower. The two-stroke competition may be lighter in overall weight, but the Sidewinder will have equal or better — most likely — power-to-weight against virtually all comers. 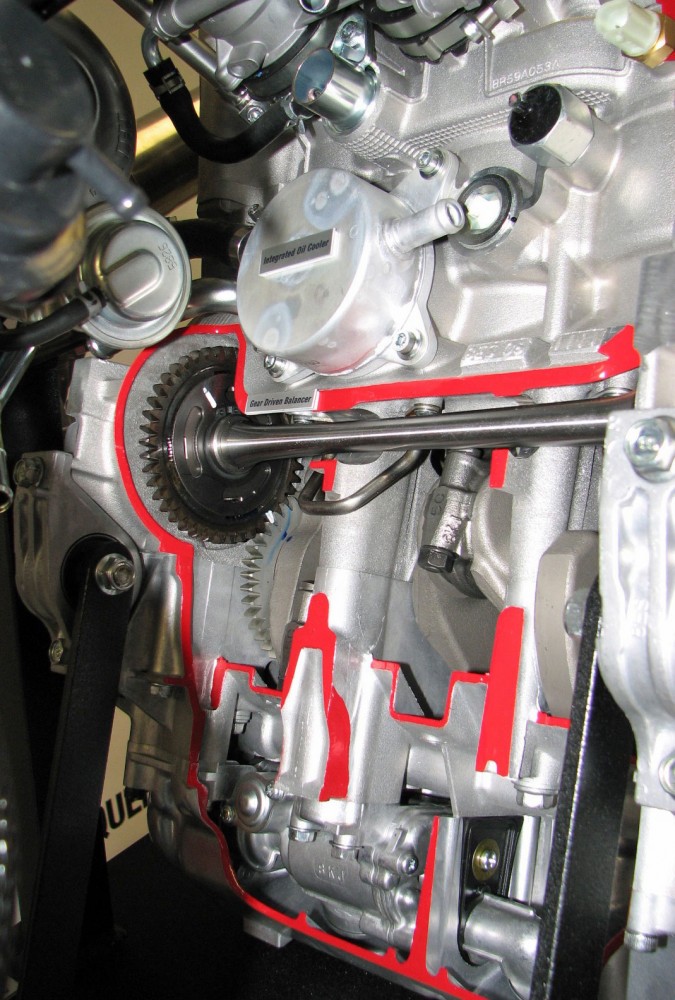 Interestingly, snowmobile manufacturers tend to be a tad conservative when introducing new models, especially ones with entirely new drive trains. Look at Ski-Doo. That company has an all new Rotax 850cc twin, but is limiting it to just a few Summit, MXZ and Renegade models with early season buyer options, and even fewer versions for all-season availability. Yamaha installed the new turbo in a dozen 2017 versions, with partner Arctic Cat offering a similar amount of new turbo Cats. For virtually every Viper model there is a commensurate Sidewinder. Of course, as with Ski-Doo, some of these Sidewinders are limited edition Spring Power Surge versions like the Sidewinder X-TX 141 LE.

Offered in a choice of Yamaha Blue or Heat Red with white, the Sidewinder X-TX 141 LE carries a US$900 higher price tag than the SE version but offers extra value with a top of the line Fox Float Evol shock package, special graphics, a 2.25-inch lug Power Claw track, heated seat and Yamaha’s new mountain style ski. Usually we don’t figure that plopping cash down on a sled in the preseason is all that necessary, but in recent years the sled makers really have created added value that you couldn’t make up by buying the in-season version and adding the optional pre-season “value” components. That’s the case here, especially if you are a serious off trail runner. 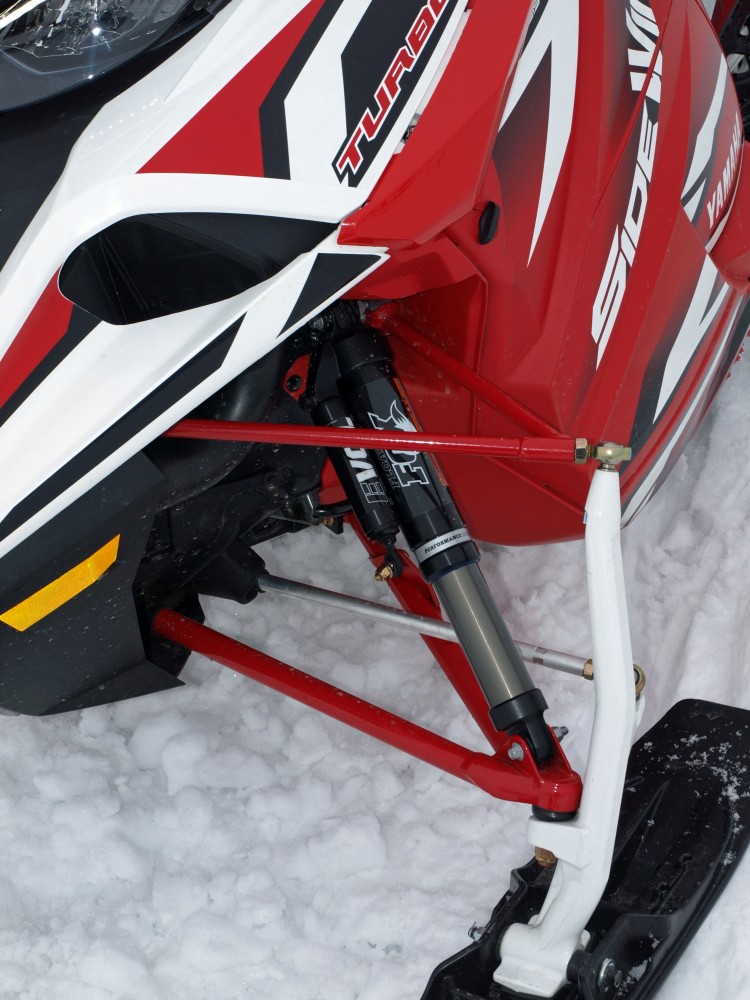 Fox Evol 3 air shocks are used to control the 7-inches of front suspension on the X-TX LE.

The shock upgrade to Fox Float 3 Evol on the double A-arm front suspension and use of Fox Float Evol and Evol R on the rear suspension control arms should be well worth it. The use of Yamaha’s redesigned and proprietary mountain ski adds value as well as narrowing the ski stance by an inch for a choice of stance ranging from 40 to 42-inches in width. The heated seat? That’s nice to have, and a feature leaving you to wonder why you never had it before. 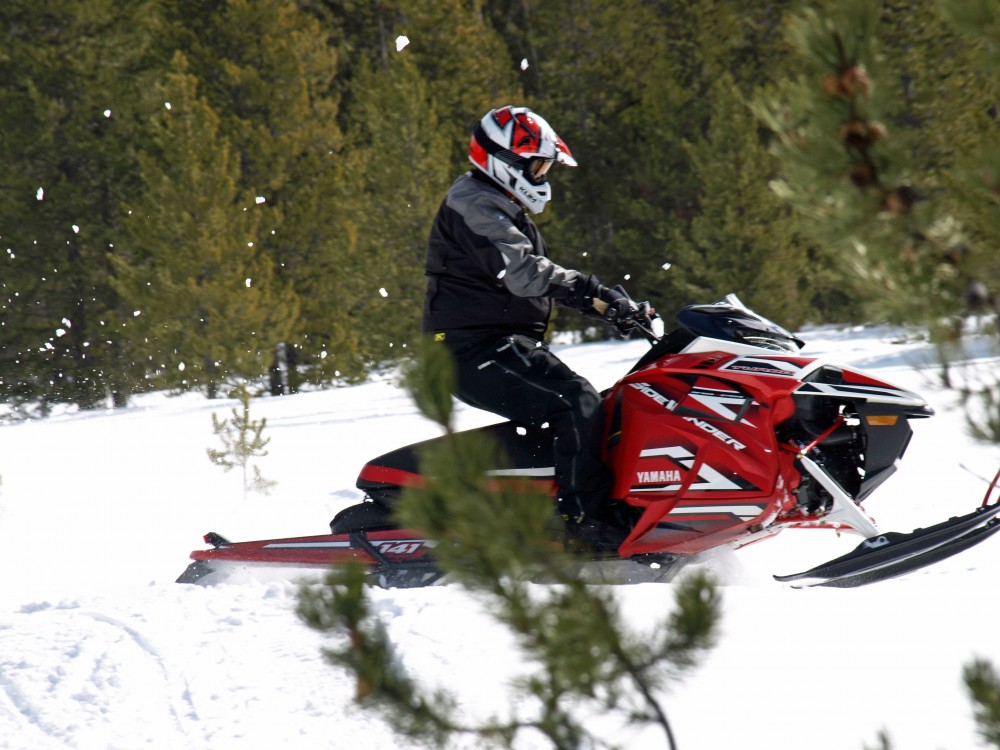 A quick jab at the throttle will get immediate ski lift to power over backcountry obstacles.

Based on the Arctic Cat XF off-trail platform, the Sidewinder X-TX LE spits snow thanks to the 2.25-inch lug pattern, which also lets you hook up off trail for play runs down unplowed back roads or climbing into backcountry hillsides. Don’t worry about power, this sled has excellent torque at just about any throttle setting. Heading home and need to make up time? Full throttle, full turbo boost and hold on. The Sidewinder X-TX 141 LE isn’t the fastest of the 2017 Sidewinders, but it will take your breath away and if you open it up crossing a lake, you’ll find the shore coming up pretty darn fast. Fortunately, the X-TX comes with a robust hydraulic action disk and limited engine braking to keep you under control. 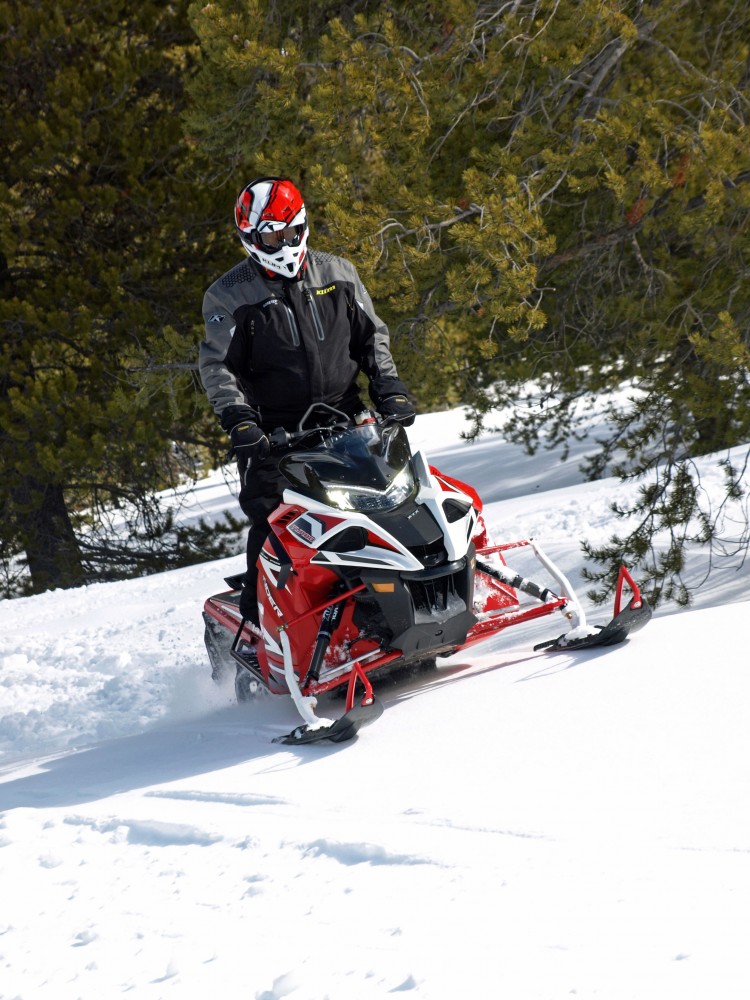 Between the sled’s 180 horses and bite of the 2.25-inch lugs on the 141-inch-long track, the Sidewinder X-TX 141is easily at home breaking its own trail.

Yes, indeed, Yamaha does get it. The company that brought you classic lightweight aluminum-bodied SRX racers and high revving Apex four-strokes just fired a salvo at the heart of the snowmobile performance market. Yamaha is serving notice that it aims to reclaim some performance sled market share.

With 180 horsepower on tap and performance tuned suspensions and a proven off-trail chassis, Yamaha has gone big and isn’t planning to stay home. So, be very aware that this is a serious sled for serious riders. Quiet, smooth, powerful, quick and fast. That sums up the 2017 Yamaha Sidewinder X-TX 141 LE.