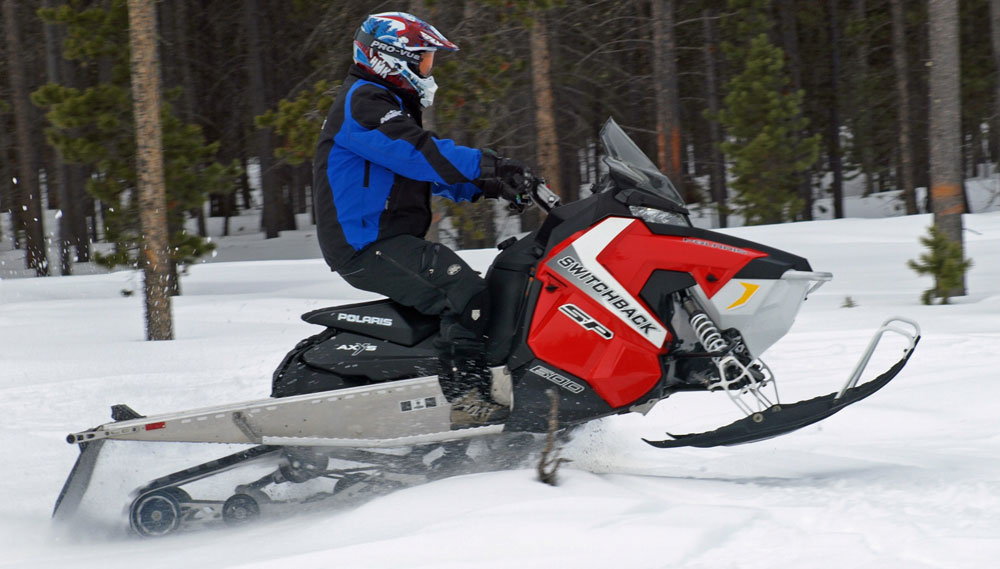 Is Polaris teasing the future?

We learned earlier this decade not to sell Polaris short. Despite some seeming engineering shortcomings and absolute and awkward failures transitioning from the trailing arm Indy era to the new AXYS and Number One selling Pro-RMK mountain sleds, Polaris carefully plotted an interesting and profitable future in snowmobiles and just about every other endeavor in which the company has chosen to compete. No longer the top selling brand in the world of snowmobiling as it was in the original Indy heydays, Polaris’ snowmobile brand is incredibly strong and its models both innovatively crafted and carefully positioned to offer big bang for the bucks.

No, we don’t question Polaris moves. While we don’t always agree or understand some of them, we’ve learned to sit back and watch how Polaris plays in the ultra-competitive world of powersports. In 2002, Polaris stock sold for less than US$16 per share. Today, even as stock prices have taken a recent dip, Polaris stock showed a 52-week high of US$156 per share and current price of more than US$90 per share. Despite the limited success of the Fusion 900 and its 750cc turbo powered sleds, Polaris recovered nicely to adopt features that worked and discard ones that didn’t as the company reinvented the way mountain riders attacked the powder and created an innovative flatland articulated suspension as well as reinvented the Indy line, which has become the company’s value brand.

Who are we to doubt the commercial prowess of Polaris, which sank its personal watercraft business in 2004 due to a shrinking PWC market, the company’s low market share in the business and the product’s lack of commonality to other Polaris products such as sleds, ATV or motorcycles? Since then, Polaris has launched new products that more than make up for the PWC losses. The ATV business expanded into Side-by-Sides and it was Polaris that launched the extremely popular and strong selling performance models like the RZR. The motorcycle group added the Indian brand to its portfolio, causing a bit of sales havoc for Harley-Davidson as being the oldest iconic brand name. Indian debuted in 1901; Harley in 1903. Plus, Polaris has enjoyed a successful launch of its three-wheeled Slingshot motorcycle product with its appeal to aging motorcyclists and new riders.

So, when Polaris decides to emphasize 2017 model year snowmobiles built around a new 144 platform and IGX 144 rear suspension, we tend to pay attention. The cynic in us would look at the new 144s and figure that these are repackaged powder sleds made to appeal to a broader group of flatland crossover riders. We suggest that we are partially correct, but as we listened to the Polaris presentations and revisited the data, we think we see a glimpse into the whiz-bang of Polaris marketing.

Let’s face it; powder riders are serious about getting out into the deep snows and making high marks, traversing sidehills and getting big air off a corniche. The RMK is built for that rider. And he wants power, a 600cc sled is a cute nice-to-have spare, but not what he wants for an everyday sled. That has to be an 800 – or more. Ski-Doo knows that – think 850cc twin. Yamaha and Arctic Cat know that – think 998cc turbo. Polaris accepts that as it emphasizes power-to-weight, a new 800cc Cleanfire two-stroke and a 400-pound dry weight. Polaris’ 800 Pro-RMK models are sleds everyone else is targeting. Few serious mountain riders care about 600cc mountain sleds. 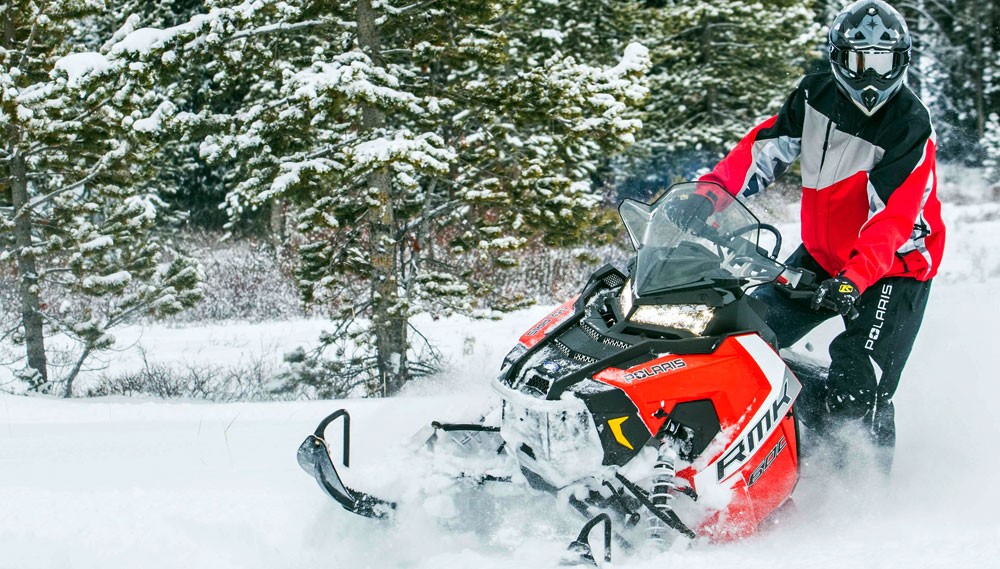 The 600 RMK 144 has full powder potential but it’s the 800cc version that serious riders buy.

Polaris knows that, but how do you sell long-tracked 600s? Reinvent the market and create a new niche. Enter the 144s. Of course, Polaris isn’t alone. Check out the other brands and see what’s new and what track it wears. This 144 thing isn’t new, but the experiment that plays as an Indy 144 on the older chassis has gone real-world with an all-new chassis and rear suspension. Plus, with a few tweaks, Polaris creates myriad models cleverly aimed at different riders, mostly deep snow wannabes but definitely riders needing versatility.

The Polaris 144s start with a revised, but new AXYS 144 platform that combines the off-trail agility of a powder sled with on-trail handling capabilities. The longer chassis flexes its muscles with a 144-inch track, be it one with a two-inch lug profile or the 1.35-inch Cobra design. The star player has to be the Switchback Assault, which can be ordered with either the 600cc twin or the full-on 800cc Cleanfire. This is Polaris’ backcountry runner and a big hit in heavy snow areas of the Midwest, Ontario and Quebec. 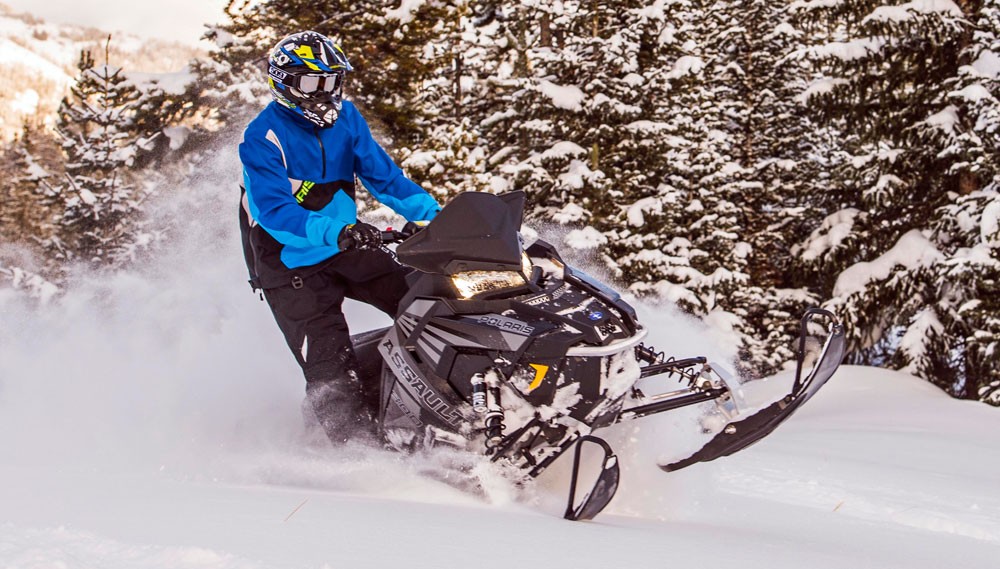 The backcountry rider wants the power to weight advantages that the Polaris 800 Assault 144 provides.

Designed as AXYS-derived models, all of the 144s were RMK-inspired for off-trail handling. Polaris views its 144 models as true 50/50 crossovers, which simply means that marketing research suggests the sleds will fulfill the buyer’s need for spending half of the riding time on trail and half off trail. These sleds can easily handle the frequent and often deep and wet lake-effect snows associated with the Great Lakes areas of Michigan, Wisconsin, Ontario and New York.

While the Assault tends to be recognized as the performance 144, we only partially agree as there is also the 600 RMK 144 for western play areas, but also two new versions that represent some clever tinkering by Polaris engineers. The new for 2017 600 Switchback SP 144 is similar to the Assault, but without the trick Walker Evans shock package. From there you add a standard rack, narrow the front to RMK standards and create the 600 Voyageur 144, Polaris’ 144 sport-utility version. 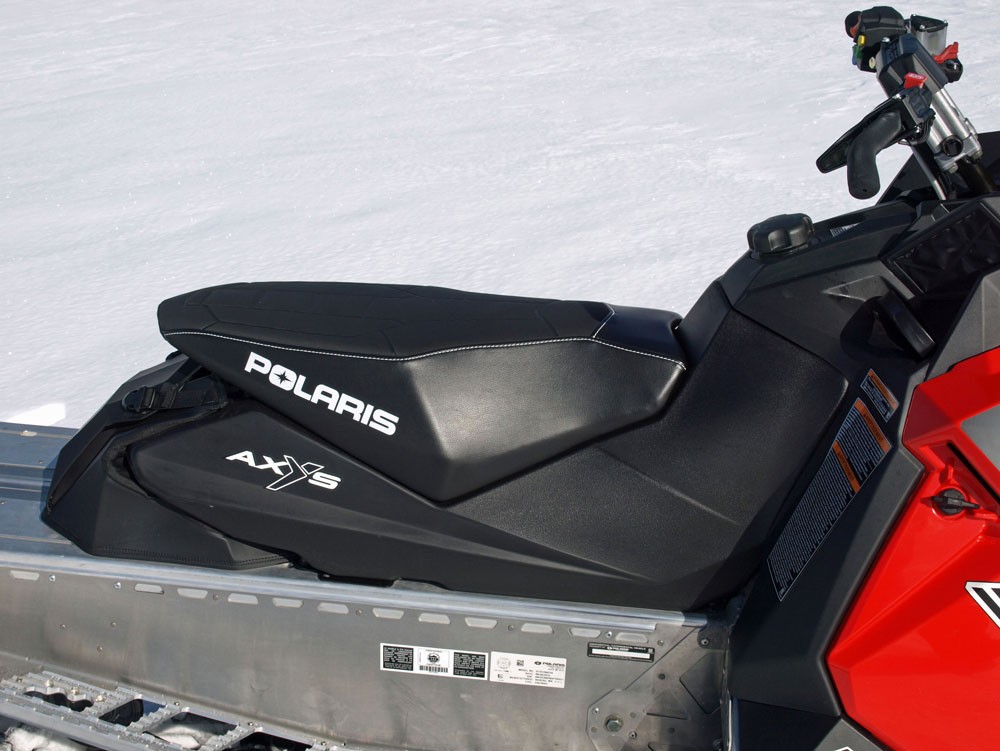 The ergonomics on the new 144 models includes a performance seat with cargo bag.

All of these sleds share the new Ideal Geometry Xover (IGX) 144 rear suspension that includes the same front torque arm geometry used on the AXYS Rush and Switchback 137 models. Polaris claims that this arrangement offers an increase of 43 percent more front arm travel compared to the previous RMK-based Assault suspension. The platform benefits from RMK-like PowderTrac runningboards to present a 56% open area for snow evacuation as compared to the runningboards on the Pro-Ride chassis. 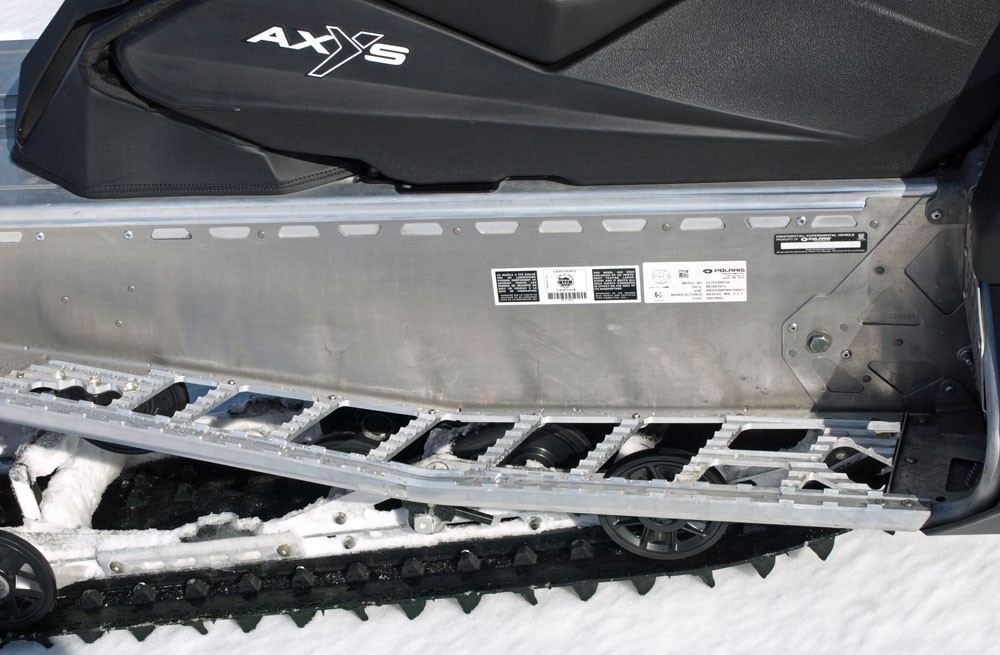 The new platform benefits from RMK-like PowderTrac runningboards that present more open area for snow evacuation as compared to the runningboards on the Pro-Ride chassis.

We understand that in model year 2017, the Polaris 144s will fly low on the radar as the new Ski-Doo Gen-4 850cc models and the Yamaha/Arctic Cat turbo sleds generate the serious buzz. Heck, even Polaris’ own new 800 Pro-RMK 174 will most likely garner more chatter than these 144s, but we admit to being very impressed with what Polaris has done. As we’ve ridden more and more of these 144-type sleds, we’ve found that overall they handle trails far better than we expected and can be counted on for extremely confident off-trail maneuvering. 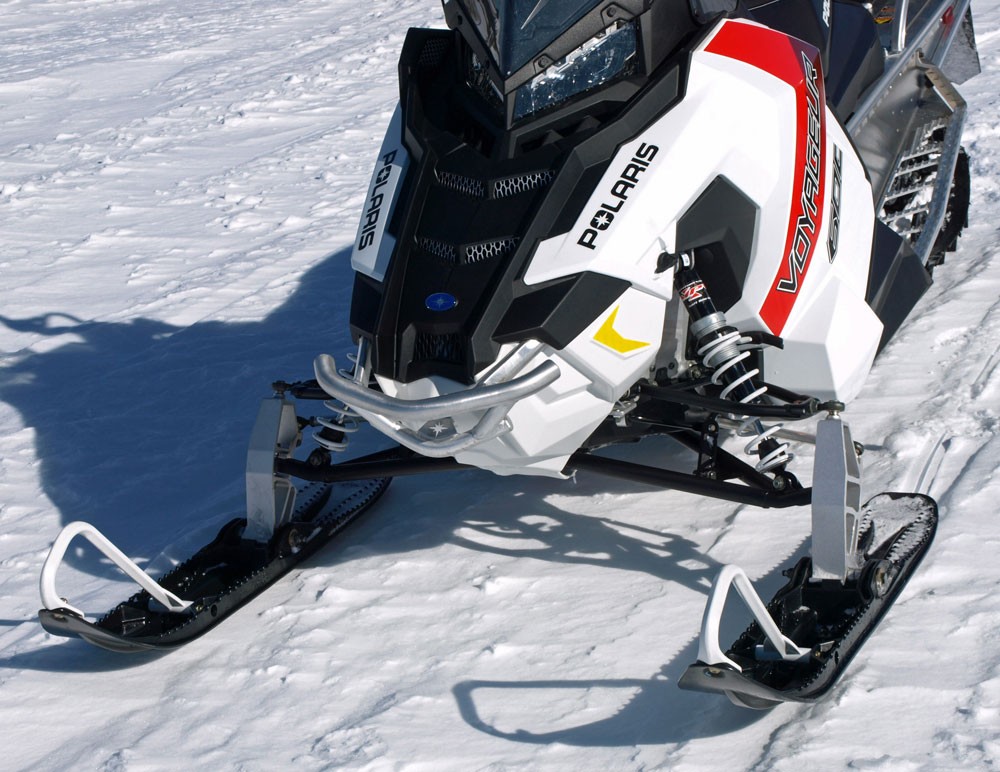 On its sport-utility 144 version, Polaris narrows up the 600 Voyageur 144 front end with an adjustable RMK-style front end.

We won’t be surprised if in the near future the 144s become the accepted standard for on/off-trail crossover models. With a slightly tipped rail beam, such sleds present a short-track footprint on groomed trails while offering a fuller footprint for off-trail traction. We suspect that Polaris recognized this development and has planned accordingly. This is exactly why we try not to underestimate the Polaris crew.