When Ski-Doo rethought how we actually rode sleds, the REV was born and the "status quo" was doomed

In the early to mid-2000s the snowmobile industry changed. Not overnight, but the industry power structure evolved with Ski-Doo reclaiming its position as the Number One selling snowmobile brand, a position it had held through the 1960s and into the mid-1970s. After a decade-long run of Indy successes Polaris grudgingly dropped to second place. In between the two had been Arctic Cat’s first place status, until bankruptcy wiped out those claims, and Yamaha’s post-Arctic Cat run at being the top player.

Times have changed and a look at two key sleds of the 2000s can help explain why and how Ski-Doo ousted Polaris.

After the introduction of the 1980 TX-L Indy, Polaris enjoyed great success with its proliferation of trailing arm front suspension Indy models. In this period, the Polaris Indy filled an incredible number of niches from all-out racing to two-up touring to full-on utility and even, youth sports. It was like Polaris could do no wrong. The Indy was an ever-popular product with a reputation for value and durability.

But, perhaps because the Indy was so successful and seemed to generate nearly automatic sales, Polaris diverted its attention from snowmobiles and focused resources — engineering, marketing and financial — on its new product, the four-wheeled Polaris ATV. While the Indy soldiered on with annual updates, Ski-Doo re-invented the snowmobile. Well, at least the way riders interacted with it. The Ski-Doo REV supplanted the Indy bringing over riders not just from older Ski-Dooes but many from Polaris, Arctic Cat and Yamaha. Ski-Doo engineers rethought how we ride and arrived at the rider-forward REV platform that allowed improved control, centralization of the sled’s mass and improved ride comfort. Its popularity boosted Ski-Doo to Number 1 in sled sales.

Since no other manufacturer had anything like the REV, they badmouthed it as being tippy, difficult to ride and so on. Polaris bashed the REV for its dual A-arm front suspension, totally unlike the trailing arm design on its Indys. Others pointed out the REV’s odd rider-forward seating position.

Indeed, there was Yamaha at the new sled introductions in those seasons with its all-new, first-ever high-performance four-stroke RX-1. It was a marvel. The sled’s inline four cylinder four-stroke came off Yamaha’s highest performance street bike. Repurposed for snowmobiling, the inline one-liter engine had been detuned a bit so the snowmobile clutches could live during full acceleration runs from idle to wide-open throttle. The RX-1 also featured an A-arm front suspension, Yamaha’s first. It was a marvel, but it was outdated as soon as it came off the assembly line.

The Ski-Doo REV was about to revise the industry with its rider forward design. What Ski-Doo engineers did wasn’t rocket science. They simply looked at how snowmobilers actually rode when they rode “hot.”

Ski-Doo engineers rethought how we rode back then. And they asked themselves if there might be a better way to ride, one that provided more control and more comfort. In studying how they themselves and their friends actually rode, they must have noticed how riders tended to pull themselves forward on the seat when riding fast through a corner or how riders tried to center their bodies and get their feet and legs to support them when riding moguls. So, they must have asked, “What if the rider sat farther forward and more upright?”

With the rider sitting more forward of the rear axle, centered and sitting more upright, he could move around the sled better to throw body leverage into corners, pop upright to get over bumps and sit more comfortably in the fulcrum of the sled’s front to rear action.

Ski-Doo broke out of the status quo with the REV. Initially the platform found its way to the MX series, but as more and more riders not only accepted this riding style but embraced it, Ski-Doo added the REV concept to more models. The Yamaha RX-1, despite its breakthrough drivetrain and suspension engineering, seemed old and out of date by comparison. The Polaris Indy was dated and Polaris recognized that they would have to make changes. Unfortunately that change was the Fusion, which dropped the Indy suspension in favor of, yep, that’s right, a double wishbone A-arm and a rider-forward seating position. But, by this time Ski-Doo’s REV models worked up to Number One in sales, putting an end to the Indy’s decade-plus run.

Ski-Doo took a gamble with the REV. The company felt it was an improvement if given a chance. But, snowmobilers are conservative when it comes to change. Nonetheless, the REV got its chance, proving to be very popular with snowmobilers. With that hurdle cleared, by model year 2005 Ski-Doo pressed forward with product, introducing a new REV-type chassis designed to handle a larger displacement and higher performance motor, the semi-direct injection Rotax 2-TEC 1000. The 2005 Ski-Doo Mach Z sported the company’s most powerful engine dropped into an all-new wider, longer REV platform developed for the serious high performance go-fast rider. There was even an RT-based mountain sled model, the Summit Highmark 1000. Polaris thought that it had caught up with Ski-Doo as it unveiled its model year 2005 product, headlined by an all-new Fusion for the trails and RMK for the powder. The sleds featured an all-new IQ chassis, which later evolved into a very dependable unit and underpinned various Polaris IQ models through last season. Yet, the high hopes for the Fusion and its new pieces couldn’t match the Ski-Doo Mach Z 1000. Plus, the remainder of the Polaris line, although referred to as Edge chassis models, was essentially viewed as Indys. Not that there as anything wrong with that as those models and the Indys predating them make excellent used sleds.

No, the tipping point for Polaris and Ski-Doo happened when the REV gained everyday acceptance and started replacing the Indy as the “must have” sled to own. By the mid-2000s all of the other sled manufacturers recognized that the REV-style ride-forward chassis had to be their future, they all needed time to get their REV-like products into production. Although Polaris struck out big time with the Fusion, the basic IQ chassis and its fuel-injected Polaris-built Liberty Cleanfire engines evolved nicely, making them competitive with Ski-Doo’s E-TEC two-strokes and REV platforms. But the damage was done and Polaris slipped. In the mid-2000s, Polaris thought its Fusion with IQ chassis, new A-arm front suspension and 900cc Liberty Cleanfire two-stroke twin would be able to battle Ski-Doo’s REV and its all-new Mach Z 1000.

Looking at the pre-Fusion Polaris models, which were contemporaneous to the REV, you’ll see once popular models that remained status quo in those early 2000s seasons. The 2004 Polaris XC SP trail performance models featured an “EDGE” rear parallel rail suspension and Indy front suspension. In a reaction against the REV, Polaris developed Pro X models that offered a special seat that “…positions the rider higher and further forward to better suit aggressive snocross-style riding.” But the chassis platform was the same EDGE tunnel and Indy bulkhead. These Pro X models mimicked the Ski-Doo MX performance gamut with performance two-strokes in 600cc and 800cc displacements.

The taller seating arrangement and a raised handlebar keynoted the Polaris effort to stem the success of the Ski-Doo REV series. With a strong head start, Ski-Doo pushed the envelope with not just the RT chassis to accommodate the brutish 1000cc two-stroke but a revised REV platform for MXZ models designed to further enhance the Ski-Doo position as Number One in sled sales. 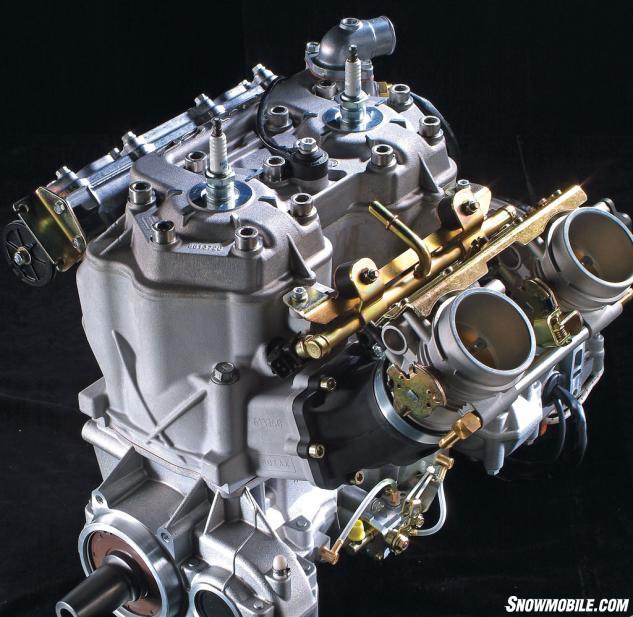 Had its dismal Fusion project not hampered the company’s sled growth, maybe Polaris had a chance to reclaim the sales lead by mid-decade. Regardless, now a decade later, Polaris and Ski-Doo once again are battling in the marketplace with significantly improved product. Polaris’ new lighter weight AXYS trail models and its popular Pro-RMK powder sleds evenly battle Ski-Doo’s MXZ and Summits. Still, Ski-Doo maintains the overall edge that it gained with the original REV back in the 2000s.

As for Polaris, it may have taken its eyes off the Number One sled sales prize in the early 2000s to work on its ATV products, but the end result of those efforts worked out quite well as Polaris “wheelers” represented 67 percent of the company’s total 2013 annual sales of US$3.8 billion.