Although the 24-year-old factory Arctic Cat rider from Goodridge, Minnesota, has enjoyed success at Duluth in the past, he has been somewhat snake bitten. Last year, he won the Pro Open race, but a bobble in Pro Stock took him out of the running and thwarted his efforts to rack up wins in both Pro finals, but not this year.

As he swept the Pro classes and notched up the 39th and 40th pro career wins, Hibbert set another milestone in his career. While the Pro class sweep was a remarkable achievement in itself, the way in which he did it was more impressive. In each race, he quickly made his way to the front, reeled off a number of blindingly quick laps and then controlled the races with restraint and savvy. As a result no rider ever mounted a serious challenge the entire weekend. 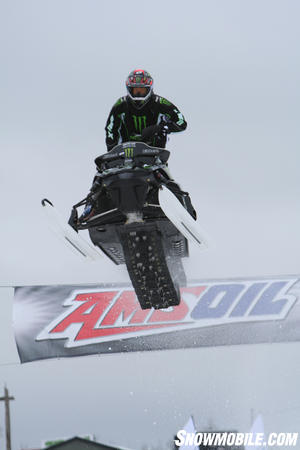 Tucker Hibbert airs it out over the front straight tabletop jump in Pro Open.

In Pro Stock, he bolted out of the gates to establish an early lead. Once in the lead, Hibbert settled into a quick, consistent pace and never allowed second place finisher Levi LaVallee to close the gap. At the finish line, Hibbert took the win with a five-second advantage over the Polaris pilot.

When the green flag flew for the Pro Open final, Hibbert once again grabbed the early lead and strung together a series of very quick opening laps. Polaris’ TJ Gulla gave chase to Hibbert in the early going until the Vermont native made an uncharacteristic mistake and dismounted. Once Gulla’s chase evaporated, Hibbert established an insurmountable lead. At the checkered flag, T-Train had put about a half a lap between himself and second place Ryan Simons, also on an Arctic Cat.

After the race, Hibbert said, “I am excited that I finally got a good weekend at Duluth where I was able to put in two good main event wins. In the past, I’ve won one class and then had bad luck in the other class.”

One of the biggest and most recognizable changes was the switch from WPSA to the newly reformed ISOC group. Under the ISOC banner, the Spirit Mountain race had a new format, longer race distance, and a larger track with a downhill loop. Last year, the race format saw racers in most classes running multiple round robin races in 7 lap heat races. The new ISOC format features three heat races for the Pro classes, and from these 15-lap heat races, the top three finishers advance directly to the finals. Riders finishing outside the top three would go to one of two 15-lap Last Chance Qualifiers (LCQ) races with the top three moving on to the final.

The longer races on the larger track deemphasized the importance of the holeshot, allowing riders to drive from back in the pack to the front and putting a premium on fitness. In year’s past, racers had to be in superb physical condition to compete at the front, but this new format of 15-lap heat races and a 30-lap final require even more stamina. If riders didn’t have the strength or endurance to handle the length of the new races, they faded in the later stages.

In my 15 years of attending this race, Hibbert’s performance was one of the consistent, measured and brilliant race performances I’ve ever witnessed, but we’ve already covered that. HJ Racing’s Ryan Simons was another Arctic Cat rider who rode brilliantly over the course of the weekend. While Simons has struggled in the past to find early season form at Duluth, he turned it around this year. 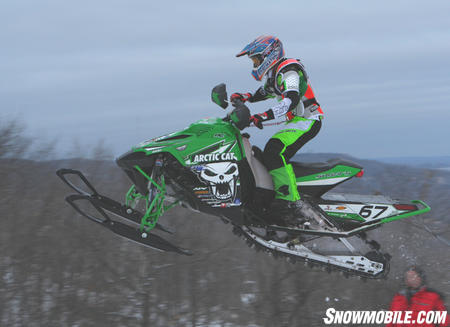 Starting in mid-pack in the Pro Super Stock final, Simons clawed his way to the front, picking off riders one by one to finish third. In the Pro Open final, Simons bolted off the start line, slotted into third and put a comfortable gap over Hentges Racing’s Ross Martin. When Gulla came off his sled, Simons inherited second place and held that position all the way to the finish. Overall, Team Arctic Cat’s new Sno Pro 600 delivered solid handling and performance that was reflected in the weekend’s race results as Arctic Cat enjoyed the most success. In all, Arctic Cat posted 6 wins and 26 other top five finishes in the 13 classes run during the weekend.

Ski-Doo had pinned high hopes on its revamped MX Zx 600RS race sled and its new lineup of Pro riders. However, Ski-Doo riders had a tough time trying to match the pace of the competition. “Monster” Mike Schultz rode well in his heat races, finished seventh in the Pro Super Stock final, and was the only Ski-Doo in the top 10. Teammate Mathieu Morin got a strong start in Pro Open. Unable to close on Ross Martin or Arctic Cat’s Brett Turcotte ahead of him, he finished fifth as the top Ski-Doo rider. Schultz soldiered through the Open final and took eighth as the only other Ski-Doo in the top 10.

Former Pro Stock and Pro Open Champion Robbie Malinoski had a much tougher weekend. A lot is expected from the Boss Racing rider, and Malinoski struggled the entire weekend. In fact, he failed to qualify for the Pro Super Stock final. And in his Pro Open qualifying heat, he crashed in the small downhill loop called the “Abyss,” forcing him to qualify for the final through the LCQ. But in the final, Malinoski rolled his sled on the back straight very early in the race. Arctic Cat’s Carl Schubitzke couldn’t avoid the downed sled that was sitting between two whoops and landed on the Ski-Doo. Both riders were done for the day. With the exception of the 120 class, Ski-Doo scored victory in 4 class finals and posted 12 other top five finishes. 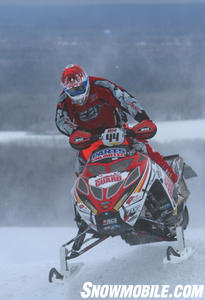 TJ Gulla kept Tucker Hibbert in sight during the early stages of the Pro Open final, but Gulla crashed and eventually finished 9th in the final.

As mentioned, Gulla kept pace several seconds behind Hibbert in the Pro Open final until a miscue sent him off his sled. Martin, who led Tucker Hibbert in a Pro Open qualifier, started the Pro Open final in the top five. He eventually worked his way into third position but was not able to make any inroads on the lead that Hibbert and Ryan Simons had established. For the race weekend, Polaris posted 3 class wins and 14 other top five finishes, not including the 120 final.

When Robbie Malinoski piloted his Yamaha Pro Open sled to a historic win at WPSA Brainerd in 2007, many had expected Yamaha to build on that success and develop a very competitive race sled. At Duluth, Yamaha’s raspy four-stroke RTX SE based Pro Open sleds created a lot of attention when they hit the track, but riders aboard didn’t have the control and handling to run with the top pros on the long, challenging track. Team riders Steve Taylor and Iain Hayden were constantly on and off the throttle as the Yamahas navigated the bumps, finishing at the back of the pack in heat races. Team Yamaha’s blue sleds certainly showed motor as Taylor briefly surged to the front during one heat race. Taylor and Hayden finished outside the top three in their heat races, transferring into the LCQ. Taylor put up a tough fight in the LCQ, finishing fourth and missing the last transfer spot to the final. Ian Hayden came in sixth, missing the final as well.

As in year’s past, the Spirit Mountain snocross reveals which teams and sleds have made the biggest strides forward in machine technology and preseason testing. Also, this first race often demonstrates which teams have found the initial setups or carried over the best combination from the previous year.

Often by the second or third event of the season, the teams, racers and manufacturer personnel have sorted out the new machines. The riders and sleds that will dominate for the rest of the season are apparent as well. Since Tucker Hibbert will run the first four ISOC Nationals and the X-Games, it would be a risky endeavor to bet against the T-Train as long as he is around.