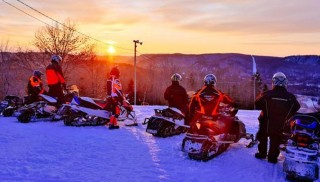 I got the news that the Sault Trailblazers from Algoma Country had won the Early Season Power Tour contest some time in January. We had all heard about the contest organized by SledDealers.ca, Ontario Tourism and Yamaha Motor Canada at the last Snowmobile general meeting, and more than a few clubs and districts were taking this contest very seriously.

Seeing that the Trailblazers were from my district, I was obviously rooting for them. We’d heard that the Cochrane Club was working hard to win, and the Highlands clubs are always poised to take advantage of their position in the snowbelt and often get their trails open before anyone else.

In the end it was the Sault Trailblazers who took advantage of early snow. They fought against daily breakdowns of grooming equipment and worked their butts off to grab the prize with more than a day’s worth of riding open on December 4th, 2014.

As luck would have it, I received an invite to join the club on this amazing ride. I wanted to ride with the club to congratulate them, but also to experience what riding with this many club members would be like. These guys are more involved with keeping the trails up and running than doing big group rides – this was a rare opportunity. 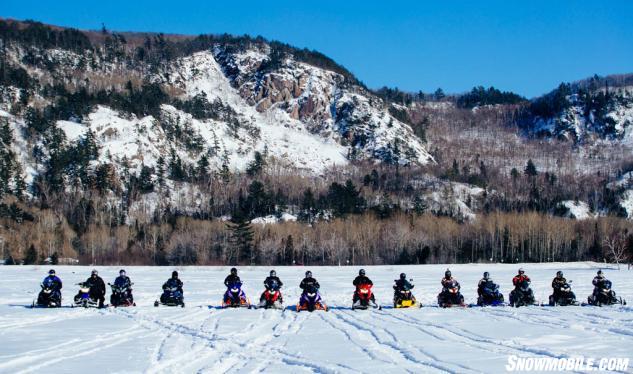 The Sault Trailblazers on Lake Superior

I also wanted to shoot some cool videos with my new GoPro camera and to top it all off I am a first-time owner of a Yamaha sled, so I was excited to meet the people from Yamaha and check out the new sleds they were bringing.

I got things ready, as every snowmobiler does before leaving for a trip. Trailer? Check. Sled? Check. Sled cover and tie downs? Check. Gear? Check.

I headed out on the road to drive scenic Highway 17 south of Wawa to the Sault. If you love snow the way we do out here, you’ll see plenty of it on this route. Lake Superior Provincial Part and the surrounding area gets crazy amounts of snow. The snow banks were already as high as my 4×4 truck and it was only mid-February. There is still lots of winter left here. 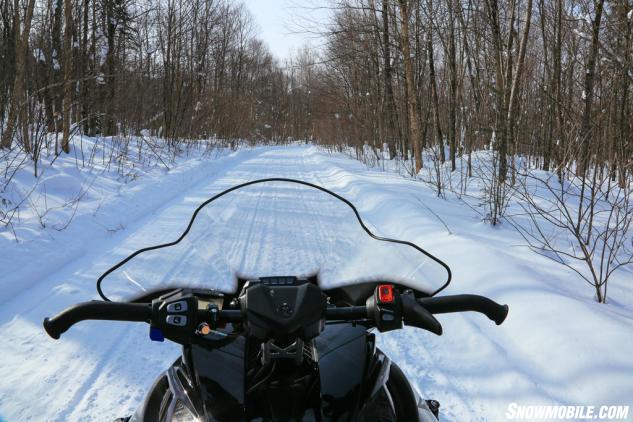 We were looking forward to this view of the trails from the cockpit of a Yamaha Viper.

I made it to Sault Ste. Marie safe and sound, found my way to the Farifield Marriott quickly as it’s located conveniently in the north end of town near the new Sault Area Hospital. I checked in my room and parked my truck in the back, where there was plenty of space for trucks and trailers.

After settling in, I did the usually social media updates on my blog and Facebook page and headed to Boston Pizza located right across from the hotel, so close that I didn’t even have time to get cold even though temps were around -20C. By the time I arrived most of the group was already there, including representatives from the Sault Trail Blazers, Algoma Snow Plan Affiliation (the district club association), OFSC District 13, and more Soo club members. 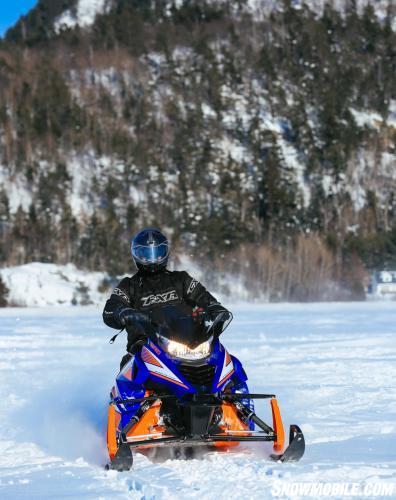 The snowmobile trails in Algoma offer some breathtaking backdrops.

We ordered our dinners and started talking about snowmobiling – a conversation that continued well into the evening. We can’t help it; we live for our sport. We were good boys and headed to bed…early. The next day was going to be a great, full day of riding. 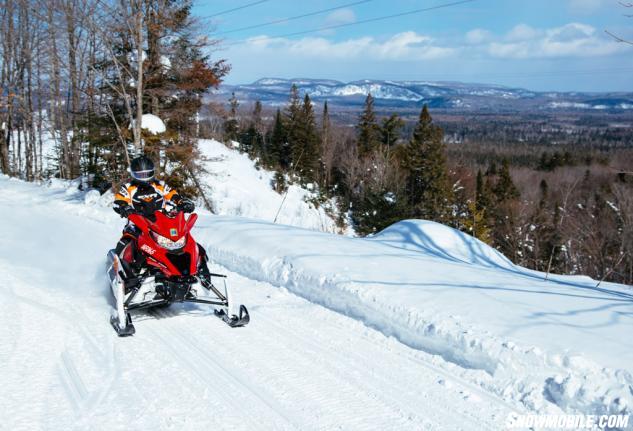 It is views like these that keep snowmobilers coming back to Algoma.

The next morning we got up and headed to Premier Yamaha in Sault Ste. Marie and met up with the rest of the crew. The Yamaha Motor Canada crew was there ready to ride the two days with us and they brought their toys to share, too.

We unloaded at the snowmobile staging near the baseball fields; it’s a huge area that is perfect for staging. Aside from easily fitting the dozen trucks and trailers there that day, it’s a pretty safe spot. We left there and headed down the trail where we rode out of town, passing under Highway 17 through a tunnel built for snowmobiles. 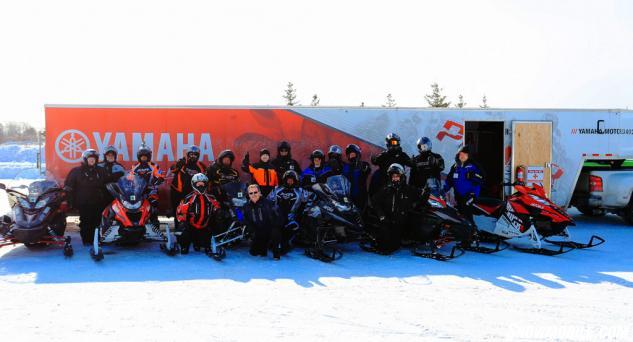 Big thanks to Yamaha Motor Canada!

We hit some great powerline trails with spectacular views. We stopped a few times to take some pictures and videos before heading down to Havilland Bay where we stopped to eat at Roxy’s Restaurant located on the shores of Lake Superior. After the perfect meal following a morning of sledding, we headed out on Lake Superior. This is such a great place to ride as not everybody has a chance to experience a ride on Lake Superior – and of course we grabbed a couple of shots of the group playing with the new sleds on the lake.

Almost everyone agreed that the Viper and Apex were the group favorites, but more than a few said they’d love to have a Phazer in their garage. Of course, several wanted to be on the Venture by the end of the trip.

Our next and final destination for the day was Searchmont Ski Resort where we spent the night in their spacious chalets. We followed the trail onto one of the most scenic portions I’ve seen anywhere in Ontario. This section of trail is called Robertson Road; the trails wind along a lake and massive cliffs show themselves behind the hardwood forests. Pictures hardly do this place justice. 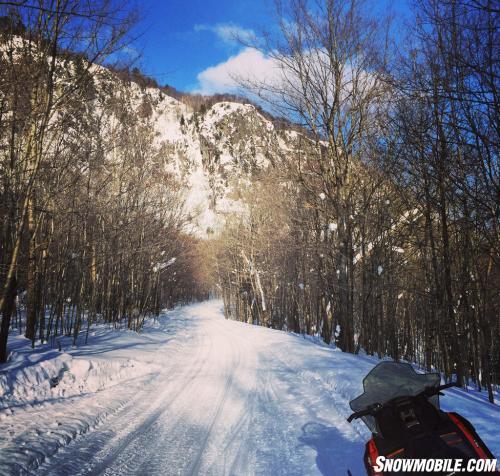 We arrived at a spot I’d heard about for many years – Coops Crossing. I’d seen tons of pictures but I never thought I’d have the chance to ride it. This spot is amazing. A steep hill with a bridge at the bottom goes up again and drops down a second time on the other side. I’m amazed that they can take a groomer up that section of trail and still groom the trail to the perfection we saw that day. 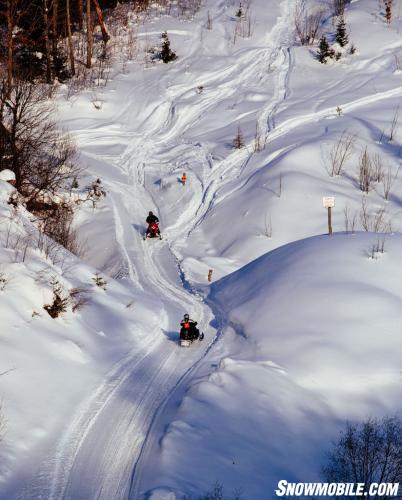 We arrived at Searchmont just under an hour later, and, as the hill is closed on Tuesdays, we had the place to ourselves. We parked the sleds and went inside and shortly heard that the resort would allow us to ride to the top of the hill with the groomer. When I heard that I jumped to the occasion to go up to the top with the other riders; I had never done this and wasn’t going to miss this chance. It was a fun ride on the way up, as we hit some small jumps; it was a real thrill. 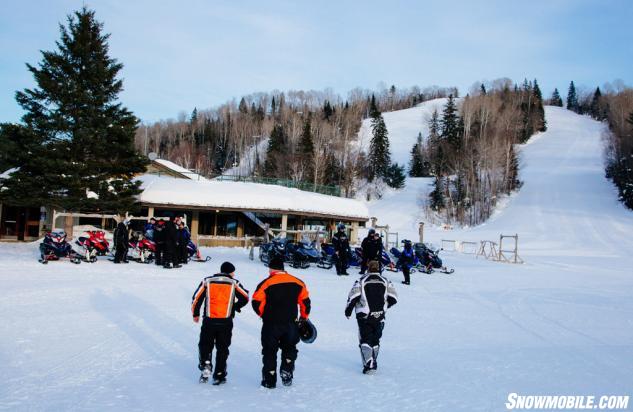 At the top I met up with the rest of the group and we couldn’t have timed it any better. Just as we got to the summit the sun was beginning to set down over the hills, providing a backdrop for the most epic pictures of the whole trip. 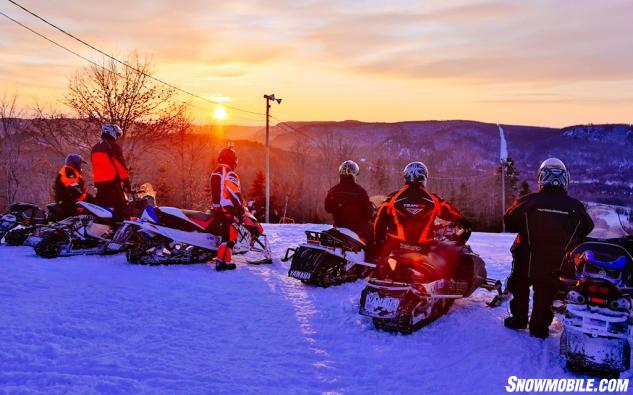 Sunset from the top of the Hill

We headed back down and soon dinner was served at the main lodge that blew our minds. We’re used to eating at trailside diners, but this was a totally different level. It really showed the resort knows how to cater to snowmobilers.

After dinner the team from Yamaha gave a quick speech about how much they enjoyed the ride and how much they valued the hard work of the clubs. And then they started handing out prizes. First stuck and Worst stuck ended up being the same guy! Best air time on a touring sled….guess who got that one? Yup – me.

The next morning we had a great breakfast, filled up with gas and headed out on our way. It was a cold morning, in the shadow of the massive mountains in this area. Many riders had their shields freezing up, and my iPhone kept freezing up on me so I couldn’t get as many pictures as I wanted. On the other hand my GoPro worked flawlessly in the bitter cold temperatures. GoPro one, iPhone zero. 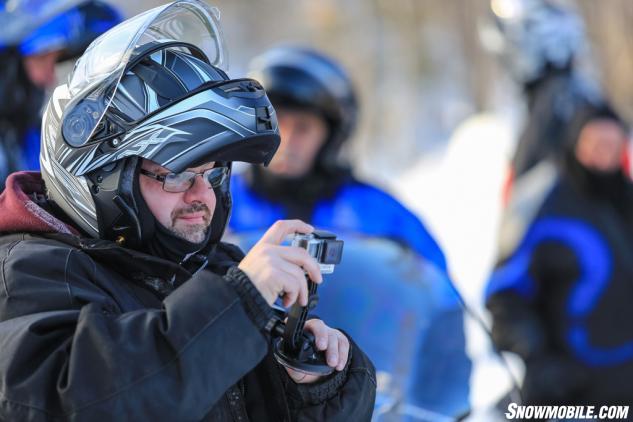 We rode the D trail back to Sault Ste. Marie. Over the years I’ve often seen pictures of a snow covered outhouse on this trail showing off just how much snow this area sees every year, and I was lucky enough to cross seeing it in person off my bucket list! LOL.

We rode down this beautiful twisty trail for about an hour, then the trail opened up more. The sun was starting to shine more and it was finally getting warmer. We rode on, the Sault club members enjoying the fruits of their labor – riding great trails and taking turns riding each of the new Yamaha sleds. They were having a blast. 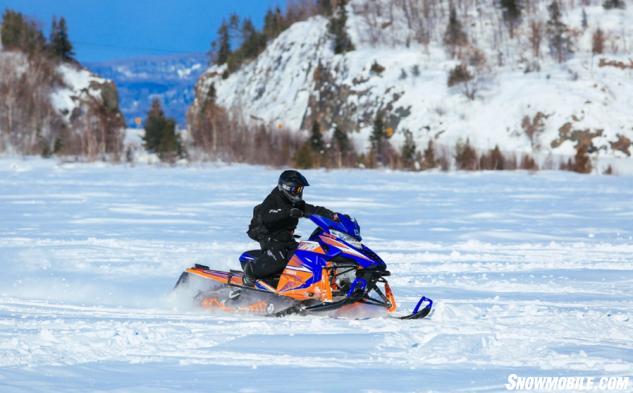 The Viper SR from Yamaha was a group favorite

We got to the city and headed to Gino’s restaurant and had one last meal as a group. Not long after, we were loading up the sleds and saying farewells. It was time to head home.

I got home safely and I was happy to have been part of this event. I came home with a huge boost of energy. Spending three days with a bunch of sled nuts was just what the doctor ordered. I only wish it could have been longer. The Sault Trailblazers have an amazing and diverse trail network and a vast territory to cover with some very difficult areas to groom. With the old equipment they have and the steep terrain they have to cover, I don’t know how they manage to keep the trails so smooth and flat for riders every year. 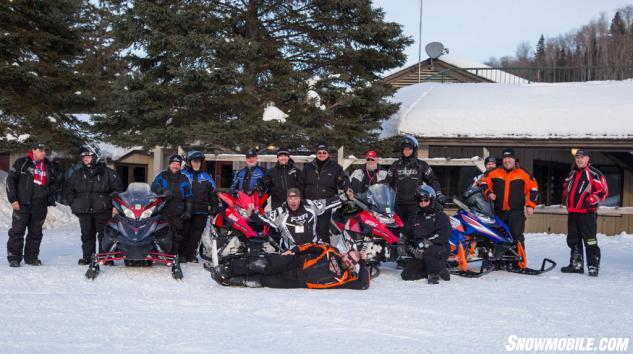 My hat goes off to those groomer operators and all the club volunteers. I’ve never ridden with anyone more deserving of this award. I can only echo what so many of us heard on the trails over those two days – the trail system here is truly something special and needs to be experienced to truly understand. Two days of riding in Algoma just isn’t enough!

For Information on Sledding in Ontario, check out http://www.gorideontario.ca/ For all the options for sledding in this region, visit sled.algomacountry.com For trail permits and trail maps, go to http://www.ofsc.on.ca/ To check out some of the amazing Yamaha sleds we rode,visit http://www.yamaha-motor.ca/products/?group=SM And finally, if you’re buying a new or used sled, check out http://www.sleddealers.ca/. They helped setup this whole tour!